Police found the victim’s manhood at the house and sent it to the hospital for reattachment.

Was it succesfully reattached? No news at all.

No new is good news?

My rights violated, says wife who cut off penis

KUALA PILAH: A woman, accused of cutting off her Pakistani husband’s penis, was not told she could consult a lawyer before police questioning, said her lawyers.

As a result, Fatimah Abdullah, 51, admitted to the offence on Jan 29 and faced a maximum 20 years in jail.

Yesterday, on the advice of her lawyers, she now pleaded not guilty to the charge of causing grievous hurt to her husband with a straight razor at their home in Batu Kikir here on Jan 20.

The 44-year-old man was sleeping at the time of the alleged attack which was purportedly over his weird sexual demands on her.

Shamsher Singh, one of the three lawyers for Fatimah at the Sessions Court here, said Section 28A of the Criminal Procedure Code clearly spells out that anyone arrested by the police has the right to consult a lawyer before questioning or having a police statement recorded.

“But in Fatimah’s case, this was not done.

“She was arrested and immediately produced in court on Jan 29 where she pleaded guilty to the charge without even consulting a lawyer,” he said.

Fatimah, who has five children from a previous marriage, had also allegedly told police that she slashed her husband, Umar Rahman, because she couldn’t endure his “strange sexual demands”.

She purportedly claimed that she had been tolerating this since their marriage in 2014.

KUALA PILAH: A 51-year-old woman who had pleaded guilty to slicing off her 44-year-old husband’s manhood and was supposed to have been sentenced on Monday morning surprised the court when she changed her plea.

Fatimah Abdullah, who had pleaded guilty to the charge on Jan 29 told Sessions Court judge Sazlina Safie that she would now contest it.

Clad in a yellow tudung and floral baju kurung, Fatimah who was unrepresented when she pleaded guilty was this time presented by three lawyers led by Parmjit Singh.

Fatimah was charged with using a shaving knife to slice off Umar Rahman’s penis at their home in Batu Kikir at 1.30am on Jan 20.

Fatimah, who has five children from a previous marriage, had earlier told police that she committed the act because she could no longer endure Umar Rahman’s “strange” sexual demands.

She claimed she had been tolerating it since their marriage in 2014.

Woman in Malaysia cuts off husband’s genitals – because she couldn’t endure his ‘strange’… http://bit.ly/1QJto9h 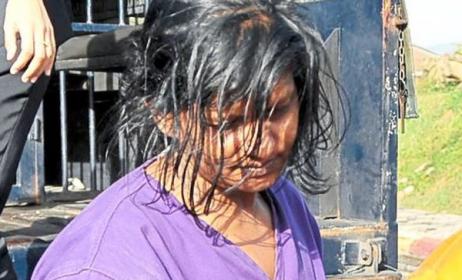 Fatimah Abdullah made the plea when the interpreter indicated the charge against her before Judge Sazlina Shafie.

Fatimah was charged with committing the act at a house in Batu Kikir, Jempol at 1.20am on Jan 20.
…
Sazlina set Feb 22 for sentencing pending the victim’s medical report.

Woman who cut off husband’s penis had wild sex

A 51-year-old wife of a Pakistani man, who reportedly cut off her husband’s penis on Wednesday, has bruises all over her body believed to be caused by violent sex, reported Kosmo!.

Jempol OCPD Superintendent Noorzainy Mohd Noor said police believed that the incident occurred on the night after the couple had aggressive sexual intercourse at their home in Batu Kikir, Jempol.

The 44-year-old man, who woke up when he felt an excruciating pain in his groin, was shocked to see his penis severed. The man was then taken to the Kuala Lumpur General Hospital for surgery to have his penis reattached.

The woman is believed to have five children with her past husband and had converted to Islam after she married the Pakistani man.

She is believed to be under depression due to abuse and ended up cutting off the victim’s penis. 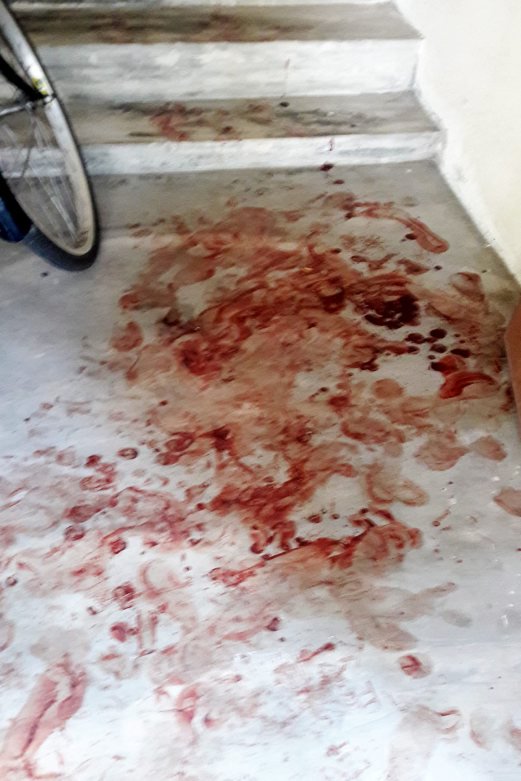 JEMPOL: A woman sliced off her Pakistani husband’s penis using a razor blade early this morning, claiming she was irked by his “weird” sexual habits.
The 51-year-old wife, who married her 44-year-old husband in May last year, committed the act at about 1.30am while the victim was asleep.
Jempol district police chief Superintendent Noorzainy Mohd Noor said the incident took place at the couple’s home in Batu Kikir.
“The woman cut off the victim’s penis using a razor blade. “The victim, who worked as a trader, escaped from the house and sought the assistance of police at the Batu Kikir police station at about 1.55am.
“Police were shocked by the sight of the bleeding victim, and sent him to Jempol hospital for treatment. Police found the victim’s manhood at the house and sent it to the hospital for reattachment,” he said when contacted.

Noorzainy said the victim was stable now and had been referred to the Kuala Lumpur Hospital for surgery.