Zahid: Altantuya’s immigration records were not deleted but kept secret…

Home Minister Ahmad Zahid Hamidi says that the Malaysian immigration records of murdered Mongolian national Altantuya Shaariibuu had not been deleted, as was alleged previously. They had been kept secret.

PARLIAMENT Murdered Mongolian national Altantuya Shaaribu’s immigration records were not revealed to the public for eight years because her murder case was on trial, Home Minister Ahmad Zahid Hamidi said.

“The records became trial documents and there was no need to reveal it to the public for as long as the case was on trial due to concerns that it would disrupt the case.

“It was only revealed after the trial ended in the Federal Court,” Zahid, who is also deputy prime minister. said in a parliamentary written reply last Thursday.

He was responding to a question from Gooi Hsiao Leung (PKR-Alor Setar) on why the Home Ministry waited until December 2015 before confirming that Altantuya’s immigration records were not erased.
.
The confirmation by Zahid came more than eight years after Altantuya’s father Setev Shaariibuu queried about the missing entry records.

The allegations first emerged during the trial of Razak in June 2007, based on the testimony by Uuriintuya Gal-Ochir, a friend of Altantuya.

This is what the late Karpal Singh told reporters at the time: “It is a very pertinent and significant issue because if any attempt was made to show that Altantuya never entered the country and therefore could not have been murdered, then I think the police ought to investigate why.”

Altantuya’s entry records not deleted – show us the proof 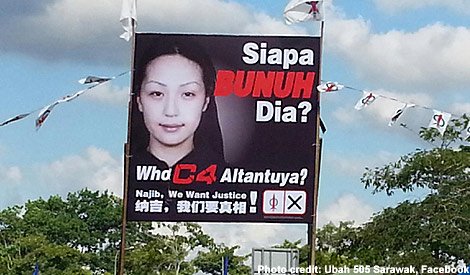 YOURSAY | ‘Zahid has achieved nothing, if not notoriety, with this revelation.’

It is as if the immigration records were in stacks of dust-gathering papers or cards put away in a store room, and immigration officers had been searching high and low for that small piece of paper in the last 10 years.

What happened to all the computers in the Immigration Department?

Victor Johan: Previously, there were allegations in the court that the immigration records of Altantuya Shaariibuu were deleted by unknown individuals in 2006.

During the last parliamentary session, Indera Mahkota MP Fauzi Abdul Rahman queried in the Parliament whether the police have probed into the claims of the deleted immigration records, as well as the status of the probe.

Are we expected to believe this tale?
…

Pemerhati: Common sense will tell you that when the accusations of missing records were repeatedly made over the past several years, they would have been immediately denied by the authorities if the allegations were false.

The long delay of about eight years in the denial strongly indicates that Zahid is lying just as he was lying about meeting PM Najib Razak’s RM2.6 billion ‘donor’. To try and make that lie more convincing, he said he had seen a cheque for a huge sum of money.

But since such huge sums are transacted through electronic transfers, that cheque story strongly indicated that the whole ‘donor’ story was untrue.

Zahid now must have thought that he could lie on this matter because no one would dare to contradict him and tell the truth and no outside party will be allowed to check and find out if what he says is true or false.
…

Peacemaker: Information is only useful if it is timely and accurate. The home minister has achieved nothing, if not notoriety, for the executive to reveal this piece of information now when the trial is well and truly over – and with one of the convicts having safely ran away to Australia.

If Zahid thinks he has scored a point, I’d say it definitely looks like an own goal.

“With that, there is no such issue as the (immigration) records being deleted by anyone,” Zahid (photo), who is also deputy prime minister, said in a written parliamentary reply.

This was in response to a question asked by Indera Mahkota MP Fauzi Abdul Rahman, who queried whether the police have probed into the claims of the deleted immigration records, as well as the status of the probe.

The home minister’s reply answers previous allegations that the Malaysian immigration records of Altantuya had been deleted by unknown individuals.

LAWYER Karpal Singh is surprised that both the prosecution and defence had wanted to expunge the evidence on the missing Immigration records of Altantuya Shaariibuu and her two Mongolian companions.

The veteran, who is acting for the family of the murder victim, said the matter was very serious and a report should be lodged so that an investigation could be carried out.

“It is a pertinent and significant issue because there was an attempt to make it seem as though Altantuya had never entered the country and could not have been murdered here.

“Police should investigate who the culprit was and why Altantuya’s name was obliterated,” he told reporters outside the courtroom yesterday.

On Tuesday, Uuriintuya Gal-Ochir, Altantuya’s friend who came here in October with her, testified that she was not allowed to leave the country by airport authorities in November because there was no record of her having entered Malaysia legally with the deceased and the deceased’s cousin Namiraa Gerelmaa.

Uuriintuya also alleged that the record of their departure from Beijing in October was also missing.
.

Like Loading...
This entry was posted in Uncategorized and tagged altantuya, altantuya immigration records. Bookmark the permalink.