Collecting tuition fees ‘along’ style? Centre now says, “We did it, so sorry…”

Posted on October 4, 2015 by weehingthong

Shame! Shame!
All the Singaporeans know our name! 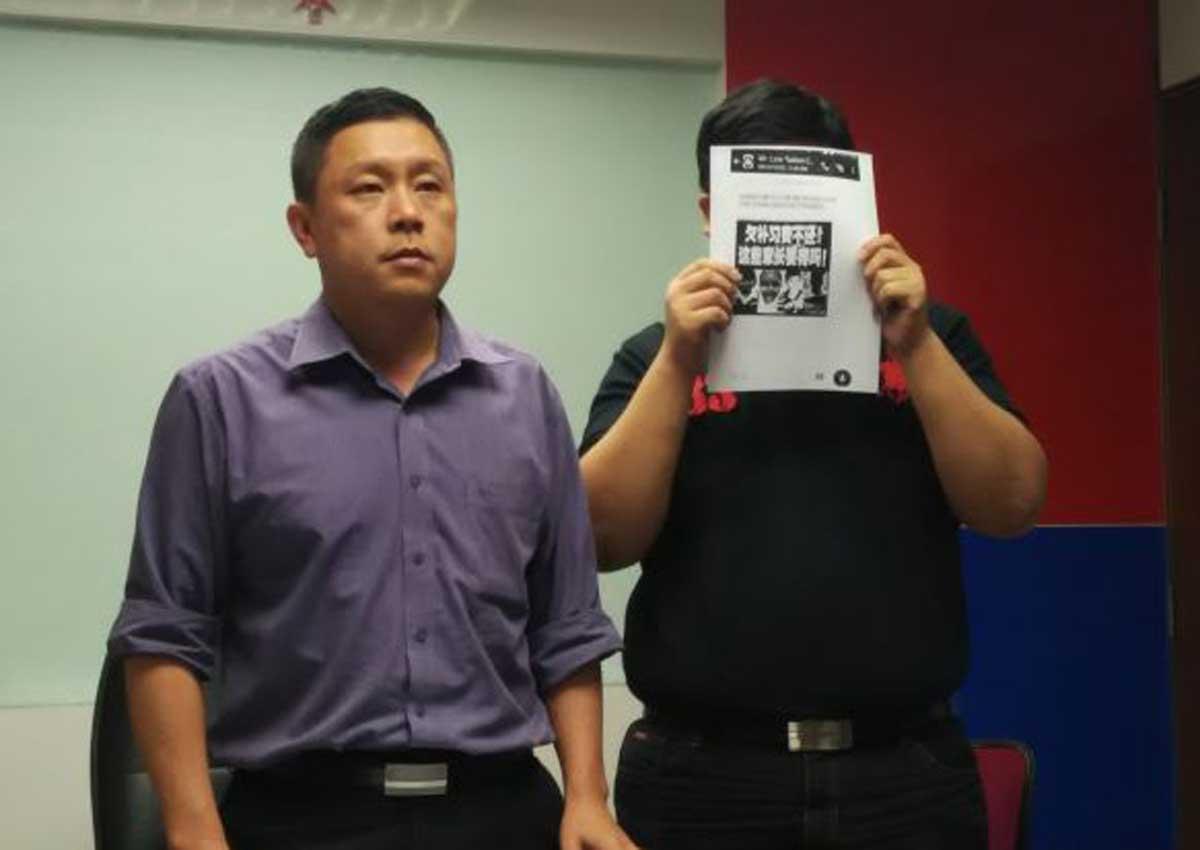 Balakong assemblyman Eddie Ng (left) with the operating manager of the tuition centre.
Photo: The Star/ANN

CHERAS – A tuition centre in Sungai Long has apologised after they put up posters in Cheras, Sungai Long and Kajang “shaming” parents for not paying up the fees.

The operating manager of the centre, who only wanted to be known as Low admitted that they went ‘overboard’ but stressed that the public apology is only for the kids and not their parents.

“We took such an action because we wanted the parents to pay or at least explain why they cannot pay.

“One week before we posted the banners, we warned them via calls and SMS but the parents did not respond,” he said to reporters at DAP’s Balakong Service Centre in Cheras on Tuesday.
…

“So many times we have asked for money. As teachers, we try to help but these people take advantage of us. Sometimes our salaries get cut because we try to help them,” he said adding that many students have quit the centre because the parents were not confident with them.

Balakong assemblyman Eddie Ng said he took up this issue when the public alerted him about it.

‘I hope it does not happen again. As educationists, they should not learn from loan sharks,” he said.

According to Low, the tuition centre used outsiders to hang the banners.

He alleged that three posters were posted at Cheras, three at Sungai Long and three more at Taman Mulia, Kajang where two parents are staying.

However, when pressed further Low could not come with a definite answer on how many were posted. 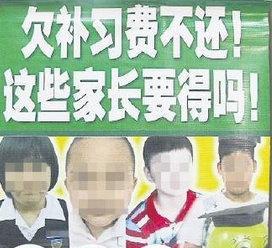 A tuition centre in Selangor allegedly posted banners of four children whose parents did not pay fees.

Major Chinese newspapers in Malaysia reported that the banners were spotted around Sungai Long and Cheras last Friday (Oct 2).

Parent Vinne Chin said she stopped sending her son to the centre in Kajang after five months as he was not improving academically and paid up after he left.

But the centre’s management claimed she did not settle her May payment.

The property agent, 39, told The Star:

“I paid his fees on May 12. Suddenly in July, they called and said I did not pay.

“I was shocked and they resorted to humiliating my son by posting a banner in his school.”

Ms Chin said she received a warning on Sept 12 in a text message in Mandarin stating that if she does not pay her tuition fees immediately, they will take drastic measures.

She added: “I saw a banner of the four kids including my son on Oct 3. We took it down immediately.”

The banner, captioned in Mandarin, read: “Owe tuition fees but refuse to pay up! Do they deserve such parents!”

He admitted students under the directive of the portrait hang up posters, but now he is aware of this practice is error and excessive, but he hang up posters of the original intention was not to humiliate the students, but… http://bit.ly/1jaJtYj

An edited picture shared on social media of one of the banners that were spotted in Sungai Long on Friday. – Facebook pic, October 5, 2015.

Social media users have slammed a tuition centre in Sungai Long, Kajang, in Selangor, for allegedly putting up banners with pictures of four pupils whose parents had apparently failed to pay their fees, reported major Chinese dailies.

Several of the banners with Chinese words were spotted around Sungai Long and Cheras on Friday evening.

Many netizens slammed the tuition centre after pictures of the banners were posted on social media.

They said the tuition centre had acted like a loan shark in shaming the students in public.

The operator of the centre, however, denied putting up the banners but said she recognised two of the pupils who had not paid their tuition fees.

She said the centre, which had been operating for seven years, would not resort to such measures.

Tuition centre: No, we didn’t do this!

PETALING JAYA: A tuition centre drew flak trying to collect tuition fees from errant parents the “ah long” way – putting up banners of the pupils concerned in the town.

The story of the name-and-shame banners was highlighted by China Press today after pictures of the banners, which bear the faces of four pupils and the message “Not paying tuition fees owed; how can we have this kind of parents!” in Chinese, was posted on Facebook by a resident.

However, the centre concerned cried foul, saying it has no knowledge of the banners and believed it was the work of a business rival.

The banners, which appeared in Cheras and Sungai Long on Friday evening, drew the ire of public members who said the action of displaying profile pictures of the pupils was unethical.

Balakong assemblyman Eddie Ng Tien Chi said the centre’s action to shame the pupils was similar to the tactic use by loan sharks going after loan defaulters.

“The pupils may be ridiculed by their peers and suffer psychological trauma,” he said.
…

Contacted by the daily, the tuition centre said there were indeed parents who owed tuition fees for months but denied putting up the banners.

The centre’s spokesman, who did not want to be identified, did not discount the likelihood that it was done by someone out to tarnish its name.

A check on Saturday morning showed that the banners had been removed.

Banana Lai Double Creek Dragon in the town of a tutorial centre suspected 窿 大耳 emulate the debt collection practices, in the local hang around with 4 pupils portrait banners and write ” owe tuition fees, these parents don’t return it to you?”, China cause people with anger.

1 Response to Collecting tuition fees ‘along’ style? Centre now says, “We did it, so sorry…”