Beware of HOAXES and SCAMS about finding Flight QZ8501

SOME OF THE RUMOURS FLYING AROUND MAY BE HARMLESS BUT OTHERS COULD ‘DONATE’ A VIRUS OR TWO TO YOU!

THIS HAS NOW BEEN DISCOUNTED AS A HOAX:

In a media statement yesterday, Roslan said he had verified the matter with Department of Civil Aviation (DCA) which confirmed there were no signs of the ill-fated flight in the radar on that day.
…

“(According to DCA officer Haidi Ramelan), there was no sign in the radar indicating the aircraft was the ill-fated

QZ8501. It was just an aircraft operating on schedule plying the usual route in and out of Kuching,” said Roslan.

He was responding to a report lodged at Santubong Police Station on Sunday afternoon by a man who claimed that he and his wife saw an aircraft bearing the same colours as AirAsia flying low near Gunung Sejinjang, heading to the sea off Tanjung Po at 11.20am, that day.

KUALA LUMPUR, Dec 29 — Bomohs or witch doctors have offered their assistance in the hunt for missing Flight QZ8501, claiming that they have managed to track down the Indonesia AirAsia plane’s location in the “supernatural” waters of Belitung.

Mukhti Maarif, the leader of shamans in Indonesia’s Belitung, said the bomohs are merely waiting for the official invitation to start their “supernatural” search, confirming that no one has sought their assistance.

“Until this moment, we have yet to be involved. We are ready to help,” the bomoh said.

Mukhti claimed that a supernatural scouting by a number of bomohs has revealed the final resting place of the plane that went missing yesterday lies in the east Belitung area, but said specific rituals have to be performed to verify their discovery.

“The aircraft fell because there was mechanical failure. At this moment, the aircraft is in the ocean near the corals, in the eastern waters of Pulau Nangka,” Mukhti was quoted saying by Tempo, reiterating that they were willing to work together with those equipped with advanced technology.

“The district of Belitung, whether it is on land, in the sea or air, is filled with supernatural matters,” the bomoh added.

Indonesia has turned down shamans’ offer of help in search for AirAsia flight QZ8501 http://ow.ly/Gxg8a

Indonesia authorities have turned down an offer from shamans (also known as bomohs) to assist in the search for the missing aircraft, Tempo.co reported.

The director of communications of national search and rescue agency Basarnas, Mr Sutono, said it could not accept the offer as “it was not our standard”.

Mr Mukhti Maarif, the leader of shamans in Indonesia’s Belitung, said the shamans are awaiting a formal request from a government agency, Tempo.co reported.

8.40am: Indonesian authorities are seen briefing search-and-rescue personnel before the mission takes place. Three areas will be searched around the islands and seas north and east of Belitung Island:

THE SPECULATIONS OF VIPs.

Here is what Indonesian Vice-President Jusuf Kalla said: There is a “huge possibility” that the missing Indonesia AirAsia Flight QZ8501, carrying 162 on board, has been in an accident.

The Malaysian Prime Minister says: The plane disappearing from radar screens soon after departure “means the possibility of something untoward happening to the aircraft”. 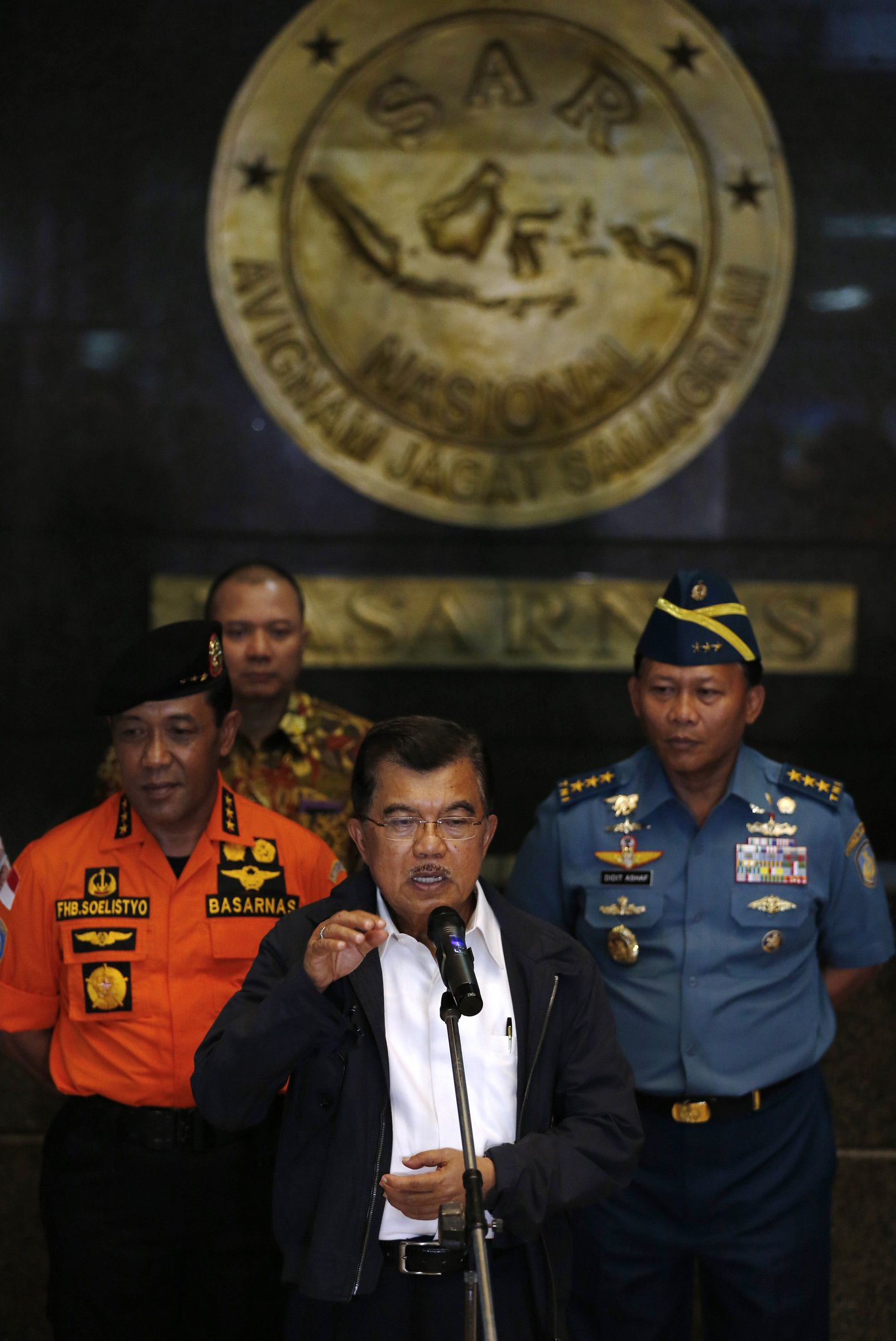 HERE IS A HOAX VIDEO.

This picture has been circulating for a few minutes on the web, I do not know if it‘s true. but I wanted to share it, I hope that the plane had been found and that there are survivors

THIS IS AN UNCONFIRMED REPORT… 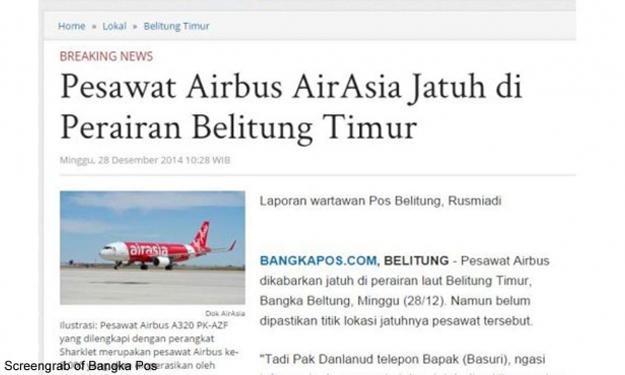 Unconfirmed reports have emerged online that wreckage, allegedly to be from the missing AirAsia Indonesia Flight QZ8501 has been found in the waters off East Belitung.

This was reported by the Bangka Pos, which however added that there was no confirmation that the purported wreckage is indeed from QZ8501, said The Star.

#QZ8501 UPDATES: There have been unconfirmed reports of wreckage found near Belitung Island. The Jakarta Post… http://fb.me/7il4JKS0e

AirAsia flight QZ8501 from Surabaya to Singapore is believed to have crashed at the location 03.22.46 South and 108.50.07 East, in waters around 80-100 nautical miles from Belitung, a National Search and Rescue Agency (Basarnas) official has said.

According to The Jakarta Post via AsiaOne, Basarnas Pangkalpinang spokesperson Supriandi said, as reported by Antara news agency on Sunday, that it had dispatched a rescue team to Belitung.

It is believed that the Airbus A320 had circled over the sea near Belitung to avoid a storm before it experienced severe turbulence and crashed into the ocean.