‘Keling’, a most racially sensitive word…

Posted on December 2, 2014 by weehingthong

Keling, sometimes kling, is not a neutral word. Speaker or listener, you can’t escape the derogatory nature of the word.

“In the Chinese and Malay communities, keling is augmented into various words of their language to form new phrases that may considered offensive and to discriminate Indians.” (http://en.wikipedia.org/wiki/Keling)

I asked my Indian friends why they were unhappy with the word. It means a pariah, an outcast, and in the caste system, a low caste.

One told me this story, which her grandparents had told her.

When the earliest Tamil people arrived by ship from Tamil Nadu, they were bond slaves of the British. To prevent their escape, they were chained to one another at the ankle when they landed, and as they walked along the streets towards their new “home”, their chains went “keling, keling, keling”. The Malays called them orang keling. And where was home? One place came to be know as Tanjong Keling or Tanjong Kling in Malacca.

Keling became an insult. It reminded them of their slavehood under the British.

Lot 2947, Kampung Bukit Naga in Shah Alam, which became the subject of unwanted attention after it was labelled with an offensive name on Google Maps. — Picture by Razak Ghazali
.

KUALA LUMPUR, Aug 4 — The name of a road purportedly located in Shah Alam, Selangor, was removed from Google Maps and Wave after complaints it offended ethnic Indians.

The Star reported that the road name, “Jalan K***** P***** 1” [two words that are derogatory references to Indians and to the vagina], did not exist even though it showed up on the maps of the two GPS-based mapping applications.

The matter was brought to attention after users took screenshots of the road name — purportedly located in Section 32, Shah Alam, Selangor — and shared it online.

The Star reported that the road name was no longer found on the online maps yesterday noon.

A Google Malaysia spokesman later confirmed the error and thanked users for notifying them.
.
Read more at http://www.themalaymailonline.com/malaysia/article/google-maps-waze-take-out-offensive-road-name#lDIacqwKXhQG5XEq.99

The very word keling, when heard, can conjure up very strong emotions.

One day, an Indian colleague came back to the teachers’ room in a rage. She asked me, in no uncertain terms, to deal with a Chinese boy who had used the word during her lesson. She was speaking, and he had turned to the boy beside him and spoken to him in Chinese, and she had heard him say keling!

She had felt insulted by his use of the derogative. She believed that he had referred to her as keling.

What he had actually said to the boy next to him was, “I accidentally tuned in to a keling radio station this morning.” He meant an Indian radio station. Yet, because he had used the word keling in his Indian teacher’s presence, she had felt insulted.

From that day  on, I reminded every class I taught to use the word Indian, never the word keling. I put them through the phrases: Indian lady, Indian man, Indian teacher, Indian radio station, Indian friend…

Slew of police reports to be filed over ‘keling’ remark http://bit.ly/15NoYtD 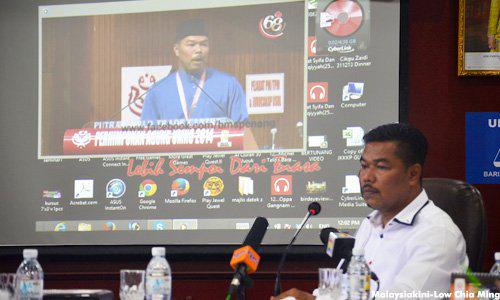 An NGO will file a series of police reports nationwide against Permatang Pauh Umno chief Zaidi Mohd Said for using a derogatory word during his speech at the Umno general assembly last week.

Tamilar Action Force (TAF) kickstarted its campaign with a police report filed in Klang this afternoon.

“This is not just for the Indian community, but for everyone,” Malaysian Indian Progressive Association (Mipas) secretary-general S Barathidasan told Malaysiakini.

Zaidi had allegedly said, “We (Umno) are very unlucky because we lost badly in constituencies with a majority of Chinese voters. So, this shows that the Malays in Penang support Umno, regardless of them being ‘mamak’ (Indian-Muslim) or ‘keling’.

By using the term “keling”, Barathidasan said Zaidi had “deeply hurt and insulted” the entire Indian community in Malaysia.

1 Response to ‘Keling’, a most racially sensitive word…