Again, the 130-year-old Sri Sundararaja Perumal temple is under attack!

THE HINDU DEFENCE BRIGADE (HDB): IN DEFENCE OF HINDU TEMPLES

The Sri Sundararaja Perumal temple was rebuilt at a cost of RM10 million and has been described as the “Thirupathi of Southeast Asia”.

It is expected to open its doors to the public in the middle of 2015. 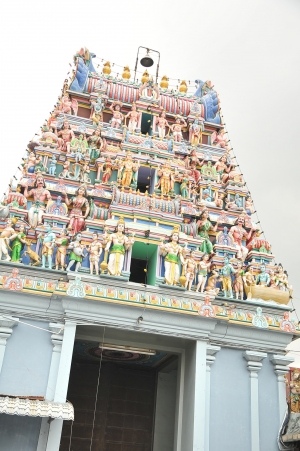 Objecting to the renovation of the 117-year-old Sri Sundaraja Perumal Temple in Klang by invoking the name of the Selangor palace is “an attempt to create racial tension in the country”.

Ganabatirau, who holds the Poverty Alleviation, Caring Government and Estate Worker portfolio, said Isma was playing the racial card in the bid to create disunity among Malaysians.

“This is so that they can achieve their goal in making other minorities to be placed in fear,” he told Malaysiakini.

“The temple has been in existence even before independence and the area is highly populated by Chinese and Indians,” he said.
…
Isma Klang vice-chief Pathan Hussin was quoted by IsmaTV as saying that plans to make the temple a tourist attraction would tarnish Klang’s reputation as a royal town and Malaysia’s image as an Islamic country.

“We in Klang see the construction of this new temple as tarnishing the image of the royal institution, which is the umbrella for Islam in this country,” Pathan was quoted as saying.

Produced in 2013, the video questioning the Sri Sundararaja Perumal temple was recently revived on social media as the renovated temple prepares to open its doors this year.

A video by Ikatan Muslimin Malaysia (Isma) making its case against a Hindu temple in Klang that has been revived on the social media has sparked fresh anger among the Hindu community.

“Why is Isma purposely provoking anger among Hindus?” Barathidasan told Malaysiakini.
…
He said he would be lodging a report at the Sentul district police headquarters in Kuala Lumpur later today.
…

In the video by IsmaTV, the narrator said plans to have the Sri Sundararaja Perumal temple become a tourist attraction would tarnish Klang’s reputation as a royal town and Malaysia’s image as an Islamic country.

The video also quoted Klang Isma vice-chief Pathan Hussin as saying, “We in Klang see the construction of this new temple as tarnishing the image of the royal institution, which is the umbrella for Islam in this country”.

ANOTHER HINDU TEMPLE UNDER ATTACK

Isma president Abdullah Zaik Abdul Rahman had called on the government to take the necessary steps to ensure harmony and to protect Malaysia’s image in the eyes of the international Muslim community.

This was Isma’s second outburst against Hindus in the past one week.

They also came on strongly on the issue of cows being slaughtered in schools when they warned Hindu parents to back off with their demands that schools not be used for such rituals.

Let them make noise, we got our own funding, says Klang temple president

“Let them make all the noise they want, it is getting quite common here in Malaysia.” This was the response from the president of the 130-year-old Sri Sundararaja Perumal temple in Klang which has now come under attack from a Muslim non-governmental organisation protesting the refurbishment work.

Ikatan Muslimin Malaysia (Isma) had said that the refurbishment of the temple in the centre of Klang town would create a negative impression among Muslim tourists who visit Malaysia.

The group was also concerned with a report that the temple was poised to become a landmark and tourist attraction in Klang.

But temple president S. Anandakrishnan was unperturbed by Isma’s concerns, adding he was “not bothered with what certain groups had to say”.

“Who are they to comment anyway? We got our own funding, we did not take any money from the government. Freedom of religion is enshrined in the Federal Constitution.

“And by the way, the structure was completed two weeks ago. All that is left is the statues and the dome which will be ready in 12 months,” said Anandakrishnan, adding that the decorative granite stones from India had also been assembled two weeks ago.

A Muslim non-governmental organisation is against the rebuilding of a Hindu temple in Klang at a cost of RM10 million, saying it will create a negative impression among Muslim tourists from the Middle East and undermine the government’s Islamic credentials worldwide.

Ikatan Muslimin Malaysia (Isma) president Abdullah Zaik Abdul Rahman said such development is not covered in the Federal Constitution under freedom of religion because it exceeds the rationality of religious freedom.

“For this, we ask the Prime Minister, the Tourism Minister and the state government to be mindful of this,” he said in a statement today.
…

Abdullah said the prime minister had pledged to uphold the teachings of Islam and, as such, plans to rebuild certain houses of worships for tourism purposes went against that pledge.

1 Response to Again, the 130-year-old Sri Sundararaja Perumal temple is under attack!