The residents decided to bring the matter up to the MACC in view of irregularities in the land ownership transfer.

Residents from Kampung Hakka today, together with NGO, Jaringan Rakyat Tertindas (Jerit) and Parti Sosialis Malaysia (PSM) filed a complaint at the Malaysian Anti-Corruption Commission (MACC) office; urging them to investigate this matter.

Their letter was received by MACC’s investigative officer, Rosmanah Zihun.
…

They want MACC to

WHO FIRED THE SHOTS?

The glass doors of the office of a developer linked to suit against Kg Hakka villagers were shattered after it was shot 8 times last midnight. — Photo by Dzulkeffli MustaphaRead more: 8 shots fired at developer’s office in Mantin – Latest – New Straits Times http://www.nst.com.my/latest/8-shots-fired-at-developer-s-office-in-mantin-1.413968#ixzz2lqZCrUvW

SEREMBAN: Several gunshots were fired at the office of the developer involved in a suit against villagers in Kampung Hakka in Mantin, early Wednesday.

It could not be immediately established how many shots were fired but preliminary investigations found at least five casings at the scene.

A police forensic team was immediately dispatched to the scene to search for clues.

More reasons why Mega 9 should not be in cloud nine

COMMENT I now come to my fourth argument on why there can be no justification by Mega 9 Development Sdn Bhd and its boss Ng Kek Kiong to forcefully and brutally demolish 10 houses in Kampong Hakka in Mantin, Negeri Sembilan, in which four people were still occupying, on Oct 31.

In most cases of eviction by court order, the bailiff appointed by the court must be 100 percent sure of the situation before he (or she) orders the demolition of a dwelling. Here, the entire eviction was carried out by the developer’s lawyer, not by a bailiff.

One of the first houses demolished in Kampong Hakka, besides the village community hall, belonged to Yong Kai Hoong, which had been there for more than 50 years. He was never served with a notice that his house would be demolished.
…
How come the Mega 9 can demolish a house without a notice and without a specific court order? The company claimed it can demolish any building in that location, even if its owners or occupants were not served with a legal notice.
…

My fifth point is on the peculiar way this Kampung Hakka eviction took place. I have been at many sites of eviction of homeowners, throughout the nation. In most cases, the court bailiff will first determine which house will first be demolished, and this is based on the court order.

He will then instruct the developer to demolish the houses and if we try to stop him, the police will arrest us for preventing the bailiff from carrying out his duty. In most cases, the bailiff is neutral and will listen to the people. He can also postpone evictions.

The police normally play a secondary role. In the Kampong Hakka demolition on Oct 31, the bailiff never came to the front of a house. It was the developer’s lawyer who did the work. The Mega 9 lawyer executed the order and we are prevented from meeting the bailiff.

The police worked very hard to ensure that the demolition and eviction took place. No negotiation was allowed with the bailiff. So, at the end of the day, the police and Mega 9’s lawyer executed the court order and not the bailiff. The bailiff here only listened to the developer.

We, Ghandi and I, were not allowed to inform the baliff and the developer’s lawyer that the villagers had, that same morning, filed a new application with the Court of Appeal in Putrajaya for a stay of the demolition order.

Read more: More reasons why Mega 9 should not be in cloud nine

No ‘cloud nine’ for Mega 9 on Kg Hakka tussle

COMMENT No justification can be accepted for the action carried out by Ng Kek Kiong, the boss of Mega 9 Development Sdn Bhd, in forcefully and brutally demolishing 10 houses in Kampong Hakka in Mantin, Negeri Sembilan, in which four people were still occupying, on Oct 31.
…

We have nine reasons why Mega 9 should not stay in cloud nine. The company should be ashamed of its actions and in this part of my argument, I will touch on the first three reasons we hold. These are:

The villagers have not exhausted their legal battle.
…

Ng is not interested in negotiating with the villagers. Many attempts were made to negotiate with Ng and Mega 9. Among the groups involved was Human Rights Commission Suhakam, which felt that the housing rights of the villagers has been violated.
…

No ‘cloud nine’ for Mega 9 on Kg Hakka tussle

Displaced residents of Kampung Hakka Mantin, Negeri Sembilan today posted angry messages at the sales office of a developer responsible for their eviction after failing to meet the company’s representative.

Among others, the messages posted on the door of the sales office read “Ng Kek Kiong”, “humanity before profit”, “we want our houses not compensation”, “stop the bullies” and “Hakka eat Hakka”.

Yesterday, Ng has alleged a group of “professional squatters” and disabled persons were purposely hired to stay in the houses that were slated for demolition last week to create a scene to attract media attention.

The protestors said that they were offended by Ng’s remarks.

“We condemned Ng for the disrespectful remark, which has insulted our villagers. He claimed we took RM500 but this is to insult our wisdom and dignity,” said Chong Tze Yaw, organiser of the protest.

Developer Mega 9 boss Ng Kek Keong’s move on Kampung Hakka recently was one of revenue over heritage, says the writer who is the secretary general of Parti Sosialis Malaysia.

By S ArutchelvanNo justification can be accepted for the action of Ng Kek Kiong, the boss of Mega 9 who forcefully demolished 10 houses at Kampung Hakka Oct 31 in which, four were still occupying the units.
…There was no justification or justice for the “sins” committed by Mega 9 or Ng who was supposed to be involved in various guilds and associations.Sadly, he was also an active member of FuiChui Associations and Hakka Association. This is a Hakka village. One banner read, “Hakka makan Hakka” (Hakka eats Hakka). Many villagers have told me that Ng only wanted to pay them peanuts.
…Why demolish the community hall?

What was tragic was also the decision of Ng and Mega 9 to demolish the community hall of the old boys association of Chi Chi. Is it because that it was the place where the community used to meet up and discuss their plans?
…The writer is the secretary general of Parti Sosialis Malaysia. He was arrested twice during the Kampung Hakka forced eviction.
http://www.freemalaysiatoday.com/category/opinion/2013/11/07/well-continue-fighting-for-kg-hakka/
—
KAMPONG HAKKA
Malaysiakini

The property developer who sought the demolition of Kampung Hakka Mantin, Negeri Sembilan last week has finally broken its silence and blamed outsiders for stoking tensions in order to politicise the matter.

Mega 9 Development Sdn Bhd board chairperson Ng Kek Kiong said “professional squatters” and disabled persons were purposely hired to stay in the houses that were slated for demolition, thus causing a scene.

“Some people brought in a group of professional squatters and handicapped persons to our Kampung Hakka. They can get RM500 if they cry in front of the press,” he alleged in a press conference today.

As an example, Ng said one person had deliberately set up at tent at the site of one of the demolished houses despite the fact that the person owns a house at a residential area adjacent to Kampung Hakka Mantin.Ng, a local who was born and raised in the village, is also the former president of Federation of Fui Chiu Association Malaysia, an umbrella body for Hakka clans in Peninsular Malaysia.

He also claimed that there were no occupants, other than some drug addicts, in the houses demolished at Phase 1 of the village.

“No kids, no women and no men had been stranded because of the demolition. We only saw some snakes and drug addicts inside,” he said. 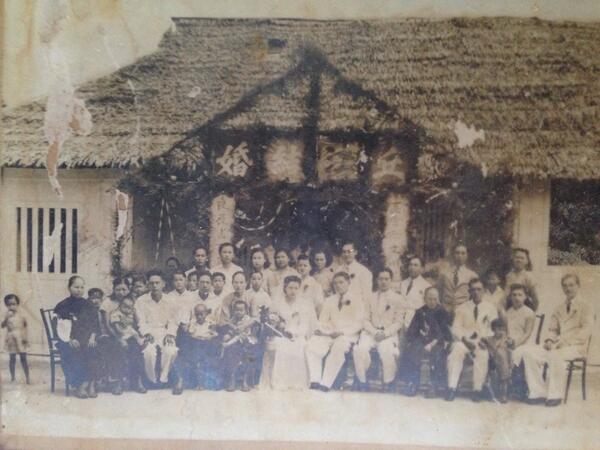 The scene of destruction 3 days after kg Hakka Mantin was flattened out.. Families still reeling from d loss of their homes and properties, after more than 100 years standing!

For Kg Hakka residents, it’s another case of people and 100 years of history being trampled.. Zakiah Koya voices out http://bit.ly/1iyOke4
— 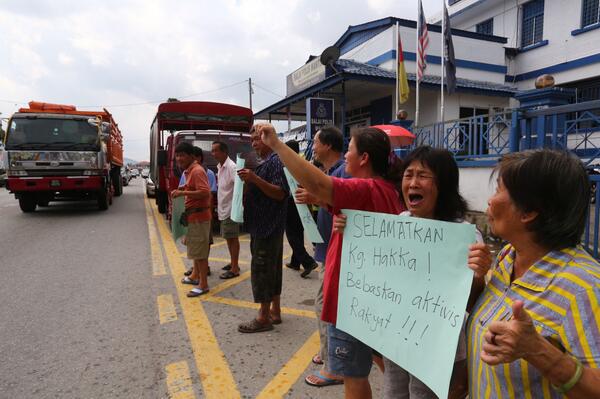 MANTIN (Nov 2): “This is the worst Deepavali ever.”

Amarjit Kaur,49, sighed as she stared at decorative stickers and a bright red curtains, buried under a hill of construction debris.

She does not go on shopping spree for Deepavali, celebrations were kept simple with some homemade biscuits and warm family moments.

“Look at my house now. It looks as if someone dropped a bomb here and my traumatized mother is in the clinic. There’s nothing to celebrate this year.”

She is one of the villagers of Kampung Hakka that had her home torn down on Oct 31, before a stay order was granted to halt demolition work.

Amnesty International slammed yesterday’s arrests as an infringement on the rights of the people, showing that Malaysia was increasingly intolerant towards free speech and protests.

“Arbitrary arrests like this infringe on the right of protesters to peacefully exercise freedom of expression and assembly, and have a chilling impact on anyone engaged in defending human rights,” said Isabelle Arradon at Amnesty International through a press statement.

Seremban MP Anthony Loke, who were among 19 protesters carted away to a lock-up yesterday in Negeri Sembilan for defending the demolition of Kampung Hakka Mantin, has complained of police cruelty.

“I felt humiliated. In discharging my duty as a wakil rakyat, today I was treated like a criminal by the police,” the DAP MP wrote on his Facebook page.

“Handcuffed, (made to do a) urine test, DNA sampling, fingerprints recording and the worst, photographed with the report number at my chest.”

He was arrested along with other human rights activists including PSM secretary-general S Arutchelvan, Suaram’s Nalini Elumalai and A Thevaraj, as well as other opposition politicians and state assemblypersons.

They have since been released on bail pending a formal charge.

At 8.30pm, all detainees were released. By then, about 80 people had gathered outside the gates of the police station to welcome them with a candlelight vigil.

In his speech, Loke said the developer had acted excessively because he had told the court bailiff, the police, and the developer’s lawyers that the residents are seeking a stay of execution at the Court of Appeal in Putrajaya, but the developer pressed on with the demolition nonetheless.

“We have no choice but to sit-in at the alumni club’s hall. In less than three minutes, the police moved in to handcuff us and took us away. Half-an-hour later, our lawyers obtained the court order prohibiting further demolition.

“The developer can’t even give us 30 minutes to plea (to the judges), so I’d say this developer is heartless,” he told the supporters outside the police station, to which the crowd cheered enthusiastically.

MANTIN: About 19 people including DAP representatives were detained after negotiation efforts failed, during a stand off at Kampung Hakka in Mantin, Negeri Semban.

At 11.30am Arutchelvan was arguing with the police who were cordoning off an area for demolition, when he and another PSM activist with him, Ghandi, were handcuffed and taken away in a police vehicle.
About 50 bystanders in the predominantly Chinese new village shouted various vulgarities at the police as the arrest took place.At around noon, the six DAP representatives were also arrested for occupying the SRJKC Chi Chi alumni clubhouse that was about to be torn down.After a three minute warning the police entered the building and arrested Loke, along with Rasah MP Teo Kok Seong, Nilai rep J Arulkumar, Senawang rep P Gunasekaran, Bahau rep Chew Seh Yong and Temiang rep Ng Chin Tsai and several others.
Demolition of the building began shortly after.
6 DAP reps, Arul arrested as gov’t tears down Kg Hakka