Annuar Musa, who joked about Mahathir’s possible demise and whom TMJ called “a failed leader”…

The second image in this tweet was taken from an article about a retired Filipino cop burning the Malaysian flag in Manila, 2013. https://t.co/PvopHe5loS@PDRMsia @McmcReact @SKMM_MCMC Please investigate. Thank you. pic.twitter.com/nQbcbYC6Xu 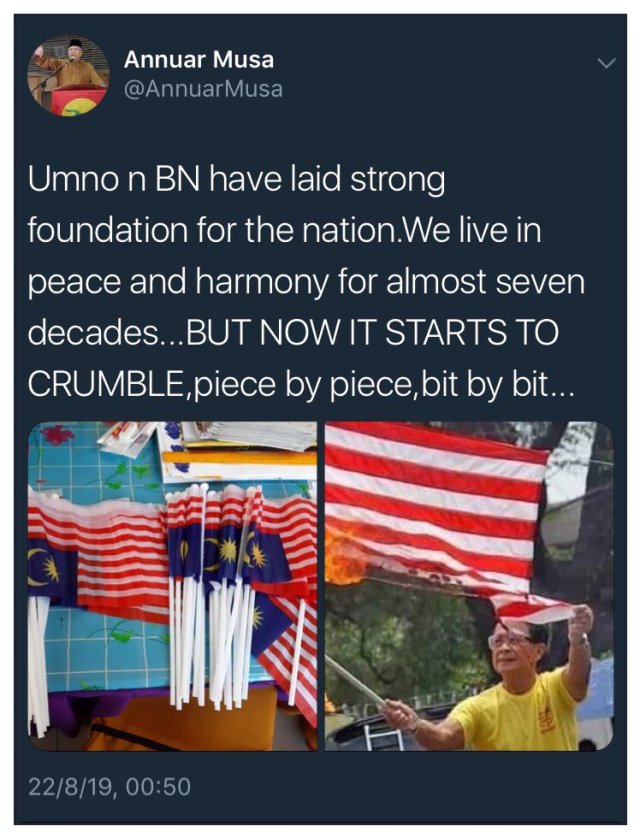 With Ketereh around, one don't need enemies. See for yourself! pic.twitter.com/Vwxy3MtQME

So stupid. Umno should be very careful not to even hint of Mahathir possibly dying, let alone in office. If that happens, Dr M is inevitably sainted — all their previous “Mahazalim” rehashed attacks will start looking disgustingly cruel. Ammo against Umno forever. https://t.co/Tv5sBiqCNQ

Annuar was ranting like mad so Nik Nazmi’s shutdown was absolutely perfect. https://t.co/a4ormKI1ue

What a despicable, low class prick. I wonder which god he prays to? 🤔https://t.co/oGvFBBReol

UMNO's Annuar Musa in shocking statement wish for Mahathir to die and God to test Selangor in next elections?This is orang malayu who thinks he is messenger of God by wishing for others fellow muslims to die so they cannot win next elections?CAN YOU BELIEVE IT? What a MORON !

EVIL-HEARTED & DESPERATE, UMNO NOW HOPES FOR MAHATHIR TO DIE? IN SHOCK COMMENTS, ANNUAR MUSA AS GOOD AS SAYS DEATHS OF SHUHAIMI & EDDIE ARE 'GIFTS FROM GOD', LANGKAWI MAY BE NEXT BY-ELECTION AFTER SUNGAI KANDIS, BALAKONG https://t.co/vvnIVrV2JF

THE by-elections in Selangor are a gift from god and the right ground for Barisan Nasional to test its machinery and campaign before the 15th general election, said Umno leaders.

“Do you know why we are having this by-election?” Umno secretary-general Annuar Musa asked more than 1,000 Selangor Umno members at the election centre on Jalan Siswi Kanan for the Sg Kandis by-election.

“Because god wants to test Selangor. Before this (Sg Kandis) has begun its campaign, there will be another one in Balakong. Maybe God will decide to have more by-elections,” Annuar told the more than 1,000 Selangor Umno members who had turned up its election centre on Jalan Siswi Kanan.

“We don’t know where the next one will be. Maybe its Langkawi or maybe it’s Bera. Let’s just hope it’s not in Ketereh,”   the Ketereh MP said.

The Langkawi federal seat is held by 93-year-old Prime Minister Dr Mahathir Mohamad while Bera is held by Umno vice-president Ismail Sabri, who was seated on the stage next to deputy president Mohamad Hassan and Sg Kandis candidate Lokman Noor Adam.

The Sg Kandis state seat fell vacant after Shuhaimie Shafiei died on July 2 from cancer while a day before nomination for Sg Kandis, Balakong assemblyman Eddie Ng died from a car accident.

“I think there’s at least one more in Selangor,” said the former Negri Sembilan menteri besar.

Like Loading...
This entry was posted in Uncategorized and tagged annuar musa, annuar musa on by elections. Bookmark the permalink.

1 Response to Annuar Musa, who joked about Mahathir’s possible demise and whom TMJ called “a failed leader”…