Jamal Yunos: On the run! Azmin Ali: And I thought he was a brave warrior…

KUALA LUMPUR: Sungai Besar Umno division chief, Datuk Seri Jamal Md Yunos, claimed police do not need to launch large-scale hunt against him, including seeking assistance from Interpol as he had only committed minor offences.

He also claimed that the offences he committed were not a crime that would threaten the safety of Malaysians.

Hence, Jamal hopes that Interpol will not entertain Home Minister Tan Sri Muhyiddin Yassin’s request to locate him, as he considered the move, a waste of time.

Jamal went on to say that what he did in the past, such as leading a demonstration against a beer festival by smashing boxes of beer bottles with a sledgehammer after being barred from delivering them to the State Secretariat building in Shah Alam, was just a minor offence.

“Such offence only involved a maximum RM400 penalty, and other offences like illegal protests, carries a fine of only RM100.

“So, it is up to the government to seek assistance from Interpol or the cooperation of international police. I am still in the country,” he said in a video distributed to the media today.

He claimed that Immigration Department director-general Datuk Seri Mustafar Ali has also confirmed that there was no record of him leaving the country.

“What is more important that I did not violate any laws,” he said.

PETALING JAYA, May 30 — After failing to show up at the police station today, Datuk Seri Jamal Yunos has claimed ‘hidden hands’ are plotting his downfall, and that the police arrest was part of the plan.

Jamal, who was supposed to show up at the Ampang Jaya distrct police headquarters here today at 2.30pm, did not appear after Jamal’s lawyer, Datuk Mohd Imran Tamrin addressed the media on his client’s absence at 3.30pm.

“I am confident that after several Red Shirt members were charged in court, there was a concerted plan by those in power to instruct the police to take action against me even though the police have given me a guarantee that I would only be needed to complete the bail documentation process.

“I am not against the application of law, but when my name has been blacklisted by the Immigration Department and placed under police surveillance as if I am a dangerous person, there is sufficient information that I have received, claiming I will be detained and not be released on bail as stated before,” he said in a statement today.

Jamal Yunos has gotten in touch with his lawyers. • says he wasn’t on the run, just thought bail process was complete when he was discharged • rushed off to settle “office hours” matters • is willing to complete the bail process once he’s recovered • situation “exploited” 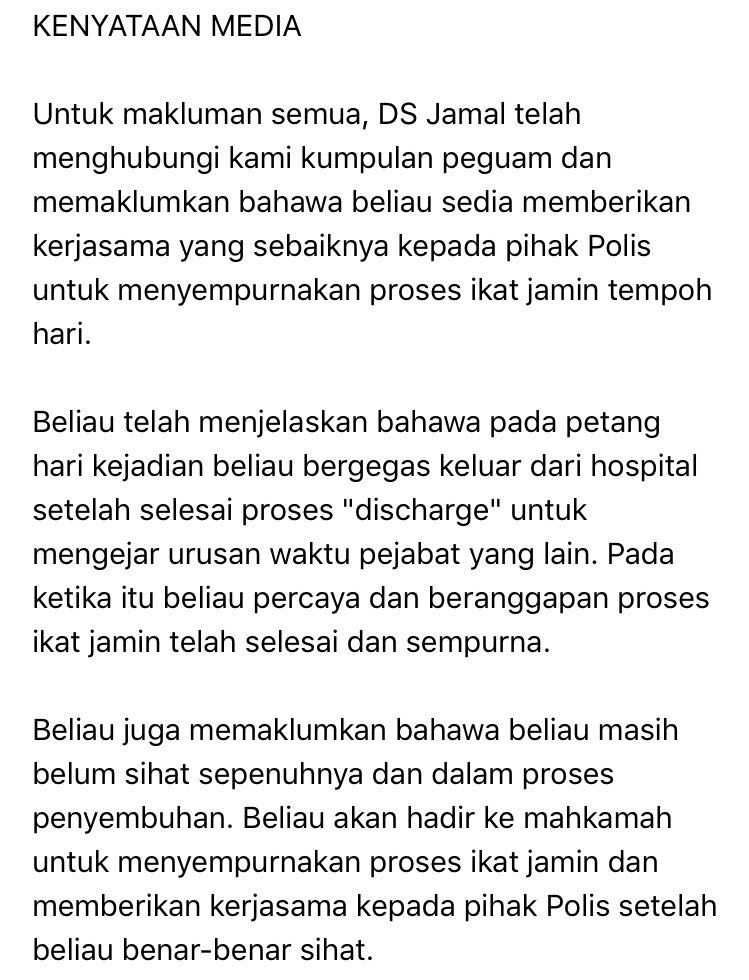 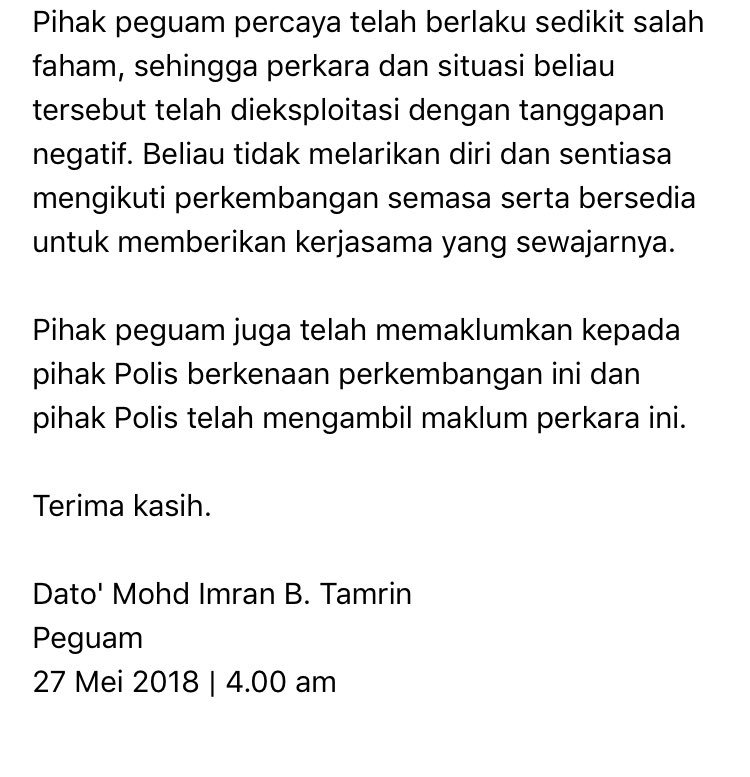 KMJ and 4 others Retweeted

BREAKING: Jamal Yunos has “disappeared” from hospital. He was slapped with 3 charges today while there seeking treatment.
.

Where is Jamal Yunos? Umno leader escapes from police custody

By Ben Tan And G. Prakash

It was learnt that the controversial 48-year-old Umno politician was found missing from his hospital bed at 5.30pm, just as Shah Alam Court assistant registrar Rahasbiah Abd Rahman was about to bail him under Section 268 of the Penal Code for creating public nuisance.

A police source said Jamal was found missing by the assistant registrar upon her arrival at the hospital ward.

“Only the suspect’s lawyer and guarantor were at the hospital ward, while there was no sign of police personnel standing guard at his ward,” said the source to Malay Mail tonight.

The source said initial investigations revealed that Jamal had not been seen in his hospital ward since 3pm.

“Subsequently, police have mounted a manhunt in an operation called “Ops Tutup” at 7.12pm to locate the suspect who fled before his bail was granted.

“We have put out an all-points bulletin (APB) to all police stations and units to locate for the suspect,” said the source.

It is understood that Jamal’s lawyer Datuk Imran Tamrin is currently assisting the police to help locate the Red Shirts leader.

JUST IN: UMNO division leader Jamal Yunos arrested in connection with investigation under the Arms Act.

The Sg Besar Umno chief was arrested while being treated at a private hospital in Kuala Lumpur.

He said Jamal was arrested at 1.15pm at the Ampang Puteri Specialist Hospital, where he is being treated.

“There are several others cases for which the suspect is being investigated,” he said, adding that two arrest warrants would be served on Jamal as soon as he is discharged from the hospital.

Like Loading...
This entry was posted in Uncategorized and tagged arrest of jamal yunos, jamal yunos. Bookmark the permalink.

1 Response to Jamal Yunos: On the run! Azmin Ali: And I thought he was a brave warrior…