Most expensive coffee in the world: From elephant poop or civet poop? Er, why not coffee from human poop?

COFFEE: 1 CUP A DAY KEEPS ME WORKING AWAY

WHY NOT COFFEE FROM HUMAN POOP?

Which do you prefer? Coffee from elephant poop or civet poop?

Neither for me. No thanks! I will stick to Nescafe 2-in-1.

In the lush, green hills of northern Thailand, a woman painstakingly picks coffee beans out of a pile of elephant dung, an essential part of making one the world’s most expensive beverages.

This remote corner of Thailand bordering Myanmar and Laos is better known for drug smuggling than coffee, but Blake Dinkin decided it was perfect for a legitimate enterprise that blends conservation with business.

“When I explained my project to the mahouts (elephant riders), I know that they thought I was crazy,” the 44-year-old Canadian founder of Black Ivory Coffee, which uses the digestive tract of elephants to create a high-end brew for coffee connoisseurs.

Initially, he considered using civet cats to make “kopi luwak” coffee, which uses beans collected from the droppings of the Asian cats. But the quality of the end product has weakened as demand has grown in Southeast Asia — including in Thailand, Indonesia and Vietnam.

In the lush hills of northern Thailand, a herd of 20 elephants is excreting some of the world’s most expensive coffee. Trumpeted as earthy in flavour and smooth on the palate, the exotic new brew is made from beans eaten by Thai elephants and plucked a day later from their dung. A gut reaction inside the elephant creates what its founder calls the coffee’s unique taste.

Black Ivory Coffee is a brand of coffee produced by the Black Ivory Coffee Company Ltd in northern Thailand from Arabica coffee beans consumed by elephants and collected from their waste. The taste of Black Ivory coffee is influenced by elephants’ digestive enzymes, which breaks down the coffee’s protein. “Protein is one of the primary factors for bitterness in coffee. Less protein results in a coffee with less bitterness.” The coffee beans are digested within 15 to 70 hours, and are present with various other ingredients in the elephants’ stomachs, which imparts specific flavors to the product.  In contrast to civets who are omnivores, elephants are herbivores. Herbivores utilize fermentation to help break down cellulose (green leafy matter).

The Civet cat is known as Luwak in Indonesia and Musang in Malaysia.

The Disturbing Secret Behind the World’s Most Expensive Coffee

Kopi luwak is made from coffee beans plucked from civets’ feces. This is bad news for civets.

It’s the world’s most expensive coffee, and it’s made from poop. Or rather, it’s made from coffee beans that are partially digested and then pooped out by the civet, a catlike creature. A cup of kopi luwak, as it’s known, can sell for as much as $80 in the United States.

Found in Southeast Asia and sub-Saharan Africa, the civet has a long tail like a monkey, face markings like a raccoon, and stripes or spots on its body. It plays an important role in the food chain, eating insects and small reptiles in addition to fruits like coffee cherries and mangoes, and being eaten in turn by leopards, large snakes, and crocodiles.

At first the civet coffee trade boded well for these creatures. In Indonesia, the Asian palm civet, which raids commercial fruit farms, is often seen as a pest, so the growth in the kopi luwak industry encouraged local people to protect civets for their valuable dung. Their digestive enzymes change the structure of proteins in the coffee beans, which removes some of the acidity to make a smoother cup of coffee.

But as civet coffee has gained popularity, and with Indonesia growing as a tourist destination where visitors want to see and interact with wildlife, more wild civets are being confined to cages on coffee plantations. In part, this is for coffee production, but it’s also so money can be made from civet-ogling tourists. 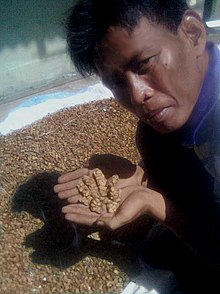 Sumatran kopi luwak farmer gathers up the droppings of civet cats which eat cherries, digest them, then egest them in their feces.
.

Producers of the coffee beans argue that the process may improve coffee through two mechanisms, selection and digestion. Selection occurs if the civets choose to eat cherries. Digestive mechanisms may improve the flavor profile of the coffee beans that have been eaten. The civet eats the cherries for the fleshy pulp, then in the digestive tract, fermentation occurs. The civet’s protease enzymes seep into the beans, making shorter peptides and more free amino acids. Passing through a civet’s intestines the cherries are then defecated with other fecal matter and collected.

The traditional method of collecting feces from wild civets has given way to intensive farming methods in which civets in battery cage systems are force fed the cherries. This method of production has raised ethical concerns about the treatment of civets due to “horrific conditions” including isolation, poor diet, small cages and a high mortality rate. A 2013 BBC investigation of intensive civet farming in Sumatra found conditions of animal cruelty.  Intensive farming is also criticised by traditional farmers because the civets do not select what they eat, so the cherries which are fed to them in order to flavor the coffee are of poor quality compared to those beans collected from the wild. According to an officer from the TRAFFIC conservation programme, the trade in civets to make kopi luwak may constitute a significant threat to wild civet populations.

Like Loading...
This entry was posted in Uncategorized and tagged coffee, coffee from civet musang luwak poop, coffee from elephant poop. Bookmark the permalink.