Bersih 5: To demand the removal of Najib as PM?

The last time he made a promise, did he keep it? No.

He then organized a rally against the Selangor Govt which fizzled out.

FAIL! Jamal Yunos and his Ampang Rally against the Selangor Government

His following is shrinking!

@tankengliang so it’s ok for redshirts to demo at soho today???? U call that respect?

disagree with the Opposition plans to hold senseless street demo to stir chaos in our country. Pls respect Malaysians choice in GE13

You are forgetting the red-shirts from BN?

…
In reply to Tan Keng Liang

@tankengliang do you agree with the red shirts aka UMno’s dogs’ rally. #rhetorical You’re not clever lah. Enough

let’s not forget the violent street demo by Opposition in the past. Pls don’t risk public safety. Go demo in Stadium
0 retweets 0 likes

But the red shirts are mainly made up of the mat rampit; homeless and Felda settlers….all clueless about Jamal 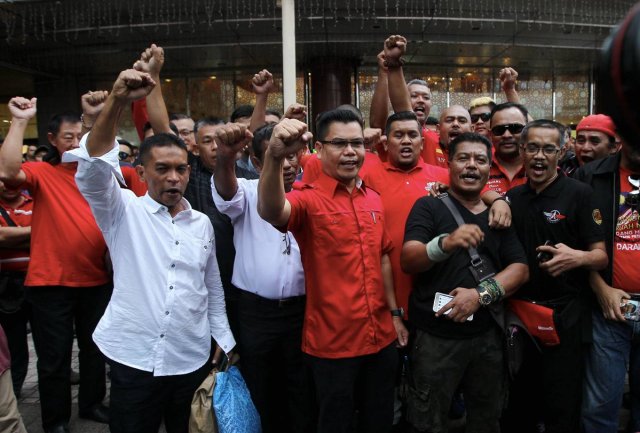 The Star is giving more coverage to that tiny gang of Red Shirts than 1MDB. They have their priorities sorted.

KUALA LUMPUR: A small group of “Red Shirt” protesters gathered in front of Sogo, along Jalan Tuanku Abdul Rahman, for about an hour and dispersed before a drizzle.

Jamal claimed the protest was against former prime minister Tun Dr Mahathir Mohamad and former Malaysian Bar president Datuk Ambiga Sreenevasan, who had called for the public to take to the streets to demand the resignation of Prime Minster Datuk Seri Najib Tun Razak.

Sungai Besar Umno chief Jamal Md Yunos has announced that he will hold a rally to counter Bersih 5 if that ever happens.

“If that happens we will come down with the second version of Himpunan Merah (Red Rally).

“We will do our protest on the same day and hour as theirs,” Jamal said at a press conference outside the Sogo shopping mall in downtown KL.

@tankengliang so i take it you will be protesting in sogo pertahan with our red shirts? 1Malaysia!

Red-shirts to hold gathering near Sogo

Organisers of the event have been sending out invitations for the “red-rally” protest on social media for a press conference and a gathering amid claims that former prime minister Tun Dr Mahathir Mohamad and former Malaysian Bar president Datuk Ambiga Sreenevasan were calling for the public to take to the streets to demand the resignation of Prime Minster Datuk Seri Najib Tun Razak.

This follows after the US Justice Department filed civil suits in Washington on Wednesday seeking to seize US$1bil (RM4.02bil) worth of assets allegedly obtained using funds siphoned from 1Malaysia Development Berhad (1MDB).

When contacted, Jamal said on Friday that he expected “sufficient” turnout for the event, which is scheduled to start at 4pm in front of the Sogo shopping complex in Kuala Lumpur.

“We do not want to disturb public order,” he added.