‘If exposing me makes millionaires, why not?’

Dr Mahathir: ‘If exposing me makes millionaires, why not?’ http://www.malaysiakini.com/news/300469

Tun Dr Mahathir Mohamad poses with a replica of Poh Kong’s Gold Note of Hope during its official launch in Putrajaya, November 8, 2018. — Picture by Mukhriz Hazim

“I’m not sure whether he has the evidence and maybe he can show how many billions I have,” said the prime minister after launching Poh Kong’s ‘Gold Note of Hope’.

Zaid blogged yesterday that PH’s 2018 election manifesto was written by idealists who promised a welfare state and said the problem was that the “real” decision makers in the government were not socialists or supporters of the welfare system.

Instead, he said, they were billionaires and towkays who were in line with Dr Mahathir’s economic philosophy and liked selling assets and favoured creating more wealthy businessmen.

“That’s his opinion,” Dr Mahathir said in response today. “I don’t have to agree with everybody. People are free to make their own opinion in this country.”

‘If exposing me makes millionaires, why not?’

Dr Mahathir: ‘If exposing me makes millionaires, why not?’ http://www.malaysiakini.com/news/300469 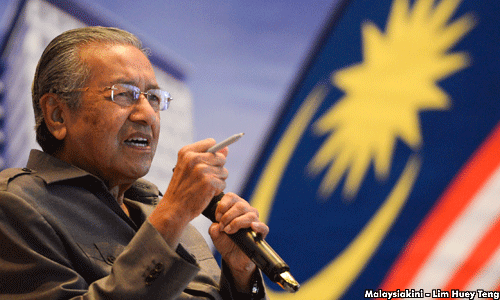 Dr Mahathir Mohamad has sarcastically welcomed an offer of up to RM1 million per person for information about the former prime minister’s alleged ‘hidden’ wealth.

“I wish everybody good luck. I hope they will earn more millions.

“I’m sure there must be quite a number of things they can find, and if they make money, why not?

“It is an easy way for them to make money,” he was quoted as saying by The Star Online.

Newly-formed NGO, Citizens of Accountable Governance Malaysia (CAGM): RM1 million if you can provide information in the ‘hidden wealth and riches’ of Dr Mahahir.

Citing Wikipedia, CAGM claimed that Dr Mahathir — the country’s longest-serving prime minister — was the second richest head of government after deposed Egyptian president Hosni Mubarak, with an estimated net worth of US$44 billion (RM161 billion).

KUALA LUMPUR, May 30 — A group calling itself Citizens of Accountable Governance Malaysia (CAGM) has offered rewards of up to RM1 million for anyone who can provide information leading to Tun Dr Mahathir Mohamad’s alleged “hidden wealth and assets”.

In its offer today, CAGM pledged to protect the identities of the whistleblowers “at all costs”.

“The reward is worth up to RM1 million per individual based on substantiality, authenticity and importance of evidence that can be utilised by law enforcement agencies to recover these hidden wealth,” said its chairman Md Zainal Abidin in a statement.

Md Zainal did not disclose the source of its funds.

Did they form Citizens for Accountable Governance Malaysia (CAGM) just to support Najib and attack Mahathir??

Chairman, Mohd Zainal, 45, a lawyer by profession, said CAGM was only set up a month ago and that it has about 2,000 members. 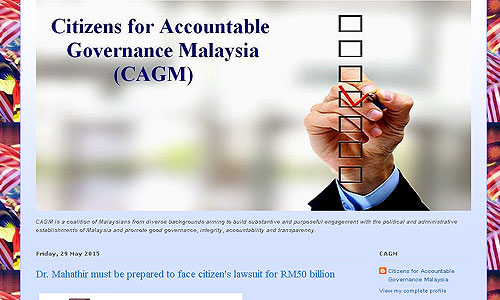 Citizens for Accountable Governance Malaysia (CAGM) chairperson Mohd Zainal Abidin said billions of ringgit in taxpayers’ money went down the drain during Mahathir’s tenure as prime minister between 1981 and 2003.

“It is time for Mahathir to come clean on all his financial scandals and answer Malaysians on what went wrong during his administration.

“If he fails to do so, then CAGM, representing a group of concerned Malaysians, will not hesitate to file a citizen’s lawsuit, to the amount of RM50 billion, against Dr Mahathir,” Mohd Zainal said in a statement today.