Most of the fatal accidents happened on federal roads with 44 cases, state roads (36 cases), highways (28 cases), and also city and town roads with 21 cases.

“The 150 road fatalities also involved motorcycles with 92 deaths, cars (36 deaths) and pedestrians with 11 deaths,” he told Bernama via WhatsApp.

Mohd Fuad said 180,443 summonses were issued for various traffic offences, such as speeding and misuse of parking lots.

JPJ: The SEVEN BIG SINS while on the road.
1. Beating the red light
2  Driving in the emergency lanes
3. Overtaking along the double lines,
4. Queue jumping
5. Using the handphone while driving
6. Backseat passengers not wearing a seat belt
7. Motorcyclist without a crash helmet

In just four days since the start of the operation on Feb 12, some 282 motorists were caught on camera by these officers for various offences around the city.

Kuala Lumpur JPJ director Ahmad Ziki Abdul Rahman said the plainclothes officers were focusing on motorists who commit the “seven big sins” while on the road.

The offences are beating the red light, driving in the emergency lanes, overtaking along the double lines, jumping queue, using the handphone while driving, motorcyclists not wearing helmets and failure of backseat passengers to belt up.

“From Feb 12 to Feb 15, our undercover officers took photographs of 176 motorists beating the red light.

“They will be receiving their summonses in the mail,” he said after the launch of the department’s Chinese New Year road safety campaign at the PLUS Sungai Besi toll plaza yesterday.

He said the undercover officers, working in teams of two, also caught on camera 45 motorists jumping queue and 45 others using the emergency lane.

He added that 16 were summoned for failing to get their backseat passengers to belt up. He said similar undercover JPJ teams were being deployed nationwide.

PETALING JAYA: An average of 17,000 summonses have been issued daily since Ops Selamat started last Thursday.

“Among the traffic offences we are focusing on are speeding, misusing the emergency lane, cutting queue, overtaking at double lines and beating the red light.

“Those who flout the law for these offences will be shown no mercy and be subjected to a RM300 compound, the maximum,” he said yesterday.

SAC Mohd Fuad said there were 85 road deaths during this five-day period.

“Motorcyclists make up the majority of the fatalities with 55 deaths, followed by car occupants (18), pedestrians (five), cyclists (three) and others (four deaths).

THEY GIVE UP THEIR LEAVE. TO SAVE OUR LIVES.

TAPAH: The Road Transport Department (JPJ) has deployed 1,800 officers and other personnel at 128 locations nationwide to improve road safety in conjunction with the Chinese New Year (CNY) celebration.

These locations include dangerous road stretches, main roads, federal and state roads, and 14 rest and recreation (R and R) areas.

JPJ director-general, Datuk Seri Ismail Ahmad said the measure was taken to increase the “perception of being caught” (POBC) committing a traffic offence among road users.

“With the POBC concept, road users will see uniformed officers on duty which would increase their perception of being monitored by the authorities.

“We will take action against road users who break traffic rules,” he said after attending a road safety campaign, here, today in conjunction with the upcoming CNY celebration here Tuesday.

They’re going to catch you! It’s RM300 for each offence…

KUALA LUMPUR, Feb 12 (Bernama) — The Transport Ministry today announced a prohibition on goods vehicles using roads in the country on Feb 17, 18, 21 and 22 to reduce traffic congestion during the Chinese New Year period.

Chinese New Year falls on Feb 19 and 20, which are public holidays, and these vehicles will be also off the roads then. 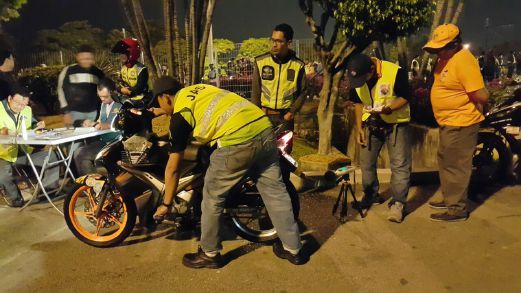 GEORGE TOWN: Motorcycles fitted with noisy exhaust pipes are forced to face the music at a large-scale road block at the Penang Bridge here today.

The Penang Department of Environment (DoE) issued compounds of RM300 to those with machines fitted with modified exhausts.

The DoE is part of a 100-strong team of various enforcement agencies under the Op Tahun Baru Cina at the bridge today.

As of 10pm, some 20 motorcycles with ‘sporty notes’ have been slapped with fines.

A team of seven Penang DoE officers armed with sound level meters and other high tech gadgets measured the noise produced by the exhausts.

A traffic policeman checking a motorcyclist’s licence in Kuching yesterday

KUCHING: The ‘Ops Chinese New Year 2015’ was launched to ensure safety for all road users in the coming festive season, and will be jointly enforced by the Road Transport Department (JPJ) and traffic police throughout the state.

According to the state JPJ’s chief enforcement officer Albert Clement, a special operation to check on all motorcycles had started yesterday.

“We started the ‘Ops Motorcycle’ starting today in collaboration with the traffic police.

“We have stationed 12 static locations from Kuching to Miri to check motorcyclists for their driving licence, road tax and the worthiness of their machines especially the brakes, lights and other technical aspects,” said Albert here yesterday.