In Singapore, there are 900 kiosks available to pay the summonses. You could also pay through http://www.myeg.com.my and http://www.rilek.com.my if you like,

Over half of traffic summonses issued to Singaporeans still outstanding, says Malaysian police

KUALA LUMPUR — A total of 61,057 traffic summonses issued in Malaysia since 2014 have yet to be settled, with over half of them issued to errant Singaporean drivers, said the Malaysian police on Monday (Nov 27).

He said the top offence committed by foreign motorists in Malaysia is driving beyond the speed limit.

Malaysian police have revealed that 81,708 summonses were issued between 2014 and last weekend. Of which 50,616 were issued to Singapore motorists over various traffic offences.

KUALA LUMPUR: Police today confirmed that 61,057 traffic summonses issued since 2014 have yet to be settled, with 37,506 of them issued to Singaporean drivers.

According to a report from TODAYonline, national police traffic investigation and enforcement department director Sharul Othman Mansur said speeding was the most common offence committed by foreign drivers.

Sharul added that despite the high number of unsettled summonses issued to Singaporean drivers, Singaporeans were nonetheless becoming more likely to pay their traffic summonses, as well as to obey Malaysian traffic laws.

He said: “They are starting to obey traffic rules. They are also quick to pay their outstanding summonses.”

Sharul added that there were various ways to pay traffic fines, including both offline and online methods.

Over the last three years, 81,708 traffic summonses were issued in Malaysia. Almost 62% of these were issued to Singaporean drivers.

BRING ALONG YOUR CREDIT CARD TO PAY YOUR FINES!

What if you won’t pay? Of course, no force is involved! If you don’t pay, you won’t be driving. You’ll be sitting in a Malaysian jail till you pay up.

My advice is to leave your Singapore-registered car behind, take a taxi or bus to JB, and rent a car from Hertz or Avis. That’s cheaper than having to pay 30-50 summonses.

DON’T SAY I DIDN’T WARN YOU!

OPERATION “GET YOU TO PAY YOUR FINE” HAS BEGUN!

The traffic police will be in three locations, waiting for you!
1. Jalan Tebrau (towards Kota Tinggi).
2. Eastern dispersal link highway (EDL) at Pandan (towards Woodlands).
3.Second Link Bridge at Tanjung Kupang (towards Tuas).

THIS IS OLD NEWS BUT IT DOESN’T MEAN THAT ‘OPERATION TO GET YOU TO PAY YOUR FINE’ IS OVER.

They’ll get you this week-end. Or at Chinese New Year when you have NEW banknotes. Not to worry, they’ll take Singapore dollars, too! 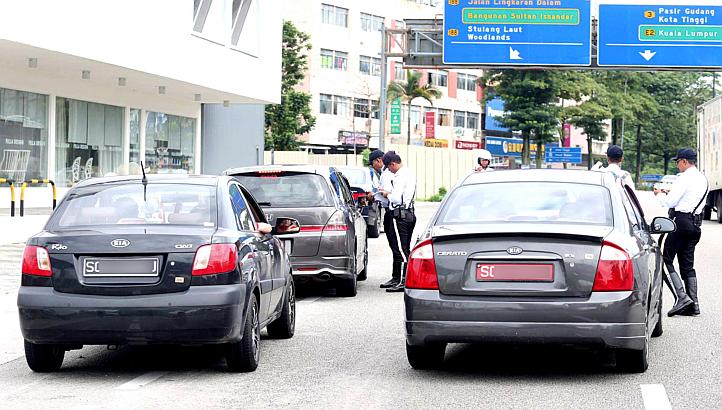 Johor Traffic Police Chief Baharudin Mat Taib told The Straits Times, “We will do this regularly. I would say to all drivers: We are not targeting Singaporeans. We will (conduct these operations) against all errant motorists, including Malaysians.”

While Superintendent Baharudin would not confirm when the next sting operation would be, sources told The Straits Times that it would likely be conducted during the Chinese New Year period, when many Singapore vehicles head to Malaysia.

WHAT IF YOU THINK THE SUMMONSES ARE BOGUS?

Superintendent Baharudin rubbished allegations from motorists that some of these offences were bogus.

“We do not force people to pay their summonses without proof,” he said.

“My advice to Singaporeans is to check whether they have summonses at the traffic police station and to please pay.” 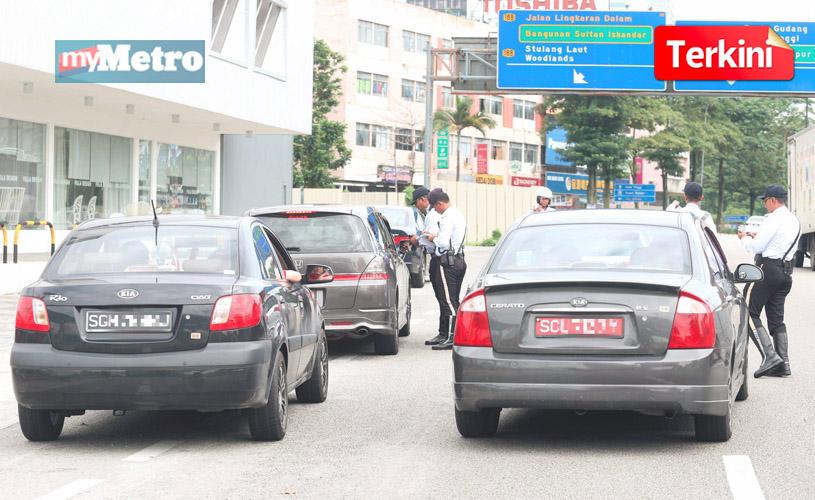 “A total of RM1.3 million was collected through cash payments, while RM1.1 million was paid offenders through a credit card,” he said during a press conference, here, today.

At the first gate, they did a cross checking of your car plate. Those with outstanding traffic offense were forced to stop and they took away your driving license, IC or passport.

You are to line up to obtain your outstanding offense list. We did and I was surprised to find that I have 3, with two of them in 2001 and 2004. I am always careful and I paid my traffic fines promptly. I challenged them and they asked me to go check out at their computer station. I went there and they could not produce. Officer there said 2001 and 2004 was too old. So I asked them to produce the one on Dec 31, 2012. They too could not produce. They simply strong arm and force you to pay.

I lined up to pay. There were 2 long lines. Some have more than 10 items. A guy had 7 or 8 pages and had more than 60 line items. Some poor guys had no money and they were frantic.
…

Those with copy of registration that indicates their date of purchase can have offense prior to that date being temporarily excused. They need to go to JB police station to have them permanently deleted.

As expected, when you paid your fine, they took away your original offense list. I took picture of the slip earlier and encouraged everyone around me to do likewise.

“For those having doubts (about receiving any summonses), we have opened a counter for reference, or they can check by phoning in,” he told reporters after attending the state police contingent’s monthly assembly and programme with the community, here, today.

Starting yesterday, the operation is on until Jan 2.

The jam is unrelated to police collection of fines for unpaid summonses.

Motorists stuck in jam for hours at Second Link, trying to get back to Singapore

Motorists stuck in jam at Second Link for hours this evening http://ow.ly/Gv2mo 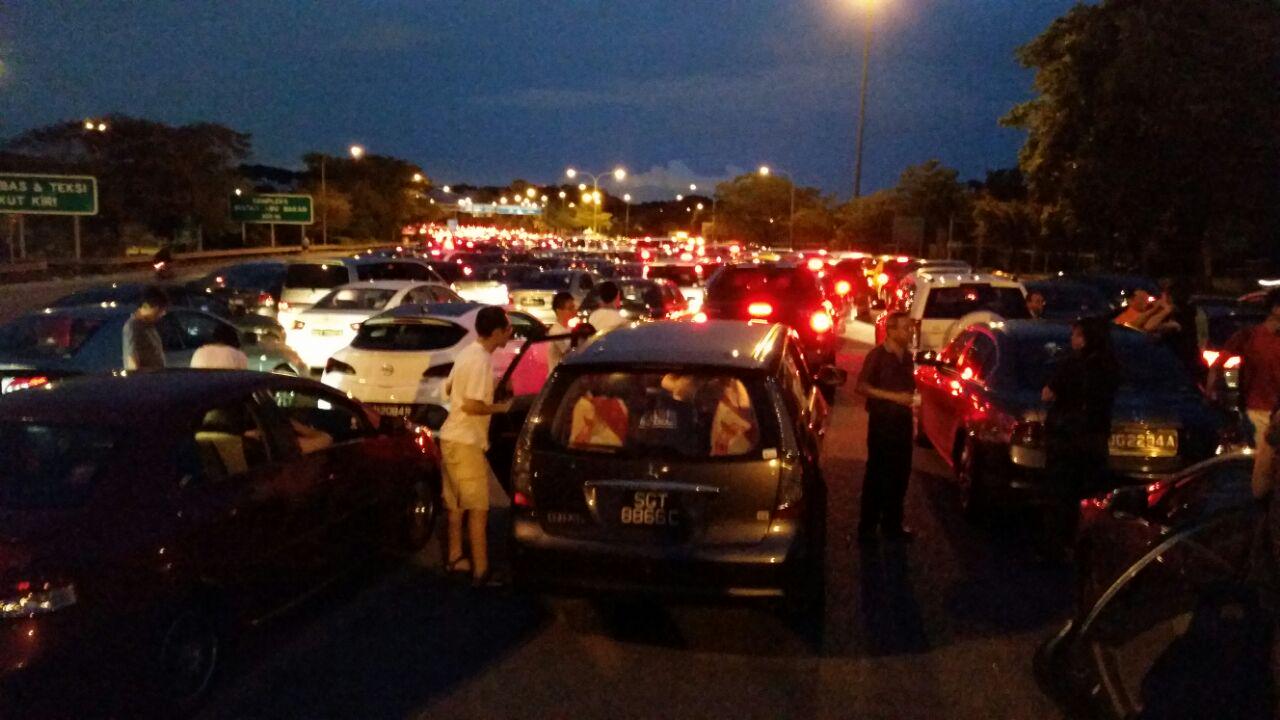 The high volume of holiday-makers using the Second Link to return to Singapore caused a bad traffic build-up this evening (Dec 28).

At 8pm, The New Paper reader Shaharina Ahmad, 41, said she had been stuck on the Second Link for three hours.

“Tuas Second Link is always the smoother and easier border-crossing but in the last three hours, we only moved 15 to 20 metres. I am still at the first checkpoint,” she said.

MALAYSIAN GOVERNMENT TO SINGAPOREANS: WE WANT YOUR MONEY, THAT IS, THE MONEY YOU OWE US!

WE’LL GET IT ANY WAY WE CAN!

RSD’s Mr Tam said that road transport authorities have been working on an electronic mechanism to blacklist and suspend foreign drivers if they fail to pay their fines – which cost between RM150 and RM300 for speeding and parking offences. 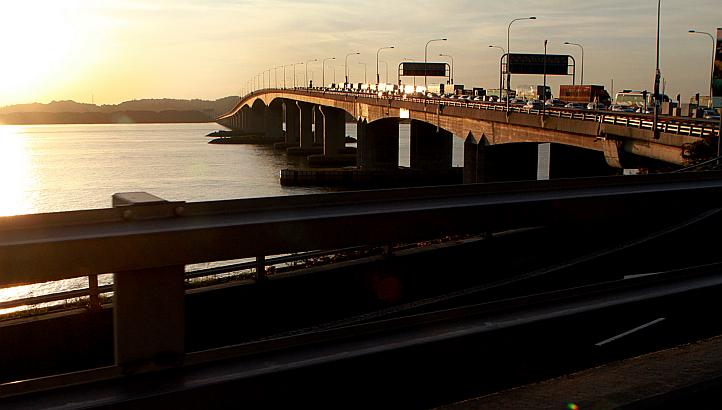 The Malaysian authorities have been working on a system to blacklist repeat traffic offenders from Singapore and block them from driving into Malaysia, an official here said, following a car crash that killed Hong Leong scion Kwek Kon Chun on Sunday.

While the cause of the crash is still unknown, it has sparked an outcry against Singaporean drivers, who are accused of speeding recklessly on Malaysian roads.

The new electronic system aims to rein in drivers from the Republic who flout rules with no fear of punishment, Road Safety Department (RSD) chief Tam Weng Wah told The Straits Times on Tuesday.
…

MALAYSIAN GOVERNMENT TO SINGAPOREANS: WE WANT YOUR MONEY, THAT IS, THE MONEY YOU OWE US! We’ll get you with our tracking system once we have installed it. 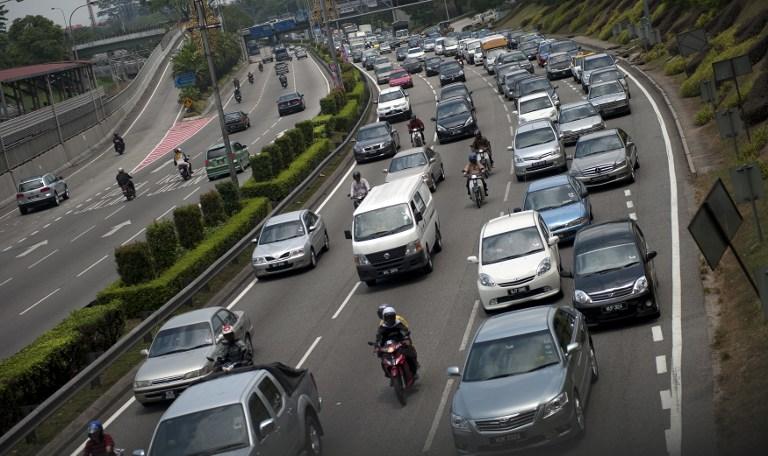 Its secretary-general Mohamad Khalid Shariff said the system was among the methods to be implemented by the ministry to solve the problem on unpaid summonses among foreign traffic offenders. He said under the provision, the enforcement agency involved would also be equipped with plate number scanners or automated number plate recognition (ANPR) at all entry points to Malaysia.

“Through this system, we hope we can solve the issue of paying summonses involving foreign nationals, specifically Singaporeans, because at every entry point to Malaysia, foreign vehicles would be scanned by ANPR to check for their traffic offences.

“This means, they must settle their summonses before leaving the country,” he said during a ‘Session with the Media: Series 3 of the Auditor-General’s Report 2013′, in Kuala Lumpur on Wednesday (Nov 12).

KUALA LUMPUR: Singapore-registered vehicles top the list of foreign vehicles that have unsettled summonses, as revealed by the third series of the Auditor-General’s Report 2013.

“Singaporeans top the total number of summonses with 84,604, followed by Brunei with 25,803,” the report said, adding that only 12,713 summonses had been settled, with RM7.63mil left unpaid.