Sharing your food with rats, flies and other pests: that’s Malaysia!

YIKES! COULD YOU HAVE EATEN SOME OF THE FOODSTUFF IN A COFFEE SHOP OR STALL?

This fishball and dim sum manufacturer at Paya Terubong, Penang, probably distributes its products all over the island. 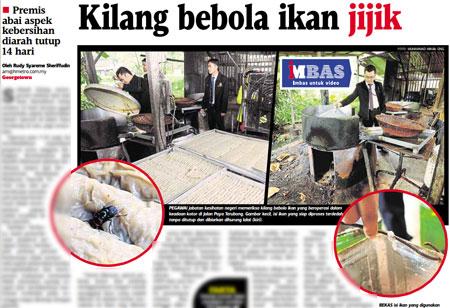 GEORGE TOWN: A fishball and dim sum manufacturer at Paya Terubong here was issued a two-week closure notice after the Penang Health Department found the premises to be in unhygienic conditions during a spot check today.

A 15-strong team, including Penang Island Municipal Council (MPPP) officers, had found rat droppings and flies in the storage room where products were kept.

They also found that used cooking oil was thrown into drains while containers which the products were kept in were placed on the floor.

An officer from the Penang Health Department points at flies hovering above fish cakes that were processed at the factory in Paya Terubong this morning. SUNPIX by MASRY CHE ANI

In addition to the order to close, MPPP also issued six summonses in relation to unhygienic conditions.

A spokesman said the operator was required to clean up the premises within the two-week window.
..

An officer from the Penang Health Department points at flies hovering around fish cakes that were processed at the factory in Paya Terubong this morning. SUNPIX by MASRY CHE ANI

‘Roti benggali’ was very popular until the secrets poured out last week.
…

SECRETS are crawling out of the roti benggali, Penang’s all-time favourite crusty bread, leaving many of us with no stomach to eat it ever again.

First, there was talk some time ago that the bread makers were using their bare feet to knead the dough. Being an unflappable buyer of the bread sold all over Penang and also limitedly in the Klang Valley, I would have none of that story at the time, thinking that it must be one of those mischievous online hoaxes.

But last week, my tummy did a Hugo Sanchez somersault, while a lump built up in my throat when I read news reports about what health authorities found when they conducted spot checks on several roti benggali bakeries in Penang. Pictures accompanying the stories were graphic and, obviously, did not lie. They were enough to make me sick for days on end.

They found rat droppings in one of the bakeries, which also had two trolleys with stacks of dough left beside the toilet with its door ajar, when the raiding party came while bread was being made.

According to the report, officers conducting the checks also discovered human hair-like items in a container with oil, which was used to knead the dough. Several workers were simply throwing excess dough on the wet floor instead of collecting them in a bin for disposal later.

On top of it, none of the 10 workers was wearing a hair cover, gloves or a face mask, although it is a requirement under the law. This bakery it seems, was a popular one on Jalan Dato Keramat in George Town. But similar conditions were found in five others — two each in Kepala Batas and Nibong Tebal, and another in Bukit Mertajam. I still feel the authorities should name and shame them.
…

Roti benggali, a French loaf-type of bread with a golden, crispy crust, is a staple in the northern region and has been a favourite for ages. Though it is best eaten dipped in flaming hot curry, slices of roti benggali are a common feature for breakfast, served with soft-boiled eggs. Its appeal, especially when hot from the oven, often extends all day, with butter and kaya spread or dipped in mutton soup on cold, rainy evenings.

RATS ALIVE! Another bakery, this time in Kepalas Batas, has rat droppings everywhere.

The trays, butter and eggs were found placed on the dirty floor of a bakery during the raid. Pic courtesy of State Health Department

GEORGE TOWN: Another bakery in the state has been sealed after their baking section was found covered with rat droppings.

The bakery in Kepala Batas was found to be just as revolting as the “Roti Bengali” outlet in Jalan Dato Keramat here. The outlet’s baking section’s floor was similarly coated with rat droppings.

However, no rats were spotted when a 10-man party, led by the State Health Department, raided the bakery in the northern town on the Penang mainland.

As a result, the department slapped the operator with a two-week closure order.

They also found an industrial fridge with mildew both inside and outside the appliance.

Health inspectors found trays of bread dough and other baking items exposed to the fungus.

The workers were also not properly clothed and did not use gloves and head covers while on duty.

FRESH BREAD LOOKS, SMELLS AND TASTE SO DELICIOUS BUT YOU WOULDN’T REALLY WANT TO EAT THIS! 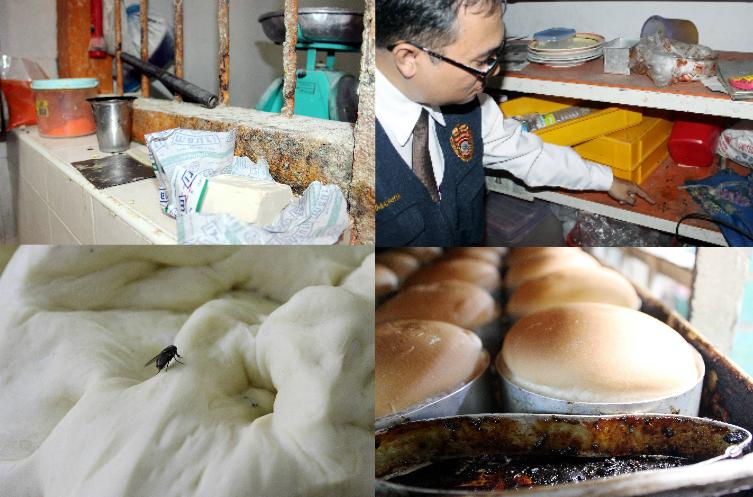 GEORGE TOWN: A leading bakery in Jalan Datuk Keramat here was sealed off for two weeks after State health authorities found rat droppings in its premises during a spot check today.

Although health inspectors did not find any rats during the two-hour long spot check on the bakery, which is popular for its roti Benggali, they found to their surprise that two trolleys with stacks of dough left beside the toilet, with its door ajar in the operation which began at 9am.

Grossing out the officers, from the Northeast District Health Department, was the discovery of human hair-like items in a container with oil, which are used to knead the dough.

The raiding party also found to their disgust that several workers were simply throwing excess dough on the wet floor instead of collecting them in a bin for disposal later.

Checks later revealed, the premises was devoid of any bins for the disposal of unwanted food wastes or other materials.