There is no justification for the Johor Causeway Toll Hike!

THE BUS COMPANY GAINS! AND SO DO THE STALL-HOLDERS AT THE CIQ COMPLEX.

Lim Han Weng, managing director of Handal Indah Sdn Bhd, which is the operator of Causeway Link bus services, said the number of those travelling by bus into the republic had increased by between 10% and 20%.

“Since the new toll rates started on Aug 1, we have noticed more passengers queuing for buses and there is less traffic congestion on the causeway,” he said yesterday.

He assured commuters not to worry about the availability of buses as there were 150 buses at the company’s disposal with each making four to five trips daily.

USING THE PEACEFUL ASSEMBLY ACT, POLICE ISSUE SUMMONSES TO ADD TO THE ALREADY INFLATED COST OF USING THE CAUSEWAY! 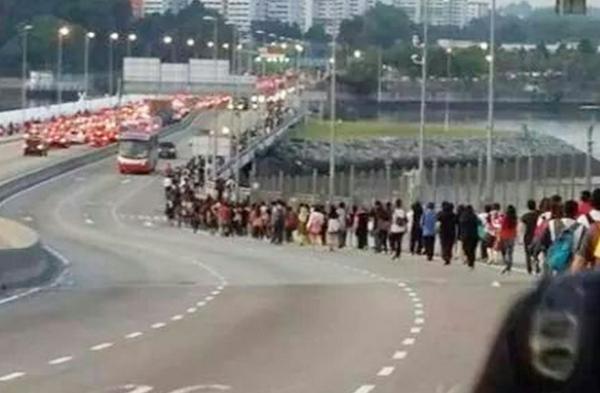 JOHOR BARU: Police have initiated investigations against those responsible for blocking traffic at the Sultan Iskandar Building’s Customs, Immigration and Quarantine (CIQ) Complex here on August 1.

“We (police) took immediate action as role was to ensure that the roads were clear and public order was maintained,” he said at the Johor Baru Selatan police headquarters here today.

“I assure the public that police are investigating all possible angles that led to the incident at the CIQ on that day,” he said, adding that police will forward the investigative papers to the Deputy Public Prosecutor for further action.

Kluang MP Liew Chin Tong, “All these hardships are imposed because the cronies have to be paid for the highway and other projects they built….It is totally unacceptable.”

A day after the toll on cars entering the Johor Causeway was introduced, the impact was felt by shops and petrol stations in Johor Baru, with many reporting fewer Singaporean customers, said the Straits Times today.

The Sunday Times, the weekend edition of the Singapore paper, said the smooth traffic flow from Singapore at the Causeway on Saturday morning was evidence of the toll hike.
…

“It usually takes up to two hours just to enter, but today, it took us less than an hour,” Fran William, 35, told the Sunday Times.
…

A boutique in Johor Baru reported a drop of about 40% in sales, said ST, while a shoe shop assistant said there were fewer Singaporean customers.

“Today (Saturday) is like a weekday – there is hardly anyone,” boutique sales assistant Fariha Razak was quoted as saying.

A petrol station near the Johor Baru checkpoint reported fewer Singaporean customers, estimating a drop of about 20% in the last two days.

But the paper noted that not all Singaporeans have been discouraged by the new toll rates. Many can still save up to S$40 (RM104) if they filled their tanks in Malaysia. Groceries are also half the cost on this side of the Causeway.
…

“All these hardships are imposed because the cronies have to be paid for the highway and other projects they built.

Solidariti Anak Muda Malaysia (SAMM) has urged public transport operators and other stakeholders to stage protests against the drastic toll hike at the Johor Bahru Customs, Immigration and Quarantine (CIQ) complex which is the gateway to Singapore.

Mohd Azrol said he agreed with imposing charges on foreign vehicles entering Johor but not through this toll as it affects all Malaysians.

He questioned whether the federal government was out to stifle development in the state with the drastic toll hike and urged the Johor Palace to intervene.

Watch what greed led to…

Stranded Malaysians walk across the Causeway

Making it on foot: Malaysian factory workers working in Singapore walking across the Causeway.

JOHOR BARU: Hundreds of Malay­sians stranded by the blockade took to crossing the slightly over 1km Causeway on foot after waiting for buses that never came.

Many of the commuters, who included schoolchildren, their family members and factory workers, were not even aware of the blockade which forced traffic to a standstill. Some even decided to turn back and skip work for the day.
…

IT Specialist Aaron Winson, 30, said he was walking with the crowd, who by about 5am, had swelled to hundreds.

“I have been working in Singapore for the past eight years and have never seen such an incident. I noticed some schoolchildren walking with their grandparents,” he said, adding that some decided to turn back halfway across the Causeway while others rested before resuming their walk.
…

At the height of the incident, Singapore’s Land Transport Authority said on its website that all transit buses between Singapore and Johor had been suspended and would only resume at 11am.

Stranded Malaysians walk across the Causeway

What’s going on in Johor Bahru? shared a link.

Protesters at CIQ complex will be arrested if repeat offence

JOHOR BARU: Police did not arrest any factory bus drivers behind the chaos at the customs, immigration and quarantine complex at the Sultan Iskandar Building this morning.

They only advised the drivers to refrain from causing the chaos again.

However, action will be taken against those who repeat the same act from now on.

Johor Baru South deputy OCPD Supt Mohd Nadzir Ghulam Kadir said the chaos started at about 4.15am and ended about 8am, when those who involved in the chaos were asked to drive away their vehicles from the bus lanes leading to the complex.

He said about 200 factory buses were choking the bus lanes.

“Some 120 bus drivers later met officers from the Malaysia Highway Authority and others, and told the authorities how unhappy they were about the toll hike.

Protesters at CIQ complex will be arrested if repeat offence

JOHOR BARU: The Works Ministry has confirmed that the chaos at the customs, immigration and quarantine complex at the Sultan Iskandar Building here this morning was caused by two factory bus drivers who refused to pay toll at the complex.

In a statement, the ministry said it viewed the case seriously and stern actions based on the provision of the laws will be taken against the two irresponsible drivers.

NO STRIKE: M’sia Work Ministry denies there being any strike by bus drivers this morning http://cna.asia/1sajuAv  pic.twitter.com/21WoV5SSSl 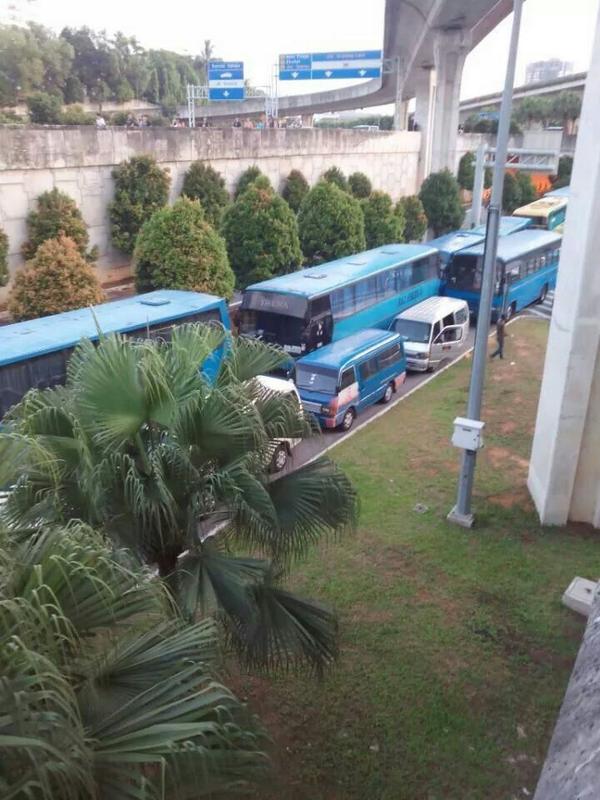 Protest at Johor checkpoint believed to have been instigated by two bus drivers: Reports http://bit.ly/1kays8m

Thousands of #Malaysia workers forced to walk into #Singapore due to #Causeway toll hikes http://bit.ly/1xIc86T  pic.twitter.com/kzsMbL0LON 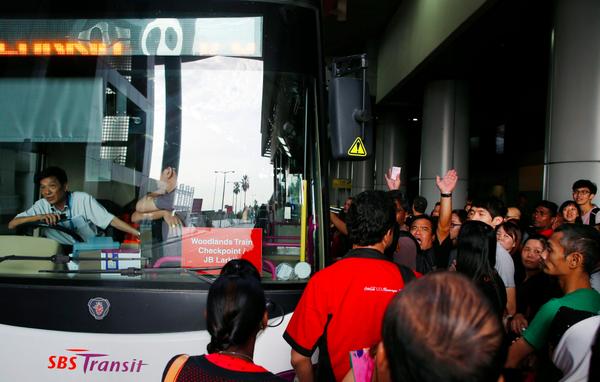 The only winners of the CAUSEWAY TOLL WAR are the governments from both sides pic.twitter.com/SHFPJ0Y7IW 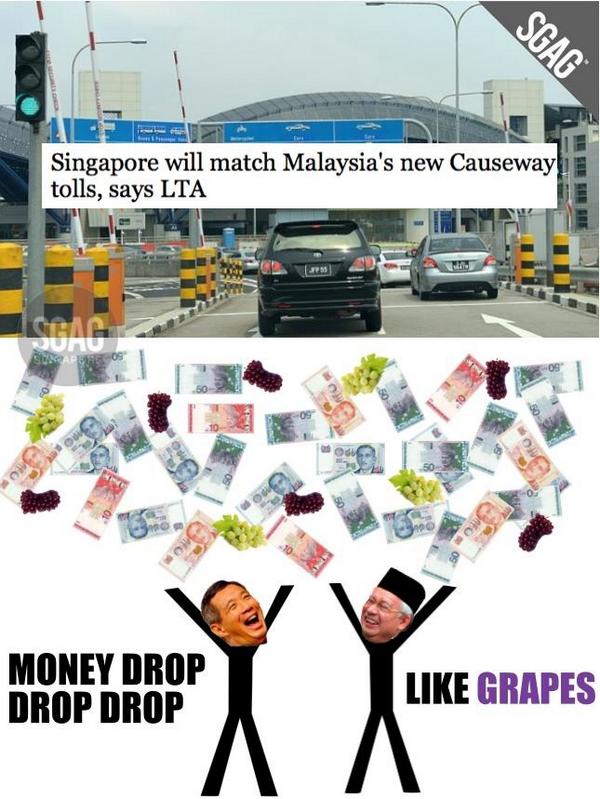 Private buses refusing to pay the increased toll at the Johor Bahru Customs, Immigration and Quarantine (CIQ) centre this morning wreaked havoc on the causeway traffic this morning.According to Singapore’s Zaobao, the ‘bas kilang’ ferrying workers to Singapore daily “went on strike” at 5am when told to pay the new rate at a 570 per cent increase.
Their refusal to budge caused a massive traffic jam right across to the Singapore checkpoint.”We are outside of CIQ with bas kilang drivers who refused to pay the new toll. They caused a massive jam since 5am.”Customs and police (officers) told them to either enter or leave, but promised to announce a decision on the new toll in a week’s time.”The bas kilang drivers promised a huge protest a week later if the decision/announcement is not acceptable,” posted Johor PKR leader Steven Choong on his Facebook this morning.
…
Malaysian authorities, meanwhile, confirmed to Channel NewsAsia (CNA) reporter Sumisha Naidu later tweeted in the morning that the strike ended about 8am, but they were uncertain about what had sparked the protest.
..
CNA said Singapore’s Land Transport Authority (LTA)  also sent out an advisory at 8.05am saying that bus services 160, 170, 170X and 950 – which regularly ply the causeway –  have cut their services to Johor Bahru until further notice.The suspension was due to a “protest against increase in Malaysian toll fees by Malaysian bus operators which impeded flow of bus traffic through the Johor Bahru Checkpoint,” the advisory said.

JOHOR BARU: Thousands of Malaysians working in Singapore have to walk across the Causeway to get to work in Singapore as the bus lanes at the customs, immigration and quarantine complex at the Sultan Iskandar Building were choked with hundreds of factory buses from as early as 4am.

Factory bus drivers refused to drive into the complex in protest against the toll hike effective today, and they want the authorities to address the matter with them immediately.

As they refused to drive into the complex, their vehicles choked up the bus lanes which affected hundreds of cross-border stage buses, express buses and tour coaches from entering the complex as well.

To ensure they get to their workplace in time, all who depend on factory buses, express buses and stage buses to get to work in Singapore have no other options but to alight from the buses and walk all the way to the CIQ Complex at Woodlands, Singapore, through the 1.056-kilometre long Causeway.

JOHOR BARU: Motorists travelling to Singapore via the Causeway must now pay a total of RM16.50 for inbound and outbound toll charges at the Bangunan Sultan Iskandar Customs, Immigration and Quarantine (CIQ) Complex.

A spokesman from the Eastern Dispersal Link (EDL) Expressway said that the new toll rates started at 12.01am on Friday.

THE NEW TOLL RATES FROM 12.01AM,1 AUGUST 2014, TARGET JOHOREANS, PARTICULARLY THOSE WHO TRAVEL TO AND FROM SINGAPORE FOR WORK OR SCHOOL! 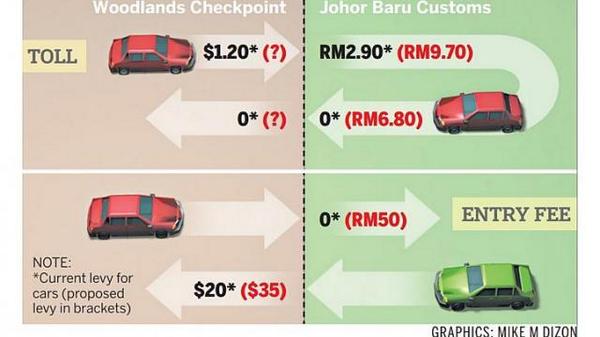 Many are unhappy with the Johor state government’s announcement on 24 July that the toll rates will be increased for vehicles traveling at the Customs, Immigration & Quarantine (CIQ) Building Sultan Iskandar, Johor Bahru. Starting from August 1st, all vehicles travelling through the causeway into or out of Malaysia will have to pay a toll of RM9.70 from the RM2.90 which had been previously imposed.

Online business owner, Derrek Ho, 26, said the hike would not cause much pain to Singaporeans but Malaysians would be the ones who end up hurting the most.
…

Housewife Lee Liin Pei, 49, who sends her two children to study in Singapore, is certain that school bus and van companies would increase their charges in tandem.

“A lot of Malaysians send their children to Singapore to study and there will be parties who would take advantage to hike up the price of their services,” she said.
…

“I do not think Singaporeans mind paying the amount, but I pity the Malaysians, who may have to pay an additional RM330 a month to commute to Singapore daily for work,” he said.

Malaysians, your Government is intent on taking a huge chunk of your hard-earned money Singapore dollars!

FROM 1 AUGUST 2014, IF YOU ARE MALAYSIAN AND TRAVEL TO AND FROM SINGAPORE DAILY FOR WORK, EXPECT TO ME VERY MUCH POORER.

IT DOESN’T MATTER IF YOUR CAR IS MALAYSIAN-REGISTERED OR SINGAPORE-REGISTERED. The new rates apply to ALL cars.

Currently,cars leaving JB for Singapore pay nothing. From 1 Aug, each car will be tolled RM6.80!

Incoming cars from Singapore used to pay RM2.90 but the new charge will be RM9.70.

Like Loading...
This entry was posted in Uncategorized and tagged JB Causeway, JB Causeway toll, JB-Singapore, Singapore tolls, There is no justification for the Johor Causeway Toll Hike. Bookmark the permalink.

1 Response to There is no justification for the Johor Causeway Toll Hike!