SATURDAY, 31 MAY 2014: THE SINGAPORE POLICE WILL SOON ASK FOR DETAILS. Wait for imminent arrest and charging of the cement truck driver.

The cement truck driver who was caught on camera going against traffic flow, thus causing other motorists to stop and swerve out of its way, has been arrested by Police.
…

The Police have responded to Victor’s Stomp report in a statement that mentioned the arrest of the driver.

Said a spokesperson for the Police:

“Police have arrested the driver for the offence of Rash Driving under Section 279 of the Penal Code, Chapter 224, and investigations are ongoing.

“The Traffic Police would also like to request for the person who had witnessed and uploaded the video, and/or anyone with further information to come forward to contact Traffic Police at SPF_Feedback_TP@spf.gov.sg to assist with ongoing investigations.

Cement truck goes against traffic at Sembawang, forcing motorists to stop and swerve out of its way 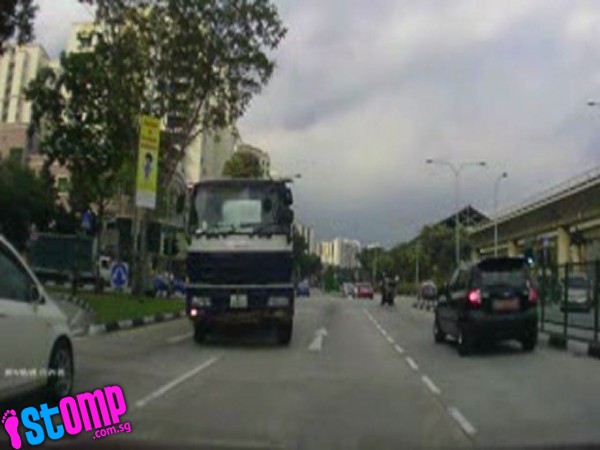 Stomper Victor sent this video to Stomp, which shows a cement truck goes against the flow of traffic at a traffic junction in Sembawang Drive.

In the video, the the truck is stopping while making a righ-turn.

The vehicle than reverses before turning into the opposite side of the road.

Other drivers can bee seen stopping and swerving out of the way of the large truck.

Like Loading...
This entry was posted in Uncategorized and tagged Cement truck goes against traffic at Sembawang. Bookmark the permalink.