The passenger airliner carrying 239 people disappeared without a trace four years ago and two huge international investigations have failed to recover it. Mr Boyer claims he has found satellite images that show the wreckage of MH370 after it crash-landed. He believes he can identify different parts of the broken plane in images found on Google Maps and Apple Maps.

However, official investigations concluded that the jet most likely landed in the Indian Ocean.

This week, relatives of the people on the plane presented to the Malaysian government new debris found believed to belong to MH370.

Despite this, Mr Boyer maintains he has found the crash site.

He claimed he has spotted the engine based on comparing its known size with the distances on the image provided by Google Maps. 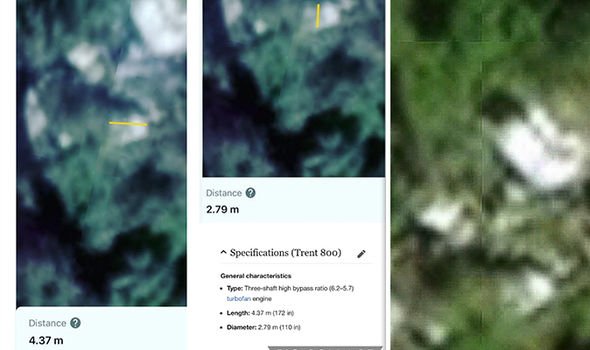 He said: “These images are measurements of what looks to be the turbine engine of MH370.

“I measured the piece and they match exactly.”

The part-time ‘plane-hunter’ also believes he can see the fuselage and nose of the plane in his pictures.

Grace Subathirai Nathan (L), whose mother was on the plane, and Jacquita Gonzales, the wife of MH370 flight steward Patrick Gomes, show pieces of debris found off Madagascar believed to be from the aircraft. (Photo: AFP/Mohd Rasfan)
.
PUTRAJAYA, Malaysia: Relatives of those on board Malaysia Airlines flight MH370 on Friday (Nov 30) handed over new-found debris believed to be from the ill-fated plane, hoping it could help shed light on the jet’s mysterious disappearance four years ago.

The Boeing 777 jet with 239 people on board vanished on Mar 8, 2014 during a routine flight from Kuala Lumpur in the world’s greatest aviation mystery.

An official report released in July following a lengthy investigation and years of fruitless searching gave no new clues about why the plane disappeared, sparking anger among relatives.

They were turned over to Malaysian Transport Minister Anthony Loke on Friday at his office in the administrative capital Putrajaya outside Kuala Lumpur.
.

MH370 next of kin handing over new debris to MOT . The five pieces said to belong to the Boeing 777 aircraft that’s still missing more than 4 years on with 239 on board pic.twitter.com/1o8GTMhOll

The next-of-kin of passengers of the Malaysia #MH370 today handed over five pieces of debries to the Transport Minister, @anthonyloke pic.twitter.com/bCTtwbp36S

One of five pieces of debris is said to contain a label with serial number of floor panel believed to belong to MH370 pic.twitter.com/FGomrEPC9S