Posted on December 9, 2016 by weehingthong

Too full of herself?

This is not the first time that the actress-model has created a firestorm on social media.

In October this year, she had courted controversy by posting a photo of herself on Instagram wearing an army jacket, with full badges and credentials, over her normal clothes.

Netizens took to social media to condemn her for mocking the “respected uniform of the Malaysian armed forces”.

She later apologised saying she had no such intention and had not realised about the ethics of wearing the uniform. She “truly apologised” and said she had deleted the post. 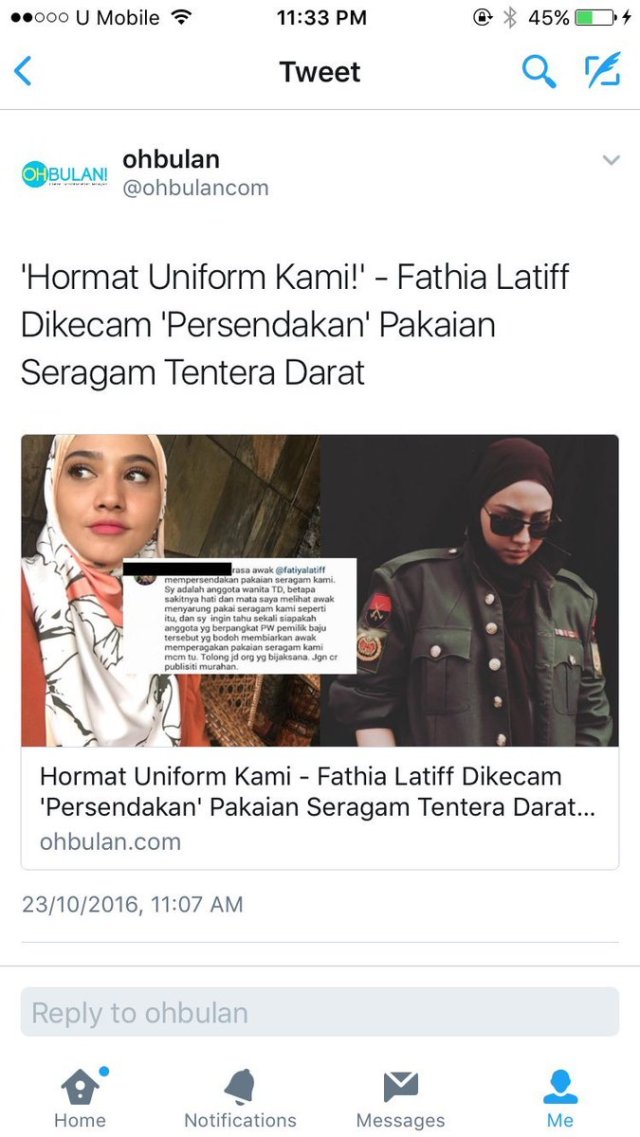 Stop picking on her. It says more about you than about anything else.

Nasty to do this to her

It is the second time in three months that Nur Fathia Latiff has come under fire on social media, after being told off for mocking army uniform in October. 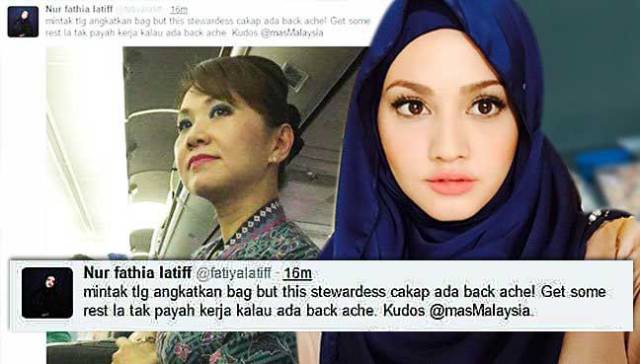 PETALING JAYA: Malaysian actress Nur Fathia Latiff has come under attack on social media over a tweet she had sent following a flight she took on Malaysia Airlines (MAS) late last week.

Posting a photo of a MAS stewardess, presumably without permission, Fathia complained that she had asked the former to lift her bag into the overhead compartment, but the request was turned down.

In her tweet, which has since been deleted, Nur Fathia stated that if the stewardess was experiencing a back ache, she should just get some rest and not work.

This did not go down well with thousands of Malaysians, who took to social media to voice their outrage at the nerve of the actress to ask the stewardess to carry her bag when it was not her responsibility.

One user on Facebook came down especially hard on Nur Fathia, asking: “Do you think air stewardesses are there to carry your bags? ”

Another FB user also highlighted an airline inflight magazine which pointed the terms and conditions for carry-on luggage in a commercial aircraft.

Under the topic “Cabin Luggage Handling”, the magazine highlighted that “cabin crew are not required to stow passenger’s hand luggage into overhead stowage compartment”.

“This is to minimise occupational hazard and ergonomic risks faced by cabin crew in the aircraft. Passengers who are fit and and in good health must carry, stow and secure their own hand luggage on board,” it said.

Realising the backlash from her tweet, Nur Fathia deleted her tweet, and tried to defend her original comments by posting a response to those who critised her.

On Sunday, the actress tweeted “I didn’t command her to carry the bag. I was just asking her favor to assist me to put the bag in the overhead compartment.”

She took it further by then accusing the stewardess of being “rude by raising her voice and making faces”.

“It doesn’t matter wherever you (sic) sit. Economy or business. Etiquette is etiquette,” she wrote on her Twitter page.

But by then the damage had been done.

Like Loading...
This entry was posted in Uncategorized and tagged actress gets backlash for criticisng air stewardsess, nur fathia latiff actress. Bookmark the permalink.