Did 50 taxidrivers attack 1 Uber driver and his 2 passengers?

#AWANInews
Guideline to coordinate taxi, Uber and GrabCar services must be provided quickly

KUALA LUMPUR: A guideline to coordinate taxi, Uber and Grabcar services must be provided quickly to produce a balance and healthy competition between the operators of the services.

Land Public Transport Commission (SPAD) chairman Tan Sri Syed Hamid Albar said the guideline was crucial for the taxi and Uber issue to be settled as soon as possible.

“We should not also dismiss the request of the consumers who like the service of Uber. But at the same time we will boost the quality of the taxi service and let the taxi drivers compete fairly and justly,” he told reporters after attending a breaking of fast by SPAD here, today.

Syed Hamid said SPAD had sent a motion in the taxi (industry) transformation programme to the Cabinet in the effort to enforce and boost the quality of registered taxi service in the country, other than encouraging a healthy competition in the industry.

On June 18, SPAD announced that in its Taxi Industry Transformation Programme proposal to the government, among others, clarified on the need to allow under the law the Uber and GrabCar services and to level the playing field for taxi drivers. 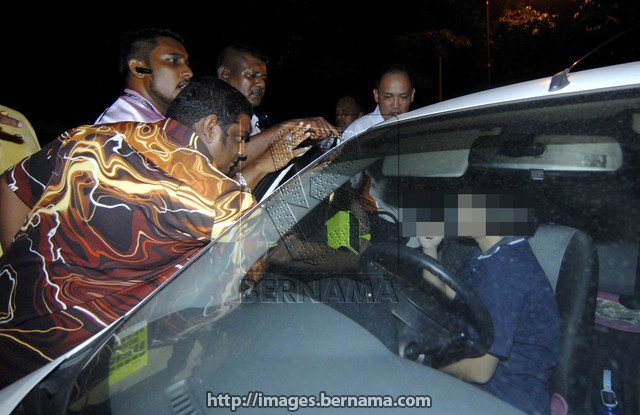 Taxi drivers may find themselves with even fewer customers if some of them continue to assault drivers and passengers of ride-sharing services such as Uber and GrabCar, said Land Public Transport Commission (Spad) chief Syed Hamid Albar.

“We need to think before we act. Don’t act according to emotions. The more we protest, the more people want to use Uber and Grabcar as all it takes is an application.

KUALA LUMPUR: Police today refuted reports that a tourist was injured when more than 50 taxi drivers attacked an Uber car at KL Sentral.
.
Brickfields police chief Assistant Commissioner Sharul Othman Mansor said there was the commotion only took place between one taxi driver and an Uber driver.
.
“The incident took place at 12.30pm on Monday.
.
“The Uber vehicle, which was ferrying an Iranian passenger to her destination, was obstructed by two or three taxi drivers.
.
“This led to an argument between them,” he said.
.

Shahrul denied reports of a broken car window, supposedly resulting from an object thrown towards the Uber vehicle.

The driver and his customers, an Iranian couple, were pulled out of the car before the taxi drivers used rocks to break the car window.

PETALING JAYA: A female tourist was left injured after more than 50 taxi drivers struck the Uber car she was traveling in at KL Sentral yesterday.

According to the China Press, the incident occurred on Monday morning when the Iranian couple, who had recently touched-down in Malaysia, were using the Uber service.

More than 50 taxi drivers, who were “hiding” in KL Sentral, pounced on them as soon as they entered the Uber car.

The couple, along with the Uber driver, were pulled out of the car before the suspects used rocks to break the car window.

The injured female tourist was then taken to the Kuala Lumpur Hospital for treatment.

This follows attack on Uber driver and Iranian tourists travelling in his car at KL Sentral on Monday.

“We are deeply concerned by recent media reports alleging taxi drivers harassing and attacking e-hailing service providers such as Uber drivers as well as their passengers.”

He was apparently referring to the attack on a Uber driver and passengers that left a female Iranian tourist injured at KL Sentral. 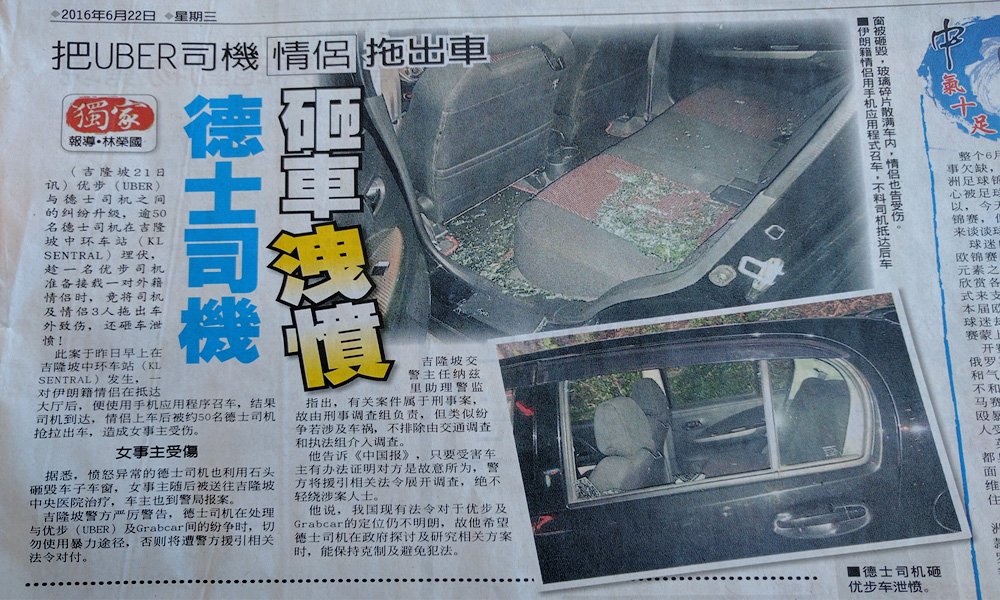 …
Some 50 taxi drivers are reported to have ambushed an Uber driver and two passengers in Kuala Lumpur, injuring one of the passengers.

According to a report in the China Press today, the drivers had been lying in wait at KL Sentral on Monday morning, when the Uber driver arrived to fetch an Iranian couple.

“The Iranian couple arrived at the lobby and used a phone app to call for their ride. When the driver arrived, the couple got into the car but were dragged out by about 50 taxi drivers, causing injuries to the woman.

“It is understood that the uncharacteristically angry taxi drivers also used stones to break the car’s windows.

“The woman was subsequently sent to Kuala Lumpur Hospital for treatment, while the car owner has lodged a report at a police station,” the daily reported.

Following the incident, the Kuala Lumpur traffic police chief Nazri Hussain is reported to have told China Press that the case has been classified as a crime and has been handed to the Criminal Investigations Department.

However, if the incident turned out to be a dispute arising out of a traffic accident, the Traffic and Enforcement Department may take over investigations instead.

2 Responses to Did 50 taxidrivers attack 1 Uber driver and his 2 passengers?