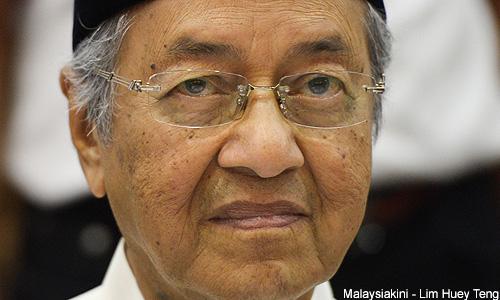 On being a proxy

1. It is true when Najib says he did not do what I advised him to do. But that is not the reason why I want him to step down.

2. Everyone knows that I campaigned for him in the 13th General Election even though he refused to build the bridge, or the double-tracking and electrification of the railways. He also did not accept my views that BR1M and carrying placards “I Love PM”, “1M4U” etc should be stopped. Nor did he accept many other things I told him not to do or to do if he wanted to be popular. He says “Cash is King”. Still I supported him during the 13th General Elections and after.

3. I did not ask him to step down until the 1MDB scandal. He did not answer to the accusation made against him.

4. Najib has his own advisers, including three Brits. He paid foreign consultants to advise him on Government matters. He also asked Singapore whether he should build the bridge or the high-speed train. When Singapore said no, he shelved those projects. Jho Low is his friend and seems to have considerable hold on him.

5. The fact is that he is their proxy not mine. If he had behaved as my proxy there would have been no 1MDB etc.

1. I welcome the proposal that the authorities should stop investigating the banking affairs of Dato Sri Najib but instead investigate the allegation by Tunku Aziz that I lost RM600 million in the 80’s.

2. The need is to determine whether the money went into my account at the bank or the money was lost due to the London Market Exchange ruling that the tin bought by us from sellers need not be honoured.

3. If there is evidence that the money went into my account, please charge and arrest me. It is not too late.

4. This offer by me is not intended to deflect attention from the current investigation of Najib’s account. I just want to make people happy.

Dr M: Let Najib go, come after me instead

Dr Mahathir Mohamad sarcastically suggested today that the authorities should stop investigating the alleged misappropriation of funds by Prime Minister Najib Abdul Razak and should instead go after him.
…

“I welcome the proposal that the authorities should stop investigating the banking affairs of Najib but instead investigate the allegation by Tunku Aziz that I lost RM600 million in the 80’s,” Mahathir said in his blog posting today.

He said this in reference to the accusation by Tunku Abdul Aziz Ibrahim, a member of the Malaysian Anti-Corruption Commission advisory board, that Mahathir was guilty of worse financial scandals in the past.

Mahathir went on to challenge the authorities to arrest and charge him, if there was evidence he had misappropriated funds when he was prime minister until 2003.

“If there is evidence that the money went into my account, please charge and arrest me. It is not too late.