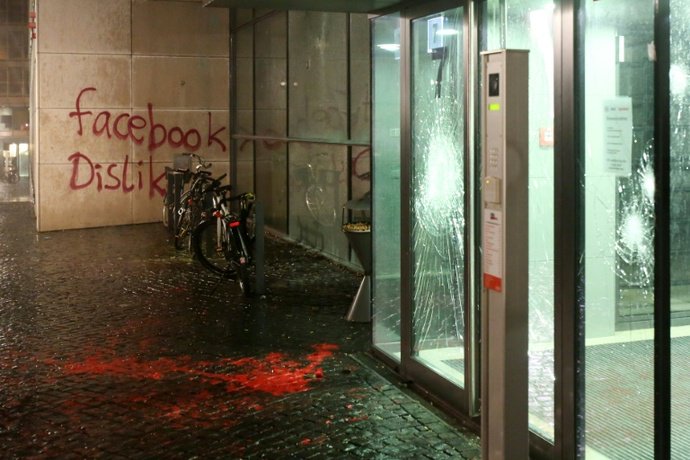 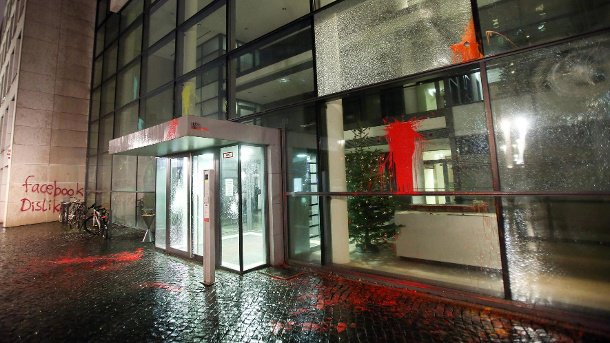 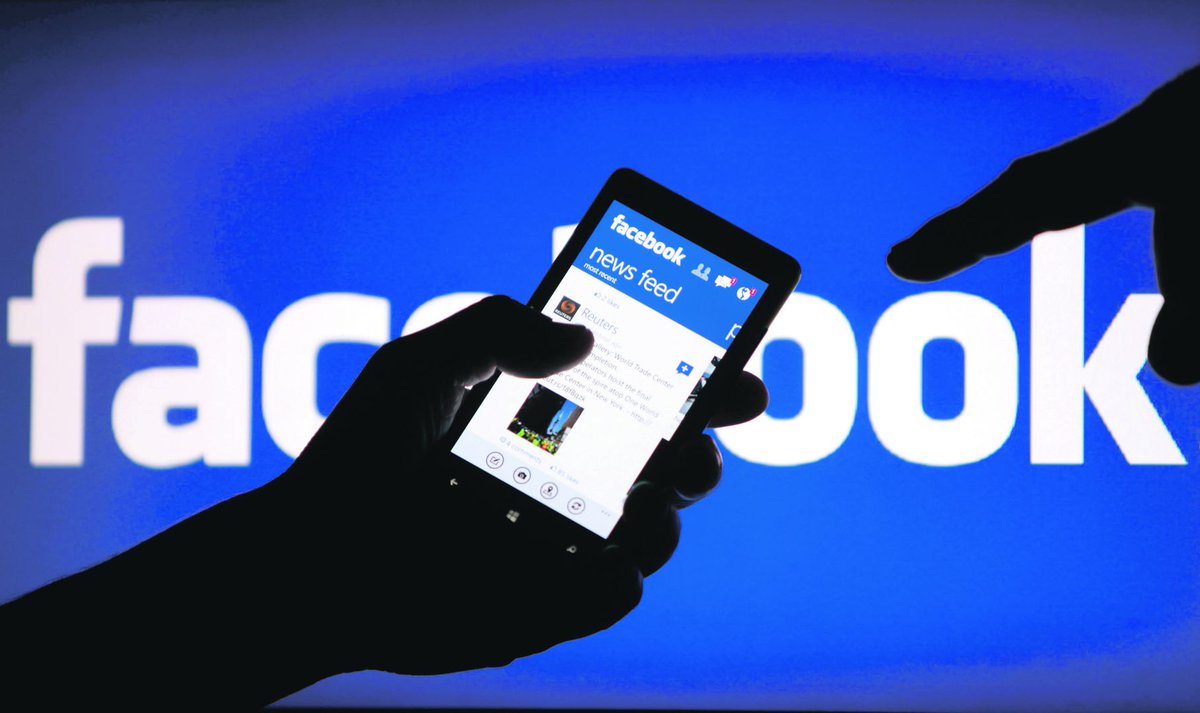 HAMBURG — A group of 15 to 20 people damaged the Germany headquarters of US social media giant Facebook and daubed the message “Facebook Dislike” on its walls, police said today (Dec 13).

The black-clad, masked vandals hurled rocks, paint and smoke bombs at the building, damaging its walls, front door and windows, in the northern port city of Hamburg around 2000 GMT today.

Police and the domestic security service were searching for the attackers, who fled on foot. The motive for the attack and the financial cost of the property damage were not yet known. 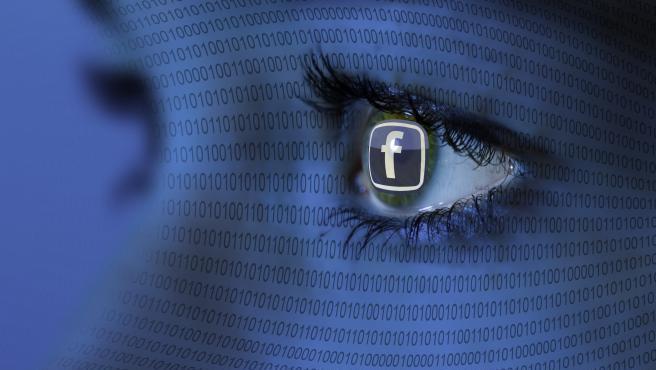 SAN FRANCISCO: Facebook on Monday followed in Google’s footsteps and began warning users when it appears they are targeted by state-sponsored cyber attacks.

“Starting today, we will notify you if we believe your account has been targeted or compromised by an attacker suspected of working on behalf of a nation-state,” Facebook chief security officer Alex Stamos said in a blog post.

“We do this because these types of attacks tend to be more advanced and dangerous than others, and we strongly encourage affected people to take the actions necessary to secure all of their online accounts.”

Recommended security moves included rebuilding systems or even replacing computers believed to have been infected with what would likely be sophisticated malicious code.

Alerts from Facebook will include boxed messages urging targeted users to immediately secure accounts and will provide a link to turning on a feature that requires a code sent to members’ mobile phones along with a password to log in.

Google security was ramped up in mid-2012 to include notifying users when it seemed they were in the cross-hairs of state-sponsored hackers.

Would you use emojis to express your feelings on #Facebook? 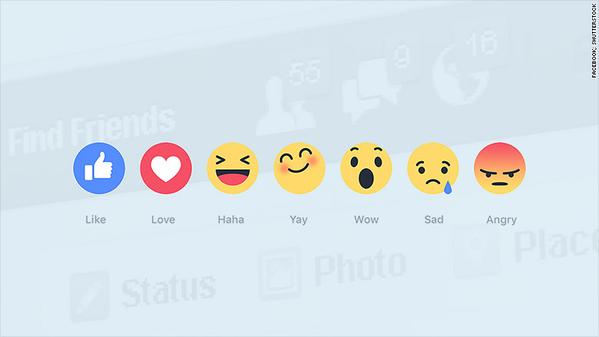 On Friday, Facebook users in Ireland and Spain will be able to express a fuller range of emotions online with a set of new expressions and animated emojis.

There’s a throbbing heart for “Love,” a fuming face for “Angry,” a teary-eyed “Sad,” a laughing “Haha,” a surprised “Wow” and an eyes-closed smile for “Yay.”

“We studied which comments and reactions are most commonly and universally expressed across Facebook, then worked to design an experience around them that was elegant and fun,” Facebook product manager Chris Cox said in an announcement Thursday.

“As you can see, it’s not a ‘dislike’ button, though we hope it addresses the spirit of this request more broadly,” he added.

About a month ago, Facebook CEO Mark Zuckerberg announced that the company was close to testing a “Dislike” button, but didn’t specify what format it would take.

Zuckerberg said that although a “Dislike” button has been one of the most asked-for features, he didn’t want to turn Facebook into a place where people voted posts up or down.

The bigger goal, he said, was to give users ways to express empathy on Facebook.

Facebook will begin testing a new feature allowing users in Ireland and Spain to express a range of emotions on posts starting on Friday (Oct 9) – but there will be no “dislike” button, the social network said.

DUBLIN: Facebook will begin testing a new feature allowing users in Ireland and Spain to express a range of emotions on posts starting on Friday (Oct 9) – but there will be no “dislike” button, the social network said.

Facebook described the new “Reactions” options as an extension of the “like” button, to give people more ways to easily signal how they feel.

Users have for years pressed the world’s leading online social network for a “dislike” button to complement the existing thumbs up one, which allows users to express they “like” a post.

“Not every moment is a good moment, and sometimes you just want a way to express empathy,” posted Facebook co-founder and chief executive Mark Zuckerberg. “These are important moments where you need the power to share more than ever, and a ‘Like’ might not be the best way to express yourself.”

During the trial, users in Ireland and Spain will be able to select six emotions, as well as the like button, as they consider how they feel about posts. The options for the trial are: “love,” “yay,” “wow,” “haha,” “sad,” and “angry,” and are similar to emojis used in text messaging. Each expression comes with a correspondingly themed emoji.

The Guardian ‏@guardian 44s44 seconds ago

Britain Uncovered survey results: the attitudes and beliefs of Britons in 2015 http://trib.al/NLDA061

Facebook is the dominant social site, with 73% of Britons using it in the past six months. Some have suggested that the very ubiquity of Facebook is off-putting to younger users, keen to avoid sites also used by their parents. This may be true, but it hasn’t caused outright rejection; 94% of 18-24s have used Facebook in the past six months. While Britons across the age spectrum use Facebook, some sites are used almost exclusively by younger people. Examples are Snapchat (used by 58% of 18-24s) and Instagram (47%). Generally there is little difference between genders and their use of social sites. However, women (79%) are significantly more likely than men (65%) to use Facebook. Other heavily used sites among Britons are YouTube (45%) and Twitter (33%). Twitter is particularly popular among those at the top end of the social spectrum; 51% of those in social grade A are users.

Frequency of usage suggests a nation in love with social media but there are suggestions the relationship is not entirely harmonious; 54% of us agree that social media has put pressure on society to be constantly doing things or going places. We may expect to see this pressure felt most keenly by the young, but rates of agreement are flat across the age spectrum.

Opinium Research conducted 1,019 interviews earlier this year. The results of the poll have been weighted to reflect the demographic profile of all Britons aged 18+.

If given permission by the person who has passed the legacy contact can download an archive of photos, posts and profile information. The designated contact won’t be able to log in or see messages from the person who passed away.

Summary:Facebook’s new feature that enables legacy contacts is interesting because it sets a standard to be followed and cements best practices when you pass away and your social accounts don’t.

This January 30, 2014 file photo taken in Washington,DC, shows the splash page for the social media internet site Facebook. Facebook wanted to delight its users by compiling each member’s “year in review” — but inadvertently revived painful memories for some who suffered tragic events in 2014.
…
Geoffrey A. Fowler
The Wall Street Journal
Thursday, Feb 12, 2015
…

In a change of heart, the world’s most popular social network will begin allowing its members to designate someone-what they call a “legacy contact”-to manage parts of their accounts posthumously. Members can also choose to have their presence deleted entirely.

Facebook and other Internet services walk a difficult tightrope between respecting the privacy of the deceased and the demands of grieving friends and family. Previously, Facebook automatically froze the accounts of members it learned had died, angering some heirs who wanted to edit the deceased’s online presence. It will roll out the new options to members in the US on Thursday, with others to follow later.

Asking us to make plans for a digital afterlife may sound morbid, but it can bring clarity to an issue that’s both legally and emotionally challenging. In 2013, Google became the first major Internet company to allow users to select digital heirs for its Gmail, cloud storage and other services, dubbed “inactive account managers.”

What’s the point of maintaining a social network after death? Facebook legacy contacts will be able to manage accounts in a way that can turn the deceased person’s Facebook page into a kind of digital gravestone. Legacy contacts can write a post to display at the top of their friend’s memorialized profile page, change the friend’s profile picture, and even respond to new friend requests on behalf of the deceased. 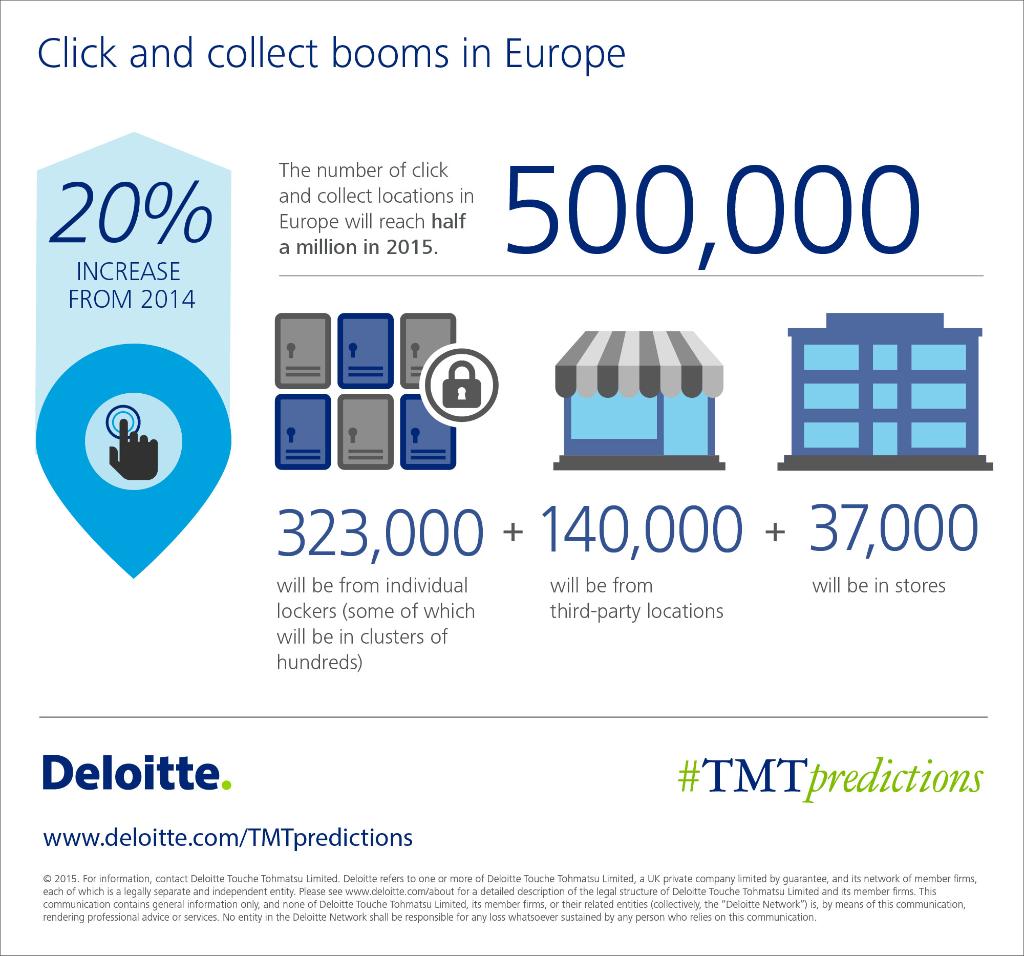