AirAsia after QZ8501: What lies ahead?

WILL AIRASIA BE PLAGUED BY THE SAME STREAK OF BAD LUCK THAT STRUCK MAS?

OR WILL GOOD MANAGEMENT AND STRICT QUALITY CONTROL BRING THEM THROUGH THIS BAD SPELL?

“The past few weeks have been the most difficult weeks of my life” – @tonyfernandes #QZ8501 http://cna.asia/qz8501blackbox 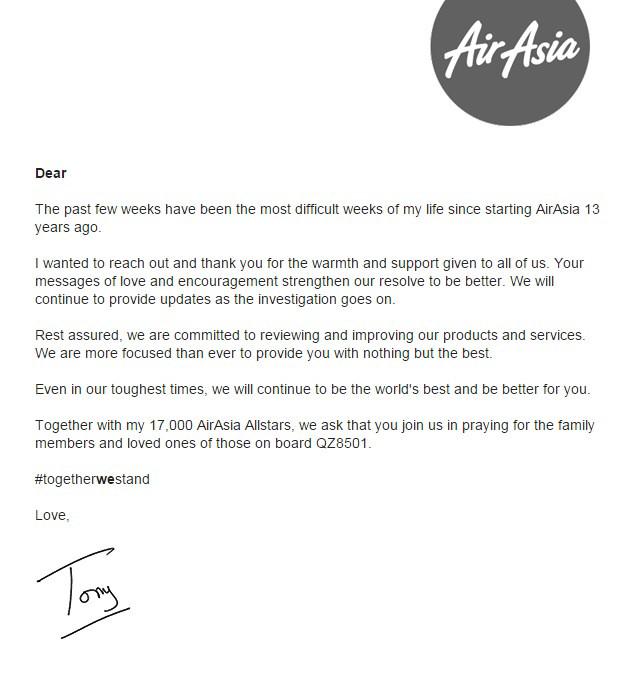 @tonyfernandes You got our fully support Sir. Warm regards from AllStars family.. #TogetherWeStand

@tonyfernandes flew AirAsia 6 times in last month. Awesome. Will be back again and again

AirAsia Indonesia has also confirmed that its Surabaya-Singapore route has been suspended at the government’s request. The government is investigating and evaluating, and AirAsia has said it will fully cooperate, reports Channel NewAsia’s Sumisha Naidu. 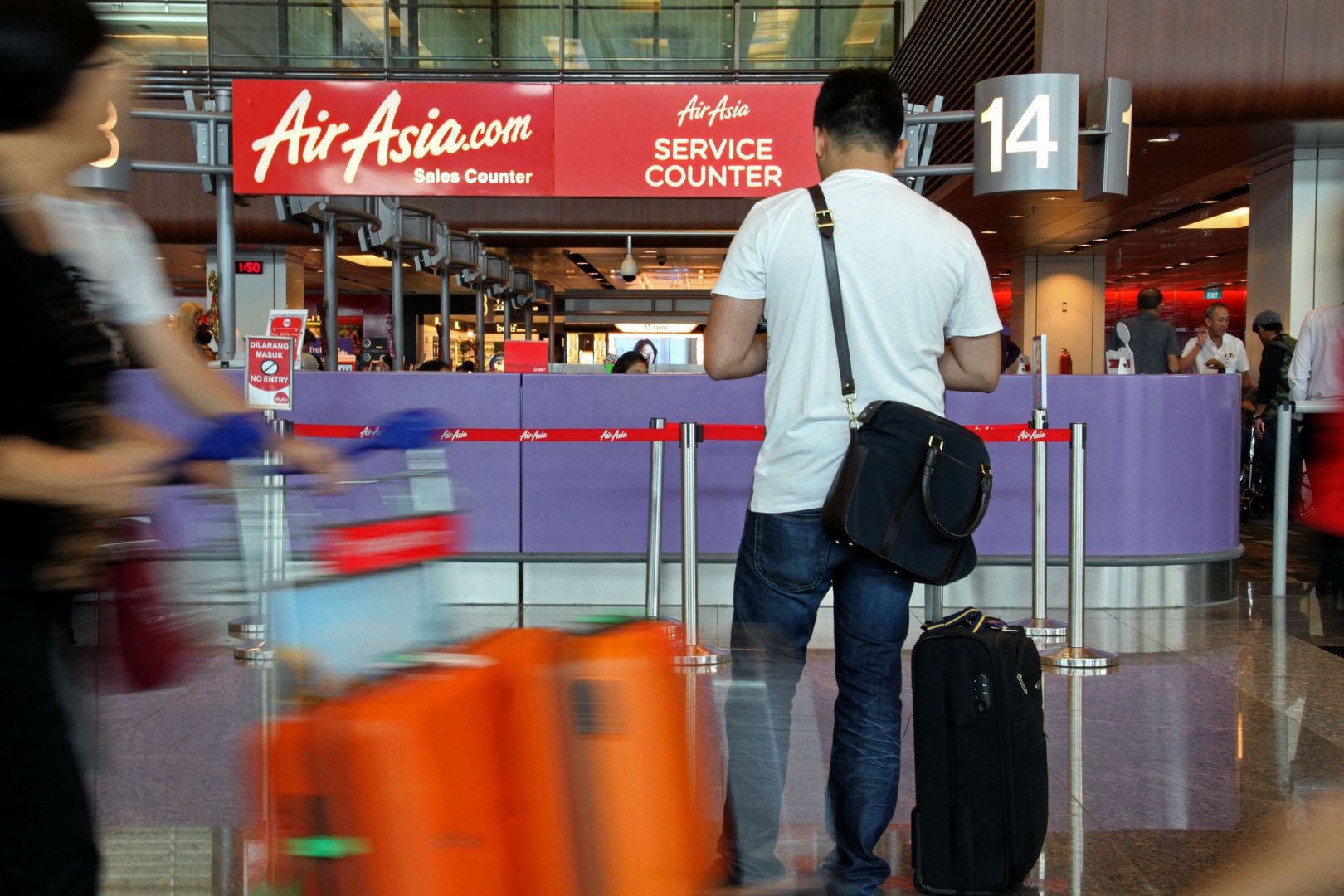 AirAsia’s Surabaya-Singapore service was given approval at Singapore’s end to operate a daily flight for the Northern Winter Season from Oct 26, 2014 to Mar 28, 2015, said the Civil Aviation Authority of Singapore and the Changi Airport Group in a joint statement

SINGAPORE — The Civil Aviation Authority of Singapore (CAAS) and the Changi Airport Group (CAG) said today (Jan 3) that Indonesia AirAsia’s Surabaya-Singapore service had been given approval at Singapore’s end.

Replying to media queries, they said in a joint statement that before “an airline can launch a service between two points, it needs to obtain approval of its flight schedules from the respective civil aviation authorities at each end of its flight routing separately.
…

It said that on Singapore’s end, Indonesia AirAsia had applied to operate a daily flight between Surabaya and Singapore for the Northern Winter Season from Oct 26, 2014 to Mar 28, 2015, arriving at Changi Airport at 8.30am (Singapore time) and departing for Surabaya at 2.10pm (Singapore time).

“These daily flights were approved as there were available air traffic rights under the bilateral ASA and the slots at Changi Airport were available,” the statement said.

It added that Indonesia AirAsia was operating the flight four times a week on Mondays, Wednesdays, Fridays and Sundays, adding that airlines may adjust their flight frequencies in the course of a season in response to market demand or operational requirements. CHANNEL NEWSASIA

#AirAsia #QZ8501: CAAS says approval for Surabaya-Singapore flight was based on agreement between countries http://str.sg/ZB7

SINGAPORE – The Civil Aviation Authority of Singapore (CAAS) said in response to media queries that approval had been given for the Surabaya-Singapore sector based on the air rights that were available under the air services deal between both countries and available landing slots at Changi Airport.

JAKARTA – Indonesia’s transport ministry will investigate all Indonesia AirAsia flight schedules from Monday, a government official told Reuters on Saturday, as part of a government probe into the passenger jet that crashed.

“We are going to investigate all AirAsia flight schedules,”Djoko Muratmodjo, acting general director for air navigation in the transport ministry said.

“Hopefully we can start on next Monday. We won’t focus on licences, just schedules.” “It might be possible to revoke AirAsia’s license in Indonesia,” Muratmodjo added.
…

Indonesia AirAsia CEO Sunu Widyatmoko told reporters the company would cooperate with the government investigation, but declined to elaborate.

AirAsia was allowed only to fly Surabaya-Singapore-Surabaya route on Monday, Tuesday, Thursday and Saturday, but in practice the airline flies that route on Sunday. 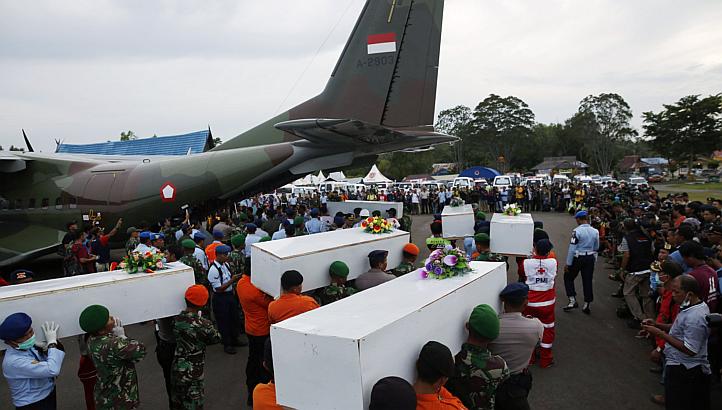 AirAsia’s Surabaya-Singapore and Singapore-Surabaya routes were suspended by Indonesia’s transport ministry due to a breach of contract by the airline.

In a press statement issued on Friday, the transport ministry said AirAsia, based on an Oct 24, 2014 contract, was allowed only to fly Surabaya-Singapore-Surabaya route on Monday, Tuesday, Thursday and Saturday, but in practice the airline flies that route on Sunday.

“The suspension starts on Jan 2 and will remain, pending the result of our evaluation and investigation,” said the statement, signed by the ministry’s spokesman, Mr J. A. Barata.

“AirAsia has never filed for a request to revise its schedule. It is a breach of agreement,” the statement added.

The pilot was a senior captain who had worked for the airline for nine years and had a clean track record.

A transport ministry official confirmed that an AirAsia pilot had tested positive for morphine on Thursday in Bali.

“The test involved 42 airline crew members from which 41 tested negative and one positive,” transport ministry official  Muzaffar Ismail told AFP, adding that the AirAsia pilot would undergo another test Friday.

SURABAYA: AirAsia Indonesia suspended a pilot after he failed a random drugs test, days after 162 people were killed when one of the airline’s planes crashed into the sea off the island of Borneo.

“I would like to clarify that one of our pilots in a random preliminary drug test was found to be positive,” airline president director Sunu Widyatmoko said, responding to media reports that the pilot tested positive for morphine after flying from Jakarta to Bali.

“As a consequence, the pilot cannot fly pending further investigation,” he said, stressing it was an initial result and more detailed tests would be carried out.

“The preliminary result from our interview with the pilot was that he had just come out of the hospital,” he said.

“He is still consuming Actifed. In that drug test, the cough and flu medication could create a false alarm,” he said.

AirAsia jets in fresh incidents in Thailand and Philippines

The incidents come as search teams spotted wreckage and bodies in the sea presumed to be from an AirAsia jet that vanished.

BANGKOK: An AirAsia flight bound for northeast Thailand turned back to the capital Bangkok shortly after takeoff Tuesday when pilots detected an “irregularity” in the storage compartment, airline officials said.

Later on Tuesday, another AirAsia jet — this time in the Philippines — skidded off the runway on arrival at a popular resort island, causing no injuries but shutting the small airport, the airline and police confirmed.
…

It was allowed to resume service after engineers ruled out any technical problems.

“After departure from Don Mueang, the pilots detected a minor irregularity in the storage area, thus in the interest of safety the flight returned to land at Don Mueang Airport for a detailed inspection,” said Thai AirAsia in a statement.

“Engineers did not discover any issues compromising the safety of flight FD3254,” it said.

No passengers cancelled their flights and the plane arrived at its destination an hour behind schedule, officials said.

An AirAsia spokesman at Don Mueang Airport said the pilots turned back after “hearing some noise in the luggage compartment”. He could not confirm the reason for the noise. 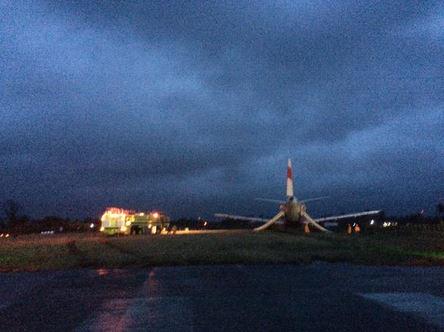 Several posts on social media showed emergency slides being deployed from the Airbus A320 plane, which appeared to have come to a halt on a grassy field.

The Filippino journalist posted several photos on Twitter and also said that no one seemed to be hurt. Flight Z2272, which originated from Manila, was operated by AirAsia Zest, an affiliate of Philippines AirAsia. 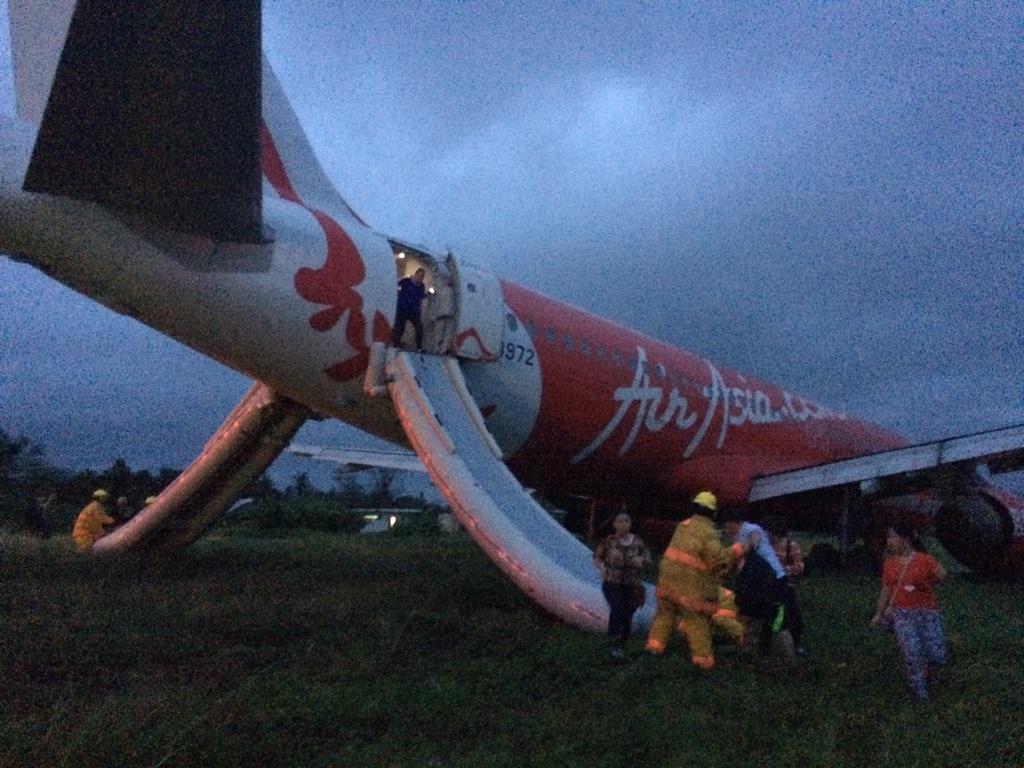 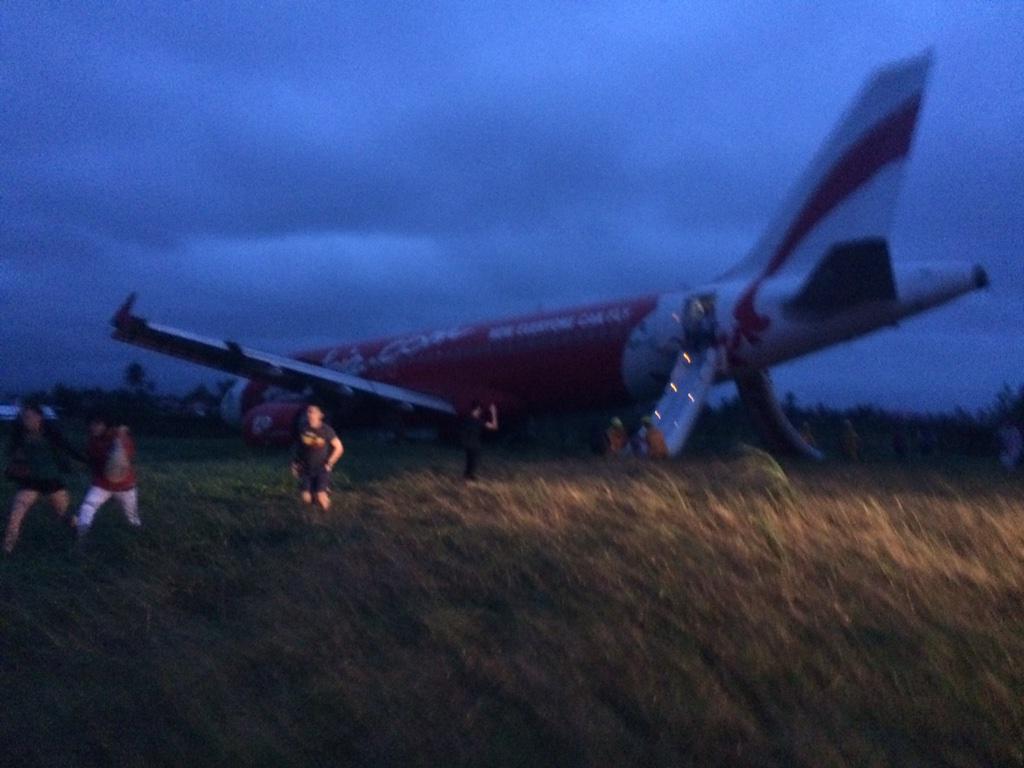 AirAsia jet turns back in Thailand due to ‘irregularity’

BANGKOK: An AirAsia flight bound for northeast Thailand turned back to the capital Bangkok shortly after takeoff when pilots detected an “irregularity” in the storage compartment, airline officials said.

The news comes as search teams detected debris in the sea from an Indonesia AirAsia jet that vanished in a storm Sunday en route from Surabaya in Indonesia to Singapore with 162 people aboard.

It was allowed to resume service after engineers ruled out any technical problems.

“After departure from Don Mueang, the pilots detected a minor irregularity in the storage area, thus in the interest of safety the flight returned to land at Don Mueang Airport for a detailed inspection,” said Thai AirAsia in a statement.

“Engineers did not discover any issues compromising the safety of flight FD3254,” it said.

AirAsia flight from #Penang to #Langkawi turns back due to ‘technical issues’ http://bit.ly/1COq9GR 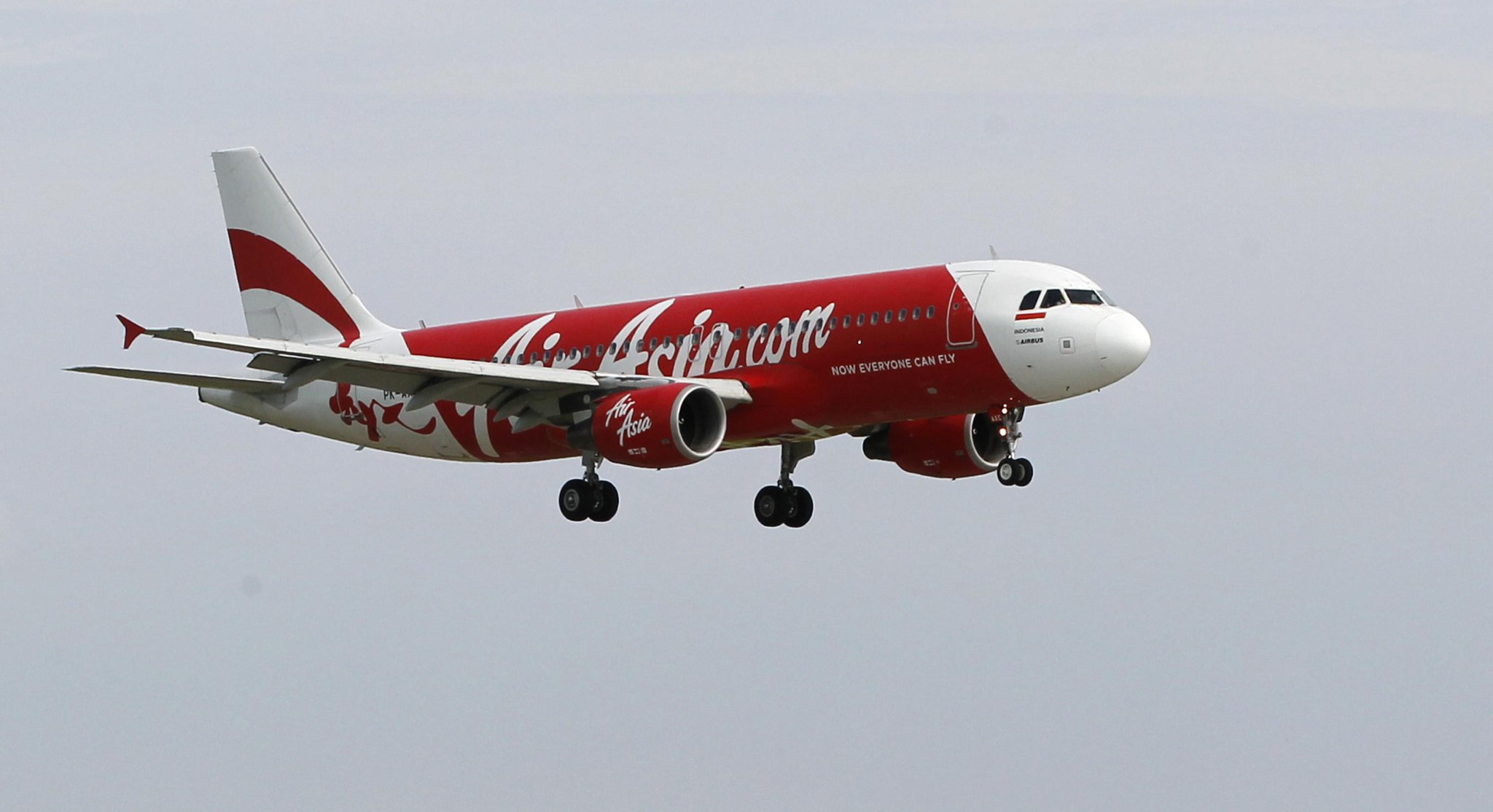 A separate Air Asia flight had to turn back after experiencing technical difficulties.

Air Asia flight AK6242 had to return to Penang International Airport at 4.30pm on Sunday (Dec 28) just 10 minutes after taking off reported the New Straits Times.

It was en route to Langkawi.

A passenger on the flight, Subash Elangovan, told New Straits Times that the pilot announced that the flight had experienced technical difficulties and that it was going to turn back to Penang International airport.

While it is unknown what was the technical difficulties, the flight then took off again at 6pm and landed at Langkawi International Airport at 6.47 pm

2 Responses to AirAsia after QZ8501: What lies ahead?