THIS WAS HOW THEY GOT THE WOMAN’S MONEY. 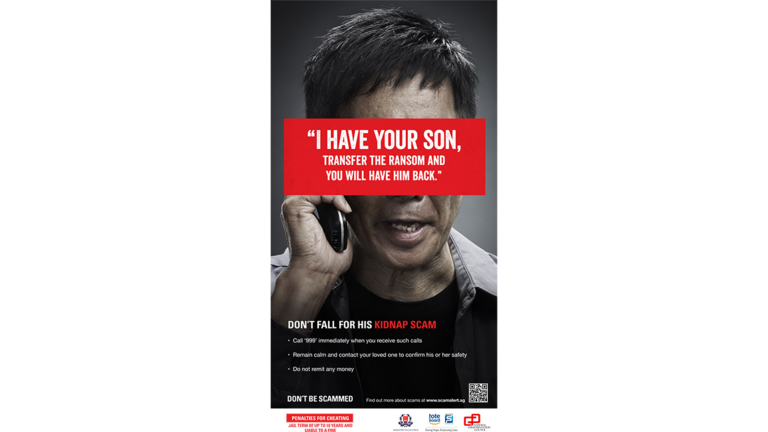 The findings were revealed at the launch of their nationwide public education campaign at Temasek Polytechnic. To address the issue, seven new publicity visuals, and an informative website that allows people to share their experiences with scams anonymously, were unveiled.

Winners of the Scam Alert! photo contest, which was held in conjunction with the campaign, also received their prizes from the guest-of-honour, Second Minister for Home Affairs S Iswaran, on Friday.

The winning entry came from Ms Sum Pei Yi, whose 83-year-old grandfather had received an overseas call last year to say that his son, who was in China at that time, was injured. The caller then asked for money to pay for his hospitalisation fees.

Sensing that something was amiss, Ms Sum’s grandfather quickly hung up and called her. Ms Sum in turn called her father, who confirmed that he was doing well.

“It’s natural for parents to panic and break down when they hear that their child has been kidnapped. I hope to remind all parents to stay calm,” she said.

DON’T LET THIS HAPPEN TO YOU!

Be extremely wary especially on a Friday! Why? That is so that you won’t have enough time to alert the banks, which are closed till Monday.

POH: A 55-year-old mother hopes to recover the ransom she paid for the release of her 32-year-old son in September, after learning that the kidnapping case was a hoax.

On Sept 19, Yau Sau Har from Pekan Razaki received a call from a Mr Wong who demanded RM60,000 for the release of her son Lai Yin Hoe, 32.

“I could hear my son’s voice in the background asking to be released,” she said at a press conference arranged by the Perak Barisan Nasional Public Services and Complaints bureau here today.

Yau told the man she had only had RM35,159 and he instructed her to deposit the money into a bank account under the name of a Mr Koh.

Her son, however was not kidnapped but at work. The “kidnappers” had kept his phone busy to prevent his mother from contacting him.

She realised she was duped when she finally managed to reach Lai, a crane operator after depositing the money.

I immediately alerted the bank which froze the account of Mr Koh,” she said.

Yau and Lai each lodged a police report.

The mother learnt that RM10,000 had already been withdrawn.