The USM Notice is clearly a copy of the two above.

This offers a variation on the theme…

One night, when I was about 13-years-old, my dad caught me doing unspeakable things to myself and said, “You know, if you keep that up you’re going to go blind.” And I said, “Dad, I’m over here.”

I’ve been telling that joke since I was 19-years-old, working in a bar, trying to get tips. It landed every time, probably because most people can identify with the premise. Not the idea of getting caught, but that it’s something that everyone does, no one admits to, and almost nobody talks about. And if they do, it’s in jokes, horror, or very quietly with your best friend with whom you’ve entered into some sort of mutually agreeable suicide pact. After all, we’ve been told that masturbation will: make you go blind, stunt your growth, make you go insane, give you hairy palms, give you acne, and according to some, will send you straight to Hell, regardless of how many charities you donate to or lepers you cure.

As Jenne Davis of clitical.com puts it:

It will be part of the ‘Critical and Literary Theory’ element of the course, which includes a study of ‘pleasure, self-scrutiny, and auto-eroticism’.

I don’t think this is a real thing. But we could make it that way. 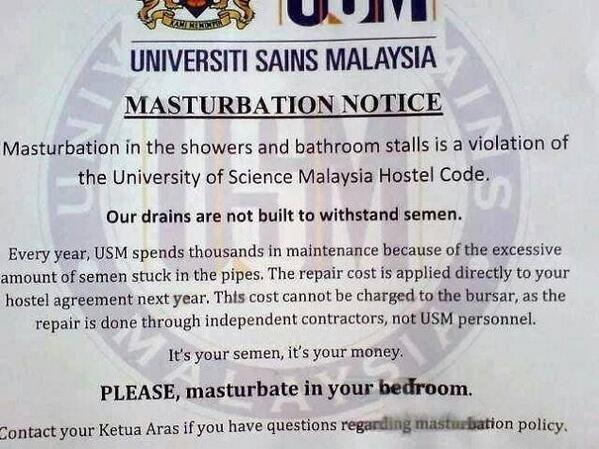 UiTM was in the news around the time of the Teluk Intan byelection.

Enemy of the State: Says who? Says (UiTM) Alumni Association

Now it’s back in the news again over something EMBARRASSING!

A representative from the residential college’s Student and Alumni Affairs Department told The Malay Mail Online that the sticker was a mere “hoax”, likely started by the students.

“We have never produced anything to that effect,” said the official who wished to remain anonymous.

She added that the college became aware of the stickers when an official in charge of student registration discovered them some time ago.

“We have reported it to the auxiliary police,” she said.

The white warning sticker bearing the name of Kolej Perindu has been circulated online, mostly in social media.