Posted on September 25, 2018 by weehingthong

Abdul Azeez, 52, made the plea after the charges were read out separately before judge Azura Alwi.

On the first charge, Abdul Azeez was charged with corruptly receiving for himself RM1.2 million through his CIMB Bank Berhad account from Mohammad Redzuan Mohanan Abdullah, who is a director of Menuju Asas Sdn Bhd, as gratification for helping the company to secure projects from the government through direct negotiation and limited tender, all worth RM197,805,750.18.

On the second and third charge, Abdul Azeez was charged with corruptly receiving for himself RM4 million from the same person as gratification to Menuju Asas Sdn Bhd to secure a road project, Pantai Baru Coastal Expressway Project: Upgrading Works of Federal Road FT005 (Teluk Intan to Kampung Lekir, Perak), worth RM644,480,000, through limited tender from the Malaysian Works Ministry.

He was charged with committing the offence at ​​​​​​​Affin Bank Berhad, J-03-G, Block J, Setiawalk, Persia

The MACC has confirmed that it arrested Baling MP Abdul Azeez Abdul Rahim, who was the former Tabung Haji chairperson.

“The MACC, after receiving consent from the Attorney-General’s Chambers, today arrested Azeez and his brother Abdul Larif Abdul Rahim in relation to an investigation into corruption and money laundering,” it said in a statement this evening.

It added that the duo was arrested at 4.30pm after they presented themselves at the commission’s headquarters in Putrajaya for questioning.

“Both will be charged at the Kuala Lumpur sessions court at 9am on Jan 16 under the MACC Act 2009 and Anti-Money Laundering, Anti-Terrorism Financing and Proceeds of Unlawful Activities Act 2001,” it said.

“It is said that he received corrupt money from many contractors who wanted to secure projects from the government,” the highly-placed sources said.

Azeez was seen at the MACC headquarters in Putrajaya at 2.55pm today where he was arrested.

Previously, Azeez and his brother were detained by the MACC in September and remanded for four days.

Azeez’s son was also arrested for a day in October.

All three are being investigated under Section 16(a) of the MACC Act 2009 to facilitate investigations pertaining to soliciting or receiving gratification.

According to a source, the 24-year-old suspect was arrested at the MACC headquarters in Putrajaya about noon today, after being summoned for questioning.

The source claimed that the suspect is believed to be a proxy for his father.

“He was like a ‘runner’ in the transferring of bribe money involving contractors,” the source added.

It is understood that MACC will be filing a remand application for Azeez’s son at the magistrate’s court in Putrajaya tomorrow morning. 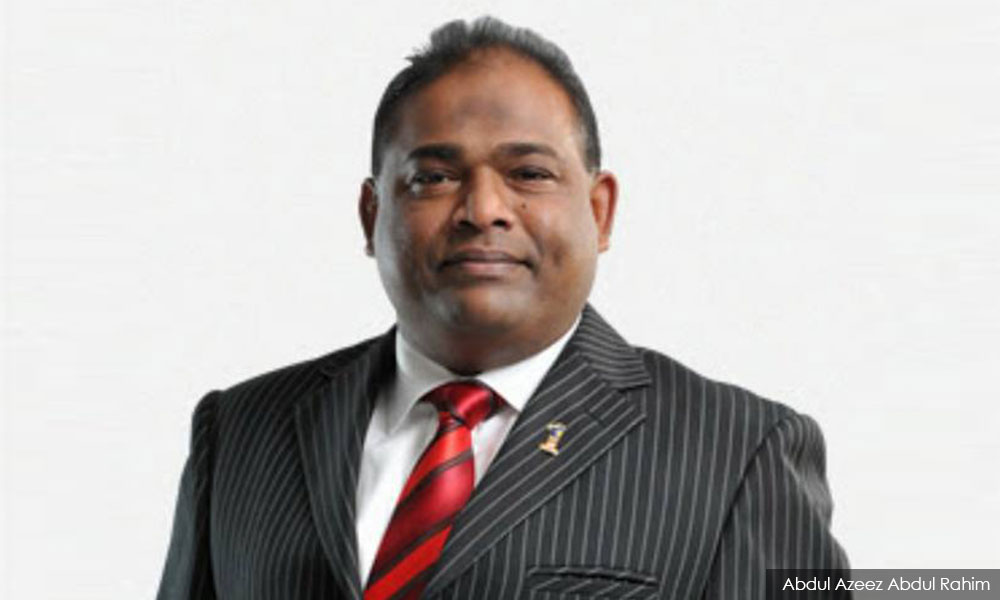 Previous reports said they had been detained to assist in a probe into the appointment of contractors in Tabung Haji projects.

PUTRAJAYA: Former Tabung Haji chairman Abdul Azeez Abdul Rahman has been remanded for four days from today to Saturday to assist in investigations into several cases of bribery.

“The magistrate (Shah Wira Abdul Halim) granted the remand after submissions were made,” he told reporters outside the court complex here.

Azeez and his brother, who is the general manager of a company, were arrested by the Malaysian Anti-Corruption Commission (MACC) yesterday.

Dressed in orange, UMNO supreme council member and the former head of Tabung Haji, Azeez Abdul Rahim, arrives in court for his remand hearing along with two others. They’re being investigated for corruption. pic.twitter.com/18gkskSTxY

The case is being investigated under Section 16 of the MACC Act 2009, which deals with the solicitation of bribes and offering of gratification to another party in a transaction. https://t.co/p9MJU5QlzC

PETALING JAYA: A source close to Baling MP Azeez Abd Rahim, who was also the former Tabung Haji chairman, has confirmed that he and his brother have been detained by the Malaysian Anti-Corruption Commission (MACC).

He said the duo were expected to be brought to court tomorrow for remand.

The source said he was unaware of the charges being levelled at Azeez and his brother.

He told FMT that MACC was expected to throw more light on the case tomorrow.

MACC has arrested former Tabung Haji chairperson Azeez Abdul Rahim, who is also the Umno MP for Baling, and one of his brothers.

According to a MACC source, the two were detained this morning.

However, the reason for their arrest remains unclear while MACC is expected to issue a statement on this soon.

Bernama later reported that the raids were to facilitate investigations into the appointment of contractors involving Tabung Haji projects.

54oppppppppppppppppppThe case is being investigated under Section 16 of the MACC Act 2009 pertaining to soliciting/receiving gratification.

Like Loading...
This entry was posted in Uncategorized and tagged MACC detains Baling MP Azeez and his brother. Bookmark the permalink.