Great men can put aside past differences and errors and move forward. We see this happening with both Dr Mahathir and Lim Kit Siang.

They transcend the past. It is the present that counts.

Together, they may yet help build us a future free of corruption. 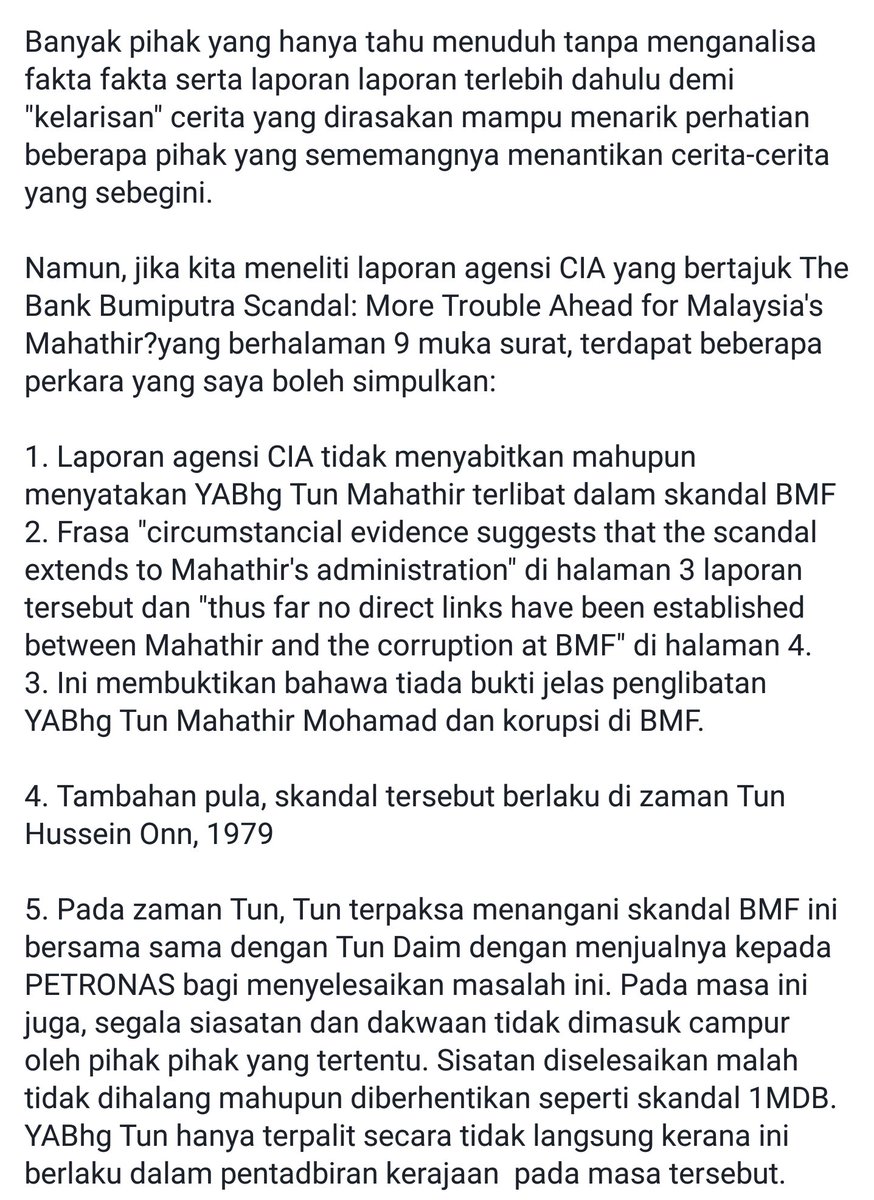 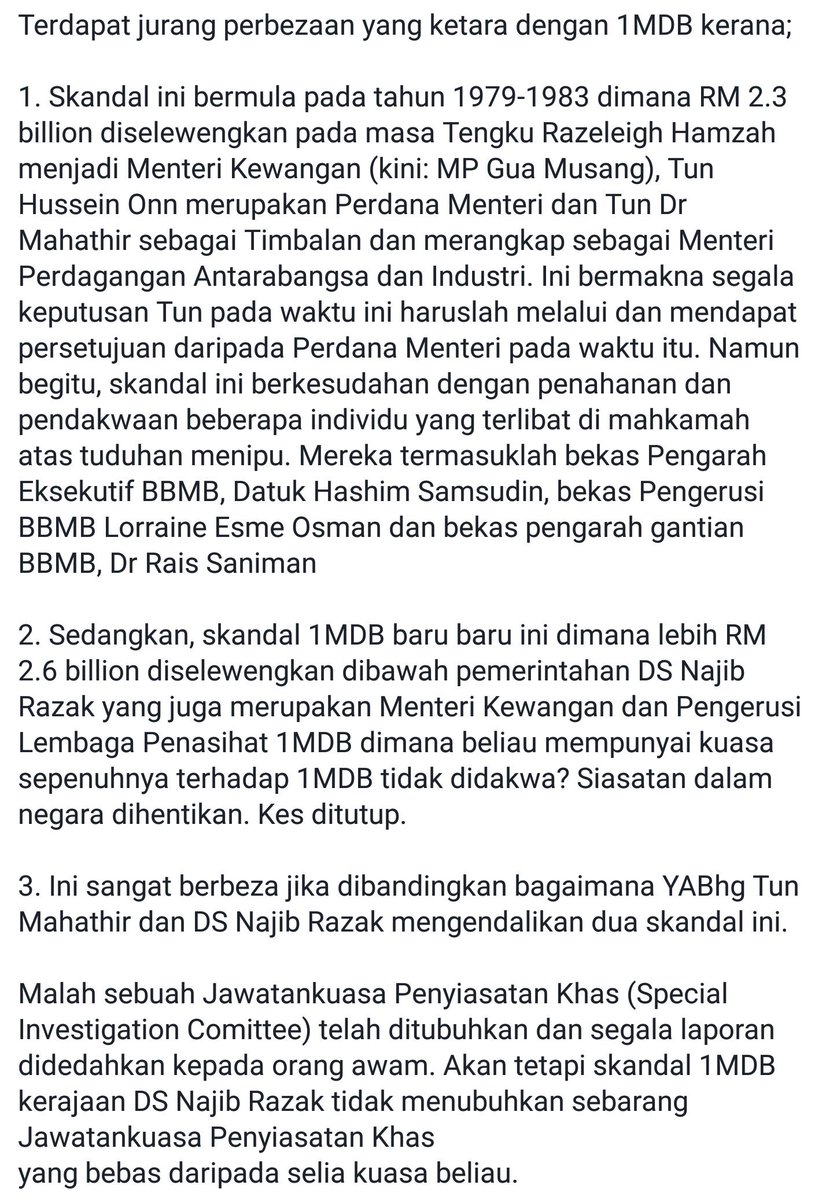 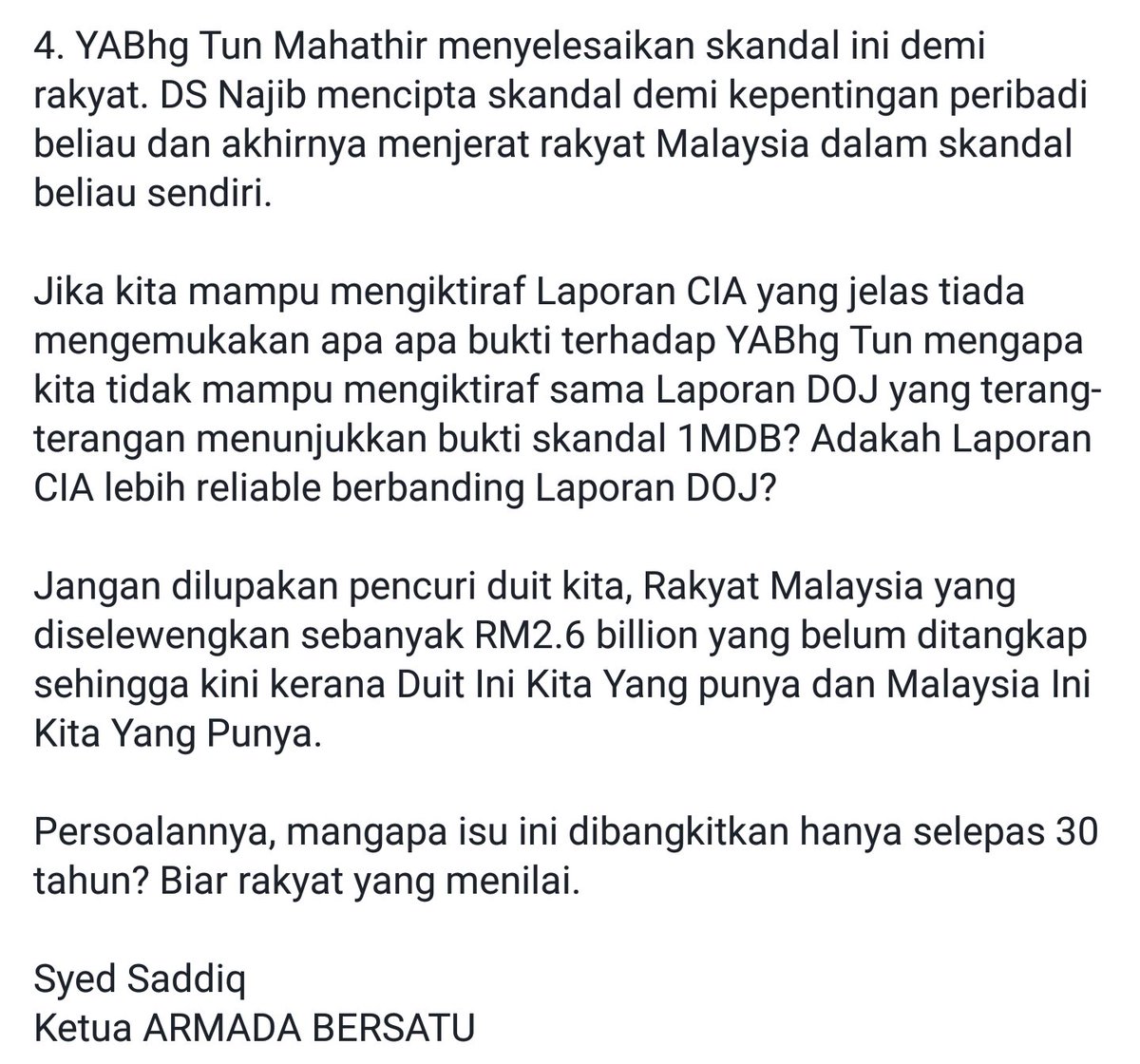 Former premier Dr Mahathir Mohamad has outlined the differences between the BMF scandal during his tenure, and the current 1MDB imbroglio.

In a blog post, he said the BMF issue did not involve allegations of direct impropriety by the government in power.

“In contrast, the 1MDB issue is directly linked to impropriety by the present government.

Mahathir said he pointed out the clear distinctions between the two in order to put the point across that he did not have a 1MDB-like scandal when he was prime minister.

Najib, on the other hand, has denied abusing public funds for personal gain and blamed such allegations on Mahathir and those whom he accused of conspiring to topple him from power for their respective political agendas.

On the BMF issue, Mahathir said that the Central Intelligence Agency (CIA) report was by a US agency, and was not a specific report or finding by the US on the BMF issue.

In contrast, he noted that on the 1MDB issue, the US Department of Justice (DOJ) released the necessary report as contained in the cause papers filed in a court of law in California, with specific findings linking the 1MDB issue to Malaysian Official 1 (MO1).

Minister in the Prime Minister’s Department Abdul Rahman Dahlan had confirmed that MO1 was Najib, but argued that since he was not named, therefore Najib was not being investigated.

PETALING JAYA: The scandal involving Bank Bumiputra and its subsidiary Bumiputra Malaysia Finance (BMF) in the 1980s damaged the reputation of the Government under former prime minister Tun Dr Mahathir Mohamad (pic), according to documents declassified last week by the US Central Intelligence Agency (CIA).

The documents claimed that although “no direct links have been established between Mahathir and the corruption at BMF”, the “hint of association” had damaged the administration of Dr Mahathir, who was elected in 1981 under a “clean government” mandate.

The CIA claimed that the most damaging aspect of the scandal was the “alleged connection of (now defunct Carrian group and former chief executive officer) George Tan to Umno officials”.

Equally damaging was the Government’s half-hearted response when news of the scandal broke, said the documents contained in a March 5, 1985 report entitled “The Bank Bumiputra Scandal: More Trouble Ahead for Malaysia’s Mahathir?”.

“The secrecy of the Government’s investigation was defended as necessary under Malaysia’s Banking Secrecy Laws and a year’s delay after the problems surfaced in effecting any management changes at BMF made the government a suspect,” it added.
.

Although he has repeatedly denied any involvement, the CIA report revealed that based on circumstantial evidence, the scandal had extended into Dr Mahathir’s administration.

“As a government-owned bank, Bank Bumi is closely monitored by both the Finance Ministry and the central bank.

“No important decisions are made without their agreement or knowledge,” it said. 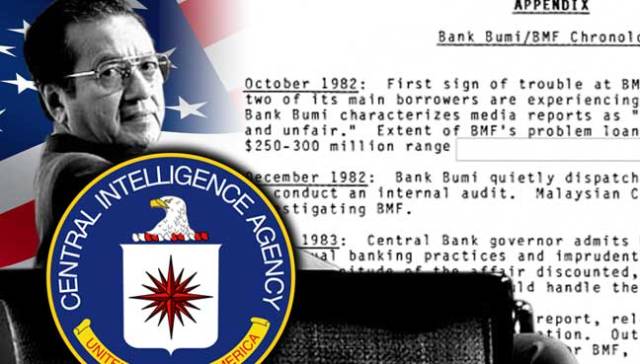 KUALA LUMPUR: Documents recently declassified by US intelligence on a major banking scandal which rocked Malaysia in the 1980s showed the administration of then prime minister Dr Mahathir Mohamad had tried to scuttle and delay investigations while looking for a way to bail out the government-owned Bank Bumiputera, a news portal reports.

The Asian Correspondent said the documents were among 13 million released last week by the Central Intelligence Agency (CIA), which among others questioned the Mahathir administration’s response in dealing with the BMF scandal resulting in losses of some US$1 billion.

“Under political pressure, Mahathir compromises and established a three-member Committee of Inquiry. This closed-door commission, however, has no legal power to summon witnesses, subpoena documentary evidence from outside Bank Bumi, or require testimony under oath,” the CIA report said.

The report added that the government justified the secrecy surrounding its investigation using the Banking Secrecy Laws, adding that “a year’s delay after the problems surfaced in effecting any management changes at BMF have made the government suspect”.

It said the Malaysian government could not claim ignorance of the scandal as it involved Bank Bumiputera which had strong ties with the ruling Umno of that time and which was closely monitored by the Finance Ministry.

“No important decisions are made without their agreement or knowledge,” the portal quoted the CIA papers dated March 1985 and titled “The Bank Bumiputra Scandal: More Trouble Ahead for Malaysia’s Mahathir?”.

“It is unlikely that the government was unaware of Bank Bumi’s increase on lending limits for its overseas branches to allow more funds to be channeled to Hong Kong.”

The release of the documents comes at a time when Dr Mahathir has been leading criticism of Prime Minister Najib Razak’s handling of the 1MDB saga.

Dr Mahathir had in May 2015 said the BMF scandal could not be compared to 1MDB.
.

The documents said both Dr Mahathir and Tengku Razaleigh Hamzah, who was trade and industry minister at that time, had close ties with those involved, including Nawawi Mat Awin, the bank’s chairman.

“The most potential damaging aspect of the affair is the connection of Tan to officials of the United Malays National Organisation (Umno), headed by Mahathir and the dominant party on the government coalition,” said the CIA report.

“The secrecy of the government’s investigation — defended as necessary under Malaysia’s Banking Secrecy Laws — and a year’s delay after the problems surfaced in effecting any management changes at BMF have made the government suspect.

“Many businessmen and bankers believe that the government is using the six accused BMF officials as scapegoats in an effort to avoid implicating senior government officials,” it added.

Like Loading...
This entry was posted in Uncategorized and tagged BMF scandal and mahathir today, CIA documents mahathir and the BMF scandal. Bookmark the permalink.