Police urged to investigate member of political party who allegedly insulted Malay rulers: No prize for guessing correctly who he is.

Will he be called up for an ‘interview’?

Mahathir’s treason against the Agong

As we mentioned in yesterday’s article, Kelantanese in general and the Kelantan Palace in particular hate Mahathir and have hated him since the 1980s when he slandered the Monarchy and made them the laughing stock of the entire world. Even the international media was making fun of Malaysia’s monarchy because of Mahathir. In 1990, the Kelantanese, at the behest of the then Sultan of Kelantan, DYMM Sultan Ismail Petra, kicked Mahathir’s party (Umno Baru) out and voted PAS-Semangat 46 in as the new Kelantan State Government.

Umno Baru, which was formed two years earlier, was called ‘Parti Mahathir’ and anything that had any links to Mahathir was not welcome in Kelantan. Mahathir then punished the Kelantanese by cancelling the RM600 million grant that had earlier been approved to upgrade the water supply in the state.

Mahathir and Kit Siang: fortunes tied together and Anwar not part of that deal

This, plus all those issues we mentioned in the previous article (A royal snub: Mahathir courts the Agong’s displeasure), were enough to make Kelantanese and the Kelantan Palace hate Mahathir. After all, he not only declared war on the Sultan, he also had blood on his hands: blood of hundreds of Kelantanese who died of cholera over the last 26 years or so. But that was not yet the main reason why the Agong struck Mahathir off the protocol list and uninvited him from the Coronation. It was due to Mahathir’s treason that the Agong decided that this time Mahathir had gone too far.

Deputy Prime Minister Ahmad Zahid Hamidi says Dr Mahathir Mohamad should just ask Istana Negara officials himself if he is not happy with the cancellation.

PUTRAJAYA: The government played no part in the palace’s decision to cancel Dr Mahathir Mohamad’s invitation to last Tuesday’s oath-taking ceremony for the Yang di-Pertuan Agong.

Deputy Prime Minister Ahmad Zahid Hamidi said he had checked to see where the instruction came from, and found that it was issued by Istana Negara.

“Seven people (from the palace) were involved in the decision-making process,” he told a press conference at the Immigration headquarters here today.

“So don’t blame the prime minister’s office. If you (Mahathir) are unhappy with the decision, then go and meet the palace to seek for an explanation.”

KUALA LUMPUR: A non-governmental organisation wants police to investigate and take action against a member of a political party who allegedly insulted the Institution of the Malay Rulers.

“A video clip uploaded on Youtube clearly shows the member openly making the accusation and implying that the Institution of Malay Rulers cannot make independent decisions,” he told reporters after lodging a police report at the Dang Wangi District Police Headquarters here today.

KUALA LUMPUR: A non-governmental organisation has accused Parti Pribumi Bersatu Malaysia (PPBM) member Zahid Mat Arip of insulting the Malay royal institution.
.
Pertubuhan Nadi Rakyat Malaysia president Mohamad Rafi Awg Kechik said this was in relation to Zahid’s remark on the retraction of an invitation letter to former prime minister Tun Dr Mahathir Mohamad and his wife for the oath-taking ceremony of the new Yang di-Pertuan Agong.
.
Mohamad Rafi said Zahid had implied that the royal institution was not free to make its own decision on the matter.
.
He said, Zahid in a video uploaded on YouTube had allegedly said that an Umno leader had ordered the Keeper of the Rulers’ Seal, Datuk Seri Syed Danial Syed Ahmad to cancel the invitation to Dr Mahathir from attending the installation of the 15th Yang di-Pertuan Agong ceremony at Istana Negara.
.
“The accusation is clearly an insult the Malay royal institution. Zahid has indirectly implied that the Istana Negara received orders from political leaders.” said Rafi, after lodging a police report against Zahid at the Dang Wangi police headquarters today.Read More : http://www.nst.com.my/news/2016/12/196796/ngo-lodges-police-report-against-ppbm-man-over-remark-royal-letter

Ex-premier issues sarcastic response over being dropped from inauguration ceremony

KUALA LUMPUR • An invitation for Tun Dr Mahathir Mohamad to attend the inauguration next week of Malaysia’s new King at Istana Negara or national palace has been withdrawn, earning a sarcastic response from the former prime minister.

Writing in his blog yesterday, Dr Mahathir said: “It appeared that this national event is actually part of a political event. I apologise for making the wrong assumption.”

He said: “I will remember that Istana Negara belongs to Najib and Barisan Nasional”, referring to Prime Minister Najib Razak and the ruling coalition.
.

An aide to Dr Mahathir was quoted by the Malaysiakini news site as saying that a letter, dated Monday, to withdraw the invitation was hand-delivered to the former leader’s office in Putrajaya on Wednesday.

An aide to Dr Mahathir was quoted by the Malaysiakini news site as saying that a letter, dated Monday, to withdraw the invitation was hand-delivered to the former leader’s office in Putrajaya on Wednesday. 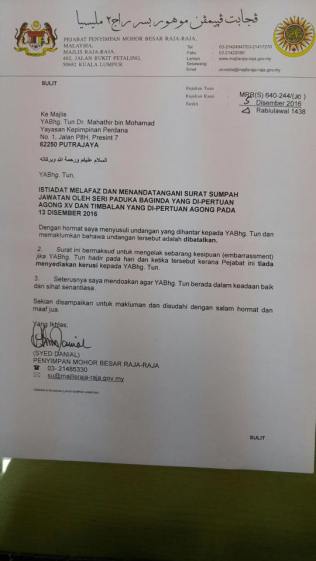 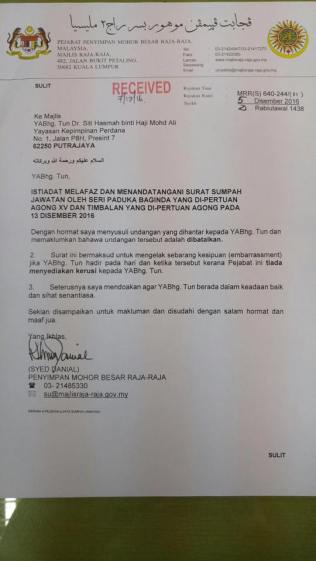 YOU’RE not welcome. After inviting former prime minister Tun Dr Mahathir Mohamad to his inauguration at the Istana Negara on Dec 13, it seems Malaysia’s new King has changed his mind.
..

The rejection, of course, drew a swift and sarcastic response from Dr Mahathir himself, who wrote on his blog yesterday (Dec 8).

He said: “It appeared that this national event is actually part of a political event. I apologise for making the wrong assumption.”
.

Curious to know what the letter said? Well, we decided to take a stab at translating it – here you go:

With all due respect, this is a follow up on the invitation that was sent to YABhg Tun that your invitation has been withdrawn.

2. This letter serves to avoid any embarrassment to YABhg Tun if you were to attend as this Office will not be reserving any seat for YABhg Tun.

3. I pray that YABhg Tun will always be in the best of health.

The announcement above has been made and this letter will end off with a salutation and an apology.

KEEPER OF THE RULER’S SEAL