The PFF, a state incentive launched in 2015, aims to help excellent Penang students to further their studies in various fields, including science, technology, engineering and mathematics. So far, 300 Penang students have received scholarship from PFF.

He said the money, which had grown to RM1.038 million with interest accrued, would be used as scholarship for excellent Penang-born students to continue their studies.

“Thank you to every Malaysian who contributed,” he told a press conference here today, which was also attended by state Welfare, Caring Society and Environment Committee chairman Phee Boon Poh, who was the guarantor for Lim in the court case.

The PFF, a state incentive launched in 2015, aims to help excellent Penang students to further their studies in various fields, including science, technology, engineering and mathematics. So far, 300 Penang students have received scholarship from PFF.

Bank in or transfer money to

Penang Umno deputy chairperson Reezal Merican Naina Merican has been reminded the public’s donations to Penang Chief Minister Lim Guan Eng’s cause came at their own free will, and not from some “mysterious” foreign donor.
…

“It is the general public that donated to DAP, and not mysterious foreign donors like how Umno has been receiving, which has raised many questions despite conflicting statements by it’s leaders,” he added.

BN leaders yesterday criticised DAP’s donation drive for Lim’s RM1 million bail after the latter managed to hit its target in under 24 hours.

30 Puchong residents gathered to donate RM10 each to DAP to show solidarity with Penang Chief Minister Lim Guan Eng, despite the party ending its donation drive for his bail money on Friday, following the corruption charges against him on Thursday.

Penang Umno deputy chairperson Reezal Merican Naina Merican however said Lim should not be burdening the public with donations to pay for his RM1 million bail.

DAP defended the drive saying they did not have a rich Arab donor to fund them, while MCA fumed that the bail had already been paid, making the donation drive unnecessary.

Bank in or transfer money to 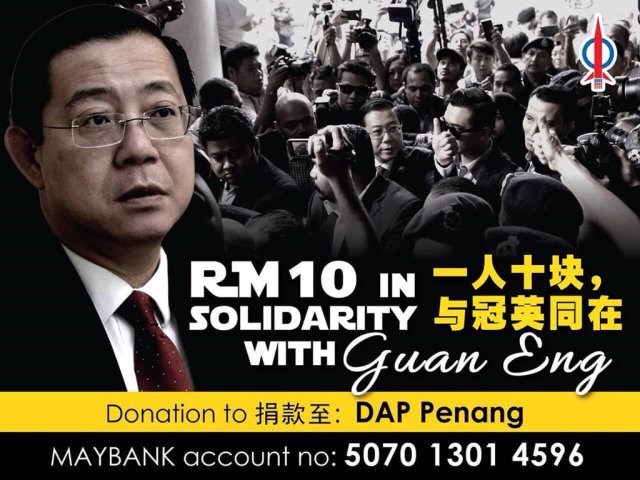 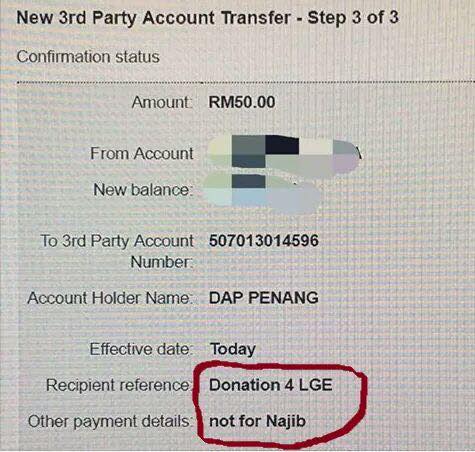 Even businesses believe in the case FOR Lim Guan Eng?

The money collected was to restore party funds used to bail out Lim from court, after he claimed trial for two graft charges yesterday.

State DAP Chairman Chow Kon Yeow said the party had received RM1,009,000 by 2pm and was thankful for the generous donations received from the public.

“We would like to thank Malaysians for parting with their hard-earned money. We thank you for your sacrifice.

“We would like to announce that the donation campaign has been stopped as we have hit our target,” he told reporters at the Penang DAP headquarters in Rangoon Road here today.

RM10 in solidarity with Guan Eng 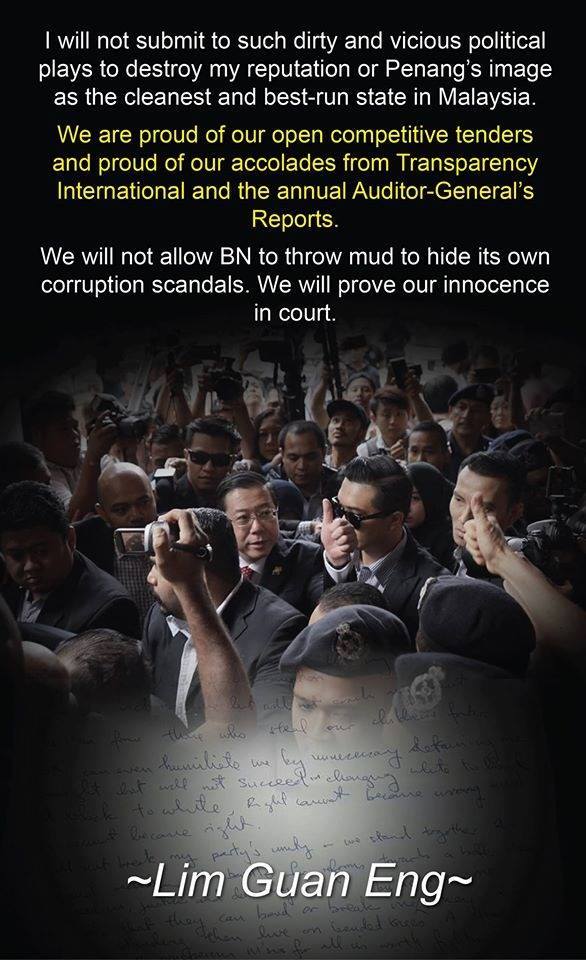 DAP Penang condemns the politically motivated charges against DAP Secretary-General and Penang Chief Minister Saudara Lim Guan Eng, as well as the heavy-handed manner in which he has been treated.

Saudara Guan Eng was arrested in his office in the evening of 29 June 2016 after chairing a State Exco meeting, and was then held in detention overnight by the MACC. This was unnecessary to say the least, especially when Saudara Guan Eng has given full cooperation in the investigation thus far.

Furthermore, Saudara Guan Eng’s bail amount was set by the High Court at RM1 million, an amount that is extremely excessive, given that bail is simply meant as a mechanism to prevent an accused person from absconding. Clearly, there is no such risk in this case.

Following this, DAP Penang has received many requests from the public who wish to contribute to the bail amount of RM1 million.

For all Malaysians who wish to help and stand in solidarity with Saudara Guan Eng, we encourage you to donate RM10 to:

We thank you graciously for your contribution in this collective struggle against injustice and abuse of power.