Planned and organized: The attack on Lim Kit Siang in Masai, Johore 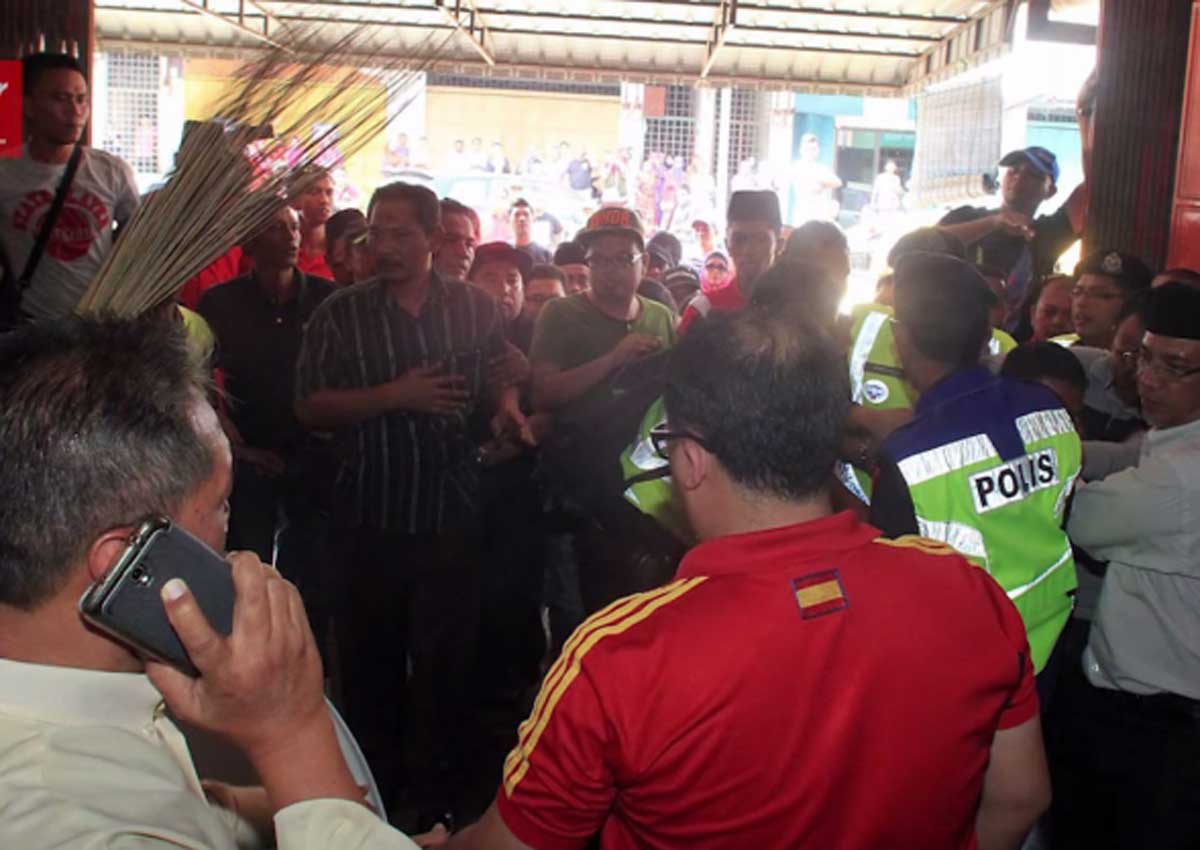 JOHOR BARU: Police have detained four suspects believed to have been involved in the ruckus that broke out during a DAP talk near Pasir Gudang here last week.

“Investigations are being carried out under Section 506 of the Penal Code for criminal intimidation and Section 147 of the same code for rioting.

“We have been actively conducting investigations to identify the group that had caused the commotion,” he said in a statement here on Thursday.

KUCHING, July 7 — Boxed in by the crowd of over 50 hecklers who were throwing cups and bowls and overturning tables at his group during DAP’s “Kopitiam Dialog” event in Johor last week, Sarawak leader Mordi Bimol said he remembered fearing for his life as he was certain the group wanted to inflict harm.

Recounting the ordeal to Malay Mail Online today, Mordi said the most terrifying moment was when he and several other DAP leaders were trapped in the coffeeshop in Taman Megah Ria, Masai, Johor, for nearly 20 minutes, surrounded by their attackers.

“I have never experienced this kind of thing before,” said the 33-year-old Tasik Biru DAP branch chairman.

“They were very aggressive, dangerous and meant to cause harm to us,” he added, saying that although he was not hurt, he was still shaken and traumatised by the incident.

“But they held (Kluang MP) Liew Chin Tong by the throat, and one of them threw a bottle at a PAS guy Syed Othman. They also slapped him on the face,” Mordi added.

He said the men called him and another Sarawak DAP leader Thomas Tegong Laka “babi Sarawak” (Sarawak pigs) and shouted at them to return to Sarawak.

Did Johor MB consent to pre-planned attack on Kit Siang?

Umno Pasir Gudang is now gripped by fear of losing both the parliamentary seat and Khaled Nordin’s seat of Permas.

Did desperation over the possibility of losing his own state seat of Permas drive Johor Menteri Besar Datuk Seri Khaled Nordin to approve, whether implicitly or explicitly, the pre-planned attack on DAP’s Forum Kedai Kopi in Masai, Pasir Gudang?

It has now been confirmed with photo evidence that the mob which attacked DAP Parliamentary Leader Lim Kit Siang and other leaders on Sunday, July 5 was led by Umno Pasir Gudang Youth Chief Azman Ja’afar.

When asked by the media on July 6, Khaled Nordin refused to take responsibility for the incident. He claimed he was in Kuala Lumpur when the incident happened.

Khaled also said that DAP should have foreseen what would happen as the event was publicised over social media. Further, he said, Pasir Gudang has been the stronghold of Umno with 21,000 members who are not robots and whose personal actions should be attributed to Umno.
…

Khaled must answer whether he had, explicitly or implicitly, consented to the acts of hooliganism led by Azman Ja’afar and whether the planned attack was agreed upon by Khaled to prevent the DAP and its allies from conducting events in Permas as Khaled fears he will be defeated in the coming election.
…

Umno nearly lost Khaled’s former parliamentary seat of Pasir Gudang to Parti Keadilan Rakyat in the 2013 general election. Umno’s candidate Normala Abdul Samad won with a mere margin of 1.1 percent, which was the third most dangerous seat nationally for Barisan Nasional after Bentong (0.7%) and Kuala Selangor (0.8%).

Permas was a BN marginal seat but Khaled managed to win with a comfortable majority (23,952 vs 18,200) in 2013 as he was then touted as the Menteri Besar-to-be. He is fully aware that Umno’s position is now weakened by the implementation of the Goods and Services Tax (GST) and various scandals that unfolded recently.

This explains why the DAP Forum Kedai Kopi featuring famous sons of Sarawak Mordi Anak Bimol and Thomas Sixtus Tegong Laka to meet Dayak voters in Permas by DAP had to be prevented at all cost.

Umno Pasir Gudang is now gripped by fear of losing both the parliamentary seat and Khaled’s seat of Permas.

JOHOR BARU: After serving the public for over 20 years, it was the first time former Johor PAS committee member Syed Othman Abdullah was slapped in the face.

He was among those attacked by a group of men who barged into a coffeeshop in the midst of the talk attended by DAP leaders on Sunday, including party adviser Lim Kit Siang and Johor chairman Liew Chin Tong.

Syed Othman was slapped on his way out as he was escorting Lim to his vehicle when the commotion broke out in Taman Megah Ria, Seri Alam.

“I have been pushed and spat at before but have never been slapped like that,” Syed Othman, better known as Arab, said after lodging a report at the Seri Alam police district headquarters yesterday.

Syed Othman, who renounced his PAS membership last month, said he went there on his own accord to show his support for DAP.

DAP secretary-general Lim Guan Eng has accused pro-Umno supporters of being behind the attack at a DAP function in Masai, Johor, yesterday. Lim described the thugs as “desperados” out to divert the attention of the public from the explosive 1MDB scandal.
…
He also cited Umno’s internal crisis where Najib is having a spat with former premier Dr Mahathir Mohamed who has asked the PM to resign and explain the 1MDB fiasco.
…
Meanwhile, Lim said in attacking DAP leaders, Umno has shown their disrespect towards the Ibans, who live in the area, and who patronised the coffee-shop. It is learnt that DAP held the event in the coffee-shop as part of their programme to reach out to the indigenous community who are living and working in Johor. “Such disrespect would become an issue with the Ibans in Sarawak,” Lim said.

Ku Nan says no proof yet but believes Kit Siang provoked Umno men into throwing cups, bowls at him

KUALA LUMPUR, July 6 — DAP’s Lim Kit Siang had likely provoked the violence yesterday at a Johor function that reportedly saw cups, bowls and even a broom thrown at him by individuals believed to be Umno members, Datuk Seri Tengku Adnan Tengku Mansor said.

Although the Umno secretary-general admitted that he has yet to obtain proof of provocation by the DAP, he said ground reports of the incident at Taman Megah Ria, Masai, indicated that the trouble only started when Lim said something deemed insulting at the event.

“Johor Umno will look into it. I don’t know what happened but I have to say this: the opposition shouldn’t provoke la. This is the same thing as what happened in Penang, they provoked and you know humans will be humans. “So don’t do provocation… I heard that Kit Siang said something, not there but elsewhere and humans when you provoke them they will react,” Tengku Adnan, or popularly known as Ku Nan, told Malay Mail Online.

WILL THE COPS ACT? This constable may not be representative of the PDRM. 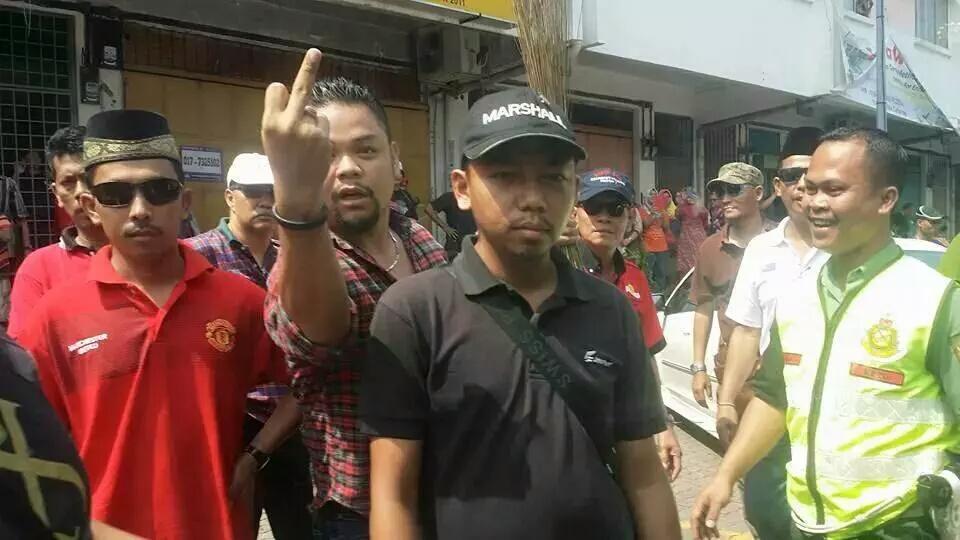 The attack by a group of thugs at a kopitiam in Masai, Johor today was the first violent incident DAP veteran leader Lim Kit Siang had faced in his political career spanning almost half a century.

“It was very disgraceful for this to happen during the Ramadan month,” Lim told The Malaysian Insider. It was also described as the worst treatment the party had faced in Johor since it started pushing hard to capture it with its Pakatan Rakyat partners.

Lim said he was not shocked that the attack took place but was “disgusted” by the behaviour of those who stopped the dialogue session. “We went in and the group of people were already there, as a WhatsApp message was being spread by Pasir Gudang Umno members,” Lim said.

“They had probably thought that with the message, I would feel threatened and not show up. “We went on for about half an hour, before they started making noise demanding that I leave the place. Then they started throwing all sorts of things at us,” he added.

“This culture of political gangsterism has to stop and be reigned in. The Johor MB (Datuk Seri Mohd Khaled Nordin) must be held accountable,” he said.

The incident occured in the constituency of Pasir Gudang, which comes under the Johor MB Datuk Seri Mohd Khaled Nordin.

Lim told The Malaysian Insider today that bowls, plates, and punches were aimed at the DAP entourage who were conducting the talk with some Iban workers living in Johor Baharu.

He had escaped unhurt, both those escorting him to his car were dealt with punches, while Johor DAP chief Liew Chin Tong had people allegedly trying to choke him when he made his way to his car. 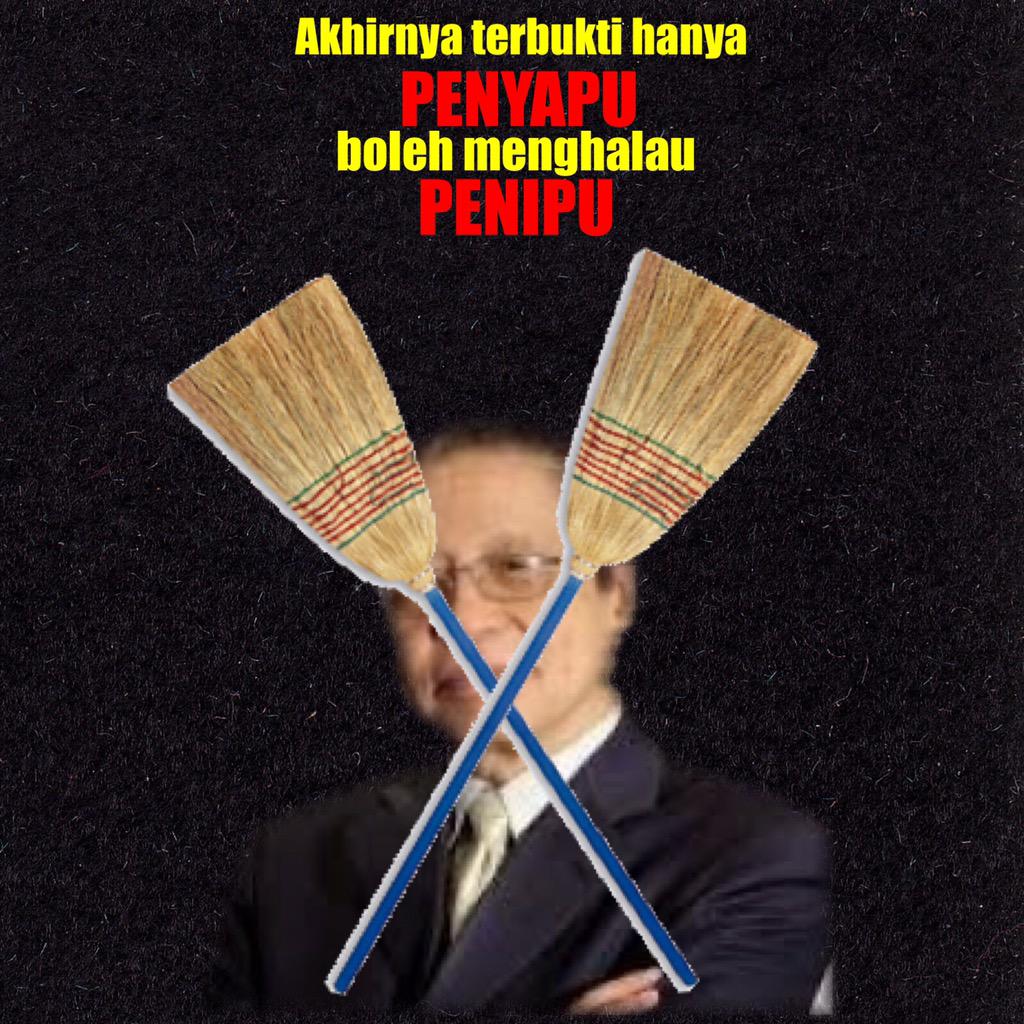 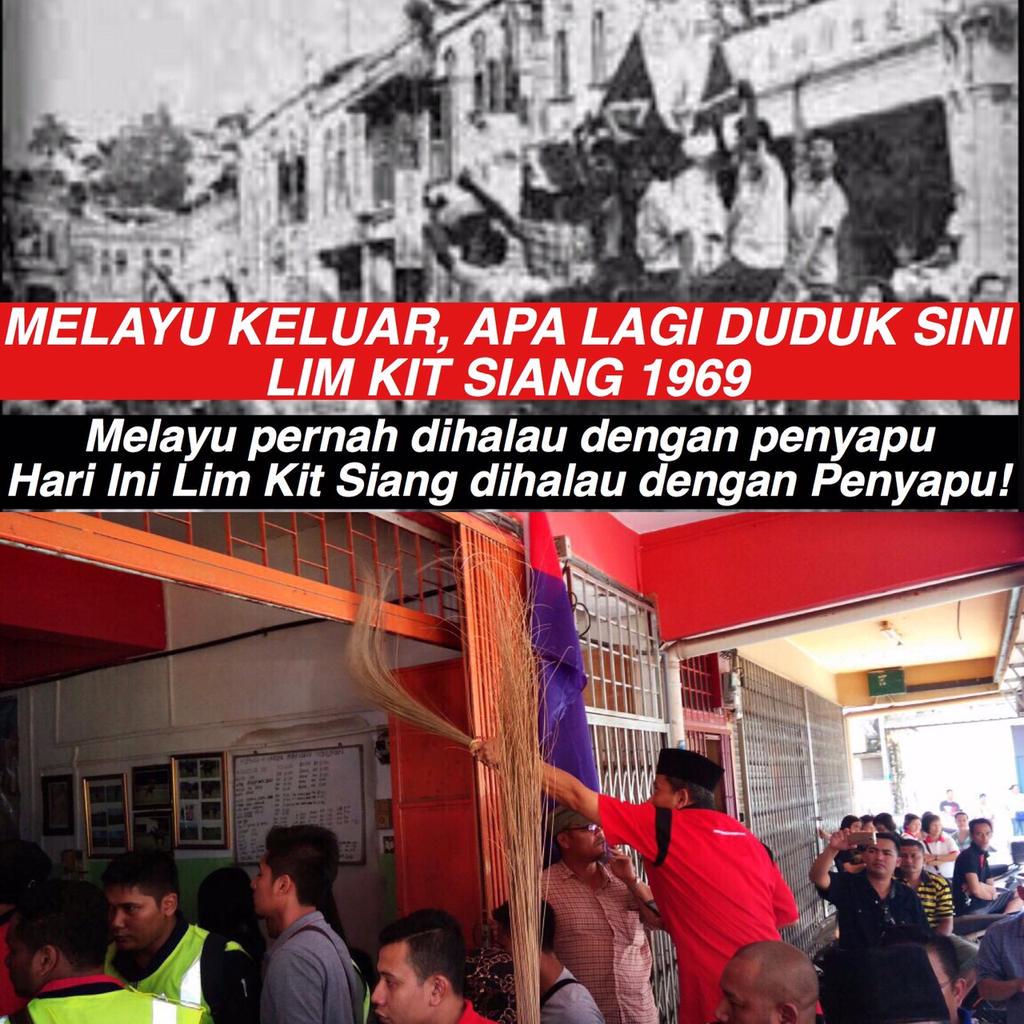 — https://www.facebook.com/mordibimol/videos/vb.100002398279309/856669827756285/?type=2&theater — Free Malaysia Today Lim had been speaking at a Kopitiam Dialogue ceramah, one of a series by Johor DAP. Lim was to have spoken to Sabah and Sarawak natives working in the industrial area of Pasir Gudang nearby. Johor DAP leader Liew Chin Tong said he recognised some of group as members of Pasir Gudang Umno division. “I was speaking at the time when they attacked. They broke some tables and threw water bottles and bowls,” he said. A phone text message had been circulated recently, calling on the public to stop the event, Liew said, according to the report. Liew urged Pasir Gudang Umno leader Khaled Nordin, who is Johor menteri besar, to take responsibility for the group’s action. He called on Johor police to arrest those responsible, and commended the police officers on duty at the event for trying to stop the mob. …

A DAP function in a coffeeshop in Masai, Johor was attacked by a group of thugs who wanted to prevent DAP veteran Lim Kit Siang from speaking.

Shortly after the event began at 2pm, the group of about 50 people stormed the venue and began hurling projectiles – cups, plastic bowls and even a broom – towards Lim. According to eye-witnesses, Lim was unhurt, but those who formed a shield to protect him were. … The event was part of Johor DAP’s ongoing ‘Kopitiam Dialogue’ series. Similar events in the past have went on without any untoward incidents. This particular event was aimed at allowing Lim to address the indigenous people from Sabah and Sarawak who are working in neighbouring Pasir Gudang, which hosts many industrial zones.

Kluang MP Liew Ching Tong (photo, brown shirt, on the right), who was among those present, claimed that he could recognise some of the mob members as Pasir Gudang Umno division office bearers. “I was speaking at the time when they attacked. They broke some tables and threw water bottles and bowls,” he said. He added that he was informed that there was a phone text message being circulated recently, urging the public to gather at a mosque in Taman Megah Ria to stop the event. 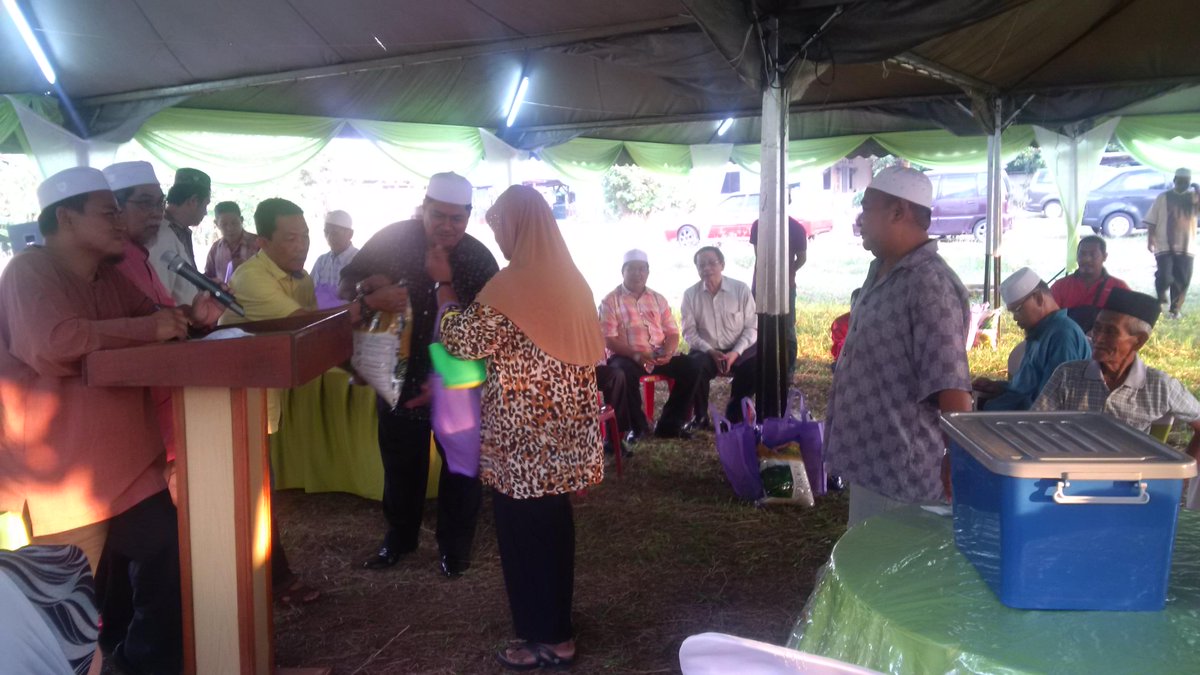