Posted on January 5, 2015 by weehingthong

The assumption is that budget carriers are able to sell cheap tickets because they stint on everything else, including critical areas like pilot training and aircraft maintenance.

The price of an air ticket has nothing to do with safety: Experts

Price of an air ticket has nothing to do with safety: Experts http://goo.gl/7hABN4 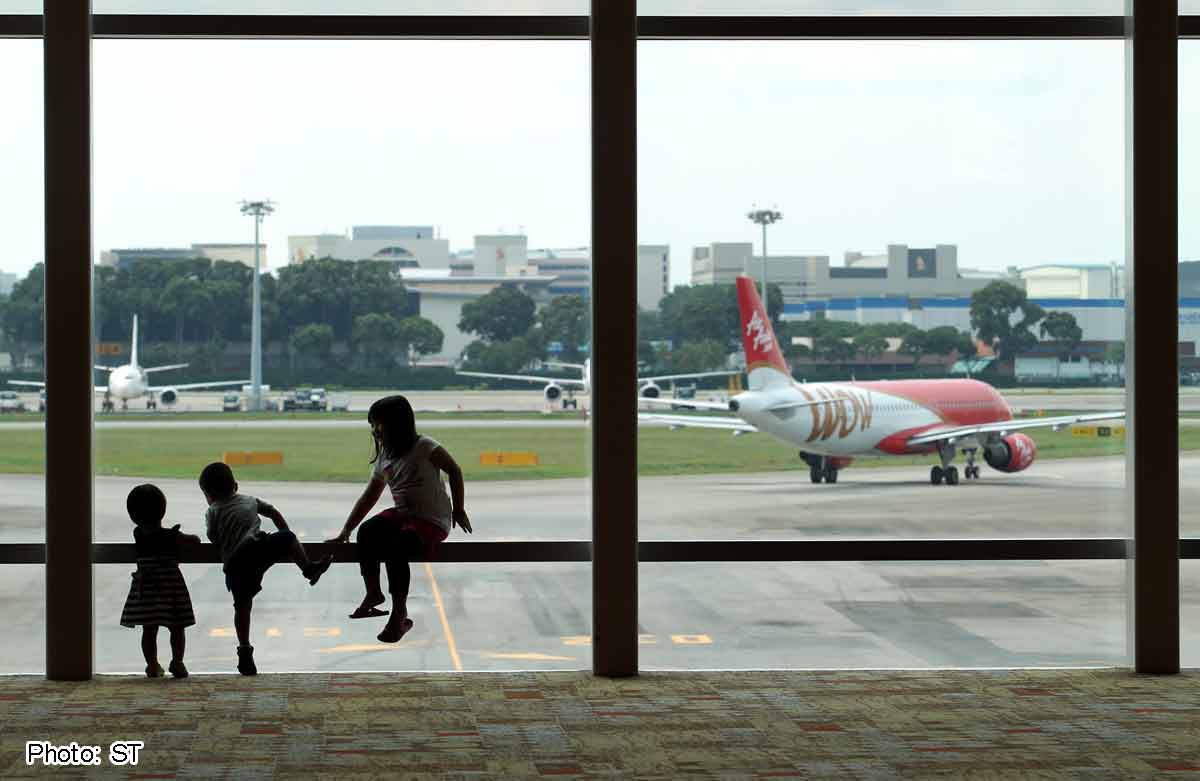 The same is being asked in the aftermath of the Dec 28 crash of Indonesia AirAsia Flight QZ8501, which was carrying 162 people from Surabaya to Singapore when it plunged into the Java Sea.

Even as rough weather has been flagged as the likely cause of the tragedy, Indonesia’s Transport Minister Ignasius Jonan is pushing for a new rule he believes will ensure that budget carriers have sufficient funds for safety- related costs.

The plan is to set the lowest possible fare for such carriers at 40 per cent of the highest fare.

The minister has not said so explicitly, but it is clear the move is driven by the assumption that budget carriers are able to sell cheap tickets because they stint on everything else, including critical areas like pilot training and aircraft maintenance.

The assumption is flawed and baseless, experts said.

Safety has less to do with whether it is a budget or full-service carrier, and more with how committed an airline is to safety, the quality of people maintaining the planes and the commitment of local regulators towards ensuring that the standards set are met.

IT IS BECOMING INCREASINGLY OBVIOUS THAT IT IS THE INDONESIAN END THAT IS THE PROBLEM rather than any particular airline.

AirAsia Flight QZ8501: Indonesia suspends 61 flights from 5 airlines found to have no valid permits to fly from the country

JAKARTA – Indonesia has suspended 61 flights from five airlines who have been found to have no valid permits to fly from the country, its transport minister Ignasius Jonan said on Friday.
…
Mr Jonan also said that the ministry has suspended 11 officials for negligence and have audited 5 airports in the country since the ill-fated crash.

He said the transport ministry will set up an online system by the end of January to monitor flight permits.

WHICH ARE THE AIRLINES AFFECTED?
They are Garuda, Lion Air, Wings Air, Trans Nusa, Susdi Air and AirAsia.

Jakarta: Indonesia’s transport ministry said Friday it had suspended 61 domestic flight routes operated by national flag carrier Garuda and a group of budget airlines because they did not have permits.
…
“Garuda Indonesia has committed four violations, Lion Air has 35 violations, Wings Air has 18 violations, Trans Nusa has one violation, and Susi Air has 3 violations,” Transport Minister Ignasius Jonan told a press conference.

“They committed violations of their permits. They don’t have the flight permits (for the 61 routes). It’s the same violation as AirAsia.”

The transport ministry had already banned Indonesia AirAsia from flying between Surabaya, the nation’s second biggest city, to Singapore.

JUST IN: 61 flights from 5 airlines have been found to have no valid permits: Indonesia’s Transport minister Ignatius Jonas
…

Indonesia has suspended 11 officials from negligence and did audits on 5 airports: #Jonas

Did Indonesia permit AirAsia Flight QZ8501 to fly on a Sunday? 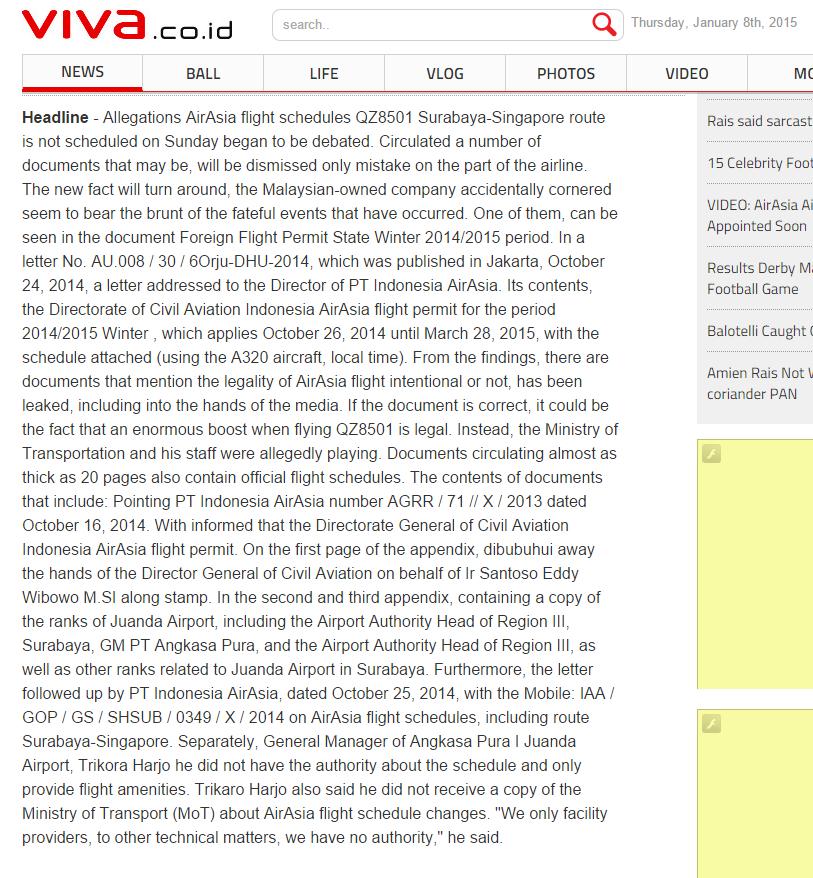 AN AIRASIA FLIGHT to Palembang on Tuesday was cancelled due to a flight authorisation issue. All 170 passengers waited for more than four hours before they were transferred to a Sriwijaya flight.
—

One AirAsia passenger, who only gave his name as Andre, 25, said that passengers had been advised to stay at a hotel provided by the airline before leaving for Palembang the following day with another airline.

The passengers, however, rejected the offer and demanded to fly on Tuesday.

“We demanded to be flown immediately because each of the passengers had his or her own plans,” said Andre. Their demand was eventually accepted by AirAsia, which transferred all passengers to a Sriwijaya flight.

KNIA authority chief Nazaruddin Ahmad said the cancellation of the AirAsia flight to Palembang was due to a flight authorisation issue.

“AirAsia has no flight schedule at KNIA today, so we cancelled its flights. This is a permit rather than a technical issue,” Mr Nazaruddin said in a press conference at the airport on Tuesday.

He added that AirAsia was only permitted to fly from the airport on Mondays, Thursdays, Fridays and Sundays; the airline is not allowed to fly on other days.

WHO WOULD YOU BELIEVE, A POLITICIAN WHO IS A MINISTER, OR TONY FERNANDES?

Tony Fernandes: I made no such admission.

THE TRUTH IS OUT!

AirAsia Flight QZ8501 had permission to fly from Surabaya to Singapore as revealed by the communication between QZ8501and Air Traffic Control.

Click on this link for the audio clip, uploaded on Soundcloud: http://www.tnp.sg/news/leaked-communication-between-airasia-flight-qz8501-and-air-traffic-control

WHO WOULD YOU BELIEVE, A POLITICIAN WHO IS A MINISTER, OR TONY FERNANDES?

Tony Fernandes: I made no such admission.

AirAsia QZ8501: We have approvals to fly to Surabaya, says Fernandes

PANGKALAN BUN – AirAsia chief Tony Fernandes has never admitted that Indonesia AirAsia has no permit to fly the Surabaya-Singapore route, his office said in a statement on Wednesday.

“We have the right to fly Surabaya-Singapore. We had flown that schedule and had rights for seven days a week,” the statement quoted Fernandes as saying.

“We have secured both slots as well as approval from both Indonesia and Singapore. What happened was purely an administrative error,” it added.
…

“It is good that Ministry of Transport is evaluating coordination between slot coordinator and airports so that we are able to prevent this from reccuring,” he said according to the statement. “The process has become clear now. I also recommend what is being implemented in Singapore; an intergrated computerised system so that everyone is on the same page.” – The Straits Times/ANN

“Tony Admitted To Me AirAsia QZ8501 Operated Without Permit”

For background information, AirAsia only had permission to fly the Surabaya-Singapore route on Mondays, Tuesdays, Thursdays and Saturdays. The flight (QZ8501) which crashed took off on Sunday, December 28.

The Minister further stated  (Tuesday 6-1-2015) that “Tony Fernandez has admitted to me of the unauthorised route.”

According to the said Minister, after having admitted the violation, Tony still hope that AirAsia will still be given the Surabaya – Singapore route. …

THE TRUTH IS OUT! AirAsia Flight QZ8501 had permission to fly from Surabaya to Singapore.

Indonesia’s Transportation Ministry had reportedly said Saturday that AirAsia was not allowed to fly the Surabaya-Singapore route the Sunday when the plane crashed mid-flight into the Java Sea off Borneo.

However, a leaked transcript contradicts this claim. Air traffic control at Surabaya’s Juanda International Airport had given approval to Indonesia AirAsia Flight QZ8501 to fly to Singapore from Surabaya.

Indonesian news website Kompas revealed the transcript of a 20-minute Juanda ATC recording last December 28 at 5.25am local time, 10 minutes before the doomed flight carrying 162 on board departed from Juanda International Airport at 5.35am, that gave clearance to Flight QZ8501 to fly to an initial altitude of 24,000 feet.

The conversation between Juanda ATC and the plane’s cockpit before that statement goes like this, according to Kompas:

THE AXE STILL FALLS: MORE ARE SUSPENDED. Scapegoats, that is, those considered low enough to take the blame. 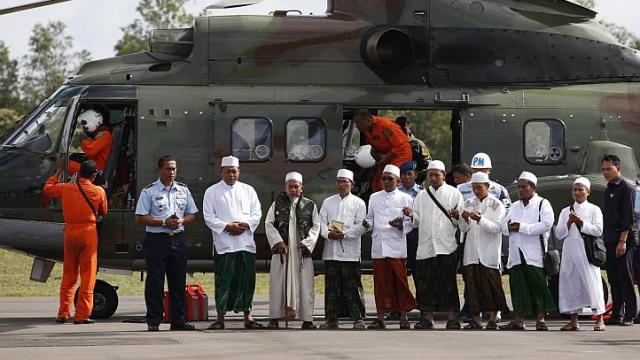 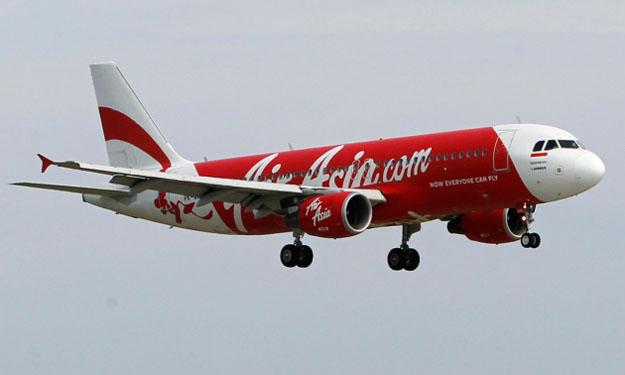 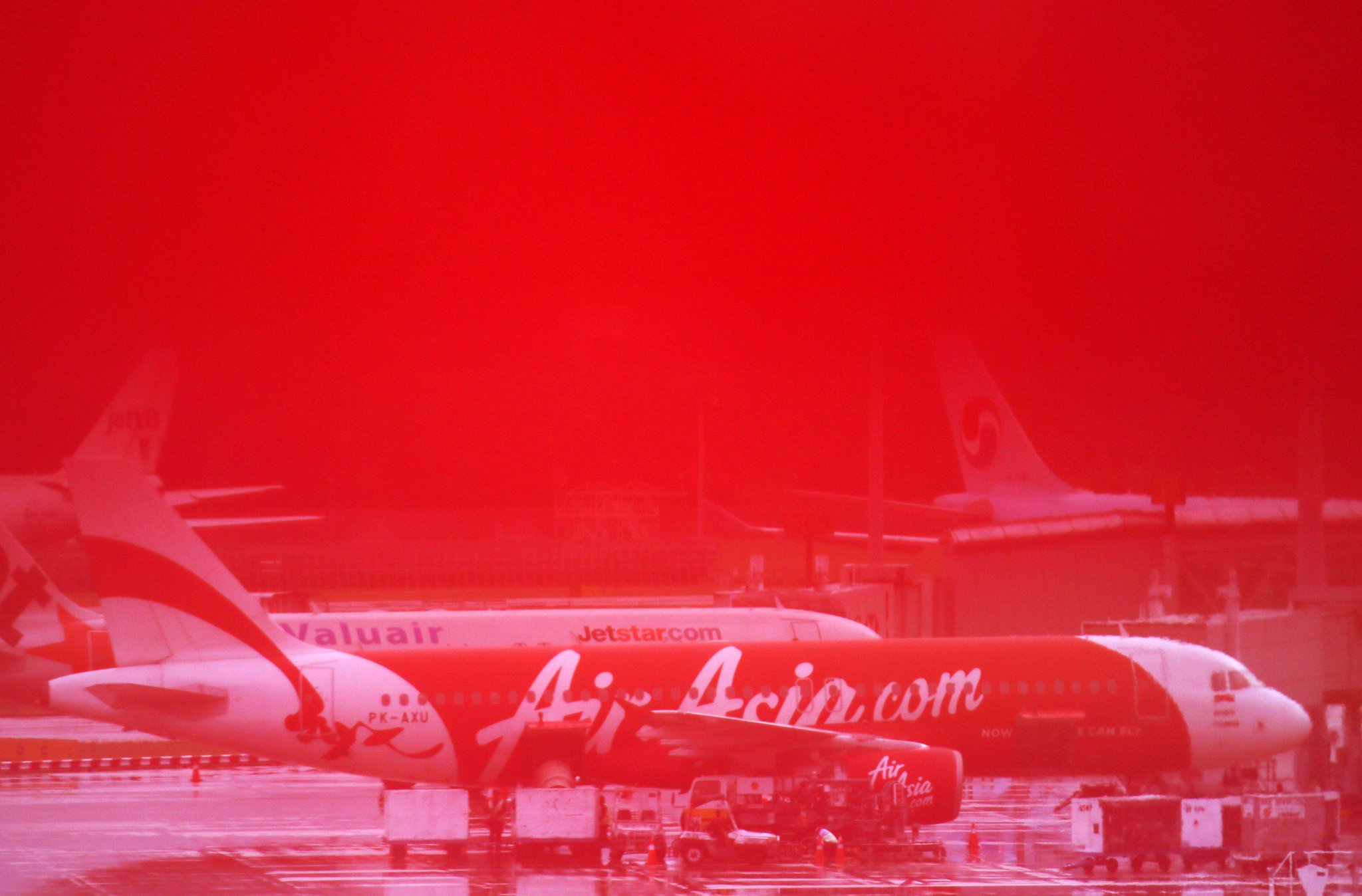 In response to the instruction, AP I immediately suspended its operation manager and apron movement control supervisor.
…

“Investigations are under way to ascertain how the airline could fly without the ministry’s knowledge,” Mr Djoko said, adding that similar sanctions would be imposed on any ministry officials implicated.

LATEST: IT IS NOT ONLY AIRASIA FLIGHTS THAT WERE BARRED. Other flights were by Lion Air, Wings Air, Trigana Air and Kalstar.

Ministry okays sixteen flights that had been barred.

4.45pm: Indonesia’s Transport Ministry now says that it has lifted the bar imposed on 16 flights from four airlines.

It says that from now onwards, all flights that are not according to scheduled routes will be barred immediately.

Now, Yuristo Ardi says there are 16 flights barred – eight from Lion Air, five from AirAsia and one each from Wings Air, Trigana Air and Kalstar.

This differs from what was said by the general manager of PT Angkasa Pura.

INDONESIA HAS SUSPENDED AIRASIA’S SURABAYA-SINGAPORE FLIGHT. The transport ministry is currently checking the airline’s flight schedule to see if they match the airline’s permits or agreements.

The axe now falls on both Transport ministry and Airport staff.

They say that you shouldn’t cut off your nose to spite your face. That seems to be what the Transport Minister is doing.

Malaysia and Singapore are the largest contributors of foreign tourists to Indonesia, and it is AirAsia that brings the majority of the tourists. In suspending AirAsia flights, the Transport Minister undermines the tourist industry. 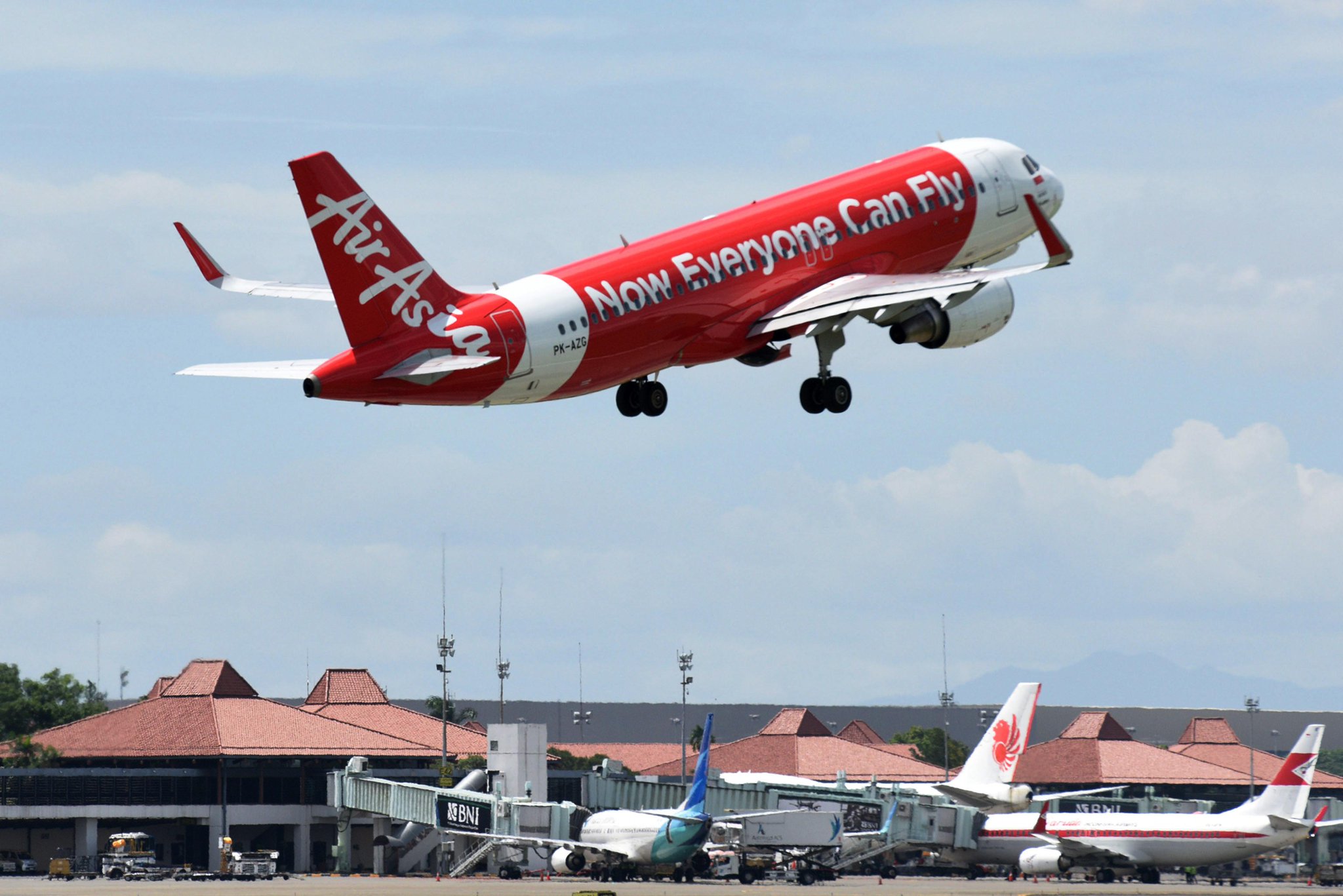 The Association of Indonesian Tours and Travel Agencies (Asita) says that AirAsia plays a crucial role in supporting the government’s program to attract more foreign tourists to Indonesia. — PHOTO: AFP

“In terms of business, particularly in tourism, like it or not, we have to acknowledged that AirAsia has made a large contribution to the development of Indonesian tourism,” the association’s Yogyakarta branch head, Edwin Ismedi Himna, said as quoted by Antara news agency in Jakarta on Tuesday.

An AirAsia plane in Surabaya on Jan 3, 2015. Indonesia’s transport ministry has ordered airport authorities to take action against staff who allowed Indonesia AirAsia to fly outside its approved schedule. — PHOTO: SPH

JAKARTA – Indonesia’s transport ministry has ordered airport authorities to take action against staff who allowed Indonesia AirAsia to fly outside its approved schedule.

This comes after the ministry said the airline was not allowed to fly the Surabaya-Singapore route on Sunday. The missing flight QZ8501 had taken off on a Sunday.

“We issued orders to them to move these staff from a position related to flight operations,” Djoko Murjatmodjo, acting director-general of air transportation, said on Monday.

If there were staff from the transport ministry who were also involved, the ministry will take action against them, he added.

JUST IN: #QZ8501 : Indonesia orders airport authorities to take action against staff who allowed airline to fly outside approved schedule.