Li Yang, the chief executive of CAA Resources, told the New York Times that he had paid about US$100,000 (RM336,501.90) per royal title for the politicians. The politicians from the “ruling party” have indirect stakes in the mine, NYT reported. According to the US daily, Li also said that he was “simply following common practices in Malaysia”.

PETALING JAYA: The Malaysian Anti-Corruption Commission (MACC) will investigate an allegation made by a businessman from China who said he had given Barisan Nasional politicians money for them to obtain datukships.

MACC investigations division director Datuk Mohd Jamidan Abdullah said the anti-graft body would meet with China-based CAA Resources chairman and chief executive Li Yang, who claimed that he had paid the politicians around US$100,000 (RM335,650) each.

In an interview with the New York Times, Li revealed that that this was done to facilitate his company’s iron ore mining operations in Bukit Besi, Terengganu.

“We are looking at his allegation seriously and we will meet him to get more details on this matter…we do not tolerate any form of corruption,” Mohd Jamidan said in a statement.

Govt shld retract mining licenses given to CAA Resources IF allegations made by Chairman Dato Li Yang is not true. 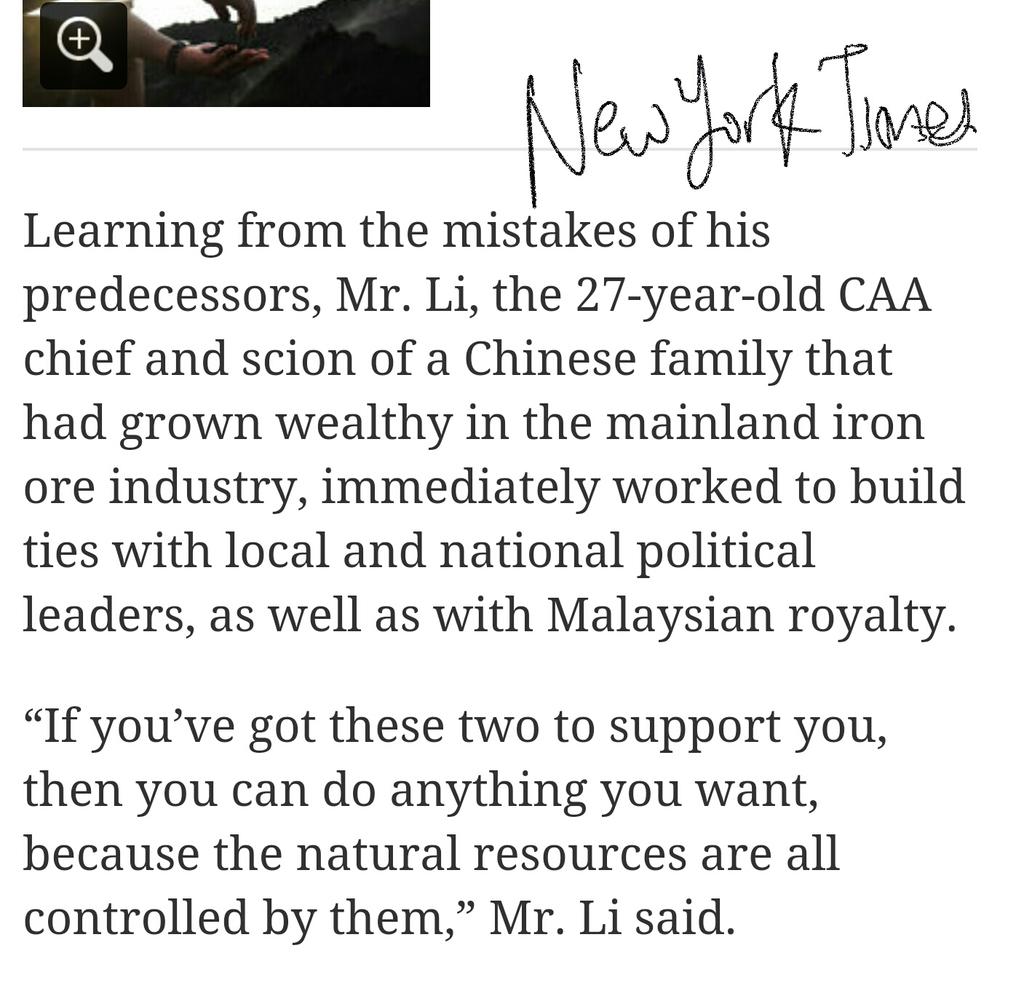 A China-based mining company admitted to paying for the datukships of BN politicians in order to ease operations at its iron ore mine in Bukit Besi, Terengganu.

The politicians from the “ruling party” have indirect stakes in the mine, NYT reported.

According to the report, Li, the 27-year-old son of a wealthy iron magnate in China, did so as part of his plan to “build ties” with politicians and royalty.

“If you’ve got these two to support you, then you can do anything you want, because the natural resources are all controlled by them,” Li is quoted as saying.

According to the US daily, Li also said that he was “simply following common practices in Malaysia”.

In immediate response, Terengganu Menteri Besar Ahmad Razif Abdul Rahman said he knows nothing about it.

“I have no knowlege about this. I’m sorry,” Ahmad Razif, who is also in charge of natural resources, said in a text message to Malaysiakini.

By The New York Times @nytimes

CAA Resources, controlled by China, reopened “Iron Hill,” a dormant iron mine in Bukit Besi, Malaysia, and is ramping up production despite the ore’s falling price.

BUKIT BESI, Malaysia — Giant mining equipment has stripped away the palm trees and other vegetation from a jungle bluff here with a Malay name that translates to “Iron Hill.” Huge power shovels gouge long furrows down cliffs of fuchsia clay, scooping out the shiny black iron ore at their base.

The mine here operates round the clock, seven days a week. The Chinese-controlled CAA Resources, which reopened the dormant mine early this year, has rapidly ramped up production to an annual rate of 500,000 tons, with plans to double it by next year.

Click on this for the rest of the article: