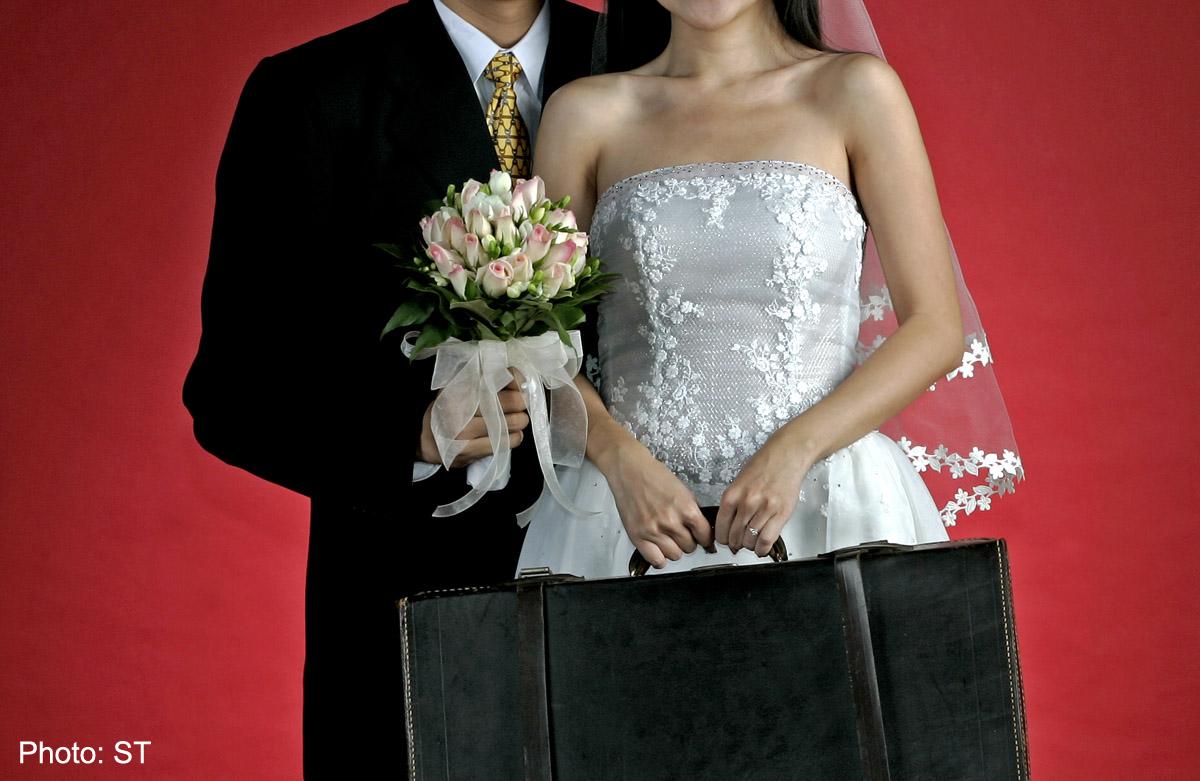 SHANGHAI – Police in northern China are investigating the disappearance of more than 100 Vietnamese women who had been sold as wives to Chinese men via a broker who is also missing, the China Daily reported on Thursday.

The women vanished from Handan county in Hebei province near Beijing at the end of November, and an unidentified official suspected the disappearance was organised, according to the newspaper.

Since the start of the year, a woman from Vietnam who married a local man and had been living in the country for around 20 years, said she could introduce bachelors to Vietnamese brides.
…

The newspaper quoted the police of Handan as saying international matchmaking services and cross-border marriage brokerages were illegal, and the case may be related to human trafficking. 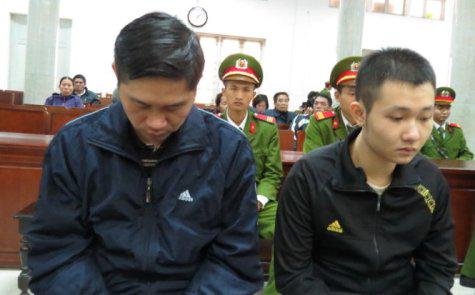 A Vietnam court has sentenced a cosmetic surgeon to 19 years in prison for throwing the body of a female patient into a river after she died during a botched surgery at his private beauty salon in Hanoi last year.

The Hanoi People’s Court gave the sentence to Nguyen Manh Tuong, 41, the owner of the Cat Tuong beauty salon in Hai Ba Trung District of the capital city on Friday.

Tuong was also ordered to pay over VND585 million (US$28,125) in compensation to the family of the victim.

In addition, he will also be banned from practicing as a surgeon for five years after being released from prison.

Dao Quang Khanh, a security guard at the beauty salon, was sentenced to 33 months in jail for helping the surgeon dump the body into the river.

This was on aVietnam Airlines flight!

ALL TIED UP: Mark Ansley allegedly helped restrain a passenger who tried to open the emergency exit on a flight.

An Auckland man says he helped restrain an agitated passenger who tried to open the emergency exit on a Vietnam Airlines flight.

Mark Ansley said he was alerted to the man on board the flight from Ho Chi Minh City to Sydney when he was awoken by screams from other passengers.

“This p***k tried to kill himself and all others onboard VN773 by jumping out emergency exit,” Ansley said on his Facebook page.

“Luckily three lads held him down while I stunned him with head shots then cable tied him,” he said.

The incident happened about an hour into the flight.

Ansley said he became concerned the agitated man may have been a distraction for something else.

The air crew crowded round the man after he was incapacitated, and it turned out the door could not have been opened at the altitude the plane was flying.

The row over the South China Sea and anti-China violence in tightly-controlled Vietnam have raised fears of an escalation in tensions between the Communist neighbours.

A Chinese oil rig in the disputed waters off the Paracel Islands in the South China Sea. (Internet photo)

24 minutes ago
中國報訊：越南女人比男人還要強悍？
台灣《蘋果日報》引述今日出刊的《聯合報》報導，在這次暴動當中，許多台商看到越南女工帶頭指揮，不僅打、砸、搶都來，甚至還有平常溫和的女工直接跳上桌跟台幹嗆聲。
有台商表示，他在越南聽過一個說法“越南男子是做大事業的，只是還沒找到大事業可做”，也因為如此，所以越南男人每天最重要的事情就是騎車載老婆上班，接著就去喝咖啡了。
China News: Viet Nam women than men also toughness?
Taiwan’s Apple Daily quoted the United Daily News reported today that, during the riots, many Taiwanese see Viet Nam Women take the lead in directing not only striking, smashing, and robbing, even normally mild women jump on tables with a choking sound. Some Taiwanese businessmen have expressed his Viet Nam heard a saying “Viet Nam man is big business, just haven’t found big business can be done”, as a result, Viet Nam men are the most important things contained wives go to work by bike every day, then go for coffee. (Translated by Bing)

A South China Sea stand-off has domestic repercussions for Vietnam

UNTIL this month relations between Vietnam and China seemed only to be improving. Business deals were being done and trade was humming. The Communist neighbours were discussing the possibility that they might jointly prospect for oil in the South China Sea, where they have long disagreed over conflicting territorial claims.

But the calculus changed abruptly when China National Offshore Oil Corporation towed a $1 billion oil rig into waters just 120 nautical miles (220 kilometres) off central Vietnam’s coast. China announced that the hulking structure would stay put until the middle of August. To make that perfectly clear, it sent a flotilla of ships, which Vietnam says included armed vessels. This is all taking place not far from the Paracel islands, which China seized from the American-backed South Vietnamese regime in 1974.
…
Also on May 11th an unusually large demonstration against China took place in Hanoi; similar demonstrations happened in other big cities.
…

Yet domestic anger may prove hotter than the government is hoping for. On May 14th as many as 20,000 workers protested against China by setting fire to 15 factories in industrial parks outside Ho Chi Minh City, the country’s business hub. Chinese companies seem to have been the target, but Taiwanese and South Korean factories also found themselves caught up in the arson. As The Economist went to press, reports were emerging of injuries and at least one death at a Taiwanese steel plant in central Vietnam.

Whose is right and who is wrong? The oil rig is inside Vietnam’s 200 nautical miles territorial economic zone. BUT China owns the Paracel islands and the oil rig is inside the Paracel Island’s 200 nautical miles zone. To make matters worst Vietnam claims the Paracel Islands belong to them. I think the solution is to grab both their heads and knock them together. Why can’t they negotiate and share the oil.?

The Singapore Ministry of Foreign Affairs (MFA) has issued a strong statement to the Vietnamese government over the burning of a Singapore flag during a protest in Vietnam.

According to an MFA statement, the flag was burnt by protesters in the Vietnam-Singapore Industrial Park (VSIP) in Binh Duong on 13 May.

Local media reports say that the protesters may have mistaken the Singapore flag for the flag of China.

The MFA spokesperson said: “This is a serious incident.  The flag is a sacred national symbol and should be treated with respect.”

The Singapore embassy in Hanoi also urged the Vietnamese government to ensure that such an incident would not be repeated.

about an hour ago
据报导，越南中部省分河静省周三晚爆发反中示威暴动，超过20人死亡，其中16名死者疑似为华人。而当地华人也爆发逃难潮，数百人逃往柬埔寨。
河静总医院医师周四早接受路透记者电话访问时表示：“周三晚有约100人被送来医院，许多人是华人，周四早有更多人被送来医院。”该名医生表示，目前已有5名越南工人以及16名疑似华人死亡。
It has been reported that Viet Nam River in central province quiet protest riots in the province on Wednesday night against the outbreak, more than 20 people were killed, including 16 dead as suspected Chinese.
And the local Chinese fleeing the outbreak surges, hundreds of people to flee to Cambodia. River static general hospital doctors told Reuters in a telephone interview on Thursday morning said: “on Wednesday night, about 100 people were taken to hospital, many of them ethnic Chinese, more people were sent to hospital on Thursday morning. “The doctors said, there are now 5 Viet Nam suspected Chinese workers and 16 deaths. (Translated by Bing)

More than 20 dead as anti-China riots spread in Vietnam

HANOI:More than 20 people were killed and rioters attacked Vietnam’s biggest steel plant overnight as violent anti-China protests spread to the centre of the country a day after arson and looting in the south, a doctor and newspapers said on today.

A doctor at a hospital in central Ha Tinh province said five Vietnamese workers and 16 other people described as Chinese were killed in the rioting, one of the worst breakdowns in Sino-Vietnamese relations since the neighbours fought a brief border war in 1979.

Hundreds of Chinese had fled Vietnam, either by air or by crossing into neighbouring Cambodia, reports said.

May 15 (Reuters) – Rioters in Vietnam attacked and set ablaze a huge steel plant belonging to Formosa Plastics Group, the Taiwan company said on Thursday, the latest facility to be targeted over mounting tension with mainland China.

Thousands of Vietnamese set fire to foreign factories and rampaged through industrial zones in the south of the country in an angry reaction to Chinese oil drilling in a part of the South China Sea claimed by Vietnam.

One Chinese worker died and 90 others were injured in Wednesday’s attack, Formosa Plastics, which is Taiwan’s largest investor in Vietnam, said in a statement.
…

Hundreds of the plant’s Vietnamese workers provoked Chinese colleagues and attacked them before setting fire to the manufacturing facilities, the company said in the statement.

The looters were driven away late on Wednesday, it said, adding that the province’s chief held an emergency meeting with police after he arrived at the site at 10 p.m.

Taiwanese media said rioters attacked a huge steel plant in Ha Tinh province owned by Formosa Plastics Group, Taiwan’s biggest investor in Vietnam. When completed in 2020, it will be Southeast Asia’s largest steel plant and will include a seaport and a 2,150 MW power plant. Local media in Vietnam has said the complex could cost about US$20 billion.

An employee (L) of a Chinese company raises her hands while trying to stop protesters in Binh Duong province May 14, 2014. REUTERS/CDVN

HANOI/MANILA (Reuters) – Thousands of Vietnamese set fire to foreign factories and rampaged in industrial zones in the south of the country in an angry reaction to Chinese oil drilling in a part of the South China Sea claimed by Vietnam, officials said on Wednesday.

The brunt of Tuesday’s violence, one of the worst breakdowns in Sino-Vietnamese relations since the neighbours fought a brief border war in 1979, appears to have been borne by Taiwanese firms in the zones in Binh Duong and Dong Nai provinces that were mistaken for Chinese-owned companies.

A police official in Binh Duong province, speaking by telephone, said about 200 people had been arrested.
…

Photographs posted on social media sites and blogs, purportedly of the aftermath of the violence, showed blackened shipping containers, smashed windows and several burnt out vehicles that had been overturned.

Some Taiwanese firms had spray-painted messages on the road and across their gates saying “We Support Vietnam” in an effort to distinguish themselves from Chinese enterprises.

about an hour ago 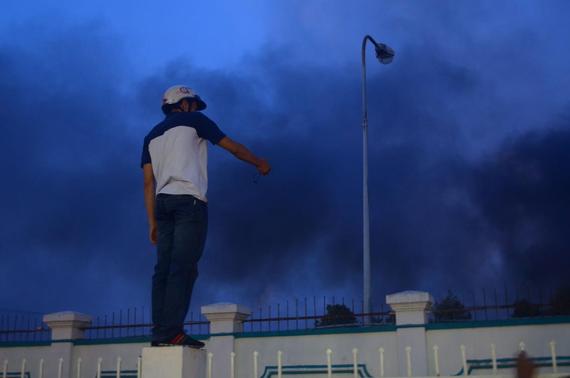 A man stands on a wall to watch smoke from a damaged Chinese owned shoe factory in Vietnam’s southern Binh Duong province May 14, 2014.

(Reuters) – Thousands of Vietnamese set fire to foreign factories and rampaged in industrial zones in the south of the country in an angry reaction to Chinese oil drilling in a part of the South China Sea claimed by Vietnam, officials said on Wednesday.

The brunt of Tuesday’s violence, one of the worst breakdowns in Sino-Vietnamese relations since the neighbors fought a brief border war in 1979, appears to have been borne by Taiwanese firms in the zones in Binh Duong and Dong Nai provinces that were mistaken for Chinese-owned companies.

Like Loading...
This entry was posted in Uncategorized and tagged anti-China riots in China, China drills for oil in sea claimed by Vietnam. Bookmark the permalink.