Visiting China, the land of my ancestors (2)

My earlier Post on my China visit tends to hang, so I have now left that unattended. Instead, I have created a second Post, which is what you are now reading.

For the earlier Post, go to  Visiting China, the land of my ancestors (1)

Something we did not enjoy was being ‘persuaded’ by our tourist guide to spend at the places (factories!) we were taken to. At one point, we were reminded that if we didn’t spend enough, she would received a demerit! We were never scolded but it was still an unpleasant experience.

Well, this tourist guide got filmed scolding tourists for not spending enough! 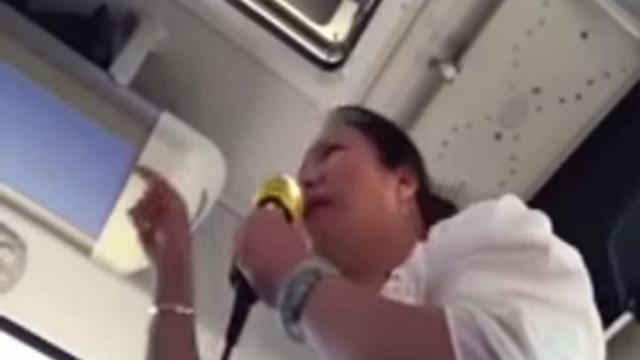 YUNNAN – A female tour guide from Kunming was sacked after a video of her castigating members of her tour group for not shopping enough went viral.

The four-minute video, which was uploaded on YouTube on May 1, showed the woman with a microphone on board a bus as she accused the group of lacking “morals” and “a conscience”.

She also threatened to cancel the group’s next trip and forfeit their return tickets if they did not spend at least 3,000 yuan (S$644) each on jewellery or souvenirs.
…

It also reported that such practices are common across the country.

IT HAD OCCURRED TO ME THAT CLIMBING THE GREAT WALL OF CHINA IS A RISKY ADVENTURE, ESPECIALLY WHEN THE PLACE IS CROWDED, WITH THOSE COMING DOWN AT THREE TIMES THE SPEED OF THOSE CLIMBING UP.

Still, this tragic news was unexpected… 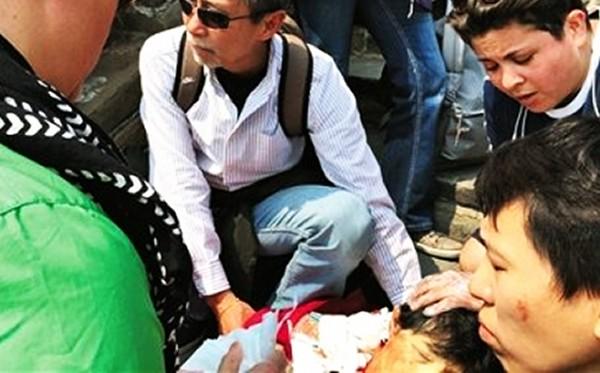 Canadian tourist accidentally kills woman at Great wall of China after knocking into her http://goo.gl/wlB0uO 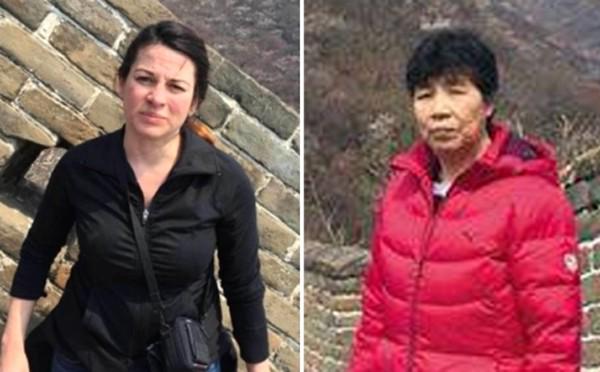 A 38-year-old Canadian tourist, known only as last name Fortin, has allegedly accidentally killed a Chinese woman, 73, after knocking into her in Beijing, China.

According to South China Morning Post, Fortin knocked the elderly woman, surnamed Cui, to the ground while she was rushing down a flight of stairs at the Great Wall of China on Wednesday (Apr 8).

Police ruled it an accident after a preliminary investigation, although a further investigation was underway, according to a police statement posted on the official microblog of the Huairou district government.

According to Global News, the victim’s husband told local media that the Canadian was chasing someone down the stairs when she collided with his wife.

“The foreigner was moving really fast. She was chasing [someone] and laughing and wanted to go between me and my wife,” he said.

Reports say the woman was immediately knocked unconscious after striking her head on a corner of the wall and stopped breathing soon afterwards.

I CLIMBED THE GREAT WALL OF CHINA, AND SO DID RACHEL, MY 2 YEAR OLD GRAND DAUGHTER…

This part of the Great Wall is in Badaling, Beijing.

Here is Rachel, all ready to climb the Great Wall.

Actually, Rachel took only a few steps up but they were such steep steps and she was so tired that I decided to carry her up for several flights…and then, it was just too difficult and dangerous carrying her up, so I stopped.

See how steep the climb is! I couldn’t risk her safety.

We sat and waited.

Rachel’s older brother, Josiah, only 4 years old, climbed as far up as his parents and came down with them, on his own legs!

The rickshaw is the most popular form of transportation for tourists in Beijing’s hutongs. It’s not as if you had much choice. It’s either travel by rickshaw or by Bus No. 11 (which means your legs!)

My wife and I took a ride in a rickshaw in one of Beijing’s hutongs when we were there.

Rickshaw is the most popular form of transportation for tourists in Beijing’s hutongs. It not only provides a unique view of Beijing’s traditional architecture and lifestyle, but also allows the rickshaw puller to tell the stories of old Beijing.

Every morning at 7 am, 46-year-old Cao Junlai leaves his rented home on his rickshaw to join the rest of the team at Shichahai.The first job of his day is to his vehicle, and inflate the tires. For the next 11 hours, approaching visitors and showing them around the hutongs in the area is his work.

Cao came to Beijing in 2005 after he lost his job in his hometown, Beijing’s neighboring Henan province. Confident with his English, Cao became a rickshaw driver at the popular Shichahai scenic area.

Shichahai is famous for its bar streets by the lakeside, where many local residents still live in traditional courtyard-style houses.

Pulling a rickshaw is not as fun as sitting on one. Cao often misses lunch when he is busy, and the job gets tougher in Beijing’s biting winter cold and midsummer heat.

Still, Cao is happy with his job. He is satisfied with the monthly 4,000 to 5,000 yuan ($650-815) he earns, and the opportunities to being able to practice his English with foreign tourists.

Tiananmen Square is a large city square in the center of Beijing, named after the Tiananmen Gate (Gate of Heavenly Peace) located to its North, separating it from the Forbidden City.

We walked on Tienanmen Square. It was quite free of litter.

110,000 Chinese show their love for China at National Flag Day at Tiananmen Square, Beijing but leave behind 5 tons of litter.

It’s simple, really: to be a good Chinese, you have to be four things: love China, work hard, know your place in society, and be “Chinese”.

Arguably, that last one can cover all of those points – how can one be “Chinese” and not love China? – but it needs to be stated separated from the rest because China isn’t just a country of laws and regulations, but of long-standing culture and customs.
…

So when National Day rolls around again and 110,000 Chinese perform their patriotic duty by travelling to Tian’anmen Square to China and brave the rain to witness the raising of the national flag at dawn, it’s for love of country. Chinese love China…

And so when these Chinese visitors leave a documented enormous amount of litter, it’s not because they don’t love China…they have fulfilled one of the obligations of being a good Chinese, other responsibilities they should perform are not important – like respecting the environment of one of the most important national institutions of China.

West Lake or Xī Hú (Chinese: 西湖; literally “West Lake”) is a freshwater lake located in the historic area of Hangzhou, the capital of Zhejiang province in eastern China.
(http://en.wikipedia.org/wiki/West_Lake)

WE VISITED WEST LAKE AND WATCHED THE SHOW, IMPRESSION WEST LAKE,  AT NIGHT.

Walking in water, this man looks for some comfort under a flooded pavilion by the overflowing West Lake after Typhoon Fitow hit Hangzhou, Zhejiang province in China today. Four people were killed and hundreds of thousands evacuated as the typhoon also forced the closing of ports and airports. – Reuters, October 8, 2013

As the sun sets, the lake is a picture of serenity.

The highlight of West Lake at night was the perfomance, Impression West Lake.. The show we saw centered The Romance of the Butterfly Lovers.

OF SILK VESTS USED AS ARMOUR AGAINST ARROWS

Genghis Khan was once said to have issued all his horsemen with silk vests, as an arrow hitting silk does not break it but ends up embedded in the flesh wrapped in silk, allowing the arrow to be removed by gently teasing the silk open, as opposed to the usual method of removing barbed arrows, cutting them out or pushing them right through an injured limb and out of the other side. These silk vests functioned much like the padded armour used by European and Byzantine soldiers of the era, such as the gambeson, a padded defensive jacket.

Posters and pictures at a silk factory in Beijing.

I HAD WRITTEN ABOUT PLACES IN CHINA THAT STANK OF URINE, AND OF PEOPLE WHO URINATED EVERYWHERE…

Watch the video below…

Overall, the situation shown in the 6-minute long video was more or less: On the Shanghai Line 3 Metro, a young couple holding their infant had urinated in the subway train car as it pleased, getting on a nearby passenger, causing a dispute between the two parties, with the young man wildly cursing “motherfucker“, and even flying kicking the female passenger he was arguing with. His actions incited condemnation from the majority of the people in the subway train car who believed that it is uncivilized to simply urinate where one pleases in the subway, even for a baby.

I HAD COMPLAINED ABOUT THE STINKING TOILETS IN CHINA.

The photo below has Chinese words which means, in a nutshell, SHOOT STRAIGHT!

That is a urinal in a museum.

The Chinese in China, it seems, can’t shoot straight!

Chinese toilet discipline can be notoriously wayward, with pictures of people defecating in public sometimes appearing on weibo.

Spending a penny could cost $16 in Chinese city

AFP News – People with a poor aim are to be fined if they miss their mark when using public toilets in a Chinese city. (AFP Photo)

People with a poor aim are to be fined if they miss their mark when using public toilets in a Chinese city, officials said — provoking online derision over how the rule will be enforced.

The penalty will apply to those who urinate outside the bowl of facilities in Shenzhen, the southern boom town neighbouring Hong Kong, although draft regulations seen by AFP did not specify a minimum quantity of spillage required to be classed as a violation.

“Such uncouth use of a public toilet will be fined 100 yuan ($16) by authorities” from next month, a city government official told AFP on Tuesday.

Users of China’s rumbustious weibo social networks poured scorn on the measures, raising the prospect of hordes of toilet inspectors being deployed to inspect performance.

“A number of new civil servant positions will be created. There will be a supervisor behind every urinating person to see whether the pee is straight,” wrote one poster.

Another added: “Very good measures. I expect they can create 20 jobs on average for every public toilet.”

2 Responses to Visiting China, the land of my ancestors (2)