The principal of SM Alam Megah in Section 27 Shah Alam had apparently told noisy non-Malay students to go back to their native land during the school assembly last Monday.

The parents are afraid to lodge police reports over the issue as it may affect their children’s future.

“We are patriotic and loyal Malaysian citizens and Malaysia is our home. Where else can we ‘balik’ to?”  former Deputy Education Minister Datuk Dr Wee Ka Siong asked.

Principal apologises to students during assembly

The SK Alam Megah principal who told students to “balik India dan China” (return to India and China) apologised to the students during assembly today.

Confirming this, Shah Alam MIC deputy division chief A Prakash Rao said he was informed of the apology by some who were present at the school at the time.

“I was informed she apologised during assembly, as she had promised to me when we met her, in the presence of a state education department (PPD) officer.

“Some parents were also in the school compound then,” he said when contacted.

He said that it is now up to the Education Ministry to decide whether to take action against the principal.

According to a journalist who covered Yati’s public apology, the principal appealed for forgiveness as she said “no one is free from mistakes”.

“Here, I ask for forgiveness if I had made any mistakes throughout my time leading the school… especially over what happened last week where students were singing patriotic songs and at the time I made a reprimand which may have offended the sensitivities of certain parties.

“My intention (to reprimand the students) were to advise all students, regardless of race, to be patriotic Malaysians.

“Like the saying di mana bumi dipajak, di situlah langit dijunjung (respect the culture of the community you are in),” a tearful Yati (right) said.

She also told the students that forgiveness is a good way to ensure the coming days will be better.

“As headmistress of this school, I am proud of all my students and I love you all.”

Principal apologises to students during assembly

He pointed out that the principal justified her remarks by saying that she had not only aimed the remark at Indian and Chinese pupils but also Malays, whom she said had told to “balik Indonesia” as well.

“However, the students and parents contradict this version of events, claiming the “balik Indonesia” announcement was never made,” said the former deputy education minister.

The MCA Youth has dismissed the apology of a Shah Alam school principal who allegedly admonished noisy students by telling them to “balik India dan China”, pointing out that it builds a seemingly intolerant and zealot image of Malaysia.

MCA Youth chief Datuk Dr Wee Ka Siong said although the apology came quickly from the Sekolah Menengah Alam Megah principal, it was “insincere” and reeked of a cover-up and said disciplinary action should be taken against the principal.

“The incident alone reflected our country poorly, but her apology even more so builds a seemingly intolerant and zealot image of Malaysia,” he said in a statement in Kuala Lumpur today. 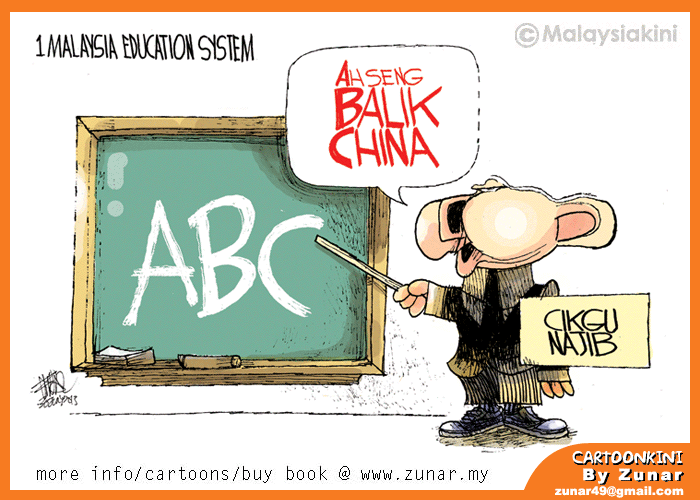 Shah Alam MIC deputy division chief A Prakash Rao, “She has promised to meet the students at an assembly on Friday to apologise to them.”

The principal of SMK Alam Megah in Shah Alam is said to have admitted that she told Indian and Chinese students to ‘return to India and China’ during a school assembly two days ago.

In saying this today, Shah Alam MIC deputy division chief A Prakash Rao (left) said the principal has apologised for her remarks, while also claiming she had told Malay students to ‘return to Indonesia’.

“She has promised to meet the students at an assembly on Friday to apologise to them,” Prakash said after meeting the principal and other school officials for nearly an hour this morning.

The principal apparently made the remarks because students were being noisy while the national anthem was being sung.

“She said that she shouldn’t have made those remarks and that it was in the heat of the moment,” Prakash said.

Malaysiakini was unable to verify Prakash’s claims because the principal has declined to meet with the media or to comment on the issue.

In spite of the apology, Prakash urged the Education Ministry to take the “necessary action” against the principal.

Deputy Education Minister II P Kamalanathan had earlier said that action will be taken if the matter is proven true.

Prakash revealed that district education officials have already visited the school to investigate the complaint.
…

Tamil Youth Club of Malaysia president K Murali had a clearer suggestion as to the action that should be taken.

“It’s either a transfer or a dismissal. Nothing less,” he said, after accompanying Prakash into the school.

Another school head accused of being racist

MCA Youth is calling for stern action to be taken against a school principal who allegedly rebuked her noisy students by telling them to “balik India dan China”.

MCA Youth Education bureau chairman Chong Sin Woon, said that if it was found that the principal of SM Alam Megah in Shah Alam was favouring one group over another, she was not fit for the profession and should also apologise to the affected students.

“Balik India dan China” is not subtle in any way. Did the principal believe her slurs would go unnoticed?” he asked.

Chong said that racial slur incidents in schools kept occuring as the punishment for wrongdoers was not harsh enough.
…

Commenting on the issue, former Deputy Education Minister Datuk Dr Wee Ka Siong said in a statement that the recurring trend of targeting students who are not of the same ethnicity was disappointing.

“We are patriotic and loyal Malaysian citizens and Malaysia is our home. Where else can we ‘balik’ to?” Wee asked. – July 3, 2013.

In a text message to Malaysiakini, he said that the matter had come to the ministry‘s attention and an immediate investigation would be initiated.

“We do not condone such behaviour… If the allegation is true, then action would be taken (against the principal),” he added.

Kamalanathan was responding to Shah Alam MIC deputy division chief A Prakash Rao, who claimed that parents had complained to him about the incident.

Prakash said the principal of SMK Alam Megah had berated her Chinese and Indian students, telling them to “balik India dan China” (go back to India and China).

‘Go back to India or China’

Another school principal has caused racial tension in allegedly asking the non-Malay students to go back to India or China.

PETALING JAYA: Barely a week after the headmaster of SK Seri Pristana in Sungai Buloh came under fire for instructing his non-Malay students to have their recess meals in a changing room, another secondary school principal has allegedly raised racial tension.

This time it is alleged that the headmistress told non-Malay students to go back to India or China.

The principal of SM Alam Megah in Section 27 Shah Alam had apparently told noisy non-Malay students to go back to their native land during the school assembly last Monday.

Shah Alam MIC division deputy chairman A Prakash Rao who brought the incident to FMT’s attention said he had received numerous complaints from parents over the issue.

He also requested the Education Ministry to conduct an investigation over the issue which irked the Chinese and Indian parents.

Prakash Rao said that he was shocked to hear parents claiming the secondary school principal had used such insensitive language on students.
…

“We are still not sure whether the allegation is true or not. Thus, MIC urges the Education Ministry to a do  a thorough investigation of the matter.

“If the incident really happened, then the principal must be punished for creating racial tension,” Prakash Rao said.

Coming hot on the heels of the shower room canteen imbroglio is another allegation that a principal of a secondary school in Shah Alam hurled racial abuses at her students.

It is claimed that the principal told her Chinese and Indian students to return to their respective ancestral lands.

“Based on the complaints I received from the parents, the principal was furious because the students were making a racket during her speech.

“She then scolded all the students but later targeted the Chinese and Indian students, telling them to ‘Balik India dan China‘ (Go back to India and China),” he told Malaysiakini.

Prakash said that the students then informed their parents, who later brought it to his attention.

In an attempt to verify the allegation, the MIC leader led a delegation to the school this morning but the principal was on leave.

IS THIS THE SCHOOL?

Sekolah Menengah Kebangsaan Alam Megah (SMKAM) or SMK Alam Megah is a public national secondary school located at Seksyen 27, Shah Alam. The school began its schooling session on December 1, 1993 with 145 students and 6 teachers. The total number of students of SMK Alam Megah this year is 1378 students including Form 6 students. The school prioritizes its current objective which is to emerge as one of the leading schools in Petaling Perdana by this year. Puan Hajah Miss Yati binti Dani has became the school’s principal from the year 2007 until now.

Like Loading...
This entry was posted in Uncategorized and tagged education, Go back to India or China, malaysia, principal of SM Alam Megah in Section 27 Shah Alam, race, Shah Alam MIC division deputy chairman A Prakash Rao. Bookmark the permalink.