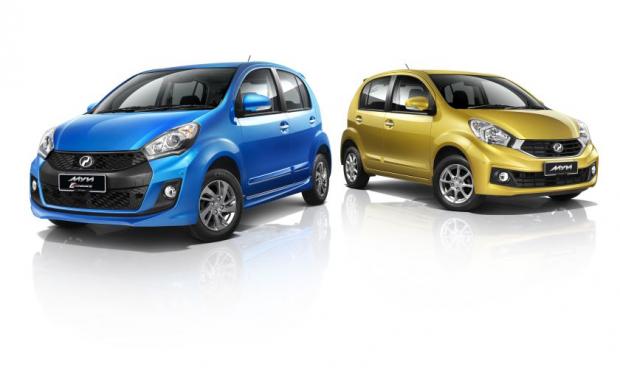 The award was on the basis of quantitative measurements, including sales volume and selling price of the model in 2014, part costs, fuel consumption and total cost of ownership over a five­-year period or about 100,000 km usage.

In a statement, President and Chief Executive Officer Datuk Aminar Rashid Salleh said the award demonstrated the company’s overall commitment to bringing the best in terms of in­built quality and value preposition.

Perodua has sold more than 830,000 units of the Myvi since its launch in 2005 and the vehicle continues to be the nation’s favourite. — Bernama

A NEW MYVI HAS ARRIVED: THE Myvi XT

All prices are on-the-road with insurance.

The XT is targeted at university students and fresh graduates which is why Perodua has also launched its “What’s Up! Graduate” scheme which offers a voucher worth RM500, a petrol card worth RM500 and a personal accident policy coverage for one year worth RM20,000 (terms and conditions apply). “We believe that the launch of the Myvi XT and the ‘What’s Up! Graduate’ scheme will be a good combo as one is made for the young and the other will assist those starting out in owning a Myvi,” said Datuk Aminar Rashid Salleh, Perodua president and CEO.

BAD NEWS IS NEWS, GOOD NEWS IS UNINTERESTING. That is why Perodua, a profit-making car manufacturer, seldom makes the news unlike Proton.

THIS TIME, HOWEVER, PERODUA MAKES THE NEWS AND IT IS GOOD NEWS FOR PERODUA. Unfortunately, it is bad news for Proton.

Malaysia’s second largest national automaker, Perodua unveiled what it calls its glocal car at the Kuala Lumpur International Motor Show and it is pretty impressive to say the least.

With the threat of a drop in foreign car prices looming ever closer, Perodua have had to step up their game in order to remain competitive and relevant to Malaysians and the car market in general. The company has done just that by revealing its next generation car called the GMS (Global Model Sedan) Buddyz at the 2013 Kuala Lumpur International Motor Show.

The GMS Buddyz is meant to appeal to both generation Y and Z, hence the name Buddyz

According to Perodua, it is meant to appeal to those of the digital age, most notably generation Y and Z. The Buddyz concept car boasts Perodua’s next generation design language. It features a low roofline and sharp curves giving the car a more aggressive presence. Despite being touted as a next generation design, the front fascia to some extent still resembles the Myvi.
…

At the same function, which was attended by 20,000 people, Najib also launched a special coffee table book chronicling Perodua’s 20-year journey and the company’s hope ahead.

RAWANG: Perusahaan Otomobil Kedua Sdn Bhd’s (Perodua) will come out with a new model next year that will be the cheapest in the market, said Prime Minister Datuk Seri Najib Razak.

He said the new model will enable the rakyat to own a car which will have sophisticated and strong safety features.
He said Perodua has invested RM1.3 billion to build a new factory which would be ready next October to produce the new model that would be competitive.
“I hope the factory will help Perodua export more cars, especially to neighbouring countries. Currently, Perodua exported 10,000 units a year and I hope the figure can be increase further,” he said at Perodua’s Gala Raya, held in conjunction with its 20th anniversary here today.
Najib said Perodua’s strategy all along has been to focus on ‘niche’ market, producing compact quality cars and to find ways to improve quality and reduce production costs.
Currently, Perodua’s ecosystem comprised vendors and dealers nationwide of 130,000, he said.
Read more: Perodua to come out with cheapest model in the market next year – Najib – Latest – New Straits Times http://www.nst.com.my/latest/perodua-to-come-out-with-cheapest-model-in-the-market-next-year-najib-1.343252?cache=03%2F7.198169%3Fpage%3D0%2F7.221445%2F7.317048%2F7.321287%2F7.321287%2F7.321287#ixzz2cw0UKAMU

The Perodua Myvi is a supermini/subcompact hatchback manufactured by Malaysian car maker Perodua since 2005. Based on the second generation Daihatsu Sirion and Toyota Passo, the Myvi is the result of Perodua’s collaboration with both Toyota and Daihatsu. The Myvi was the best selling car for 5 consecutive years in Malaysia from 2006 to 2010.

KUALA LUMPUR: Perusahaan Otomobil Kedua Sdn Bhd (Perodua) sold 96,900 vehicles in the first half of this year, up 4% from the 92,900 units it sold during the same period a year earlier, mainly due to the introduction of the S-Series variants in March.

“Sales in the second half of the year tends to be better than the first half, due to the festive season and many car companies also tend to launch a lot of new models and variants during the period to excite the market,” he said during a press conference on the company’s first half sales performance yesterday.

ARE YOU AFFECTED? ARE YOU THE OWNER OF A NEW MYVI?

PERODUA is initiating a Preventive Measure Campaign call for its 74,000 new Myvi variants produced between March 2011 and March 2012 to replace the Electronic Power Steering (EPS) column of the model.

“We apologise for the inconvenience caused to our customers but this campaign is necessary as the car’s performance may not be at its best and could partially compromise the driver’s response time at low speeds,” he said.

Based on studies conducted by Perodua, he said the problem could be detected when the EPS indicator is alight, after which, the driver could feel a slight heaviness at speeds of between 30kph and 40kph.

This can be temporarily fixed by switching off the engine and restarting the car.

“However, for a permanent fix, we kindly request that an appointment to be made at any of our 170 service centres nationwide for the replacement of the EPS column,” he said.

The company has already issued notification letters to the affected customers.

Perodua mainly produces minicars and superminis and does not have models in the same market segments as Proton. They do not design or engineer their main components such as engine and transmission in house.