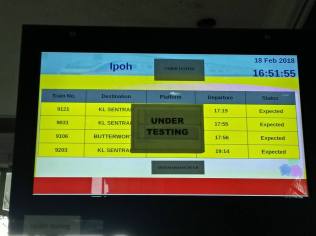 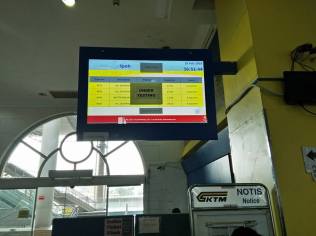 None to show when trains arrive let alone inform us how late they are.

Queue system due to break down of number-issuing machine. #MalaysiaManaBoleh? 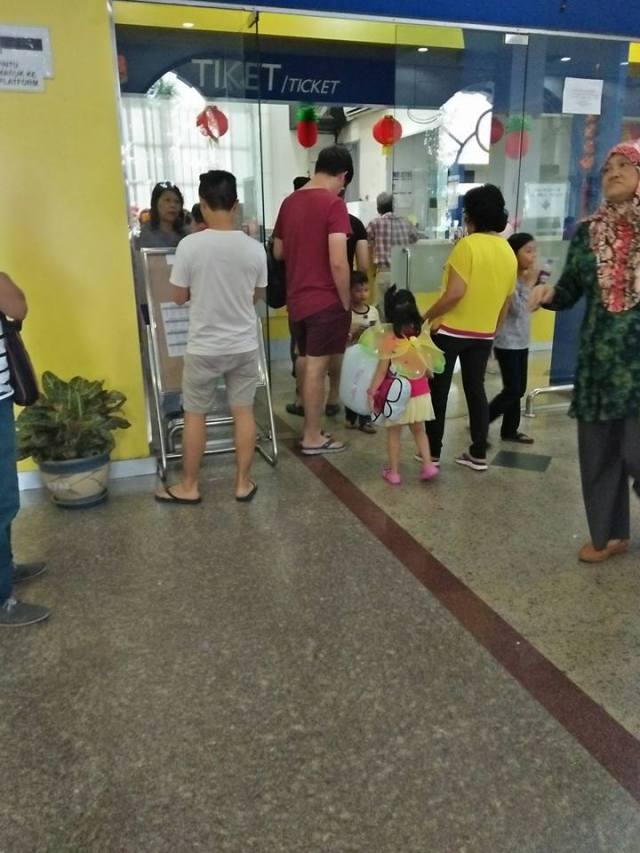 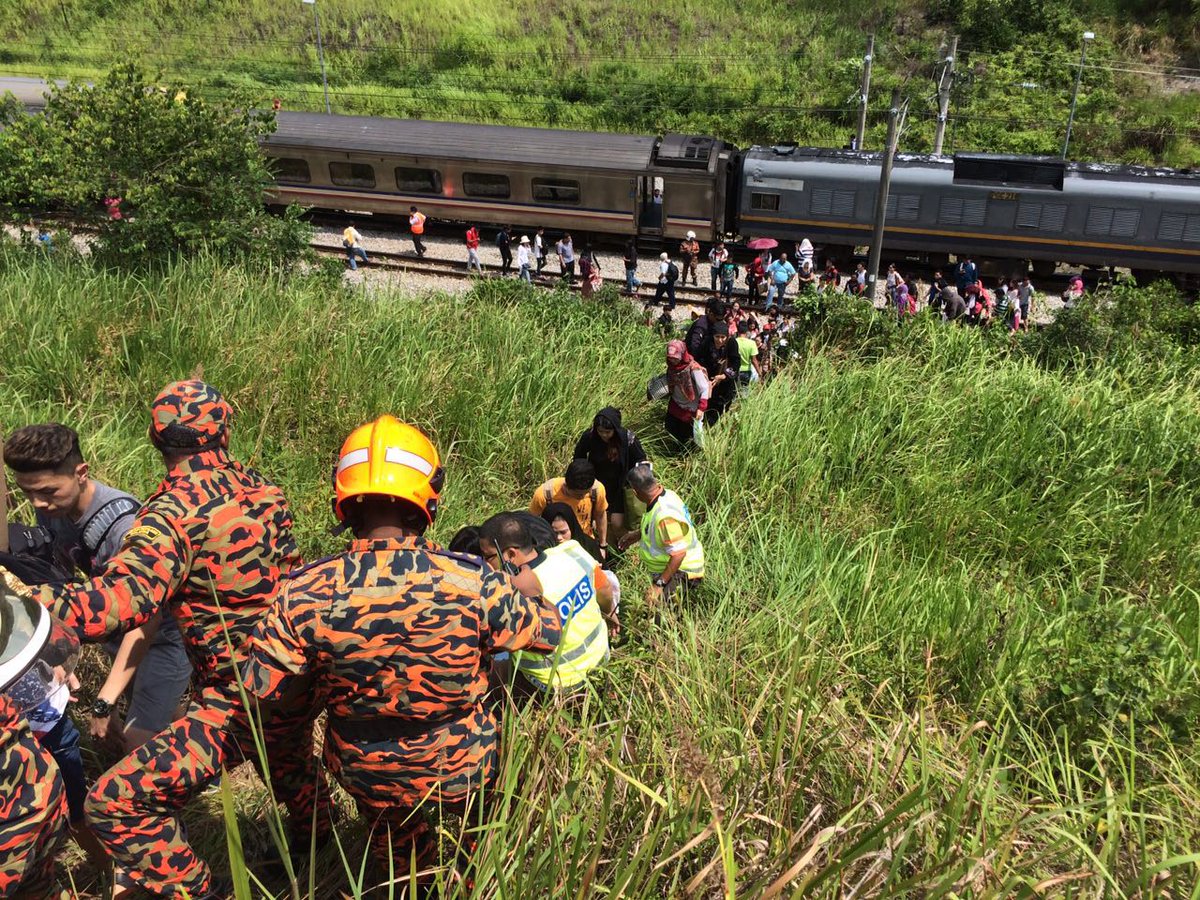 Those who will be taking the Electric Train Service (ETS) this evening and at night have been advised to contact the ETS centre at 03-2267 1200 for further information. 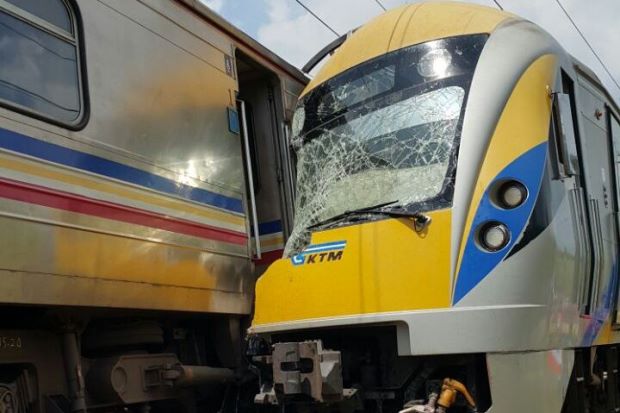 According to a passenger, the train had reached the station after travelling for about 90 minutes. The train had left KL Sentral at about 12.30pm on Saturday.

“We heard a loud bang and felt a jerk,” said The Star reporter Cecilia Kok, adding that no one was flung from their seats.

“Some passengers in the front coaches suffered minor injuries. A lady fainted,” she said. 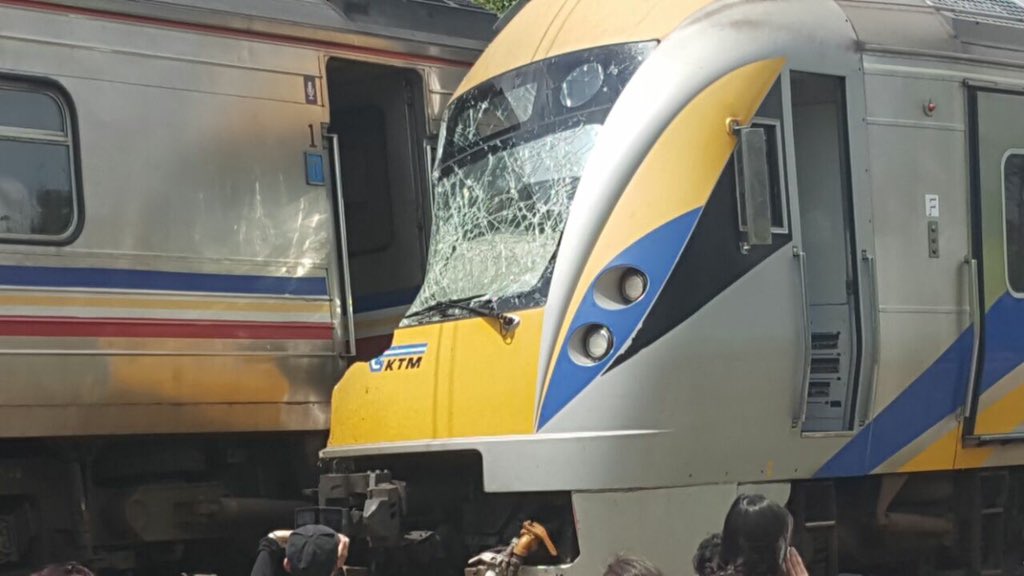 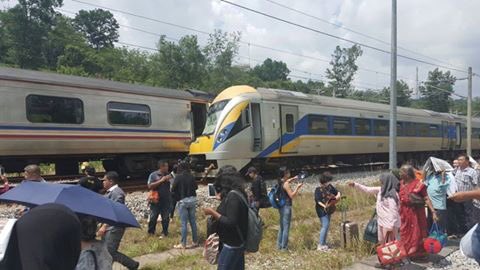 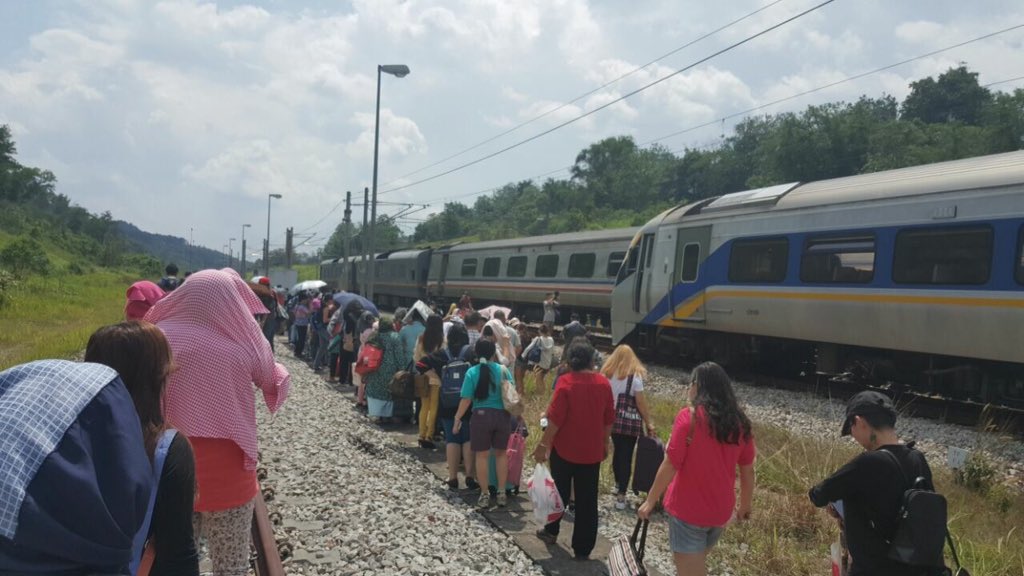 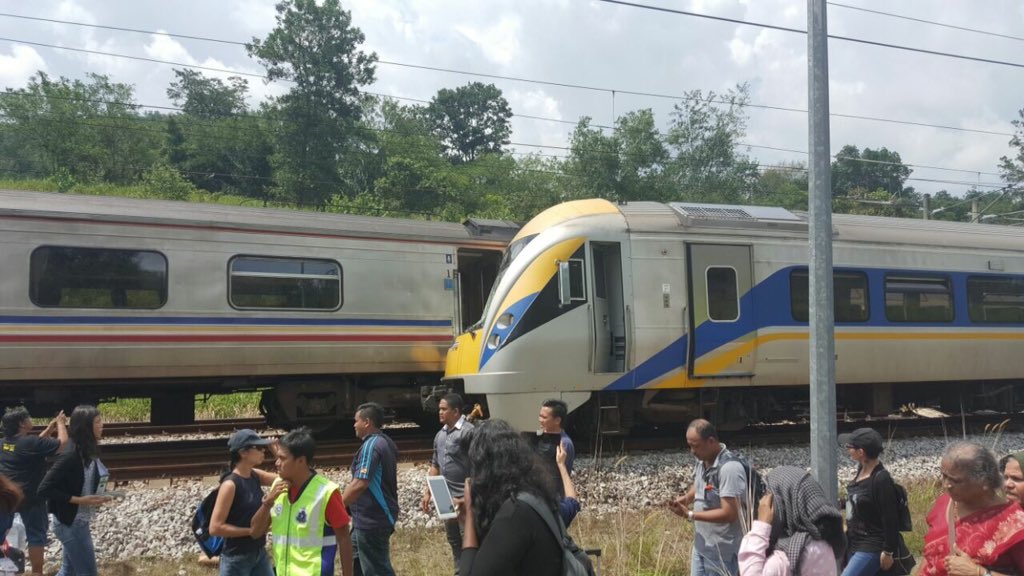 All #ETS and #Intercity ticket sales suspended from mid-May 2016…

3 MONTHS AGO, YOU COULD GET INTO THE STATION TO WAIT FOR YOUR FAMILY OR FRIENDS TO ARRIVE. 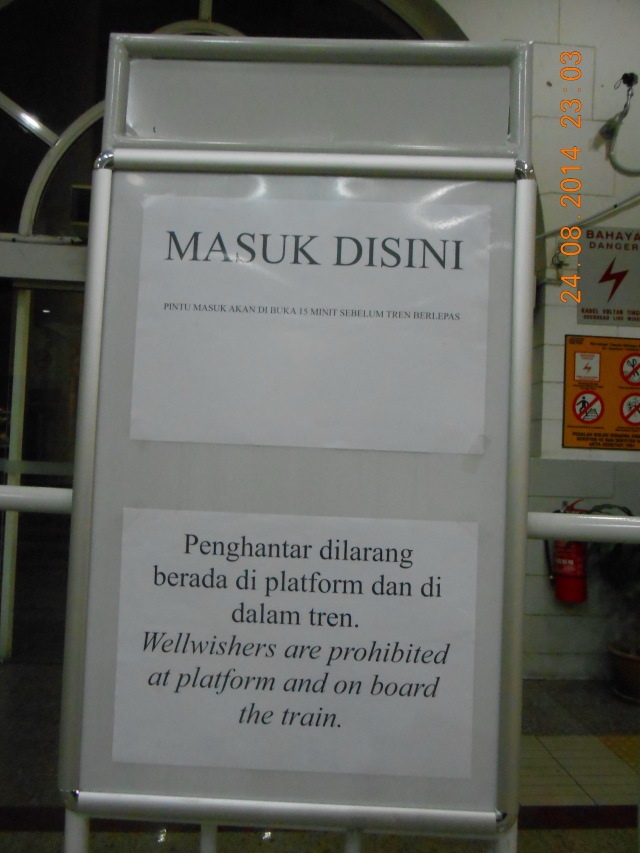 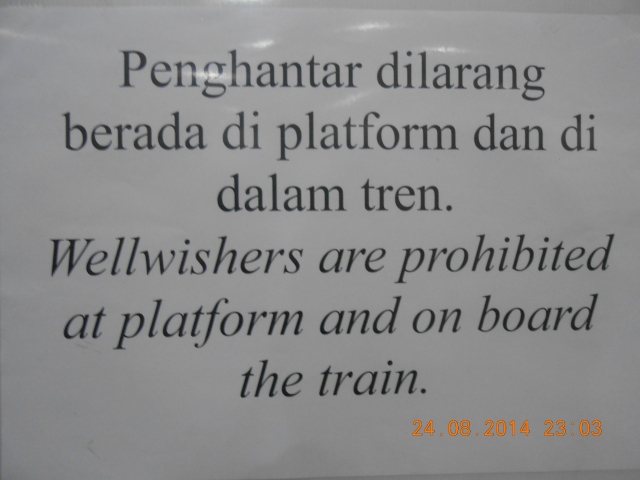 AT THE IPOH RAILWAY STATION, THERE WAS AN IMPROVEMENT.

No, it’s not that they will answer your phone call.

However, if you go there to the Ipoh railway station, it takes less time to get to the ticketing counter to buy a ticket. 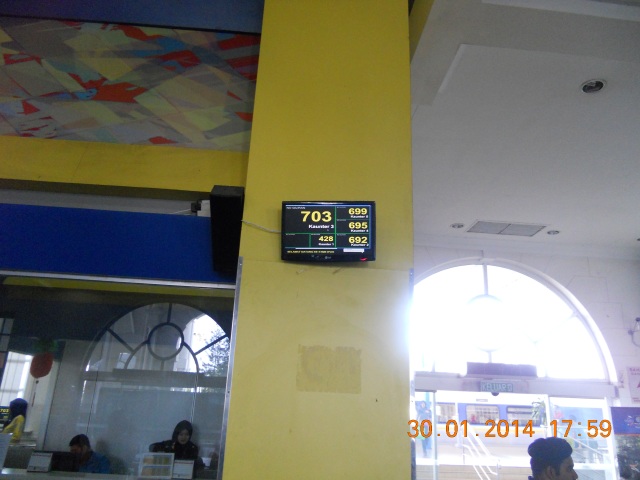 There were large notices with important information. 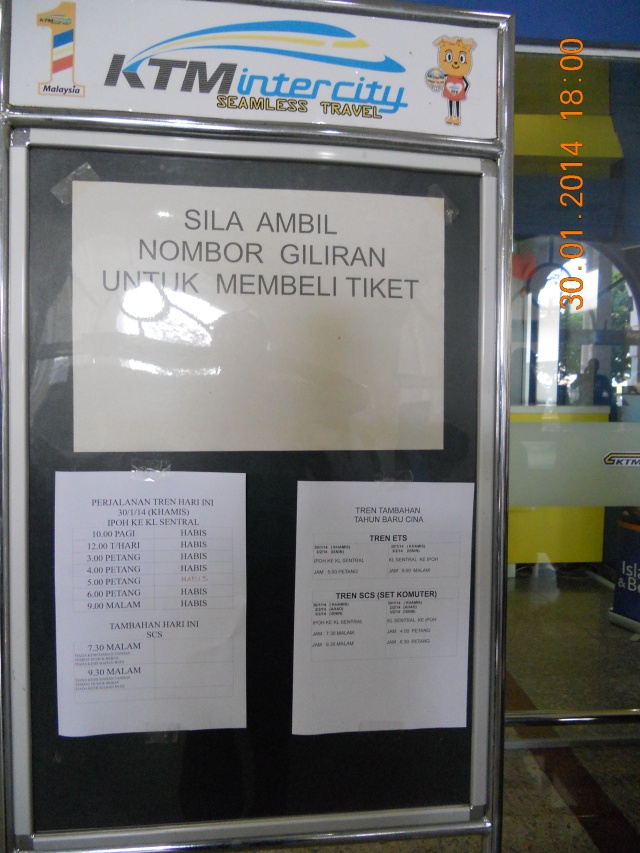 HERE WAS AN IMPORTANT NOTICE 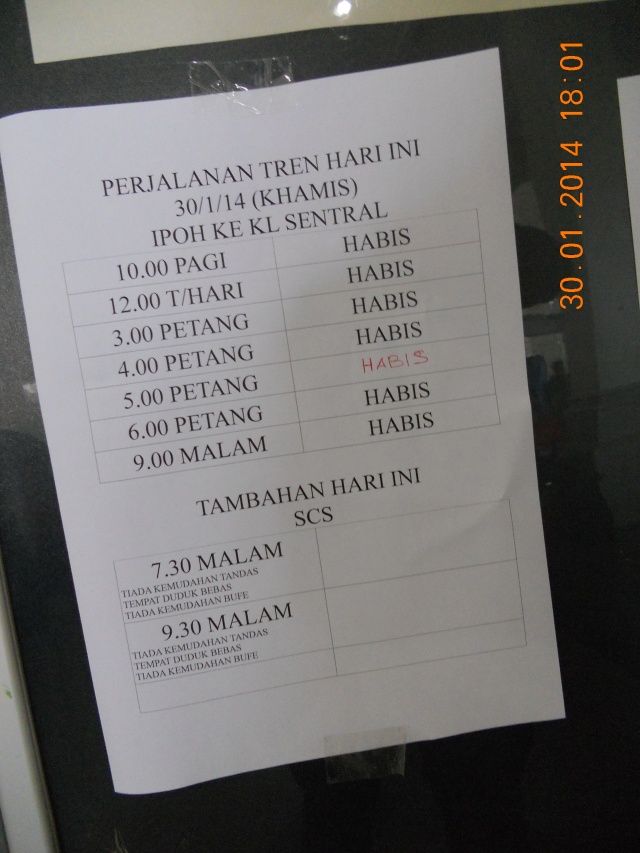 Then, it was my turn.I went into this office. 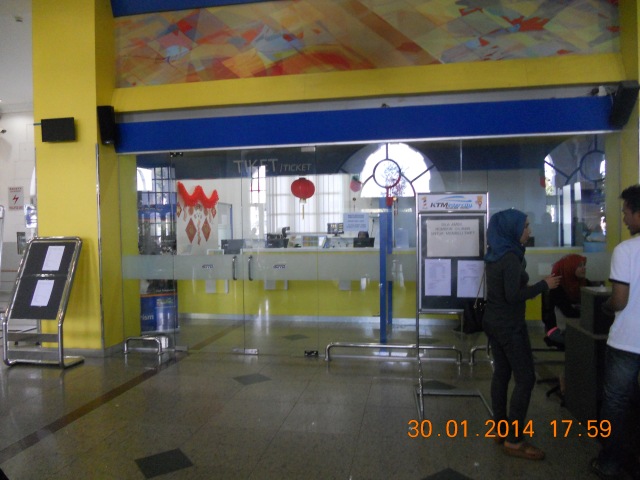 12 minutes after I had taken my number, I left, tickets purchased.

BAD NEWS ABOUT THE ETS
1. Online booking service is s**t.
2. Nobody answers the phone, especially the Ipoh office.

A: Has anybody tried to book ETS or KTM train tickets online? It must be the most un -user friendly software ever designed!!
And has anybody tried calling their call centre? After listening to their recorded messages in English and Malay, you then get cut off!!!
Aaaarrrggghhh!!!

B: Dont bother! Best you get them over the counter.

C: I tried but was never successful. Website rather confusing. Don’t ever bother calling their call center. It is a waste of time. Counter services are very friendly.

A: The website is absolutely STUPID! I wonder who they contracted to do the software! The info is so bad, cant even find out the fares. It was soooo easy for me to book train tickets or even bus tickets online in the UK! How are we going to achieve 2020? Its only 6 years away, and we are 50 years away in terms of efficiency! Counter service in KL is ok. But in Ipoh? There is always a queue of about 100 numbers!! What are they doing?????

D: welcome back to Bolehland … Sigh !

Blogger: How things change! When the ETS was introduced, it had its own tel no, and its own counter. Now, it’s part of KTM and you HAVE to go there to get tickets. It’s now like any govt dept.

Blogger: And it’s true that there are always so many people waiting for tickets and ONLY one counter open

Inside the train. Quite empty as it is the 5am train on a Monday morning! 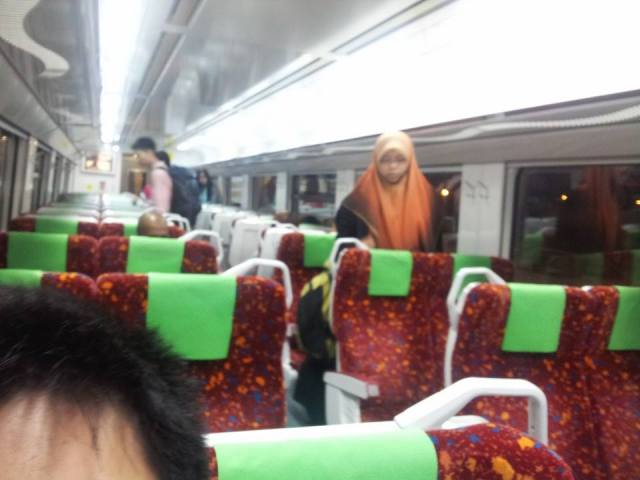 Get a drink here! 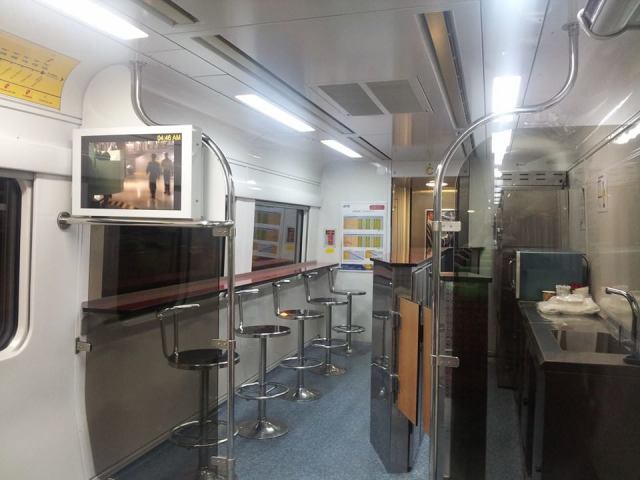 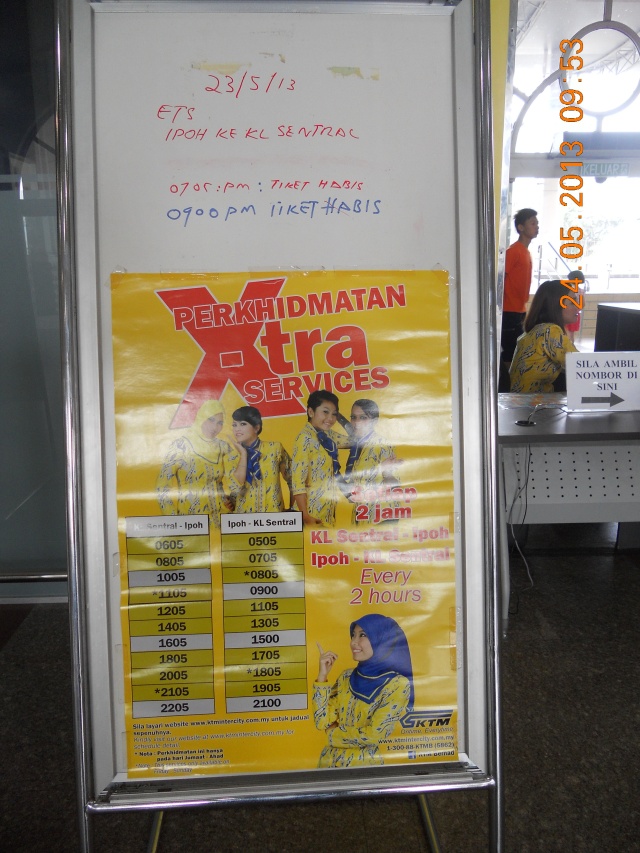 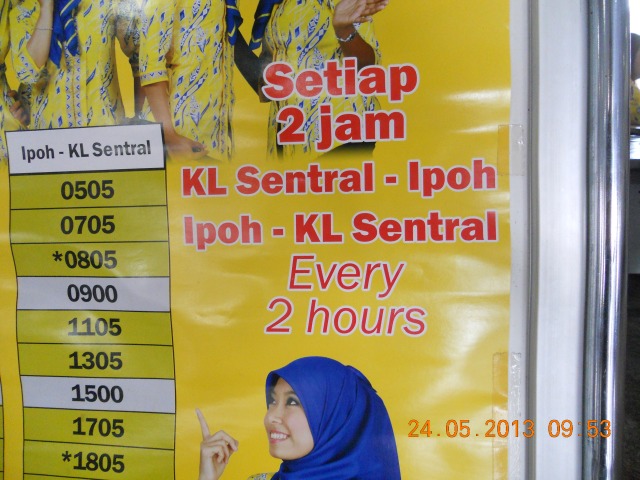 The train arrives and out come the passengers… 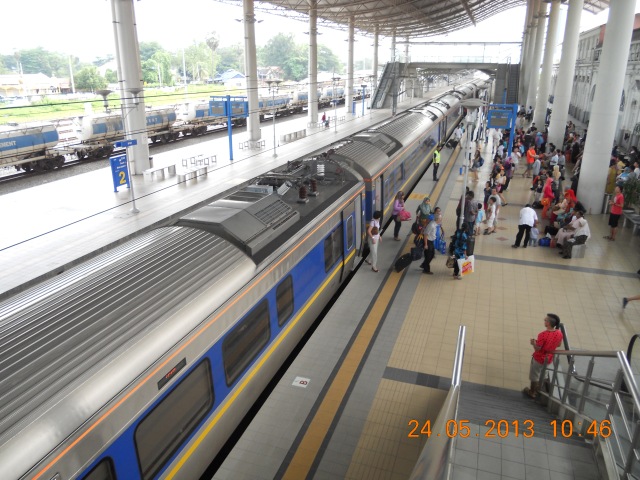 COMMENT BY A GOOD FRIEND WHO DIDN’T TAKE THE ETS! AFTER READING THEM, YOU’RE SURE TO TAKE THE ETS.

Never liked yesterday’s journey back home. I usually travel by ETS but the ticket for it is only at 8.00 pm. So the only available ticket back to Ipoh is KTM’s Express Rakyat! Will never travel on that train again. The train is at 3.50 pm. But delayed and came in at 4.05 pm. It started to move at 4.15 pm but with a terrible jerk that I heard a loud noise of the chains being pulled. Then it stopped. It only moved at 4.45 pm. Was feeling very uneasy and did send a msg to my friend regarding the situation. Told not to erase the msg until I arrive safely in Ipoh. Started to pray for everyone who was in the train heading to their destination. This train was heading to Butterworth.
…I was really shocked when I was sold the small bottle of Twister for RM4.00. Paid Rm 2.00 for the small mineral water and RM 4.00 for the Twister. These fellows selling the food on the train are unaware of the pricing I think or is that the price on the train! Made a mistake for not carrying a bottle of water with me! For me it is a BIG “NO” to travel on KTM’s Express Rakyat anymore!
jasmine.c 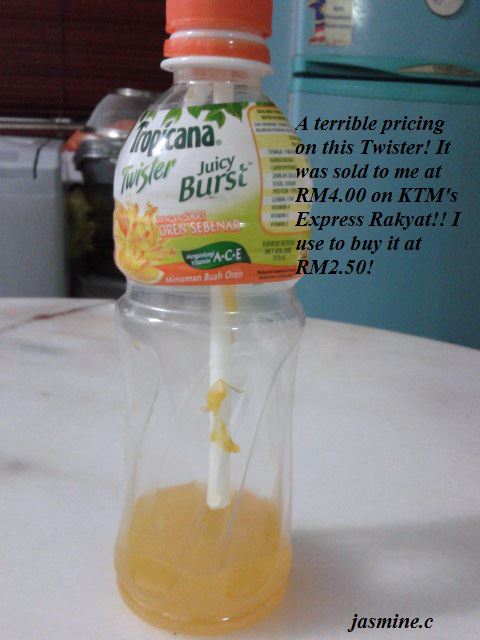 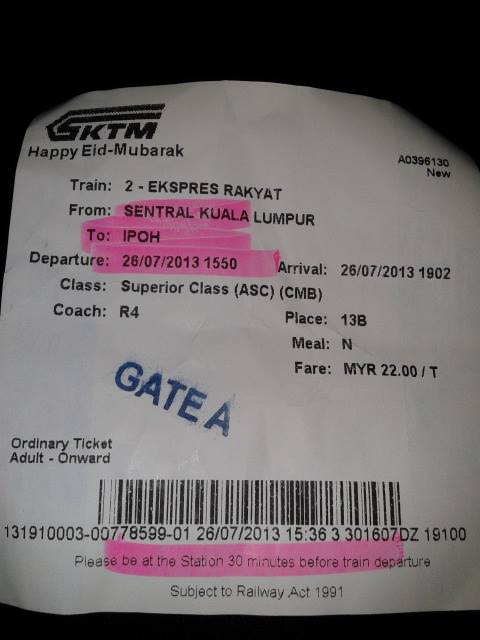 Now you know why it is better to take the ETS..

Comment by someone who took the 8am ETS from KL to Ipoh on Thursday, 8 February 2012.

Train has stopped moving somewhere between Batu Gajah and Ipoh Sentral.. 🙂 its 20 minutes delayed already vs. the scheduled arrival at 1025am.

The motto of KTM: “On time, everytime”.
It’s quite true; but I think they can shorten it by making it “Late, everytime”. Can save letters 🙂

Electric Train Service gets thumbs up

IPOH: THE Electric Train Service (ETS), which is in its third year of operation, is quietly making its way into the hearts of Ipoh folk.

People from all walks of life can be seen at the station.
…..
Overall, Streets found that most passengers were more than satisfied with the service, despite the fact that the ETS tickets are significantly more expensive than the regular Intercity Komuter service.

According to the Keretapi Tanah Melayu Bhd  2012 annual report, 1.2 million passengers used the ETS service nationwide, which was a 33.3 per cent increase from the previous year.

The report also stated that 18 services  run daily from Monday to Thursday, while 22 run from Friday to Sunday.

Letter to the Editor

Nothing to eat on ETS

ON Dec 14, 2012, I took the Electric Train Service (ETS) from Ipoh to Kuala Lumpur with my family at 6.05pm. I was told that there is a cafe on the train, so I did not buy anything from the station before boarding.

Improve service: Food and beverage are just as important as safety and comfort on the ETS. – filepicAn hour into the journey, my children began asking for food. So I asked one of the crew members if there was food for sale. I was so taken aback when he rudely told me that they had nothing left, only hot drinks were available.

Apparently, I was not the only one who had experienced this rude service by the staff on board the train. A friend of mine took the 5.05am train on Dec 2 from Ipoh to Kuala Lumpur.

As he had not had his breakfast, he went to the cafe and was surprised to see that there was no one at the counter. There was also no food and drinks available. What kind of service is KTMB giving its passengers? Please look into this problem.

TAKEN FOR A RIDE
Ipoh.

HOW MUCH IS A TICKET FROM IPOH TO KUALA LUMPUR?

ON Aug 15, I drove from Penang to board the 7am “Silver” Electric Train Service from Ipoh to Kuala Lumpur Sentral.

The train was punctual, the onboard announcement in Bahasa Malaysia and English were excellent and the ride was extremely smooth and comfortable. Throughout the journey, it felt more like an airplane ride.

There are eight services in each direction and the response appears to be overwhelming.

All trains were running full and to my surprise, there were passengers from Butterworth, Taiping and Kuala Kangsar.

The journey was made pleasant by the friendly and polite crew. I was impressed by the condition of the train, especially the toilets.

The service has created a tangible impact on the public and based on this, KTMB should purchase additional sets to increase its frequency.

It was a five-star service all the way and I would not hesitate to recommend it to all my frequent traveller friends.

Read what Jasmine C, Blogger, mediaperak.com, has to say about the ETS

0-1   Was down in KL on the 1st of July 2012.Was there for a meeting which was held in the morning till noon. After the meeting was with my daughter and her friend hanging out in Ikea and was having the meatballs that was so delicious. It was rather early for me to head back […]

TICKET TO RIDE: Complainant plans to use KTMB’s goodwill gift for a high school reunion trip in September

LIM KAH PIN’s plans to visit a friend in Ipoh went offtrack just as he was about to take the train from Kuala Lumpur on June 23.

“The ticket I bought at KL Sentral stated that the train would leave at 8am and will arrive in Ipoh at 11am,” says the 70-year-old retiree.

The ticket also clearly stated to board the train at Gate A at 7.20am.

“At 7.50am, a rail guard entered the barrier and I thought he would open the barrier for passengers to board the train soon.

“However, he was still standing there by 8.15am without taking any action.

“There were no announcements or signage to inform passengers when the train would arrive or depart.”

He says his patience finally ran out at 8.40am when Gate A remained unopened.

“When I asked the guard, I was shocked to hear that my train had left at 8am. The guard then said I should have been waiting at Gate B.”

LIM told him this was not his mistake, as the ticket had clearly stated to wait at Gate A.

“I was then told to change the ticket for the next train to Ipoh at 9am.

“It is unbelievable that such a mistake can still happen. This caused much inconvenience for myself as well as my friend, who was to pick me up me at my destination.”

LIM says he feels something should be done to improve the rail boarding system to ensure other passengers would not face the same type of inconvenience.

“We thank him for sharing his feedback with us as it helps us improve our service performance.

“As a token of appreciation for his support, KTMB has offered him a complimentary electric train service ticket and he has been informed of this.”

LIM confirms he has been contacted by KTMB personnel who apologised.

“As for the complimentary ticket, they have arranged to e-mail it to me.”

He says he plans to use it for a high school reunion trip, which will be held in September.

“I am very satisfied with the offer, but above all, I hope that this incident can be highlighted to remind others that such things can happen if they are not careful.”

You can purchase your tickets 30 days in advance.

The electric train is quick, clean and comfortable. It takes 2 hrs 20 mins to get to Ipoh from KL.

I have never been on the ETS. I have waited numerous times for people who took the electric train: sons, sister, nieces, brother-in-law, etc.

They all had good things to say. Quick. Almost always on time and if late, by 5 minutes, no more. Confortable. Cool. Cold, someone said.

I have made bookings for other people. The office actually answers the phone, unlike KTMB, the people who manage the normal railway system.

The electric train takes you to KLIA and LCCT to catch the plane. 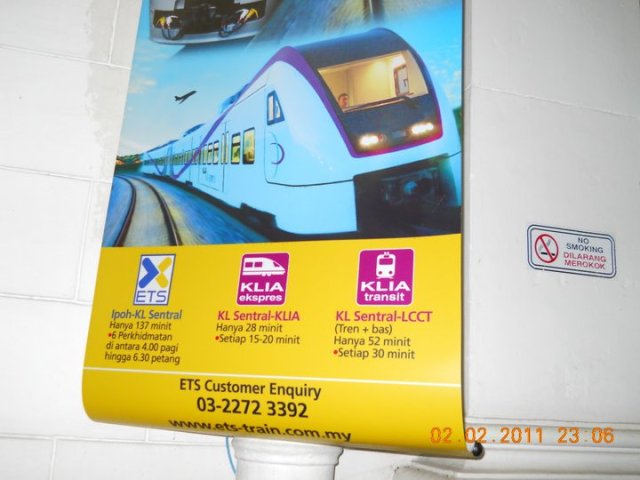 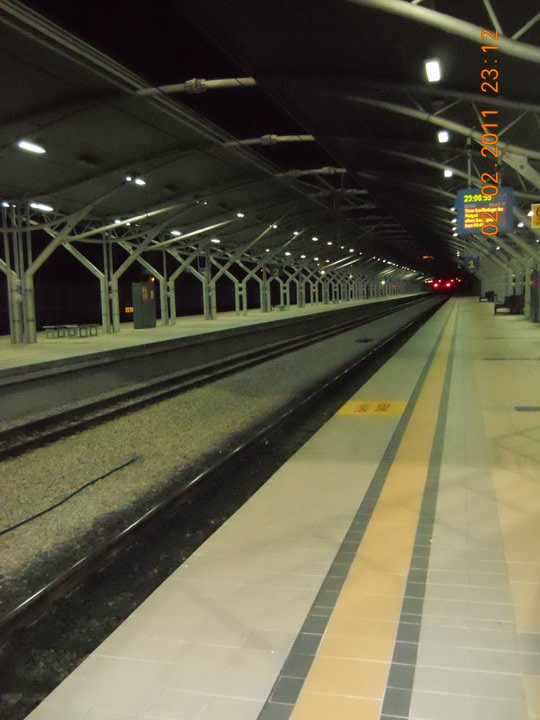 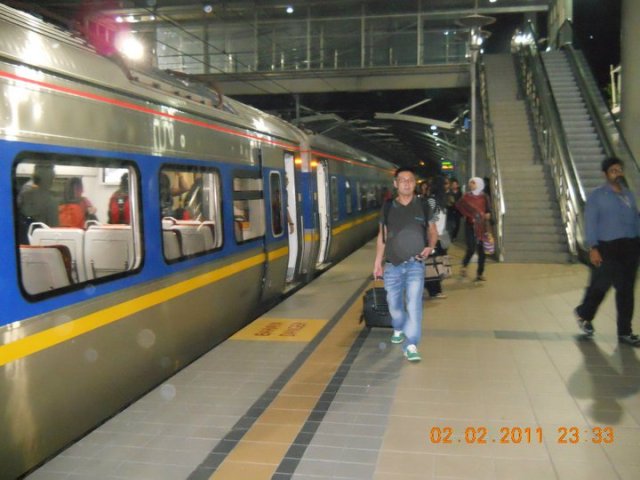 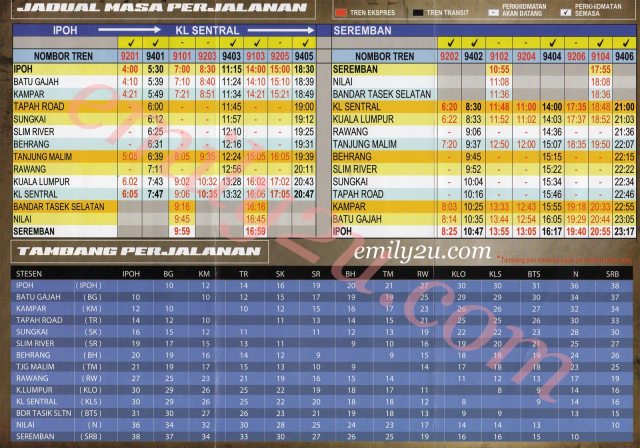