Nik Abduh: Hadi Awang immediately consented to the decision that I deny (the recording). I followed, and was happy to receive a mandate.

Nik Abduh Nik Abdul Aziz revealed that he wanted to come clean on an audio recording of him admitting to PAS receiving funds from Umno but the Islamist party’s leaders felt otherwise since the last general election was around the corner.

Therefore, the PAS central committee member said he relented since the issue was greater than him.

He also disclosed that PAS president Abdul Hadi Awang had given his blessings for a denial to be issued.

“Even though the recording was aimed at ruining my reputation, it was immediately seized by our enemies as soon as it spread to take down PAS.

“When I referred to several party leaders who understood the issue well, they decided that I should deny (the recording). I fiercely refused and objected, but they insisted.

“‘Slander must be stopped’ was their reason (as) the heat of the 14th general election increased. Pakatan Harapan had been attacking PAS with all sorts of slander.

“Faced with a conundrum, I sought an answer from the PAS president. He immediately consented to the decision that I deny (the recording). I followed, and was happy to receive a mandate,” he added in a Facebook post today.

Last year, Nik Abduh had dismissed the recording as “nonsense and slander”, which he reiterated to the media after the MACC recorded his statement last week.

Yesterday, PAS secretary-general Takiyuddin Hassan confirmed that it was Nik Abduh’s voice in the recording but said the issue was not portrayed in the proper context.

In the recording, Nik Abduh admits that PAS leaders including himself, his late father Nik Abdul Aziz Nik Mat, and even Hadi had received funds from Umno.

“I met with Hadi, Hadi said it was fortunate for us to get Umno funds, and we can do anything with it, just don’t use it for personal gain or to enrich oneself. Use it for Islam,” he had said.

He had also said that PAS received RM2 million from Umno with the knowledge of its top leaders to defeat DAP in the 2016 Sarawak state election.

In his Facebook post today, Nik Abduh said as a result of his denial, the slander failed to spread and PAS did well in the 14th general election.

The Bachok MP said he always maintained he would tell the truth under three conditions, namely if he was told to do so by PAS, in a court of law or if he was investigated by the police and MACC.

Nik Abduh said this is the reason he did not issue a denial when the recording was used as defence evidence in Hadi’s defamation lawsuit against Sarawak Report.

The PAS leader said he also told the truth to the police and MACC when quizzed on the matter.

Malaysia Chronicle @MsiaChronicle
·
9h
SLEEK BLACK MERCEDES, YET NIK ABDUH LIES AGAIN IN PUBLIC: IF AUDIO RECORDING ‘NOTHING TO DO WITH HIM’ – THEN WHY DID HIS OWN BOSS HADI BACKSTAB HIM BY CONFIRMING TO U.K. COURT IT WAS HIM

SLEEK BLACK MERCEDES, YET NIK ABDUH LIES AGAIN IN PUBLIC: IF AUDIO RECORDING ‘NOTHING TO DO WITH…
Nik Abduh might have been smarter to have downgraded his transportation when making his visit

Nik Abduh might have been smarter to have downgraded his transportation when making his visit to the MACC, although his superior morality might rightfully have considered that to be deceptive.

As it was he was photographed leaning out of a sleek black Mercedes as he spoke to journalists, who crowded around his exit asking what he had to say about money flowing from the corrupted former UMNO regime to PAS?

The image conflicted awkwardly with earlier claims by colleagues that PAS had dropped its London defamation case against Sarawak Report (who had raised concerns about those payments) because the party is allegedly too cash-strapped.

Couldn’t this senior party member so central to the case have simply flogged off this car to raise the necessary funds, rather than sending out the call for further contributions from hard up members as happened just last month?

Indeed, President Hadi Awang reiterated again that day that all the flush expenditure exhibited by the party, which included this case and contesting every seat at the last election, had been raised thanks to these very members.

He said there are a million such willing contributors (including the odd anonymous RM2.5 million payment of course).  However, those numbers are now substially depleted owing to the split in the party over these very issues: namely the growing friendship with UMNO and unexplained cash.

As media outlets explored the apparent reports currently being made to the MACC detailing further alleged lavish expenditures by senior PAS figures those remaining members must once again have wondered if it was fair to have asked them to fund the multi-million ringgit London litigation exercise in the first place? Litigation that has now come to naught.

However, by far the most astonishing revelation came when Nik Abduh repeated to those same reporters his earlier claim that the alleged recording of him telling PAS colleagues that millions of ringgit had indeed passed from UMNO to PAS (“UMNO are stupid”) was bogus. That evidence had been added by Sarawak Report to its defence.

“I gave a brief answer – it (the recording) has nothing to do with me. I have answered this before, the recording is rubbish, slander,” he responded. [Malaysiakini]

Yet his boss, party President Hadi Awang, has signed a statement of truth to the UK court confirming the recording was indeed Nik Abduh, but explaining in considerable and contorted detail why Hadi did NOT think the recording was at all slanderous.

Since Nik Abduh was listed as one of Hadi’s proposed witnesses and was contradicting Hadi’s explanation for this key piece of evidence, it is not hard to fathom at least one reason behind PAS’s reluctance for the matter to come to court.
. 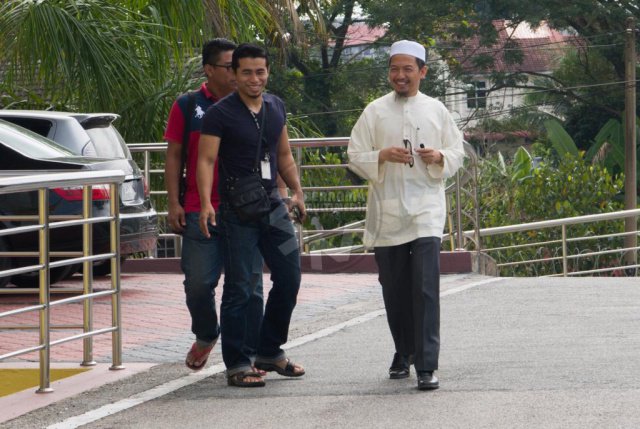 At first Nik Abduh denied everything.

“The claim that it is me speaking in the conversation is all nonsense and slanderous.

“PAS is a party that doesn’t get involved in matters that are prohibited by Islam, including taking bribes from Umno and following DAP around.”  [translation by Malaysian Insight]

Hadi’s Lawyers Accept Nik Abduh Recording Is Genuine After All

Lawyers, acting for PAS president Hadi Awang in a legal case being waged in London against Sarawak Report, have now conceded that a controversial recording said to be of a senior PAS MP, Nik Abduh, is genuine.

Speaking in court yesterday barrister Jacob Dean confirmed that Hadi will not contest the authenticity of the recording, removing the need for expert forensic evidence to identify the speaker. Hadi’s lawyers further indicated that Nik Abduh and possibly others present at the time of the recording (thought to include Hadi’s son-in-law, Zaharuddin Muhammad), would be among the witnesses his client plans to call to give evidence at trial:

Like Loading...
This entry was posted in Uncategorized and tagged It was Nik Abduh who revealed the RM90 million "gift" from Umno to PAS. Bookmark the permalink.