Najib, Mat Over and David Teo: A jolly good show? But of what?

Mat Over: Police never called me for questioning because I did not cause hurt. That incident was akin to a minor altercation in the football field.

And some said one was a DAP man

After slap incident, Najib makes an example out of Teo and Mat Over 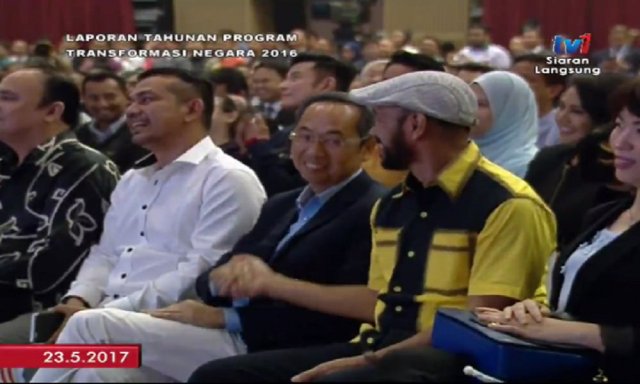 Prime Minister Najib Abdul Razak today had filmmaker David Teo and comedian Sulaiman Yassin, better known as Mat Over, sit side-by-side during his national address on the state of the economy.

He used the duo to drive his message, emphasising that he wanted to see teamwork in building the nation instead of quarrels.
.
“Ladies and gentleman, what the government and I do is for the interest of all the people, regardless of race or descent.

“So we do not want quarrels, we want everyone to get along, help one another, so that the country can be peaceful and prosperous.

“In front of me, it seems Mat Over is present so is Major David Teo, what more, they are seated together. It’s better like this.

“As prime minister, this is what I want and the government wants to see the people united, only then Malaysia can succeed,” he said in his address held at UiTM in Shah Alam.

When approached by the media after Najib’s speech, Mat Over said he came to show the students that they can both make peace.

“That’s a good example. We sat close to each other, sat side-by-side and ate on the same table,” he said.

On whether it was a good example the way he defended Najib, he said journalists who ask such questions are asking for trouble.

“(You) don’t have to say something like this, I don’t want to comment. This is looking for trouble. David Teo and me are good. Don’t say this, not good,” he said.

Mat Over said Najib had told him not to do it again, adding that he and Teo have forgiven each other.

Asked about the police probe under Section 323 of Penal Code for voluntarily causing hurt, he said the cops have yet to contact him on the matter.

He also accused Teo of being DAP’s stooge in the party’s attempt to embarrass Najib in public.

“I’m sure and I read on Facebook and WhatsApp that there are those who say Teo is DAP’s stooge.

Film director, assaulted in front of the PM during TN50 dialogue, now face the wrath of UMNO goons.

Like Loading...
This entry was posted in Uncategorized and tagged david teo, mat over, TN50 slapping incident. Bookmark the permalink.