Mahathir is 90 today. Will Najib wish him “Happy Birthday and a longer, healthier life”?

aruna and 1 other liked

Happy Birthday Tun Dr Mahathir Mohamad. May God continue to bless you with a

Dr M: Only an idiot will believe I can influence the DOJ

Former prime minister Dr Mahathir Mohamad reiterated today that only an idiot will believe he can influence US Department of Justice (DOJ) to initiate civil forfeiture suits against 1MDB.

In his latest blog posting, Mahathir sardonically said that he was flattered by claims that he, a powerless man, could instruct DOJ to do something.

“If I could issue a directive to a US agency, then someone would have been arrested and charged for stealing billions of dollars long ago. Equitable punishment would have been imposed on such a person,” he said.

“Unfortunately, I, as the former prime minister of ‘toothless’ Malaysia, do not have such influence over any agency in the US, and also in Malaysia,” he said.

“Only those who are stupid will believe,” he said, adding that this showed that ‘dedak’ (bribes) given by the prime minister Najib Abdul Razak may have worked on these people.

Unlike Malaysia, which is satisfied with Prime Minister Najib Abdul Razak’s statement that an Arab national donated the RM2.6 billion to him, Mahathir said the US took stern action against those involved in money-laundering. 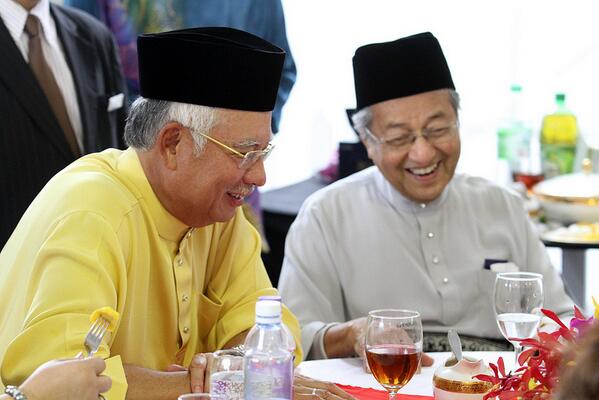 ONE of the chief evil doers was Mahathir himself. How can this nation be saved from evil doers by an evil doer?

Happy 91st Birthday Tun. May Allah strengthen your resolute to save this nation from the clutches of evil doers.

Happy 91st Birthday Tun Mahathir. For all the greatness you’ve helped Malaysia achieve in the eyes of the world. Thank you.

Hi its me ! and 2 others Retweeted

Like Loading...
This entry was posted in Uncategorized and tagged Mahathir is 91 on 11 July 2016, mahathir mohamed, malaysia, najib, politics. Bookmark the permalink.