In Singapore: Bully on MRT may soon get what he deserves

Man who stood up to bully on MRT

The t-shirt on the teenager said, “I am f-king Special”. 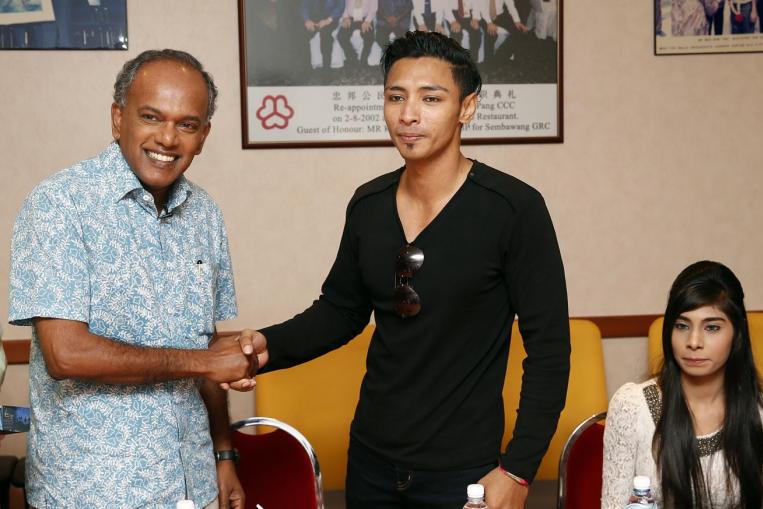 I just wanted to stop a fight: the man who stood up to the bully on the MRT train http://str.sg/ZUZU

SINGAPORE – Mr Muhammad Hanafie Ali Mahmood, 25, had only one thing on his mind when he went up to stop a commuter from bullying another man in the MRT – to prevent a fight from erupting.

“I was worried that the bully would lay hands on the man,” Mr Hanafie said.

Recounting the incident to reporters at Chong Pang Community Club on Wednesday, Mr Hanafie, who is unemployed, said he was riding the North South Line train from Orchard at about 11pm last Tuesday with his girlfriend, Ms Nabilah Nasser, 23, when a man started to lash out at another man in the train carriage.

The two men had boarded the train at the Bishan station.

In a video recording of the incident filmed by Ms Nasser, a commuter could be seen scolding and threatening a younger man who was wearing an expletive-bearing t-shirt that said ‘I’m F–king Special’.

When the train reached Ang Mo Kio station, the aggressor threatened to throw the victim out of the train. In the video, he could be heard saying: “Are you getting off? If not, I’m going to throw you off.”

It was at this point that Mr Hanafie, who also goes by the nickname Elfy, decided to intervene.

“It just doesn’t make sense. The man kept scolding the victim about his t-shirt,” he said, adding that the victim had kept quiet and avoided eye contact with the aggressor to not provoke him.

The victim, who looked like he was in his early 20s, was smaller than his aggressor. The young man was also wearing his backpack in front and the words on his shirt could not be clearly seen, added Mr Hanafie.

The identities of the victim and aggressor are not known.

Mr Hanafie was speaking to reporters at an iftar session at the community club with young professionals and students.

MRT Abang Who Fended Off Angry Ang Moh: “Stand For Your Right and Help Singapore” – RedWire…
“Do always stand up for ur right and help our nation as well.” That’s the response that Hanafie, or “Elfy” has given well-wishers, who praised him for fending off an…
redwiretimes.com

Law Minister K Shanmugam called out a bully, who threatened a teen on the MRT, on social media http://ow.ly/PAYe8

—
Jul 14, 2015 10:05pm
Minister for Law K. Shanmugam took to social media on Tuesday (July 14) to denounce the behaviour of a man who was caught on camera threatening a teenager in a crowded MRT train. The man had berated the teen loudly for more than two minutes after having taken offence at his T-shirt, which contained vulgarities. Mr Shanmugam posted: “Unacceptable bullying conduct. People like this are sick in their mind. And try and take it out on others. I hope his employer will take some action, against him – he brings his organisation into disrepute.”

K Shanmugam Sc
8 hrs ·
Came across this video. Unacceptable bullying conduct. People like this are sick in their mind. And try and take it out on others. I hope his employer will take some action, against him – he brings his organisation into disrepute. Good to see someone, in this case Elfy standing up to this bully. His comments on the incident, that we are a multiracial society that should respect each other, are wise. Elfy’s comments can be seen in the post link below. http://singaporeseen.stomp.com.sg/…/man-who-stood-up-to-agg…

To my all followers in singapore… thankyou for the supports all have given to me..😊😊 We are singaporean born to live with multiracial.. so we grown up with multiracial.. all humans is meant to being respect by others… do not plan a racism laa.. despise towards different skin or criticise others failures…singapore get grow when the human is good.. so we will live will grow n will die in this island temasik was known long2 ago… who ever need in trouble we come and help who ever is success we come an applause… so this is how we live… love amongs each other… malay also eat chiness also eat indian also eat and everybody also eat for us to live..

Malay eat nasi lemak.. othee people also can eat nasi lwmak maa.. chiness eat yong tau fu malay n indian also can eat maa? Tiobo? N we need to have RESPECT towards each other then we can live… if no respect u make ur own grave.. no use right?..lets grow ourself n protect our living together..smile emoticon Have a good time ahead

Wise words from macho bro who stood up to aggressive commuter threatening teen on train http://bit.ly/1M3t6Hk 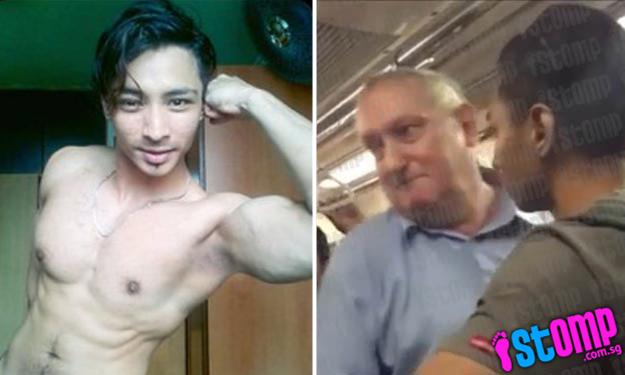 … The man who stood up to the unreasonable commuter who was threatening a teen on an MRT train has thanked the public for their support and well wishes. On Friday (Jul 10), Stomper Nabilah alerted Stomp to an old man who verbally abused a teenager for wearing a shirt with offensive words in a packed MRT train. A passenger by the name of Elfy then confronted the old man for his aggressive behaviour. Both men left the train thereafter. Following the incident, Elfy has thanked those who have supported him via his Facebook page. http://singaporeseen.stomp.com.sg/singaporeseen/this-urban-jungle/man-who-stood-up-to-aggressive-commuter-says-thank-you-to-all-who-have-supported#xtor=CS1-4 —

Hello friends! Thank you for supporting my video. And to my friend Elfy, I’am proud of u for standing up against the big bully. I’ve been receiving thousands of msgs in my Facebook wanting to know what actually happened after the Ang Moh exited the train. The Police officers who appeared to be from the Special Operations Command did was asking him to calm down and thats it. When we tried to show what actually happened as a prove, they refused to watch. They allow the angry old man to take the same train together with us. LOL. But after the police left, the old man walk away…. — with Loony Gates.

I am extremely dissappointed with the Officers AFTER that “ANG MOR” out from the train.. they left free the ang mor alone at platform alone as if nothing will happen after that.. Come on la Police. if cannt be a policeman pls go back home n help mummy cooking.. Do not show urself with uniform walk around the platform like super model.. if just want to attract girls to flaunt ur uniform go orchard lucky plaza.. jalan2.

Come on la NS boy…’Uniform singaporeans’ .. what the hell are u doing?? Wakeup laa!! Dont make ur skin lose face!! Bring singaporean up la!! When people already on uniform is already know what is law n what is right… I am here for my own right:)

2 Responses to In Singapore: Bully on MRT may soon get what he deserves