Director-general says confusion among the public after press report of RM2,000 fine and jail.

KANGAR: The Road Transport Department has denied a news report of a purported RM2,000 compound fine on those tinting the windows of their cars beyond the legal limit.

There had been public confusion after a report in The Sun quoting Transport Minister Liow Tiong Lai, he said.

“The fine of up to RM2,000 or six months in jail, as reported, is for the owner of a car or driver who is convicted in court for not complying with the traffic rule for the first time,” he said.

However, JPJ tolerated a variance of up to 10 per cent for offences related to the tinting of car windows and speeding before issuing any compounds. He urged those with queries about the enforcement of the rules to approach any JPJ counter near them.

Ismail said JPJ had received criticism from people who were unhappy with the reported high fine and who accused the department of being out to make a profit.

PUTRAJAYA: Errant motorists who refuse to adhere to the law on permissible level of tinting for windscreen and side windows will face higher fines and penalties under a new law gazetted earlier this month.

The latest regulation on dark tinting under the Motor Vehicles (Prohibition of Certain Types of Glass) (Amendment) Rules 2016 is a stiffer law than the previous 1991 regulation.

The amended law, already enforced since Feb 6, will see first time offenders fined up to RM2,000 or six months jail while repeat offenders can be fined up to RM4,000 or 12-month jail sentence, or both.

Under the previous regulation, first time offenders were slapped with RM500 or a two-week jail term while repeat offenders faced a RM1,000 fine or a one-month jail sentence.

The only notable change under the 2016 regulation is the minimum translucence level of the windshield or visible light transmission (VLT) for rear side windows and rear windscreen set at 30%.

Previously, the permissible level was set at minimum 50% VLT for rear side windows and rear windscreen.

Meanwhile, the minimum VLT level for front windscreen still remains at 70% while for front side window (driver and front passenger) remains at 50%.

With the new law already gazetted, theSun understands that police are set to hunt down errant vehicle owners considering that ample notice had been given since November 2014. 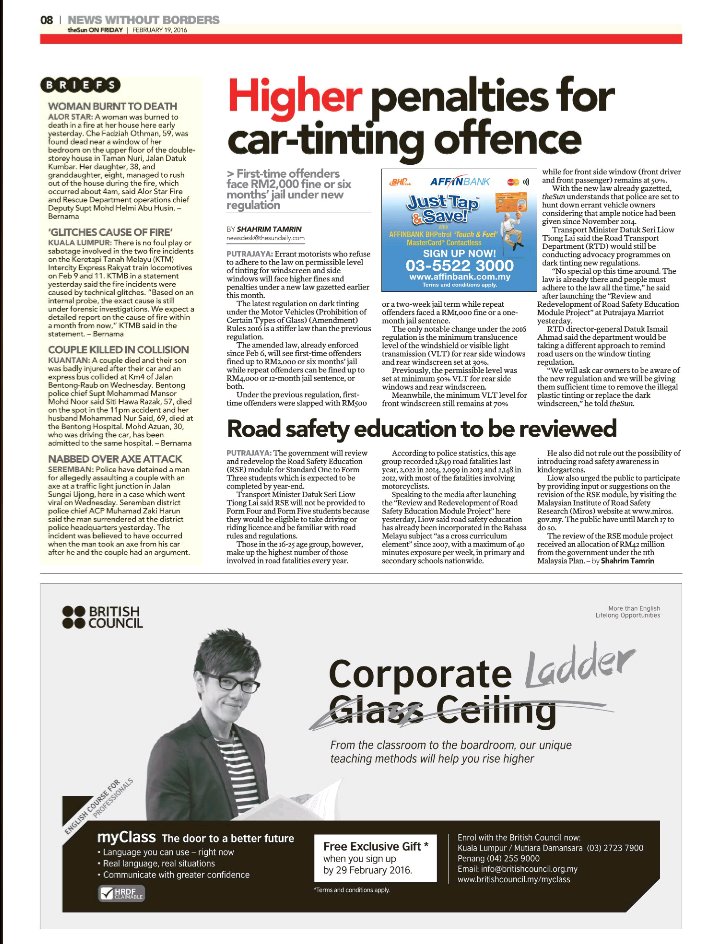 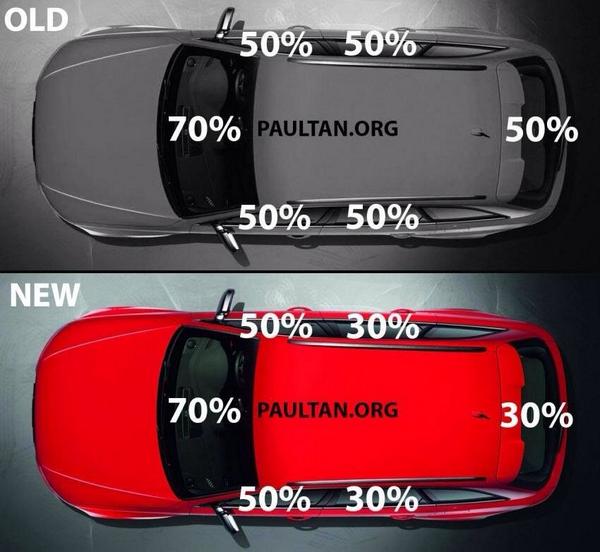 JPJ to enforce new tinting rules on May 1 – report

Reported new tint regulations effective May 1.
VLT expressed in percentages; the lower the number, the darker the tint

The Road Transport Department (JPJ) will enforce the new window tinting regulations starting this Friday, marking the end of a six-month postponement, according to Harian Metro.

JPJ to enforce new tinting rules on May 1 – report 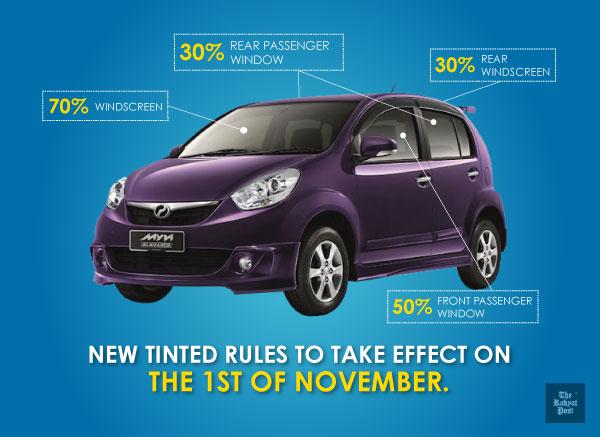 Ismail said the new date was meant to give owners of imported vehicles ample time to replace the windscreens and windows.

“They have until April 30 to replace them,” he said here, Thursday.

The new regulation on tinting for car windscreens and windows will be enforced beginning May 1, 2015.