The BMW Series: Not the car but the registration plates!

Posted on October 7, 2014 by weehingthong

PUTRAJAYA: The Road Transports Department (JPJ) did not upload on its website the list of official successful bidders for the “BMW” vehicle registration plate so as protect and respect the privacy of the successful bidder.

“It is also to avoid all the negative perception that the public will have of the successful bidders,” said JPJ director-general Datuk Seri Ismail Ahmad.

Citing the controversy over the “WWW” number plate, Ismail said the department did not want a repeat of the hoohah that happened then.

THE LICENCE PLATE BMW 1, AND THE BMW M6!

The “Anggota Pentadbiran Kerajaan” (Government Civil Servant paid RM 0 for BMW1 license plate and look at the car he drives – BMW M6 series which cost roughly RM800,000 (US$270,000). What the fuck! 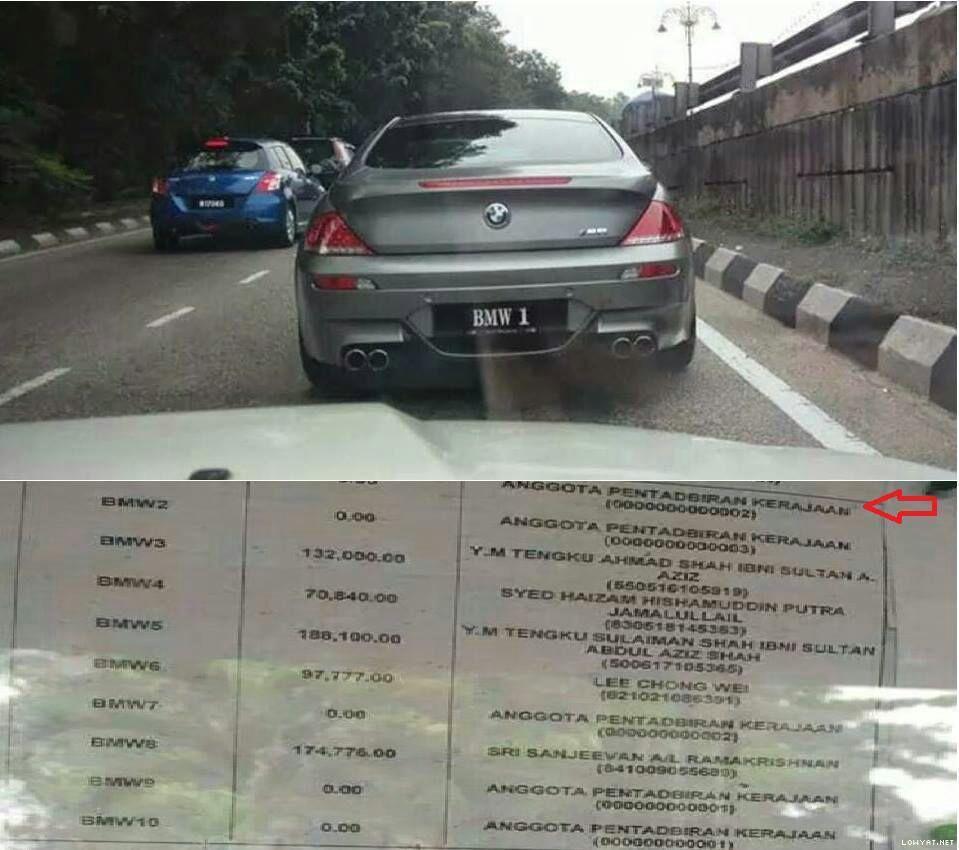 ENEMIES AND CRITICS OF R. SRI SANJEEVAN, IN THEIR ATTEMPT TO SMEAR HIS NAME AND REPUTATION, UNWITTINGLY HIGH-LIGHTED THE WIDER ISSUE OF ANONYMOUS BIDDERS AND WINNERS!

The five anonymous bidders came to light recently when anti-crime activist R. Sri Sanjeevan was found to have paid almost RM340,000 for the number plates BMW 8 and BMW 11.

This raised speculation on social media, where the list was circulated, that government personnel had obtained the car number plates for free.

Ministers are only awarded one free car registration number.

Cabinet ministers, judges and members of the royalty were the anonymous bidders who won sought-after “BMW” number plates from the Road Transport Department (RTD), which said it was normal procedure to blank out their names to avoid negative public perception.

He told The Malaysian Insider that the successful anonymous bidders did pay for the registration plates BMW 1, BMW 2, BMW 7, BMW 9 and BMW 10 but he could not give the total amount the department collected from these five number plates.

“They made bids for the numbers and they got it. We withheld their names and the figures to avoid negative public perception,” Ismail said, adding that they were cabinet ministers, judges and royalty.

He said it was also standard operating procedure to keep the names a secret and not an issue of transparency.
…

The five anonymous bidders came to light recently when anti-crime activist R. Sri Sanjeevan was found to have paid almost RM340,000 for the number plates BMW 8 and BMW 11.

The MyWatch chairman was listed along with other successful bidders for the numbers 1 to 12 with the BMW prefix, for cars registered with the Selangor RTD.

In the same list were the five number plates won by government administration personnel, whose real names, identity card numbers and amount paid were not listed.

This raised speculation on social media, where the list was circulated, that government personnel had obtained the car number plates for free.
…

But it was Sanjeevan, whose anti-crime activities have led him to make exposes on the police force, who got flak for the exorbitant sum spent on number plates and had to defend himself.

Using the Twitter handle @SanjeevanSS, he replied to a user with the handle @ibdil, saying: “Think before u talk about others – yes I bought with my own money so u have problem? But u… Haha I reserve my comments.”

@SanjeevanSS also said on twitter: “I’m a good citizen because I contributed my halal earnings to govt but what about those people who taking it for free? Lost of revenue right.”

Dogs, jackals and vultures scent blood! They hope to bring down MyWatch Chairman, R Sri Sanjeevan, over the BMW8 and BMW11 number plates.

R. Sri Sanjeevan @SanjeevanSS • 22h 22 hours ago
No one can question me for spending my hard earned money but everyone can question if public fund is being wasted – 2 different scenarios.