The Strait of Malacca Bridge: A bridge too far?

Posted on September 24, 2013 by weehingthong

THE PROPOSED STRAIT OF MALACCA BRIDGE

It will be 127.92km in length and link Dumai in the Sumatran province of Riau and Malacca.

The proposal to build a bridge across the Straits of Malacca will have significant impacts on the shipping, environment and trade dynamics in the sea lane.

The recent announcement by a little-known group called the Straits of Malacca Partners Sdn Bhd to build a project to build a RM44 billion bridge linking Peninsular Malaysia and Sumatra has set the maritime community abuzz.
…

Environment
…
…there is no doubt that such a massive project would adversely affect the coastal ecosystems on both sides of the bridge, and its impact would be felt by the Straits as a whole.

On a larger scale, the project could change the hydrology of the Straits. The movement and speed of currents would be altered by the presence of pillars supporting the bridge, and could potentially alter the nature of the Straits.
…

The presence of the bridge would likely generate several impacts to maritime trade, ports, shipping traffic and infrastructure developments in and along the busy waterway. A project of this magnitude would surely alter the landscape of maritime trade in the surrounding areas and would reshape the dynamics of the economy in the area including shipping, port operations and other related activities.
…

A thorough and comprehensive study of the potential cost-benefit, legal, environmental, strategic and socio-economic impacts of the project needs to be conducted before any decision on such a colossal project is made.

Until then, the proposed bridge across the Straits of Malacca will remain a bridge too far.

IT TAKES TWO TO TANGO. Malaysia is one, and Indonesia is the other, and the latter is not keen.

The Indonesian government has said that it is not rushing to move ahead with the Straits of Malacca bridge project anytime soon and would first study the bridge’s prospects and benefits prior to making any final decisions.

“We understand that this project is important to strengthen connectivity across Asean, particularly between Indonesia and Malaysia. But, we have to be fully prepared in terms of infrastructure, safety and security before this bridge is constructed, as it will connect our country to the whole of Asia, not only Malaysia,” Public Works Ministry’s director-general Djoko Murjanto told The Jakarta Post yesterday.

“Our position is that we are not rushing this project; nor do we have it on hold. We have not yet seen any urgency for it,” Djoko said.

Bridge to Dumai: Don’t jump (for joy) too soon

Lee said the government should conduct a thorough cost-benefit analysis before it carrying such a mega-project.

He said it would be an extra burden for the government to contain the increasing national debt because work on the Mass Rapid Transit project had already started.

The chief economist suggested revamping the public transportation system in the country before thinking of a bridge to connect Indonesia.
…

Meanwhile, the Maritime Institute of Malaysia (MIMA) in a published analysis in October 2009 stated that the construction of a bridge across the Straits would hamper the safe movement of ships and traffic flow.

“The presence of the bridge would present an obstacle for the smooth flow of shipping traffic in the narrow waterway.

“The construction and presence of the bridge would not only reduce the speed of ships transiting through the Straits but would also cause difficulty for large container vessels to navigate through,” said MIMA researchers in their analysis.

MIMA also said that the movement and speed of currents would be altered by the presence of pillars supporting the bridge, and could potentially alter the nature of the Straits.

In addition, a bridge over the Straits would also cause an impact to the seabed ecosystems of the areas.

Bridge to Dumai: Don’t jump (for joy) too soon

MALACCA: The Malacca business community has urged the state government to include it in discussions on the proposed Malacca-Dumai Bridge project.

Malacca Chinese Chamber of Commerce and Industry chairman Tan Poh Seng said the government should convene a round-table discussion with local business leaders from all communities before reviving the multi-billion-ringgit pro­ject.

Tan said under current economic conditions, many locals were employed under minimal salaries and matters would worsen with an influx of foreigners via the bridge into the already saturated local job market.

“It would be easier for Indo­nesians to cross over here where some employers might prefer hiring them on lower pay scales.
…

“We have to evaluate whether the local business community will benefit or suffer from the project.

“Local tourists could also frequent the other side more often in search of cheaper products due to the exchange rate between the ringgit and the rupiah.
…

Tan said the government should also consider the security aspects of the project as the bridge would make it easier for foreigners to commit crime and escape in just hours.

MALACCA: The Malacca Government has revived the controversial 48.69km-long Malacca-Dumai, Indonesia, bridge project across the Straits of Malacca, after a seven-year lull.

Chief Minister Datuk Seri Idris Haron said finer details of the project linking Teluk Gong in Malacca in the peninsula to the port of Dumai, in Sumatra, would be revealed when all mechanisms were in place.
…

The project was discussed during the 10th Chief Ministers and Governors’ Forum (CMGF) of the Indonesia-Malaysia-Thailand Growth Triangle (IMT-GT) convened in Koh Samui, Thailand, on Sept 12.

Plans have been mooted to construct a bridge to link the Indonesian port-city of Dumai in the Sumatran province of Riau with Malacca. This bridge will obviously result to any of these two circumstances; linking or breaking the region.

This proposed 127.92km-long bridge is said to be capable of fostering new economic opportunities between the two countries particularly in stimulating trade and the tourism industry. Malaysia will undertake to build 48.68km of the bridge while Indonesia will construct the remaining 79.24km.
…

The proposed Strait of Malacca Bridge is likely to resemble the Oresund Bridge that connects the Danish capital of Copenhagen in Denmark and Malmo in Sweden.

posted Apr 25, 2011, 9:24 AM by lester tan   [ updated Apr 25, 2011, 9:41 AM ] KUALA LUMPUR, Aug 18 (Bernama) — A project to build a bridge linking Melaka and Sumatera will proceed when approvals are given by the Malaysian and Indonesian governments, said Melaka Chief Minister Datuk Seri Mohd Ali Rustam.

The chief minister however, hoped the two governments would soon give the approval to build the bridge.

He was speaking to reporters at the Straits of Malacca Bridge Project seminar organised by Strait of Malacca Partners Sdn Bhd here today.

The aim of the seminar was to explain to Malaysian and Indonesian representatives, the architectural design, engineering and financial assistance required to build the bridge. 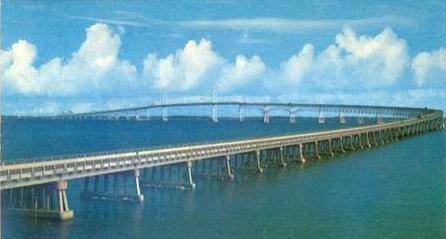 Like Loading...
This entry was posted in Uncategorized and tagged bridge, copenhagen, Dumai in Sumatra, Indonesia, malacca, malaysia, malmo, Oresond Bridge in Denmark and Sweden, proposed Strait of Malacca Bridge. Bookmark the permalink.

2 Responses to The Strait of Malacca Bridge: A bridge too far?