The Tourism Minister was the man who shot first and asked questions later.

Tourism and Culture Minister Nazri Abdul Aziz said he had withdrawn the endorsement given by the National Visual Art Gallery (BSVN) for the M50 Malaysia Day exhibition because the artwork ‘I is for Idiot’, which is being probed by the police, is deemed “offensive”.

Artist of I is for Idiot cleared of insulting Islam

Prominent artist Anurendra Jegadeva, whose painting “I is for Idiot” caused an uproar among a few conservative Muslim groups recently, has been cleared of allegations of insulting Islam.

His controversial painting was returned to him and Anurendra told The Malaysian Insider that it was sold for an undisclosed amount.

The artist, popularly known as J Anu, was investigated under Section 298 of the Penal Code for intent to wound the religious feelings of any person after a report was lodged against him.

The painting, which was on display at the M50 Selamat Hari Malaysia exhibition at Publika in Solaris Dutamas in Kuala Lumpur, was confiscated by police on August 29.

Anu said he was called to the Sentul police station on September 13 where he was questioned for almost four hours.

“Five days later, I was informed that Jakim had found no offending element in my painting,” he said, referring to the Department of Islamic Development Malaysia.
…

According to Anu, the exhibition did not continue after his painting was confiscated two days before National Day.

“The accusations were uncalled for and baseless,” Anu said.

Artist of I is for Idiot cleared of insulting Islam

He accuses the organizers of lying. “We didn’t know they were lying. When they came for a presentation, they did not show us that particular painting.”

The exhibition runs from Aug 27 to Sept 17, and is co-organised by MapKL@Publika, Balai Seni Visual Negara and the Tourism and Culture Ministry.

Tourism and Culture Minister Nazri Abdul Aziz said he had withdrawn the endorsement given by the National Visual Art Gallery (BSVN) for the M50 Malaysia Day exhibition because the artwork ‘I is for Idiot’, which is being probed by the police, is deemed “offensive”.

“Every exhibition must go through a committee in the BSVN, which is under my ministry,” he said.

“On the issue of the (‘I is for Idiot’) artwork, it was not shown to the committee, so when it was displayed at the exhibition, that means the person responsible is not being honest,” he added.

“And when the artwork was exhibited, we found it offensive. So we have ordered it (installation) to be withdrawn,” he told reporters after attending the 50th anniversary of the National Museum today.

Today, politicians from both sides of the divide condemned the video, which has since been viewed about 3,000 times.

Politicians from both sides of the divide have called a video released by Ikatan Muslimin Malaysia (ISMA) in conjunction with National Day tomorrow as “widely inappropriate”.

The 23-minute video clip on YouTube showed the Islamic group criticising several other groups they claimed were attempting to alter policies that favour Malays and Bumiputeras.

They had also listed four main threats faced by Malaysia – liberal ideology, chauvinism, Christianity and deviant Shia teachings – all of which, the group said, affected the majority Malay population and their identity.

“If the Malays want to rise and fight back, they will be unable to do so if they don’t know what their identities are,” ISMA chief Abdullah Zaik Abdul Rahman said in the video and a statement released yesterday.

This is the video

Police are investigating the matter under Section 298 of the Penal Code which deals with religious insults, following a police report on Aug 28 by Islamic NGO, Muafakat.

Muafakat said the art work is offensive as it allegedly depicts Islam and Muslims as idiots, and had reversed the Quranic verse.
The work was part of the M50 Selamat Hari Malaysia exhibition at Publika Mall. Anurendra’s other work, which was part of the show, has since been removed for safekeeping.

Artist: ‘I for Idiot’ refers to George Bush

The artwork ‘I is for Idiot’ seized by police for alleged insult to Islam is actually referring to the US invasion of Iraq under the administration of George W Bush, the artist explained.

As such, Anurendra Jegadeva (below) said that his intention was not to insult Islam but rather the opposite-the stand in solidarity with “the Iraqi person-on-the-street”, most being Muslim. 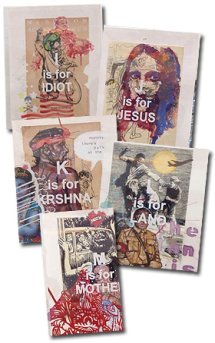 He also explained that the Quranic verse he had used was to represent the Iraqis and that it was reversed to depict the situation in the world then.

“This (the reversing of the verse) was done, with the best of intentions, to depict that moment in world history when everything seemed upside down and inside out,” he said.

“As such, in the case of this reversing of the verse, there is no malicious, evil or mischievous intent involved in anyway to insult or belittle the faith,” he said in the statement.

All the same, the accomplished artist whose works have fetched as high as RM30,000 apologises for the offence he has caused from his work.

Artist: ‘I for Idiot’ refers to George Bush

The Islamic group Ikatan Muslimin Malaysia (ISMA), instead of a celebration, produces a video in condemnation of others.

A screenshot of the YouTube clip at the start of the video produced by Ikatan Muslimin Malaysia. Click on the image to view the clip. August 30. 2013.

Islamic group Ikatan Muslimin Malaysia (ISMA) has produced a video clip for the National Day celebrations tomorrow, criticising several other groups they say are attempting to alter policies that favour Malays and Bumiputeras.

The video also listed the four main threats faced by Malaysia – liberal ideology, chauvinism, Christianity and deviant Shia teachings – all of which, the group said affected the majority Malay population and their identity.

“If the Malay people want to rise and fight back, they will be unable to do so if they don’t know what are their identities,” ISMA chief Abdullah Zaik Abdul Rahman said in the video and a statement released in Kuala Lumpur today.

For the full article

Anwar calls for dialogue with BN

Opposition Leader Anwar Ibrahim today called for an open dialogue between the government and the opposition in order to address pertinent national issues.

“We are proposing that we have an open dialogue, its going to be transparent and conducive,” he said after giving his Merdeka address at PKR headquarters this morning.

Anwar calls for dialogue with BN

On eve of Merdeka, Anwar holds out an olive branch to Najib: PR moots round-table with BN

…
Notwithstanding our strong protests about the validity of the outcome of the last elections, we are prepared to put aside our differences for the sake of the nation’s well-being and future. In this regard, we believe that it is imperative for the Prime Minister to convene without the slightest delay a round-table meeting between the BN government and Pakatan Rakyat in order to deliberate on the issues raised and formulate a comprehensive solution.Celebrating Merdeka must be about recognising the good that has been done and not repeating the mistakes of the past. The resolve to do what is good for the nation must be our main concern. The Merdeka spirit is not just about tolerance or compromise. It is about greater understanding, embracing our differences and enhancing our similarities as well as propelling the nation forward to face the challenges ahead.ANWAR IBRAHIM IS LEADER OF THE MALAYSIAN OPPOSITION
Full article: http://www.malaysia-chronicle.com/index.php?option=com_k2&view=item&id=153352:on-the-eve-of-merdeka-anwar-holds-out-an-olive-branch-to-najib-pr-moots-round-table-with-bn&Itemid=2#ixzz2dQVRp300
Follow us: @MsiaChronicle on Twitter

5 reasons to be thankful this Merdeka

COMMENT Growing up, we were never the family that put up flags.

In contrast, I was the child who would be the first to volunteer for Pertandingan Nyanyian Lagu Patriotik and would secretly wish my mother was the type to make us cake with icing the colour of the Malaysian flag for Aug 31.
…

1) We can choose what movies we want to watch, and decide for ourselves what is true or what is fiction…and what is sneakily in between.
…
2) We get the benefit of regional artists coming to Malaysia to stage their work, which has enjoyed successful runs overseas.
…
3) We can exhibit our artwork without anyone taking insult, or worse still lodging a police report claiming some sort of criminal offence.
…
4) We don’t have to endure state propaganda everywhere we go, and especially not in our private time of leisure be it at home or, God forbid, in the cinema.
…
5) We can practice our religion as we deem fit, as long as we do not hurt or maim anyone.
…

Thank God we are Malaysians. May we always be free.

AIDILA RAZAK is a member of Malaysiakini team

5 reasons to be thankful this Merdeka

…On the occasion of our 56th National Day, it is my hope that  all Malaysians can rally behind a Malaysian Dream to build a more united, democratic, free, just and prosperous nation for all Malaysian citizens so that Malaysia can stand tall in the world.

Is this too much to hope for when in recent months, the language and  politics of hatred, suspicion and distrust seemed to have taken dominion of public spaces whether in print or Internet, causing concerned Malaysians to be worried about the nation’s future?
…

I believe the overwhelming majority of Malaysians, regardless of race, religion or region, are patriotic citizens.
…

It is only on the back of the Malaysian Dream that Malaysia can achieve a tryst with Destiny to accomplish greatness in various fields of human endeavour and to become one the leading nations of the world. – August 30, 2013.

* Lim Kit Siang is a DAP Parliamentary Leader and MP for Gelang Patah.

* This is the personal opinion of the writer or publication and does not necessarily represent the views of The Malaysian Insider.