Tommy Thomas: The AG’s Chambers will no longer represent the EC in court.

We refer to the statement yesterday by former CJ Abdul Hamid Mohamad criticising A-G Tommy Thomas’ announcement that the AG’s Chambers will no longer represent the EC in court, and alleging that Thomas had said that he would not conduct any prosecutions.

Firstly, the new A-G never said that he would not conduct any prosecutions. It is wildly irresponsible of the former CJ to make such a claim.

Thomas only said that he supported the Bar’s position that the role of A-G and Public Prosecutor should be kept separate. He said he would push for this to happen; but never said or suggested in any way that he would not conduct prosecutions meanwhile!

The reason for the separation of roles is clear to all right-thinking persons; to prevent a repeat of the abuse of power and selective prosecution practiced by BN-era Attorney-Generals. Indeed, this was a promise made in the PH manifesto as well.
.

Hamid next criticises Thomas’ recent announcement that the A-G’s Chambers will henceforth not represent the EC in court. Bafflingly, Hamid claims that there will be no conflict of interest if the EC continues to be represented by the AGC.

The EC is an independent body created by the provisions of the Federal Constitution, which must be insulated from any influence or pressure from the government.

In election petition court cases, there will usually be 3 parties. These are the losing and winning election candidates, and the EC.

Obviously, either the losing or winning candidate, must be from the party of government; whereas, the A-G is the legal adviser of the government.

If the A-G being the legal adviser of the government then represents the EC in the dispute between the government party candidate and opposition candidate, it follows as night follows day, that there will be a conflict of interest!

In any event, the past conduct and strategies of the EC in court, which fought hard to defend positions which favoured and benefitted the BN regime, is ample evidence of the dangers of the government’s legal advisers also advising and representing the EC.

This is all elementary, and beyond dispute.

However, Hamid’s views are hardly surprising; his long track record of excessive and prejudiced statements, which favoured the BN regime’s racial polemics and politics, are a matter of public record.

His attack on the changes being spearheaded by the new A-G is in direct opposition to the reform agenda overwhelmingly endorsed by Malaysians through the 14th General Elections.

Is the new AG choosing his briefs like a private lawyer?

| In a recent article I said: “It (Tommy Thomas’ appointment as attorney-general) has become a reality. So, I will not argue about it. On the contrary, I will wait and see what he will do regarding certain issues and, if it is necessary, comment on it and even support or oppose it.”
.

AGC will not represent EC?

Now, I refer to his decision that officers of the Attorney-General’s Chambers will no longer represent the Election Commission in election petition cases.

Thomas said in a statement that reported:

“As the neutral arbiter in the conduct of elections, the EC should not be represented by members of the AGC because of any potential conflict of interest and the perception that justice must be seen to be done.

“Because members of the government are invariably parties to such election petitions, whether as MPs, state assemblymen or defeated candidates, it is invidious for the AGC to also act for the EC.”

Before going any further, let me state that in an election petition, in a straight fight between two candidates, there will be three parties – the petitioner, that is, the losing party, the respondents consisting of the winning party, and the EC.

Even though the allegation is only against the other candidate, EC is made a party to the petition so that whatever order is made by the court, will bind the EC.

Bear in mind that each party involved will engage his own lawyers, except the EC which will be represented by the AGC.

The reason why the AGC represents the EC is because it is a government agency, established by the constitution, fully financed by the government; its officers are public officers subject to the laws and regulations applicable to civil servants, in the discharge of their official duties.

They cannot be expected to pay from their own pockets. Neither the EC has an allocation for employment of private lawyers when sued because the AGC is there to represent it.

That is part of the AGC’s job. It does not cost the government anything extra and that has been the arrangement ever since the EC was established.

I spent forty years in the judicial and legal service and the judiciary. Not even once did I hear any complaint of conflict of interest, otherwise, I am sure, it would have been made a ground of such petitions.

Regarding public perception, how does it arise? What prejudice or injustice does it cause to the petitioner? I did not hear any such complaint as a ground of petition or otherwise.

In the example above, the legal officer would not be actively defending the petition as the allegation is not made against the EC.

Let me give another example, that is, where the allegation is made against the EC, say, it is alleged that the returning officer had wrongly refused a request for a recount.

Here, the legal officer from the AGC who represents the EC will take an active part to defend it. He acts as counsel to present the case and the arguments on behalf of the EC for the court to decide.

Again, how does the conflict of interest or the perception arise? It had never been an issue all these years. I just cannot foresee how it can arise.

It is said that it may give rise to the perception that justice is not seen to be done, because the party involved may be a government MP, or, I would add, the PM himself.

How does the perception arise?

With respect, I do not understand the logic of it.

Take the example that the allegation is made against the EC above. The winning party may be a government or an opposition MP. The legal officer’s duty is merely to prove to the court what was done by the returning officer was in accordance with the law. In doing so, he may be arguing in favour of the government or the opposition MP.

That is not his concern. He is a professional. So is the judge. It is the judge who will decide. I myself have decided in favour of opposition and government MPs. In one case, I decided against a BN chief minister causing him to lose his job.

Based on the reasoning given by the AG, from now on the AGC will not be giving them any legal advice or represent them in any suit, civil claims included, nor represent their officers sued in respect of their official duties.
.
Of course, the members of the Bar will be happy as a lot of work will go to them, provided those commissions have funds to pay their bills.

That is the problem when you pick a lawyer, experienced only in running a law firm consisting of a few partners and a handful of staff, to head a huge legal department which services numerous government ministries, departments and agencies.

ABDUL HAMID MOHAMAD is the former chief justice of the Federal Court.

Lawyers for Liberty says decision by AGC not to represent EC in any case involving election petitions prevents any conflict of interest and also accusation of bias.
,

PETALING JAYA: Lawyers for Liberty (LFL) has hailed Tommy Thomas’ announcement today that the Attorney-General’s Chambers (AGC) will not represent the Election Commission (EC) or any other party in election petitions, saying it pre-emptively safeguards the independence of the EC.

Its executive director, Eric Paulsen, said the move by the attorney-general would reassure the electorate that the new Pakatan Harapan (PH) government and the EC are not “bedfellows”.

He claimed it would impress on the people that there would not be a repeat of the “transgressions” seen under the previous Barisan Nasional (BN) administration.

He said the previous practice of the EC obtaining legal representation from the AG, who acted as the chief legal adviser to the government, was untenable.

It ran contrary to the doctrine of separation of powers and the essential role that the EC must enjoy public confidence.

“As an independent body established by the Federal Constitution, the EC must at all times act or be seen to act independently, fairly and free from bias.”

Paulsen said prior to the general election, the notion that EC was serving the interests of the then BN government was reinforced when the AGC represented it against legal challenges over its controversial redelineation report.

“Blatant instances of gerrymandering and malapportionment in favour of the Barisan Nasional government triggered multiple legal challenges by dissatisfied stakeholders, including voters, MPs, local councils and even the Selangor state, all of which were unsuccessful.”

He said if the AGC was called to act as counsel for the EC in election petitions filed by candidates from PH, which took over the government in the polls, it would cause a severe conflict of interest.

“Likewise, if election petitions were filed by BN or other opposition candidates, it could be argued that the AGC would be biased due to their political affiliation with the government of the day,” he said.

JUST IN: AG Tommy Thomas says that Malaysia’s AG Chambers will not represent the Election Commission in any election petition case

Bravo #tommythomas! This is what rule of law means! 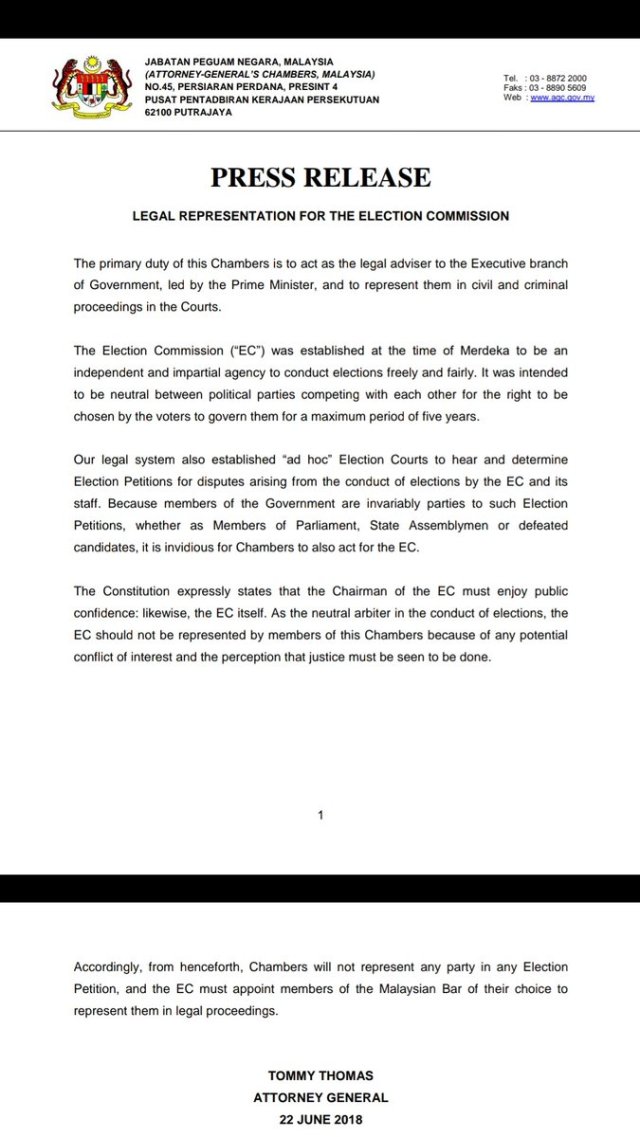 Like Loading...
This entry was posted in Uncategorized and tagged Ex CJ Hamid, LFL, The AG’s Chambers will no longer represent the EC in court., tommy thomas. Bookmark the permalink.