Mahathir: I resigned from Proton. I was not sacked.

Dr. Rais Hussin and 2 others Retweeted

http://chedet.cc/?p=2043  Proton is not such a disaster as spewed by Najib and honchos.Fair is fair.Evaluate professionally NOT spitefully

To: Proton car owners and buyers

I feel I owe you all an explanation as to why I resigned as Chairman of Proton.
.

I was not expelled by Proton management or owners. I decided on my own, for the sake of Proton I should leave. I therefore have no grudge against Proton nor do I want it to fail after I left.

This is because Proton seems to be having difficulties with the Government and for some unknown reason sales of Proton cars have plummeted.

I know I am persona non grata with the Government. I do not want to be the cause of Proton’s inability to recover because of my presence.

I would in fact like to see Proton recover and do well.

So, please, Proton owners and buyers, don’t take it out on Proton because I am no longer the Chairman. Please continue to support Proton.

Proton cannot expect any help from the Government.

Only Proton owners and fans can help Proton. So please help Proton, your national car maker.

1. I am no longer the Chairman of Proton. However I feel a need to merely state the facts.

2. Firstly Proton is now privately owned after it was bought at RM5.50 per share (originally priced RM2.95 but bidding pushed the price up) largely from Khazanah and a few other share holders. Khazanah was supposed to hold shares for Bumiputras but is now representing the Government. Proton is not a GLC (Government Linked Company).

4. The Government claims to have provided grants, various forms of assistance as well as tax foregone to the take of about RM 13.9 billion in total.

Clearly Proton has paid more to the Government than Government to Proton.
Capital injection by Government in 2 seed funds total RM 400 million. These have been fully paid up. On top of this, Proton had fully funded the 1.8 billion Ringgit Tanjung Malim Plant from its internal coffers which at that point had a staggering total of 4 billion Ringgit.

6. In addition Proton provides jobs for about 12,000 workers at any one time directly, and more than 250,000 souls indirectly. Proton reduced the outflow of funds probably amounting to more than 100 billion Ringgit.

8. We can forget the development of engineering capability as our policy now is to encourage imports.

9. Incidentally all the countries exporting cars to Malaysia implement tariff and non-tariff barriers resulting in excluding Proton importation into their countries. This contrasts with our policy of allowing foreign cars to enter Malaysia with minimal or no restrictions.

11. These companies can afford to lose on their cars in Malaysia and recoup in other markets. Apart from economy of scale, Proton cannot access foreign markets except those of poor countries with low Total Industry Volume.

12. Today the Government has no pride in national products. Imports are cheap and there are more consumers than producers. In democracy numbers count. So pleasing the more numerous is more important than national capacity of develop. 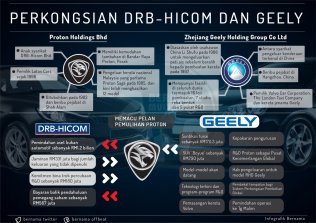 Another point am trying to confirm~Gov will be paying PROTON about a billion post transaction.

Like Loading...
This entry was posted in Uncategorized and tagged geely, geely buys proton, mahathir, mahathir and proton, proton. Bookmark the permalink.