Posted on September 21, 2014 by weehingthong

To them, it is an honour but…Would you like a monkey named after YOU? 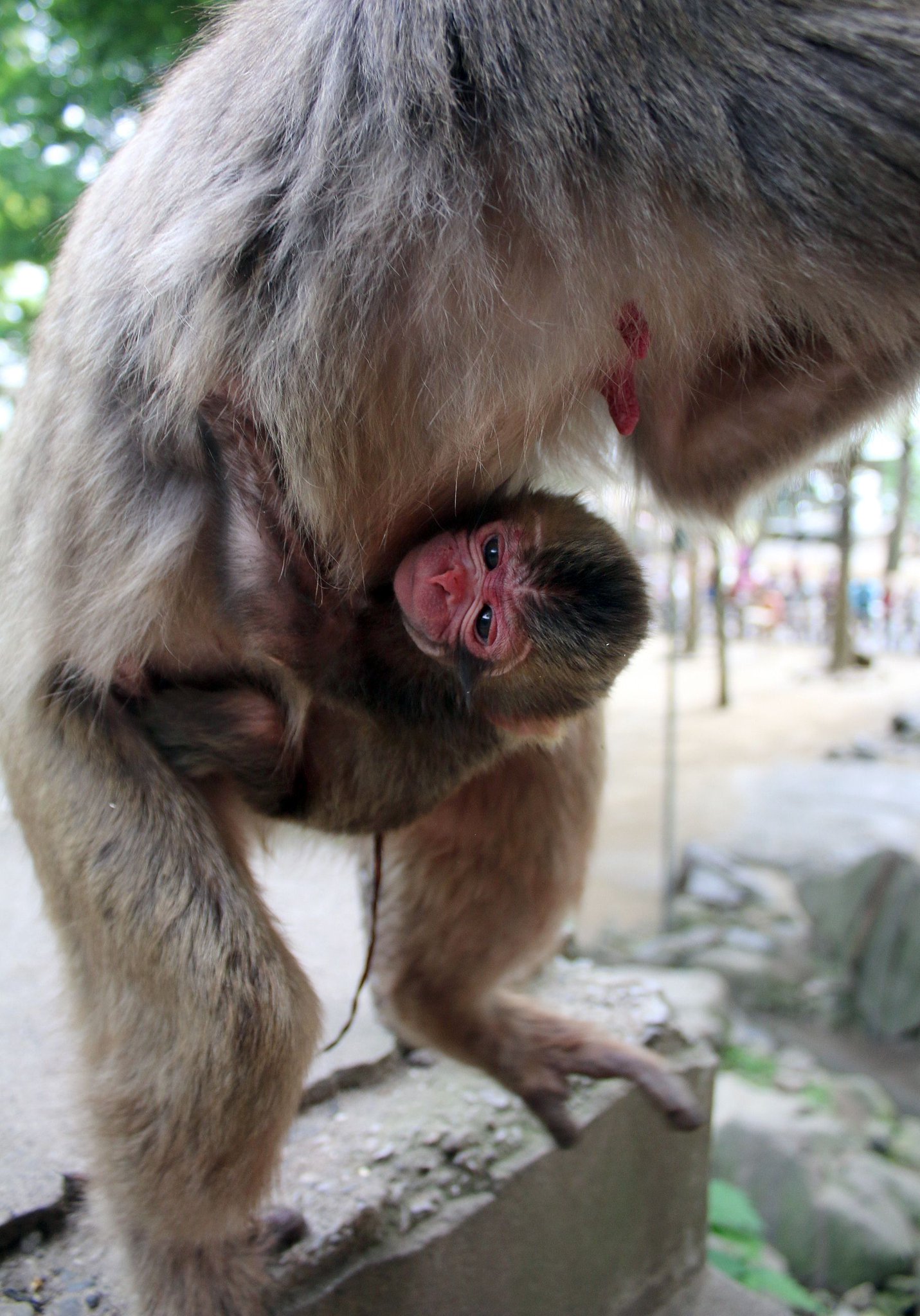 TOKYO (AFP) – A Japanese zoo that caused a furore by naming a baby monkey after Britain’s Princess Charlotte has been told to stick to its guns by the local mayor after two days of fraught debate.

Mount Takasaki Wild Monkey Park in Oita was flooded with complaints after announcing Wednesday that the public had voted for a newborn macaque to be called Charlotte, just days after Britain’s royal family named its newest member.

“Initially opinions were mostly complaints saying it is disrespectful to the British people, then voices supporting the name began to increase, with some saying it was okay because the baby monkey is cute,” an official in Oita, south-western Japan, said.

As the controversy raged online, on television and in the newspapers, local officials even sought the opinion of the British embassy in Tokyo – who offered no comment – before Mayor Kiichiro Sato ended the confusion with a definitive ruling. “I think the public gave it the very pretty name Charlotte, and I don’t think there is any problem with it, so we’ll go with Charlotte,” Mr Sato told reporters. – 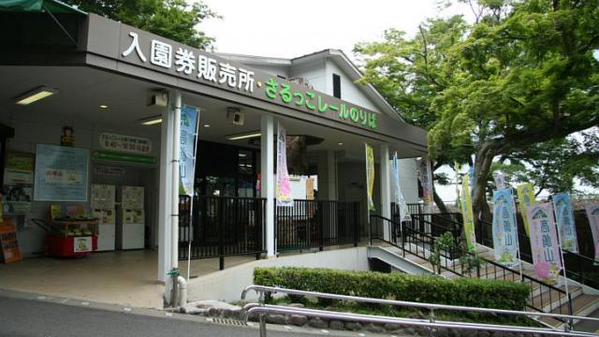 The Takasakiyama Natural Zoological Garden, known for its wild macaque monkeys, has apologised for naming a baby monkey Charlotte in an ill-advised tribute to the newborn British princess. — PHOTO: SCREENGRAB FROM TAKASAKIYAMA.JP
—
By Lee Min Kok

A zoo in south-western Japan landed itself in hot water when it named a baby monkey Charlotte, in an ill-advised tribute to the newborn British princess.

The Takasakiyama Natural Zoological Garden, known for its wild macaque monkeys, has since apologised on its website after backlash from the public.

The Japan Times reported that the attraction has a habit of seeking public input in naming the first macaque born each year. Charlotte was apparently the top choice with 59 out of 853 votes, with Kei (after Japanese tennis player Kei Nishikori) and Elsa (a prominent character in the hit animated Disney film Frozen) also considered.

The name was inspired by Charlotte Elizabeth Diana, the second child of Britain’s royal couple Prince William and his wife Kate. She was born on May 2.

The British Board of Film Censors (BBFC) has introduced tougher rules for DVDs sold in shops.

Spanking, caning, penetration by any object “associated with violence”, physical or verbal abuse, physical restraint and female ejaculation were among the acts to be banned from online productions. 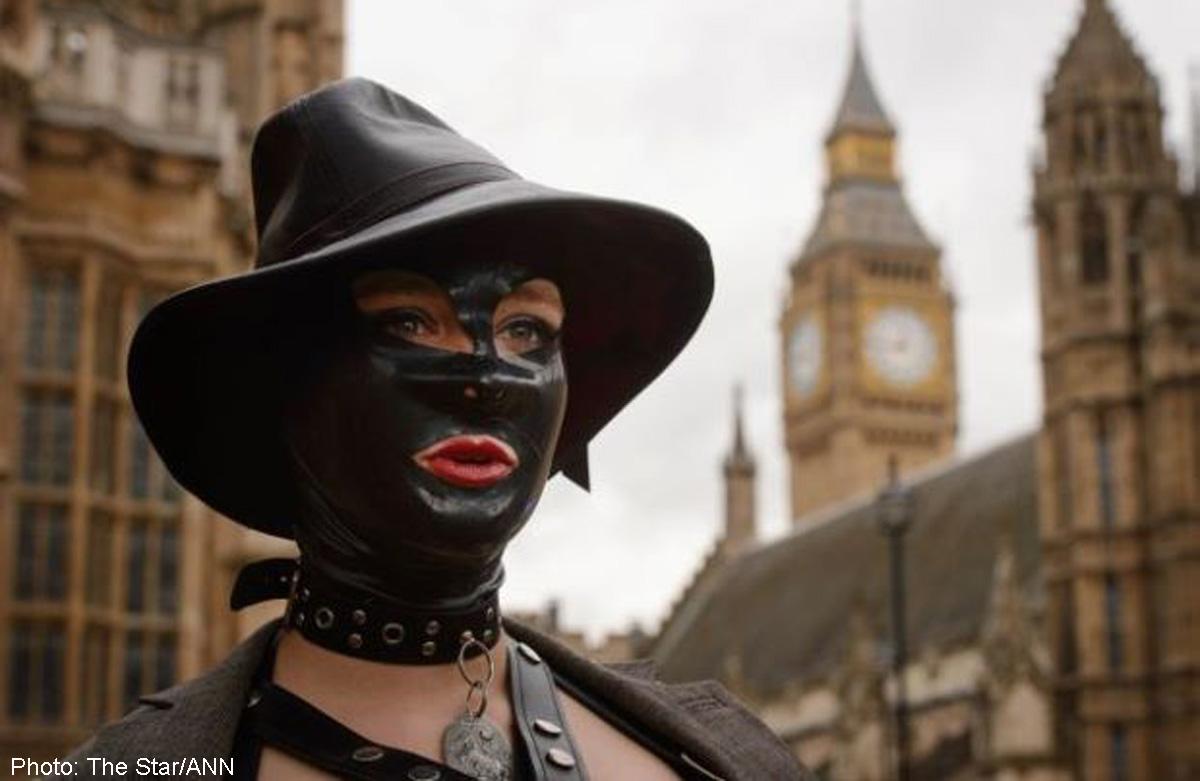 LONDON – Campaigners in favour of hardcore pornography staged an unusual “face-sitting” protest outside the British parliament on Friday against new rules banning a series of extreme sex acts from online videos.

Around 20 fully clothed couples simulated sex on the lawn in Parliament Square, with women in black leather boots sitting astride the men’s faces.

They were protesting an amendment to the Communications Act requiring video-on-demand online pornography to follow tougher rules, already laid out by the British Board of Film Censors (BBFC) for DVDs sold in shops.

Britain’s Department of Culture, Media and Sport claims the 2014 Audiovisual Media Services Regulation, introduced on December 1, will crack down on “harmful content”.

But it has been attacked as sexist and an attack on freedom of expression by several campaigners.

About 20 couples gathered to protest the legislation outside Britain’s Parliament today.

Today in central London, an episode of Monty Python leaked out of the BBC Archive: http://www.buzzfeed.com/jimwaterson/are-you-sure-we-can-publish-this-on-the-site … #PornProtest

We Went To The Mass Face-Sitting Protest Outside Parliament

British banks’ rotten culture has cost them S$78.6 billion in fines and payouts

LONDON (Reuters) – Bad behaviour that has cost British banks £38.5 billion (S$78.6 billion) in fines and compensation over the past 15 years will take a generation to fix, an independent think tank said on Tuesday.

Britain’s banks have been hit by scandals ranging from the attempted manipulation of foreign exchange and benchmark interest rates to the mis-selling of loan insurance and complex interest-rate hedging products.

A report into the culture of British retail banking by think tank New City Agenda and Cass Business School said that an aggressive sales culture took hold over two decades, with some branch staff receiving cash bonuses, iPods or even tickets to the Wimbledon tennis tournament for hitting sales targets.

“A toxic culture which was decades in the making will take a generation to turn around,” said Conservative lawmaker David Davis, chairman of New City Agenda. “At this critical juncture, Britain’s biggest banks cannot afford to let the better treatment of customers become a second-order priority.” 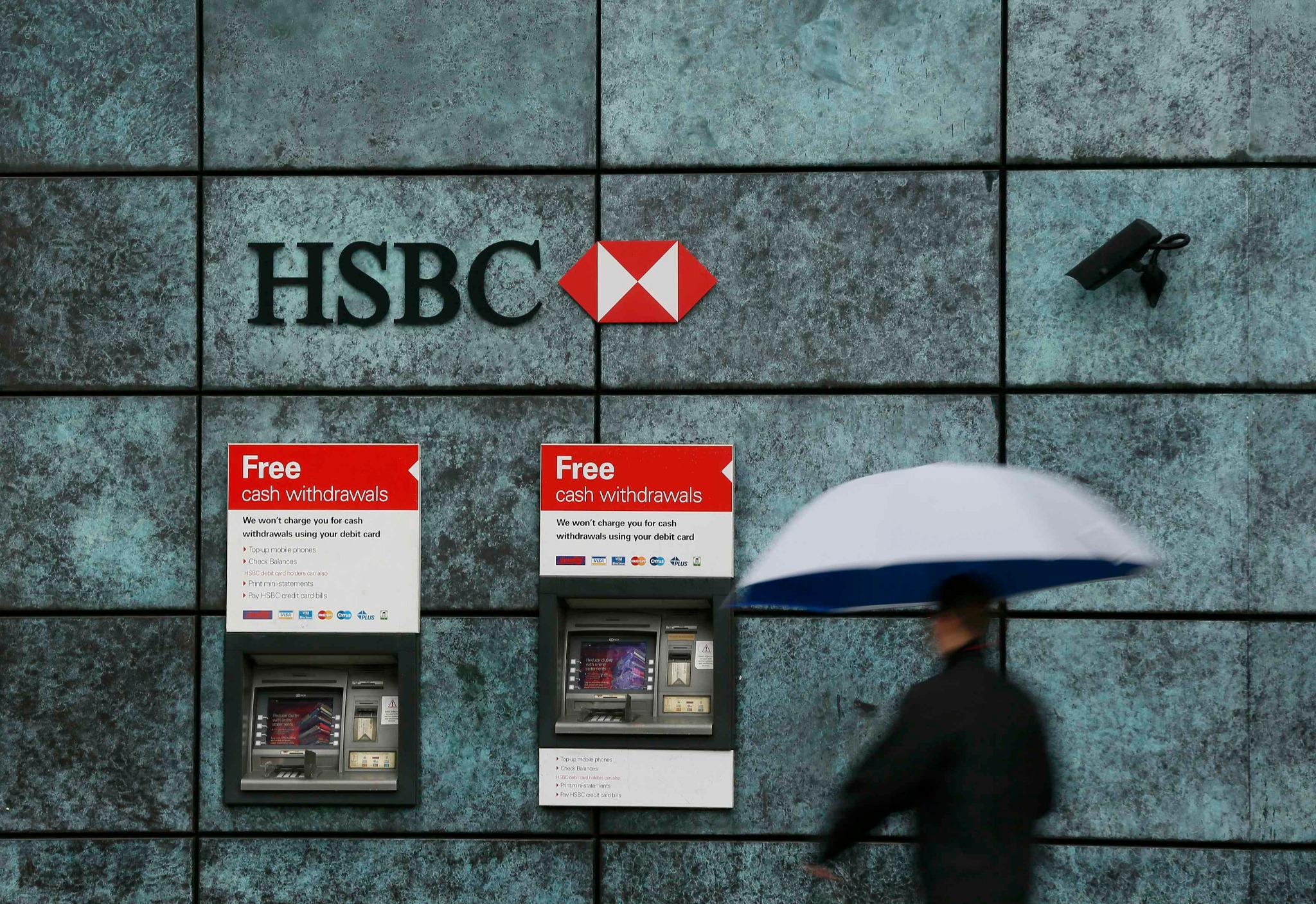 The alleged leak is believed to have taken place in March 2010, when HSBC was advising British insurer Prudential on a major acquisition and was working on a related multibillion-dollar currency transaction, the Journal reported.

THIS IS THE SCENE of the five-star Churchill Hyatt Regency Hotel in London after a gas explosion! 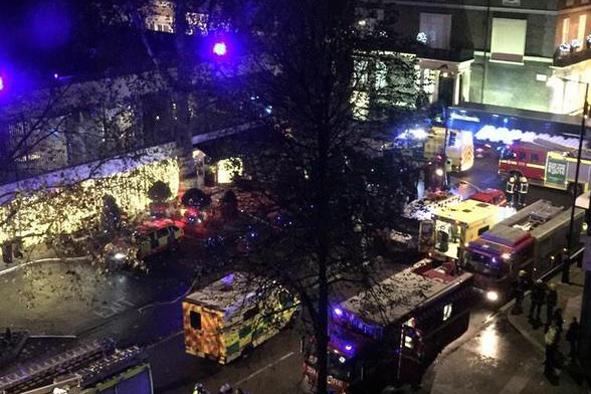 Gas explosion: the scene after the blast in Portman Square (Picture: Twitter/@PoliceHour)

An investigation was today underway after 500 guests were evacuated and 14 people were injured in an explosion at a top central London hotel.

Around 80 firefighters attended after emergency services were called to the scene in Marylebone at around 11.40 on Friday night.

Police said all of the guests are now accounted for.

Five people needed hospital treatment and nine others were checked over at the scene and given the all-clear.

Workers from the National Grid were on the scene today trying to pinpoint the cause of the blast.

500 guests evacuated from top London hotel after a gas explosion in the basement, injuring 14. 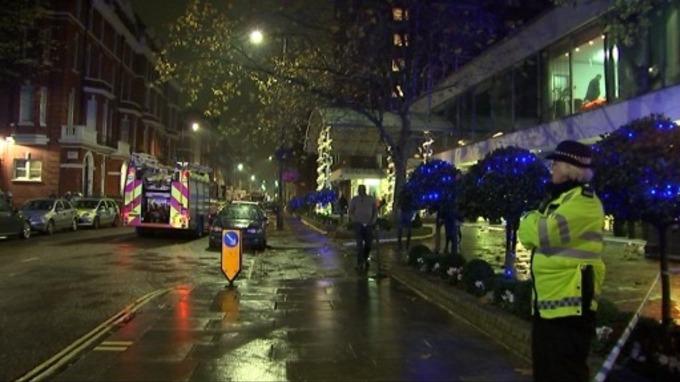 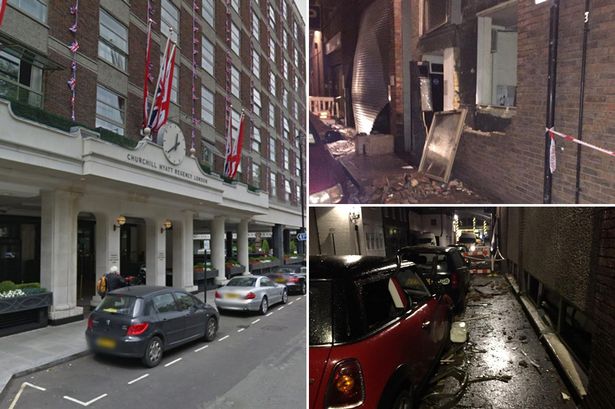 THIS WAS THE HOTEL BEFORE THE BLAST

Bus can travel 186 miles on one tank of gas

The first bus in Britain powered entirely by human and food waste has made its first journey today.

Bio-Bus, a 40-seater shuttle service between Bath and Bristol Airport, can travel up to 186 miles on just one tank of gas.

Gas is generated through the treatment of sewage and food waste deemed unfit for human consumption.

The annual waste generated from one bus load of passengers would provide enough power for a return trip from Land’s End to John O’Groats.

The bus, which has spawned a number of appropriate nick-names, including the ‘number two bus’ , is being hailed as a sustainable way of fuelling public transport while improving urban air quality.

The gas used to run the bus is generated at the Bristol sewage treatment works, which is run by GENeco, a subsidiary of Wessex Water.

The Telegraph ‏@Telegraph 7m7 minutes ago

Two men killed in London balcony collapse believed to be removal men who were moving a sofa http://fw.to/k0JAvFj 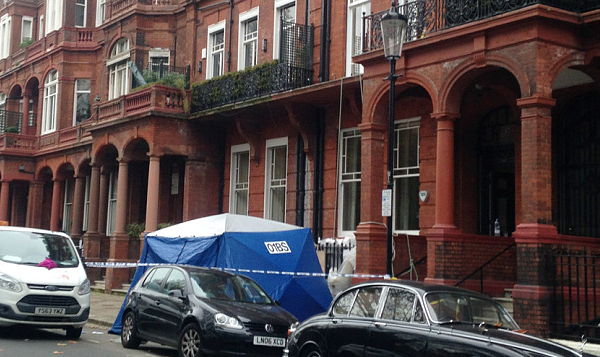 Two men have died after a balcony collapsed at an exclusive London address.

Three ambulances, the London Air Ambulance and the LAS Hazardous Area Response Team were called to Cadogan Square in Knightsbridge at just before 10am.

Eight people were injured, including a man who died at the scene. Another man, whose age is also unknown, was taken to a St Mary’s Hospital in Paddington in critical condition where he later died.

The two fatalities are thought to have been removal men, who walked on to the balcony while moving a sofa.

Local MP Greg Hands wrote on Twitter that he had been told that the combined weight of the removal workers may have caused the balcony to collapse. The 157 bus exploded on Tuesday afternoon

A London bus has exploded and thrown debris across a south London street.

The blaze happened at the junction of Stafford Road and Sandy Lane in Wallington, at 14:00 GMT on Tuesday.

The driver of the 157 bus pulled over to the side of the road and got the passengers off as smoke emitted from the rear of the bus, police said.

London Ambulance service treated one person for shock. Initial reports indicated the fire was not suspicious, the Metropolitan Police said.

“There was an explosion on the bus which threw debris from the bus across the road,” the Met added.

The Guardian ‏@guardian 2m2 minutes ago

Six people arrested on suspicion of terrorism http://gu.com/p/42dt6/tw  via @guardian

Counter-terrorism police have arrested three men and three women from Portsmouth, Farnborough and London on suspicion of plotting, or helping to plot, terrorism abroad.

A 48-year-old woman and a 57-year-old man from Portsmouth were arrested on suspicion of failing to disclose information about acts of terrorism. The man is also suspected of the preparation of terrorist acts and of arranging money and property for use in terrorism.

Ali Spagnola and 2 others followed 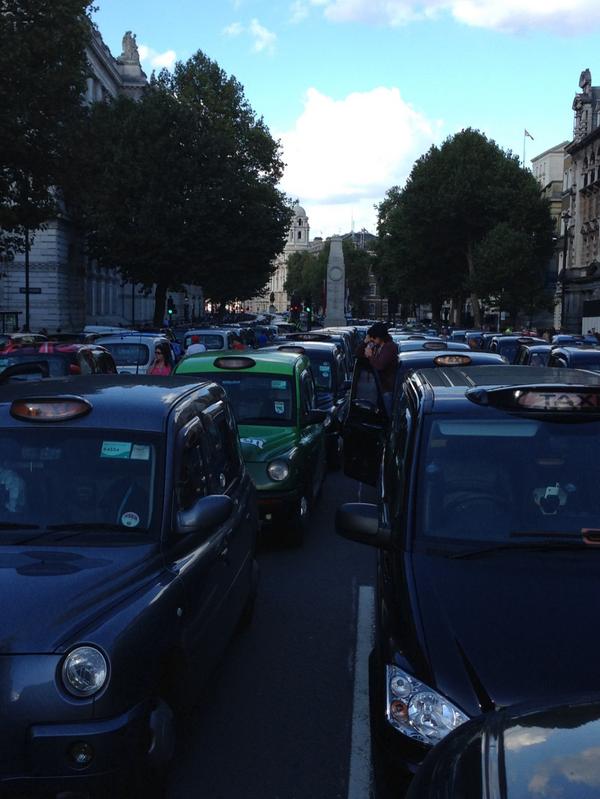 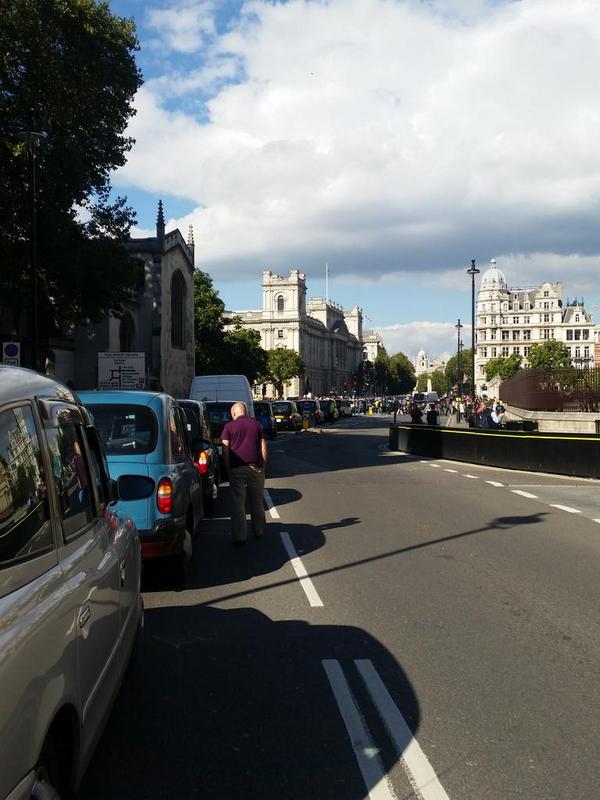 London (AFP) – Hordes of traditional London taxi drivers clogged up the city centre on Wednesday to protest against a boom in unlicensed minicabs and rickshaws prowling the streets.

Birmingham, UK – Woman assaults driver in road rage row – surely someone can identify her from these images? http://dailym.ai/1v2Jeyc

The attacker, described as a white woman in her early 20s, threw her victim aggressively to the ground twice in an unprovoked attack outside a grocery store in Handsworth Wood, Birmingham.

Shocking moment woman jumps out of a car, grabs another driver by her hair and violently assaults her in road rage row over parking Young woman assaulted her 44-year-old victim in unprovoked attack Threw her aggressively to the ground twice as pedestrians looked on Attacker had been parked in the middle of the road and reacted angrily when she was asked how long she would be.

This shocking moment shows how a woman grabbed an innocent motorist by the hair and violently assaulted her in the street in the middle of the day after a road rage row over parking.

The attacker, described as a white woman in her early 20s, storms angrily over to her unsuspecting victim before throwing her down into a box of fruit in front of a grocery store.

The assailant then holds her down and shouts at her, before pushing her hard onto the kerb when she tries to escape.
The woman continues to harass her 44-year-old victim when she finally gets to her feet, while a group of people watch on without stepping in.

Judge says gang preyed on five girls, aged between 13 and 15, partly because they were from different ‘community and religion’.

Nine men jailed for a total of 77 years as police prepare to arrest four more.

As many as 47 vulnerable girls were plied with alcohol, gifts and money.

They were then passed around for sex with ‘several men a day.

At least one victim forced to have sex with 20 men in one night, police say