Our Airlines and our Airplanes

The baby of an Australian woman who went into labour aboard a Malaysia Airlines flight, forcing an emergency landing in Bali, did not survive, doctors say.

The baby of an Australian woman who went into labour aboard a Malaysia Airlines flight, forcing an emergency landing in Bali, did not survive, doctors say.

Flight MH135 from Kuala Lumpur to Brisbane requested a priority landing in Denpasar on Friday about 2.10pm local time.

An Australian woman was rushed to Kasih Ibu Hospital.

Head of medical services Diah Ratna Dewi says when the patient arrived, the baby of around 24 weeks had already been delivered and was deceased. 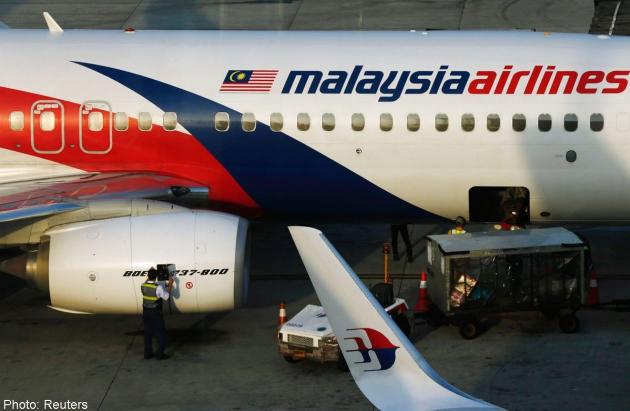 JAKARTA, Indonesia – Malaysia Airlines flight MH135 from Kuala Lumpur to Brisbane made an emergency landing at Ngurah Rai International Airport in Bali after a passenger apparently went into labour.

According to Herry A.Y. Sikado, Angkasa Pura I general manager at Ngurah Rai, MH135 landed safely at the airport at around 2.10pm, after it requested a diversion from its original route.

The flight landed with all 178 passengers safe.

MH198 to Hyderabad forced to turn back shortly after take off: A Malaysia Airlines flight from Kuala Lumpur to… http://dlvr.it/6vML0Q

Followed by MikeyMouse and 5 others

MAS MH198 to Hyderabad forced to turn back, emergency landing in KLIA http://www.themalaymailonline.com/malaysia/article/mas-mh198-to-hyderabad-forced-to-turn-back-emergency-landing-in-klia … via @sharethis 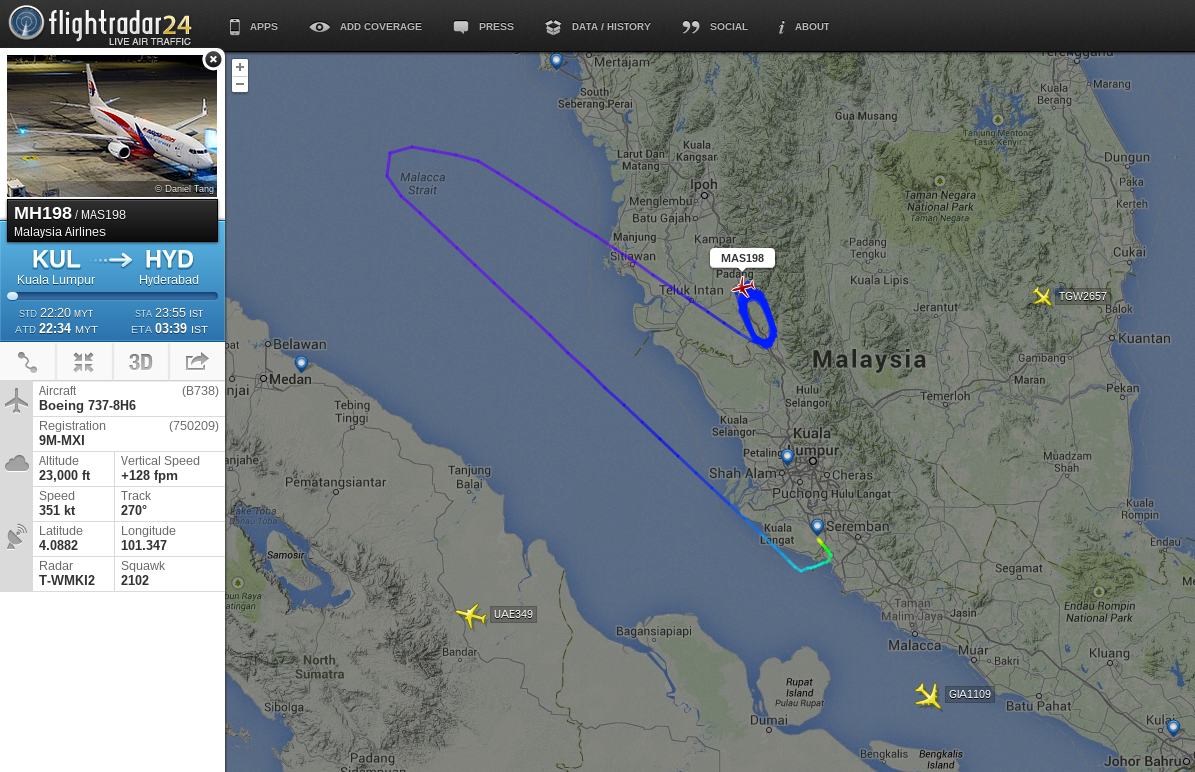 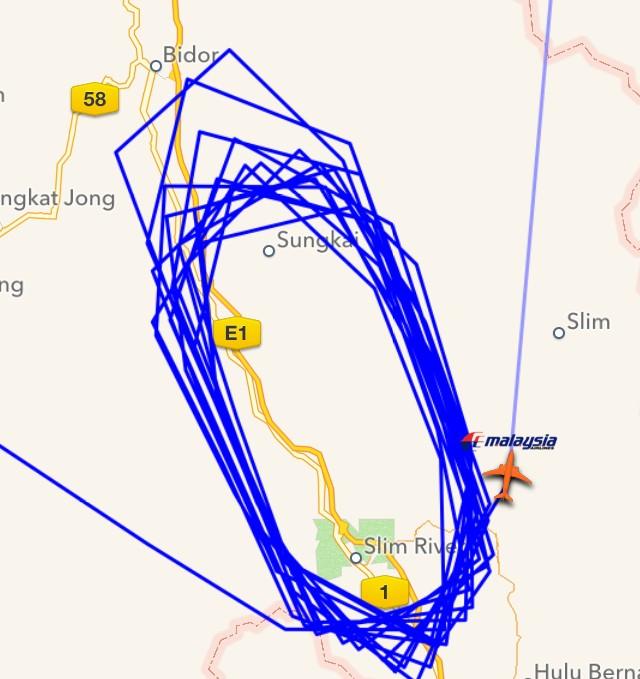 KOTA KINABALU: A MASwings ATR 72-500 aircraft with 59 passengers and crew onboard landed safely in Labuan after parts of one of its engines fell off during take off.

MASwings in a statement said that MH3041 heading for Labuan had departed Kota Kinabalu International Airport at 7.30am, Thursday adding that the aircraft’s pilot had realised upon descent that one of its two engines had developed a “technical anomaly”.

“All necessary procedures were executed as the  plane made its landing at 8am,” the company said.

“It was found that the number two engine’s inboard cowling board had detached itself and was found on the runway at Kota Kinabalu International Airport,” the statement added.

Malaysia Airlines faced another accident today when one of its B737-800 was hit by an airport baggage vehicle while it was parked at the tarmac today.

Photos sighted by Malaysiakini of the incident at the Kuala Lumpur Airport showed a rip on the underside of the aircraft body.

Confirming the incident, MAS said that the airport baggage vehicle “hit the fuselage of the aircraft” resulting in damage.

MAS hit by yet another plane mishap
http://www.themalaymailonline.com
KUALA LUMPUR, June 3 — Malaysian Airlines (MAS) was forced to ground one of its Boeing 737-800 today in the latest incident since the disappearance of Flight MH370, when an airport baggage vehicle crashed into the parked plane. The flag carrier

MAS said in a statement the aircraft experienced a lightning strike during the flight.

“The aircraft was then immediately inspected and was subsequently released for service.

“The aircraft has arrived in Kuala Lumpur and continued its series of scheduled services without any problems.

“Malaysia Airlines’ aircraft are designed to withstand lightning strike and dissipate the electrical charges through the aircraft bonding system safety.

The photo which a passenger posted on his Instagram account after a minor explosion of the engine on the left wing of MAS flight 1438 from Kuala Lumpur to Langkawi today. – May 20, 2014.

Small sparks caused by an explosion on the left engine of Malaysia Airlines flight MH1438 while it was 20,000 feet off the ground, caused panic among passengers on board a flight bound for Langkawi today.

A passenger with the user name Haswendy shared his experience and a picture of the plane engine on his Instagram page.

He said the incident occurred 10 minutes before the plane touched down at the Langkawi International Airport.

“I had a traumatic experience during our flight from KLIA to Langkawi just now. One of our flight MH1438 left engine had a light explosion that caused small sparks.  Few of the passengers were startled and few were crying.

“Alhamdulillah we landed safely,” said Haswendy, who was travelling with another friend.

He said he was talking to his friend when he heard an explosion and saw sparks coming out from one of the engines while at the same time, the lights in the plane went off for a few seconds.

He said passengers seated behind him were crying.

PERODUA VIVA GOES UNDER MAS MH740! It’s ok, the plane was not moving!

PUTRAJAYA: Malaysia Airlines (MAS) has retimed its MH740/741 flights after the aircraft’s belly was hit by an airside vehicle at the Kuala Lumpur International Airport (KLIA) today.

The B737-800 aircraft was scheduled to depart to Yangon (Flight MH740) at 10:05am but due to the incident, passengers were transferred to a different aircraft which took off at 10:45am the same day,  MAS said in a statement here.

PUTRAJAYA: Malaysia Airlines (MAS) has retimed its MH740/741 flights after the aircraft’s belly was hit by car at the Kuala Lumpur International Airport (KLIA) on Thursday.

The B737-800 aircraft was scheduled to depart to Yangon (Flight MH740) at 10:05am but due to the incident, passengers were transferred to a different aircraft which took off at 10:45am the same day, MAS said in a statement here.

The airline said the driver of the vehicle which belongs to a vendor had been immediately reprimanded.

The plane that crashed in a residential area!

Principal of the flying school, Capt Mohd Shahrin Abu Hassan said he could not provide new information on the incident.

“I believe that the Piper Warrior II had engine problems,” he told Bernama when contacted, Tuesday.

Trainee pilot M. Shankar, 20, was hurt in the leg and head when the aircraft crashed in an open area at 12.30pm on Monday.

by syed azhar AND c.a.zulkifle

Crash site: A crowd gathering around the aircraft after it crashed at Taman Kurnia Jaya  in Pengkalan Chepa.

*MAS Flights: Hit by minor incidents that could undermine confidence..

1. MAS Flight MH066 to Seoul had to be diverted to Hong Kong after an electrical fault.
2. MAS FLIGHT MH114 TO KATHMANDU, NEPAL hits a flock of ducks but is fine.

*MAS flies into a bleak future

FlyFirefly Sdn Bhd, operating as Firefly, is a full-service point-to-point carrier and a full subsidiary of Malaysia Airlines

Firefly flight bound for Kota Baru forced to turn back

GEORGE TOWN: A Firefly flight bound for Kota Bahru was required to turn back to Penang International Airport, less than half an hour after departing at 6.55am Thursday.

A media statement issued by the airlines said flight FY1002, a code share with Malaysia Airlines flight MH9948, was forced to turn back due to technical difficulties.

Firefly flight forced to turn back shortly after take off

KUALA LUMPUR: Firefly Airlines flight FY1002/MH9948 bound for Kota Baru from Penang at 6.55am this morning had to perform an air turn-back shortly after taking off due to technical problem.

The airline in their official statement said the aircraft’s landing gear was unable to retract after being airborne and had force to turn back to Penang International Airport (PIA) 15 minutes later.

“The aircraft had landed safety at 7.30am and all 64 passengers and 4 crew members on board were safe.

“The flight’s schedule was retimed and departed from PIA at 8.50am and arrived safety in Kota Baru at 9.50am today,” the statement said.