Himpunan Hijau 2.0: Langkah Lestari
Liked · about an hour ago

After months of aggressive campaigning, environmental group Himpunan Hijau has finally collected its targeted one million signatures in a bid to demand the closure of Lynas’ rare earths processing plant in Gebeng, Kuantan.
…

A celebration broke out at Dataran Merdeka last night after Wong Tack declared that they have finally garnered the one million signatures after 36 days of staking out at the historical square.

Green group days away from getting 1million signatures against Lynas

Green activist group Himpunan Hijau say they’re only days away from meeting their target of 1 million signatures against the Lynas rare earth plant in Pahang.

While the support has been encouraging, Wong Tack was disappointed that the deputy minister of science and technology Abu Bakar Mohamad Diah described the plant as being as safe as a kicap factory after he visited the plant himself.

KUALA LUMPUR (Sept 26, 2013): Science, Technology and Innovation Deputy Minister Datuk Abu Bakar Mohamad Diah lost his cool and got into a scuffle with an anti-lynas group at Parliament when trying to defend the Lynas rare earth plant.

After receiving the memorandum from Fuziah Salleh (PKR-Kuantan) and several representatives of the Gebeng residents at Parliament lobby today, Abu Bakar kept guaranteeing that the plant was “safe”.

“The Lynas factory is as safe as a “kicap” factory.
…

He became defensive when Save Malaysia, Stop Lynas chairman Tan Bun Teet, who is also a resident in the area raised questions on the permanent disposal facility (pdf) and environmental issues that have not been addressed.

“Why are you defending Lynas? Just answer our questions,” Tan said.

“I have to protect it because the Atomic Energy Licensing Board issued a temporary operating license (TOL) to Lynas.

“And the board comes under my ministry. So I have to protect it!” Abu Bakar said, raising his voice as he shoved the representatives.
…

The dispute led to both parties shoving each other.

Deputy Science, Technology and Innovation Minister Datuk Dr Abu Bakar Mohamad Diah found himself in hot water after declaring the Lynas rare earth plant in Gebeng, Kuantan, to be “as safe as a ketchup (kicap) factory”.

Abu Bakar’s reply, which was viewed as a mockery by representatives of the anti-Lynas group and several opposition lawmakers, sparked off a heated argument between them and Abu Bakar, who was fumbling through his notes as he looked for answers.

In the midst of the argument, he made another revelation: “I have been in this job for only three months and I need to understand and read up on the chronology of the events on Lynas.”

He found himself in more trouble after revealing that he had visited the plant only once and found the operations safe.

“How can you call this project safe after visiting it only once? We have been living with it for more than two years,” Tan Bun Teet, chairman of activist group Safe Malaysia, Stop Lynas (SMSL) shouted.

Another resident then advised Abu Bakar to “do his homework” before talking like an expert on the plant.

He then offered to organise an all-expenses paid trip to the plant.

Himpunan Hijau will submit the signatures in a petition to the Agong to seek his intervention against Putrajaya’s approval for the plant to operate in Gebeng, Kuantan.

Himpunan Hijau has passed the 800,000 mark in its quest to collect 1 million signatures from those who want the Lynas’ rare earths refinery to be closed down.

Chairperson Wong Tack said in a statement that the movement expects to reach its target “any day now”.

“We are already so close … If 2,000 citizens step forward and collect 100 signatures each, we will achieve out goal,” he said.

“Let’s complete this mission in the highest spirit so that we can move on to the second (mission), that is to work with international NGOs to close down Lynas.”

“We are already so close. Only 100k++ to go. We could achieve our goal of a million any day from now. As I’ve always said, we need many people to get involved. If 2000 committed citizens step forward now, and collect 100 signatures each, I can be back home for mooncake festival.” Wong Tack. 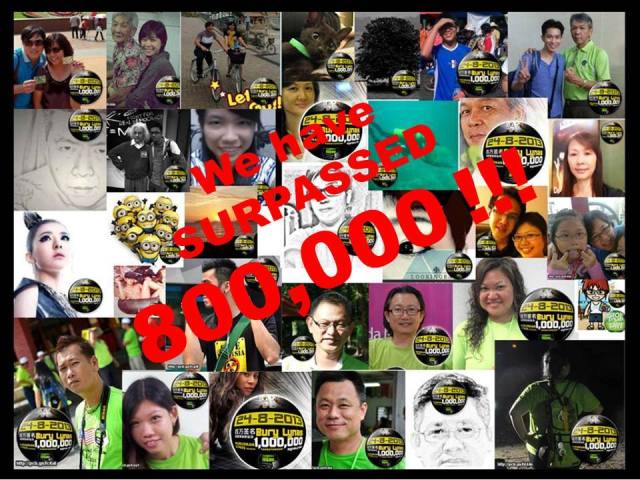 It has fallen short of its target by over 100,000 signatures.

PETALING JAYA: Himpunan Hijau strongly urges members of the public that are still holding on to their signatured forms to return it back to the movement as it nears its target in achieving a million copies to stop the highly controversial Lynas plant. The green movement had previously targeted by yesterday to achieve in drawing support from a million people in its long-drawn battle to boot the Australian miner from Malaysia
…

“We unfortunately didn’t meet our target yesterday but we are coming close. We have crossed over 800,000 signatures last night, so there are 100,000 plus to go,” he said.

Wong then urged those who have possession of the forms – “whether they took it from us physically, or downloaded it on the website” – to return it to the movement for the tallying of numbers.

“We know there are 30,000 forms out there, 10,000 downloaded and 20,000 handed out. We urge the people to return whatever they have because at any moment we will reach a million,” Wong said, explaining that one form could hold 100 signatures. 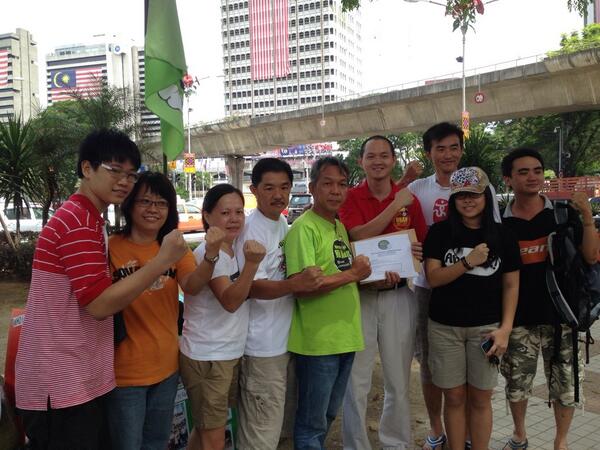 PETALING JAYA: The fight to stop the Lynas rare earth refinery plant in Kuantan is almost at its end as Himpunan Hijau aims by Monday to achieve its target of drawing support from a million people in its  long-drawn battle to boot the Australian miner from Malaysia.

Himpunan Hijau chairman Wong Tack told FMT that his organisation has since collected over 700,000 signatures from campaigns all over the country, and that there was currently 16 stations set up across Malaysia.

“So far more than 10,000 participants have downloaded our form online, are supposed to help collect 100 signatures each,” he disclosed.

“If all the so-called green leaders come forward and exercise their duty, then I am confident we are able to achieve our target by Monday,” he added.

FMT met with Wong during the Malaysian Olympic Council’s (OCM) Fun Run Sunday morning, where he managed to collect close to 30,000 signatures from runners and the general public.

The government does not care about the ongoing effort by Himpunan Hijau to collect one million signatures in its petition against the Lynas rare earth plant in Gebeng, said Science, Technology and Innovation (Mosti) Minister Ewon Ebin.

Asked would the government listen to appeal of one million people should Himpunan Hijau campaign reach its target, Ebin (right) answered briefly, “we don’t care.”

“We (the government) don’t care… we don’t care what they say. We just need to answer (to questions on Lynas) in Parliament,” he said.

Ebin made the remarks during a press conference in Putrajaya today after meeting with South African Science and Technology Minister Derek Hanekom.

Himpunan Hijau targets 10% of one million signatures from Sabah

KOTA KINABALU: The fight to stop Australia’s Lynas rare earth refinery plant in Kuantan continues as Himpunan Hijau set out to campaign for one million signatures in 100 days where Sabah is expected to contribute 10 per cent of the number.

In order to meet the target, 1,000 individuals in Sabah are expected to volunteer as ‘green leaders’ to collect 100 signatures each, which will then be combined with signatures from across the nation and form a petition to be submitted to the highest authority in the country, the Yang Dipertuan Agong, the Malaysian parliament, the Australia High Commission, the Embassy of Japan, and financial institutions that support Lynas.

A student volunteer, Wong Chiu Lin who led a press conference held at Kinabalu Daya Hotel here yesterday, disclosed that the campaign was also dubbed ‘mission impossible’ as there had never been a petition in the country that managed to reach as many as one million signatures.

She called on the people of Sabah to come together with the rest of Malaysia to support the event
Read more: http://www.theborneopost.com/2013/07/25/himpunan-hijau-targets-10-of-one-million-signatures-from-sabah/#ixzz2aCRUmmv

The environmental group Himpunan Hijau has announced that it plans to collect a million signatures and hold a massive gathering in October in Kuala Lumpur to continue its protest over the Lynas’ rare-earth factory in Kuantan, Pahang.

The height of its campaign, according to the group’s president Wong Tack, is on Aug 24 when 10,000 volunteers will work on collecting signatures.

“The campaign starts on Aug 1 and in 100 days, we should collect that one million signatures,” said Wong.

“A week before our country’s 56th year of independence, as many as 10,000 channels will be opened to allow the people to submit their signatures,” said Wong at a press conference at the Chinese Assembly Hall.

In the event that the government takes no further action, Wong said the group would organise a Himpunan Hijau 2.0 rally in October as a sign of protest.

“October is the best time since there are many festive celebrations in August and September,” he said. – July 22, 2013

Anti-Lynas campaigner Wong Tack to sit under a tree

Himpunan Hijau leader Wong Tack has vowed to sit under a tree at Dataran Merdeka  until the movement’s petition goals are met with regard to the Lynas Advanced Materials Plant.

Speaking at a press conference today, Wong said he will park himself under the three starting Aug 24 when Himpunan Hijau kicks off its million signatories petition against the plant in Gebeng, Kuantan.

Anti-Lynas campaigner Wong Tack to sit under a tree 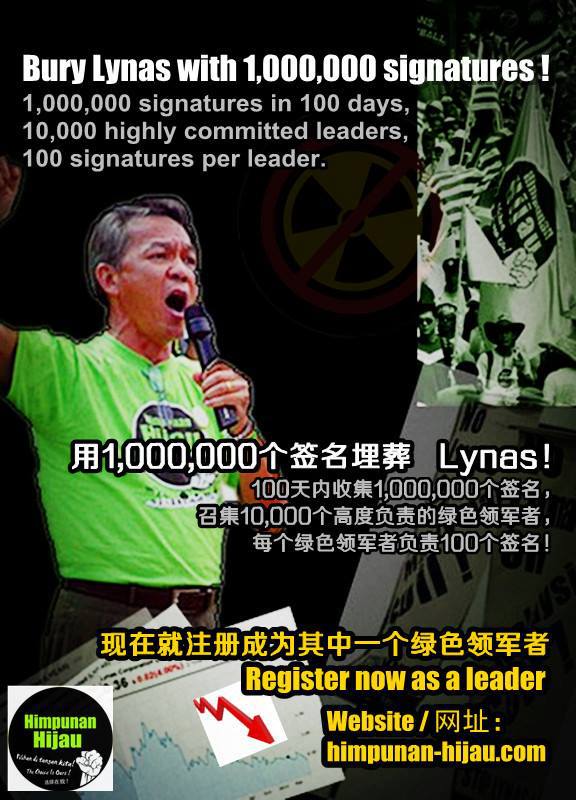 TOGETHER, we CHALLENGE the MISSION IMPOSSIBLE.With the strongest commitment and the most intense emotion, the RAKYAT will demonstrate the power of the people in fighting environmental injustice. Let the government and the world know!10,000 leaders are needed. Register now as a leader to be a part of this extraordinary effort. Registration closing date: 30 July 2013.REGISTER HERE —>>>http://www.himpunan-hijau.com/“1,000,000个人民意愿签名埋葬Lynas！”在100天内收集1,000,000个签名，
召集10,000位高度负责任的绿色领军者。
每位绿色领军者负责100个签名！让我们在一起，共同挑战这不可能的任务！以最堅定的承諾、最剧烈的激情，我们要让政府和全世界都知道，人民的力量将再度挺身对国土环境的不公；不义！10,000位绿色领军者大召集！
现在就注册成为其中一位绿色领军者，参与这项意义非同寻常的行动。报名截止日期：2013年7月30日。
—

PRESS STATEMENT, 12 JUNE 2013
Himpunan Hijau : We are determined to fight on. I million signatures will be collected in 100-daysHimpunan Hijau is determined to continue the struggle to bring down Lynas. In a meeting held in Kuantan last Monday, the Himpunan Hijau steering committee has decided to carry out a signature campaign. “The sentiment on the ground is still very strong. People are still determined to stop Lynas,” said the chairperson of Himpunan Hijau, Wong Tack.Wong Tack added, “Our committee has proposed to collect 1 million signatures in 100 days. Once collected, we will appeal to the highest authority of this land, the Yang di-Pertuan Agong to step in to protect the wellbeing of this country and its people.”“A special task force will be set-up to put forth a work plan within the next 30 days. We will announce the details in due course.”The Pahang Menteri Besar, Adnan Yaakob had said that the general election will be the referendum on the Lynas Advanced Materials Plant (LAMP) for the people of Kuantan. The results of GE13 in Kuantan have clearly proven that the people not only reject the LAMP but also the Barisan Nasional government who supports Lynas.Our Prime Minister has also said that the Lynas project will be scrapped if the people will not accept it. But yet, after so many himpunans, there is still no sign that the Prime Minister is going to keep his words.“We strongly believe that Malaysians will continue this fight with the highest intensity. The operations of Lynas have violated countless laws and procedures. Massive irreversible toxic destructions are taking place right now in Gebeng. The harm to our land and the future of our children is happening right at this moment in this beautiful country.”“No one should tolerate this further and this signature campaign must be carried out in the most intense manner,” said Wong Tack.Pilihan di tangan kita!Steering Committee of Himpunan Hijau————————————————————————–
Members of the Himpunan Hijau steering committee :
Wong Tack (Chairperson), Andansura Rabu, Bang Seet Ping, Clement Chin Yee Kaing, Lee Chean Chung, Nasrun Amir, Ooi Boon Seng, Dr.Phua Kia Yaw and V.Arumugamemail :himpunanhijau@gmail.com
FB : Himpunan Hijau 2.0 : Langkah Lestari

4 Responses to TARGET REACHED! The ‘Bury Lynas with 1,000,000 signatures’ Campaign